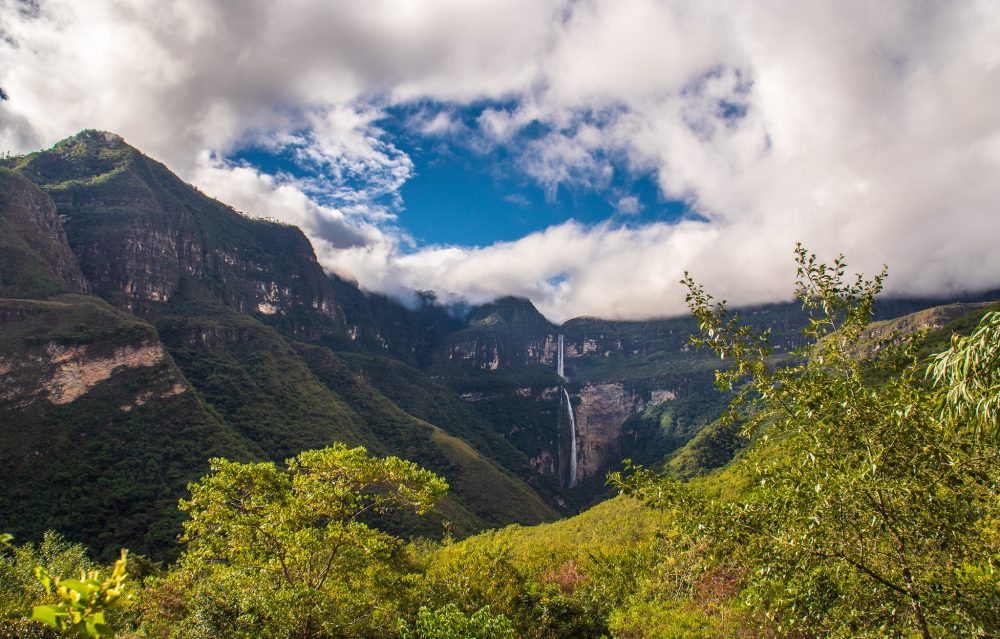 Not being woken up by a screeching rooster is a treat! Bird sounds and rain drops are all you hear here at Gocta Natura Lodge. The five cabins around the main house are far apart and every one has complete privacy. As we were occupying four of the five cabins, it felt like we had the place to ourselves.

All cabins ate very tastefully decorated with so much attention to detail that we constantly are finding small things that delight us. The welcome bowl of chocolate covered strawberries, the stone tiled bathroom with a hot rain shower, a series of pillows on the bed for every liking, home made soap, or fresh flowers in the bathroom. This is such a contrast to all the other places we stayed at that it nearly makes one feel guilty. This is the opposite of roughin’ it!

Breakfast was just as yummy as the day before and everyone ate way too much. Fun fact: we drank so much coffee, that Rocio had to get more (fun fact 2: There was no Gin & no Tonic left after the second night).

Today not all of us felt like another hike, so while Leslie, Jiho, Hary and Esther decided to hike to the upper fall, the rest of the crew had either a leisurely day or was busy filming and droning.

The hiking party stuffed snacks and rain gear into small packs and off we went with two mototaxis. Mototaxis are the cheap alternative to 4WD cars. A refurbished motorbike that served as a trike has a small bench in the back and some sort of roof over our heads.

It rained a bit this morning, so the 20 minute drive was windy and wet. We had to get to the opposite side of the mountain and up the hill to a small village from where we started our hike. We all suited up accordingly and the clouds were low and heavy. Not much of a view so far, but at least it was not cold rain.

It took us about 2,5 hrs to reach the middle of the two falls. The hike was much easier than the one yesterday and we made good progress.

Arrived at the middle section of the falls, you can climb up a steep, wet, wooden ladder to the base of the first fall. The amount of water coming down has doubled since we arrived in Cocachimba. Four large courtains of white water were cascading down the sheer drop of about 200 meters at least.

The sound was deafening and the spray was everywhere.

The volume of water coming down was massive. After navigating down the ladder again, we then made our way to the edge where the upper fall ended and the water drops down a spectacular edge, creating the lower falls.

The scenery was very picturesque, the rain had stopped and even blue sky started to appear. We all had a hearty snack of goodies, from beef jerky to walnut salami, from fresh apple slices to sweet potato bread and set out to head back at a brisk pace.

Soon the sun started to appear and we walked most of the way back in sunshine.

After 1,5 hrs and beautiful, sweeping views (which we hadn’t seen when it was drizzly and cloudy on our way there) we arrived back at the village plaza.

It was a wonderful walk and we enjoyed it immensely. And what was just as good was the late lunch that was to come back at the lodge! Sally and the Gocta Natura team were busy again!

Roasted chicken with fresh vegetables in a red wine reduction! We all could get used to this food on a permanent basis – no problem!

While our hiking party was busy hiking, our two teenagers, Siobhan and Kat were busy chilling, Chris R. was lounging, Chris O. was droning and filming and Sally was cooking.

Everyone was happy and the afternoon was spent relaxing, having hot showers and writing blog entries. This time we have the help of our team guest bloggers Sally and Leslie.

While Jih-Ho is providing Chris O. with some great shots for our blog. 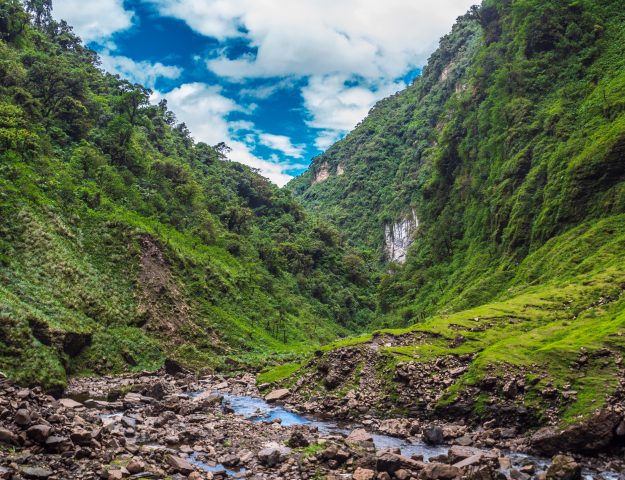