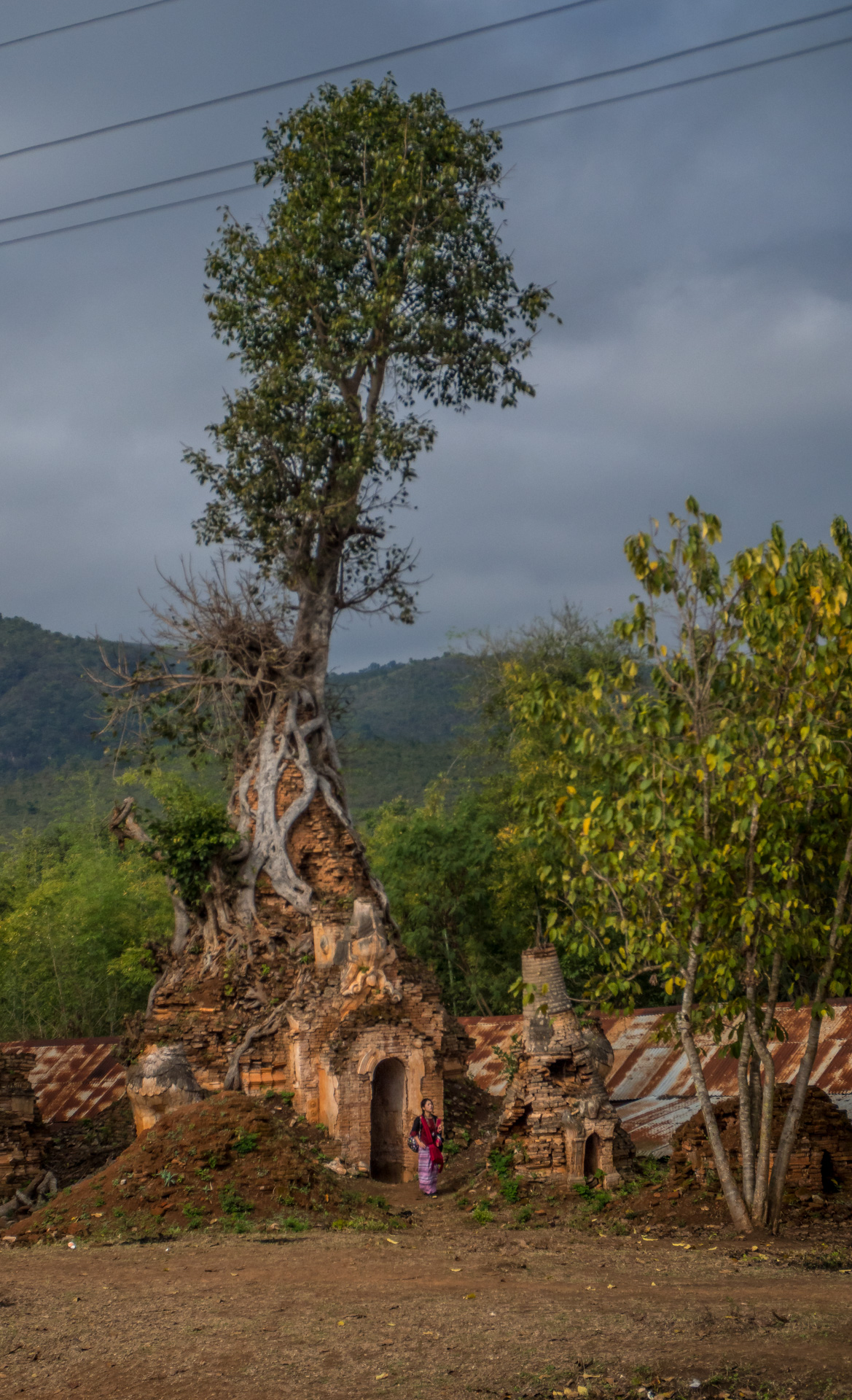 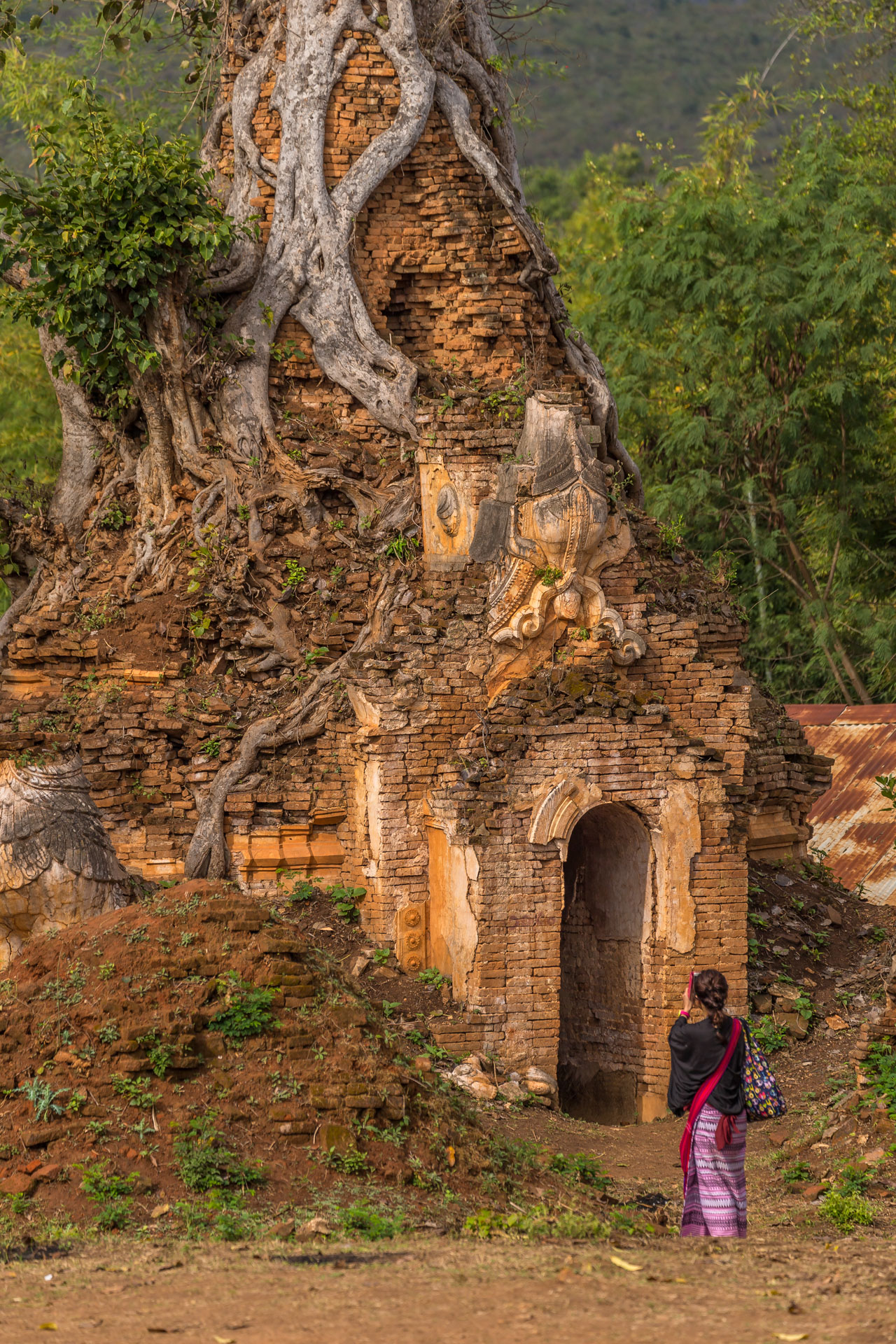 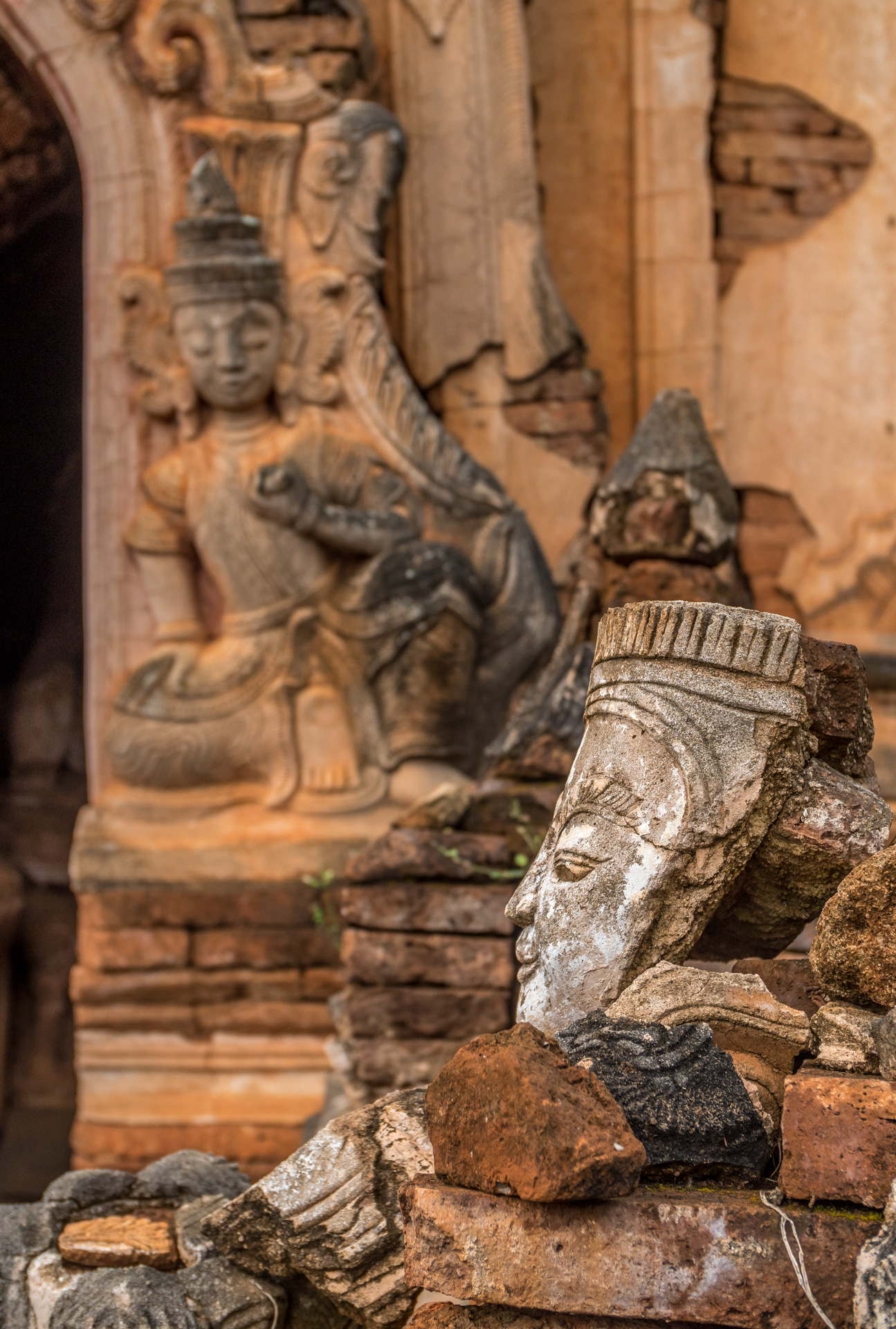 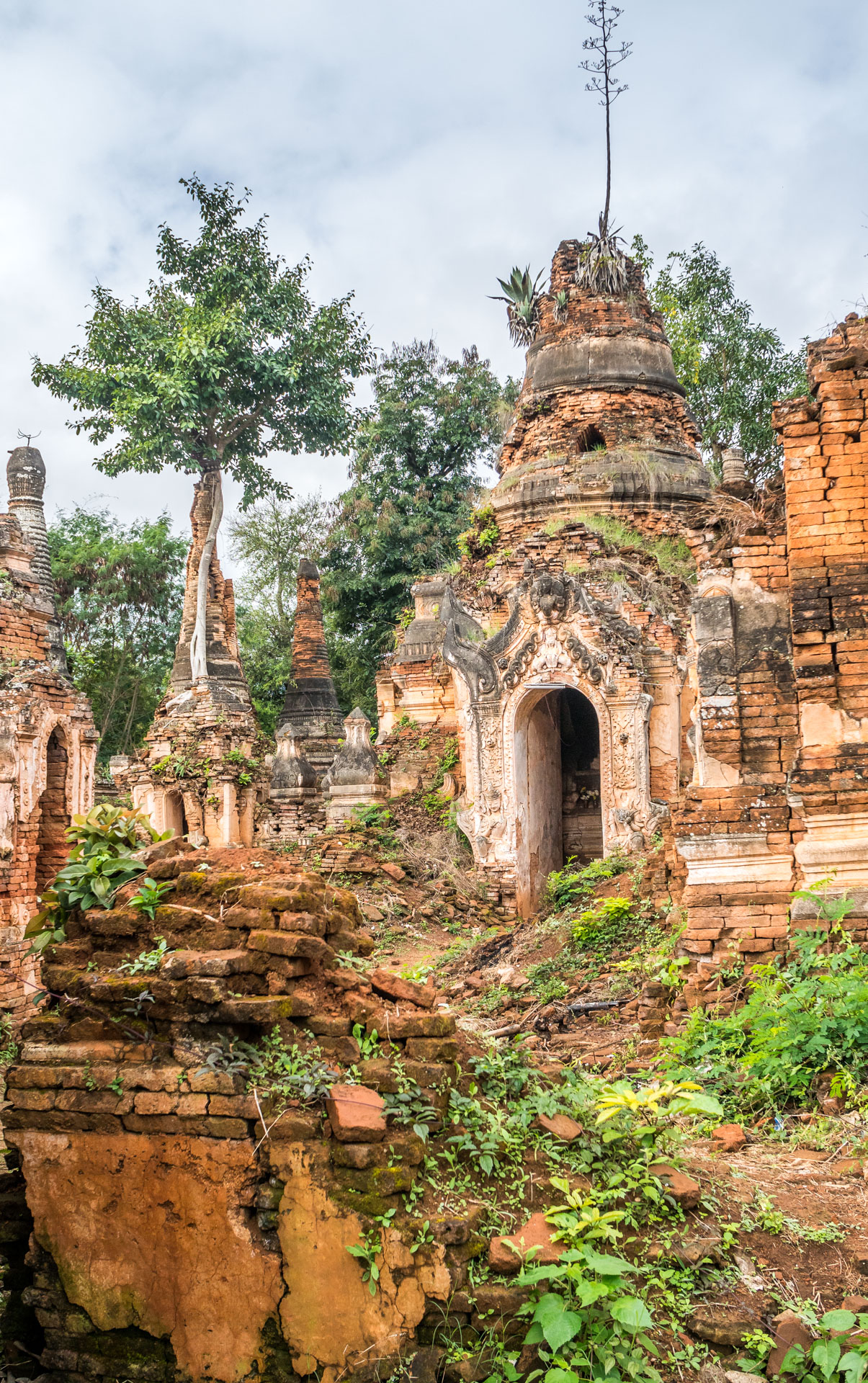 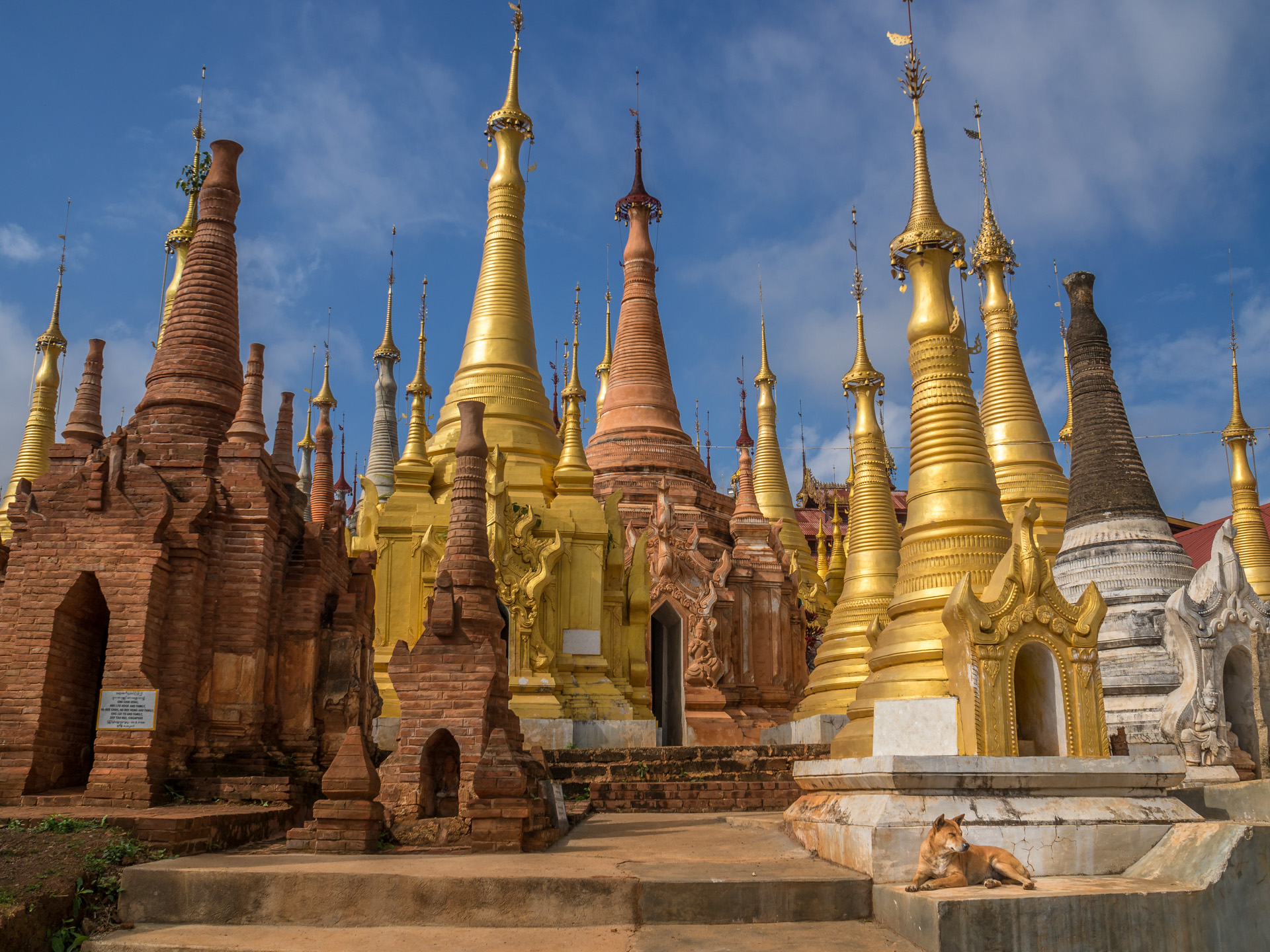 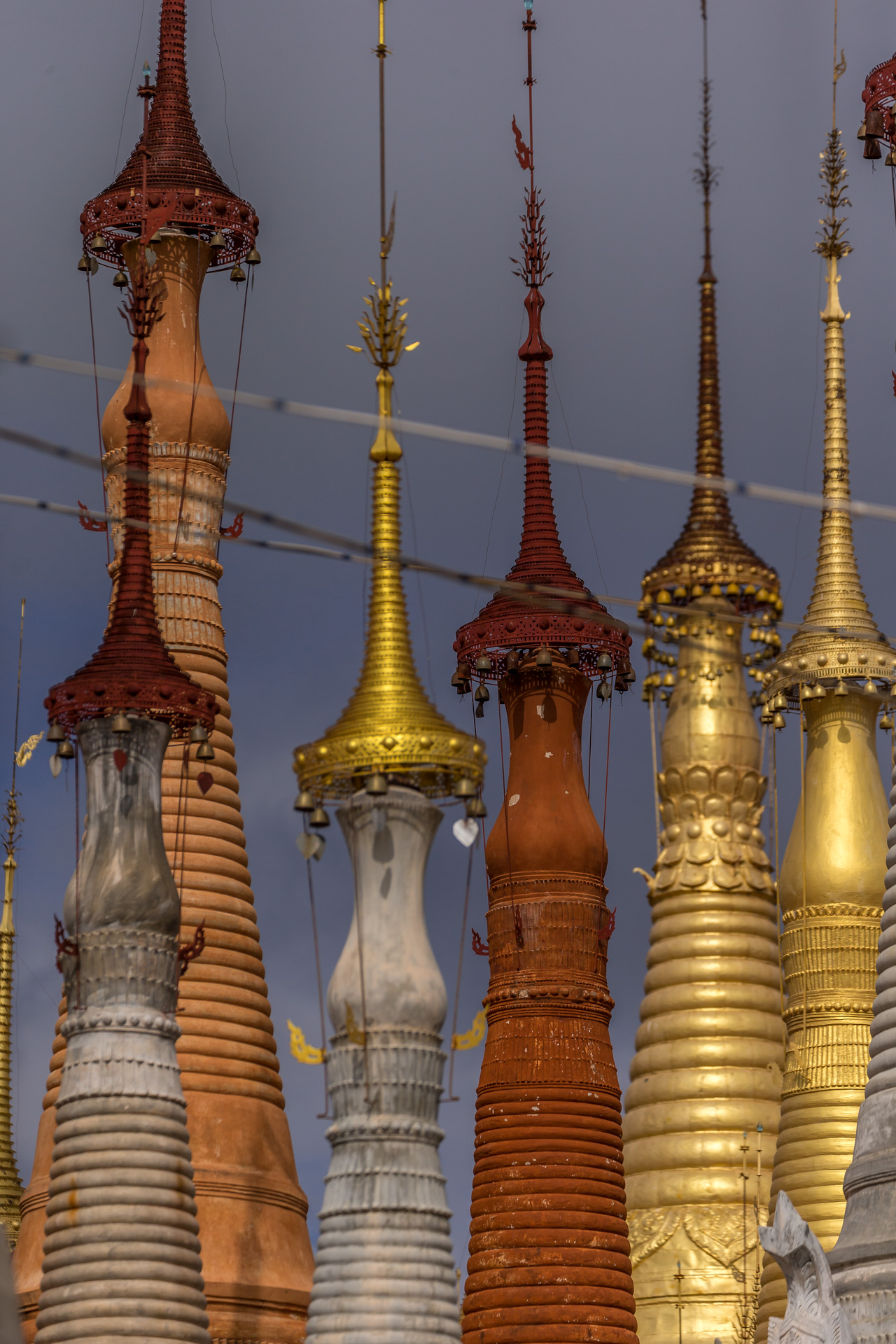 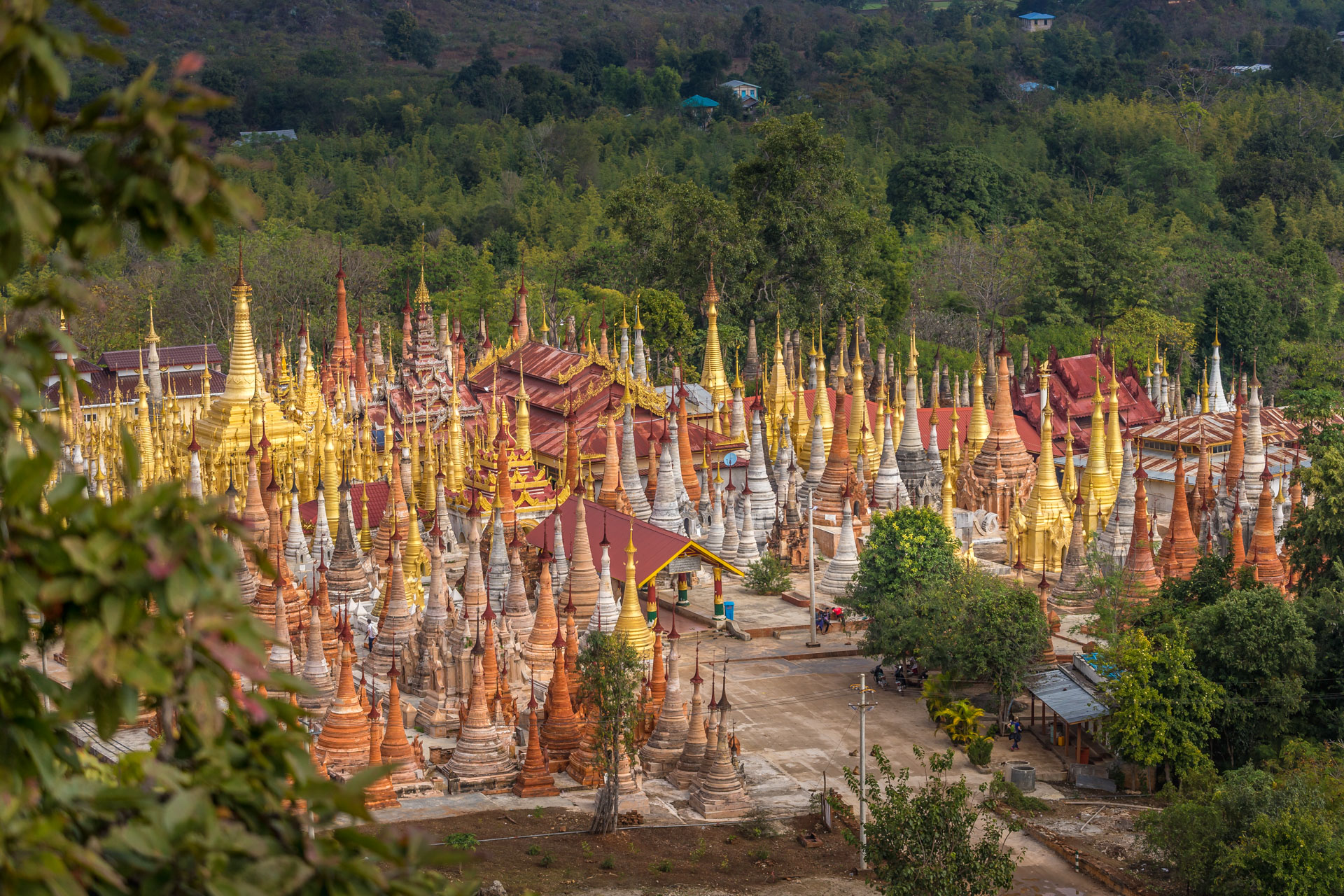 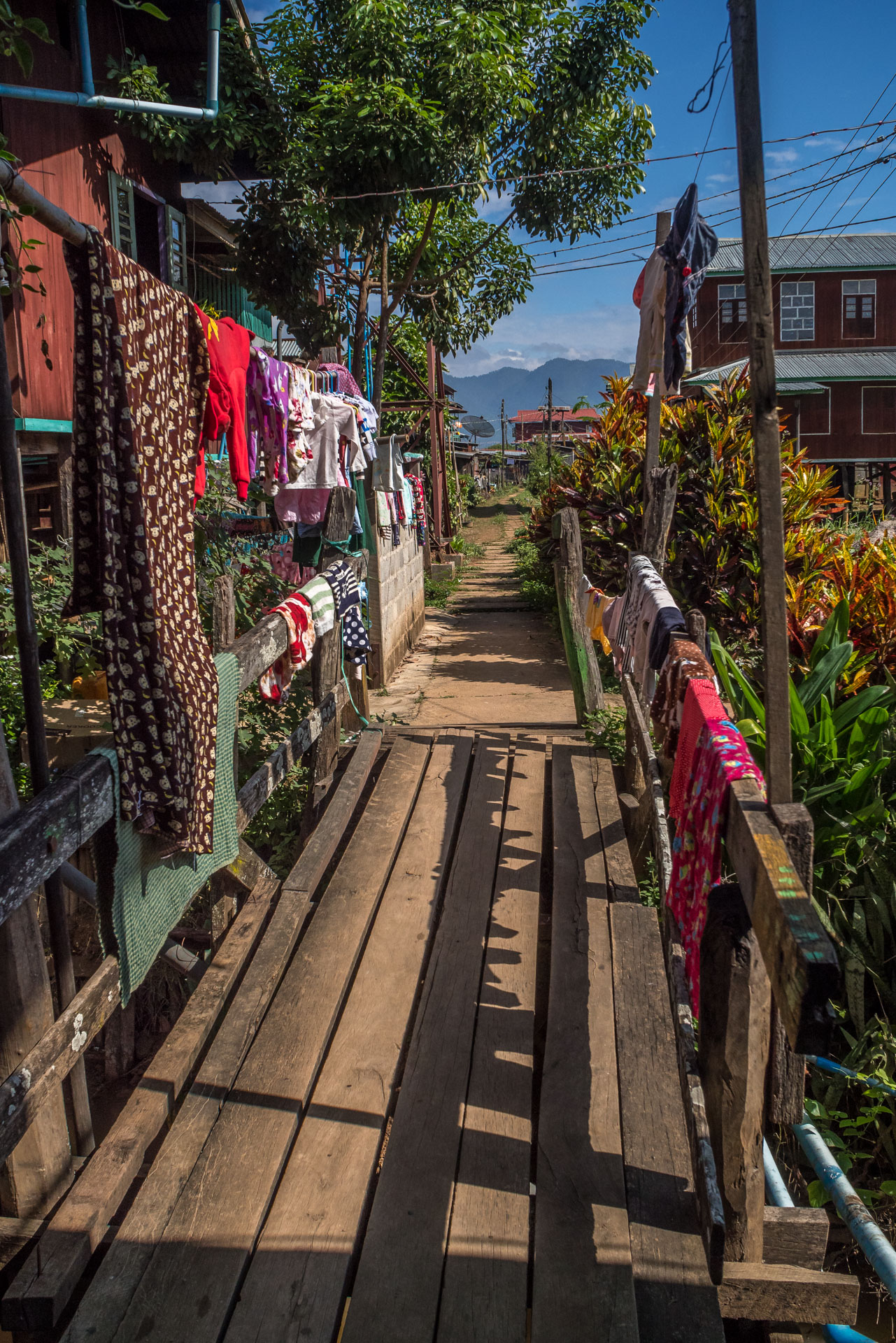 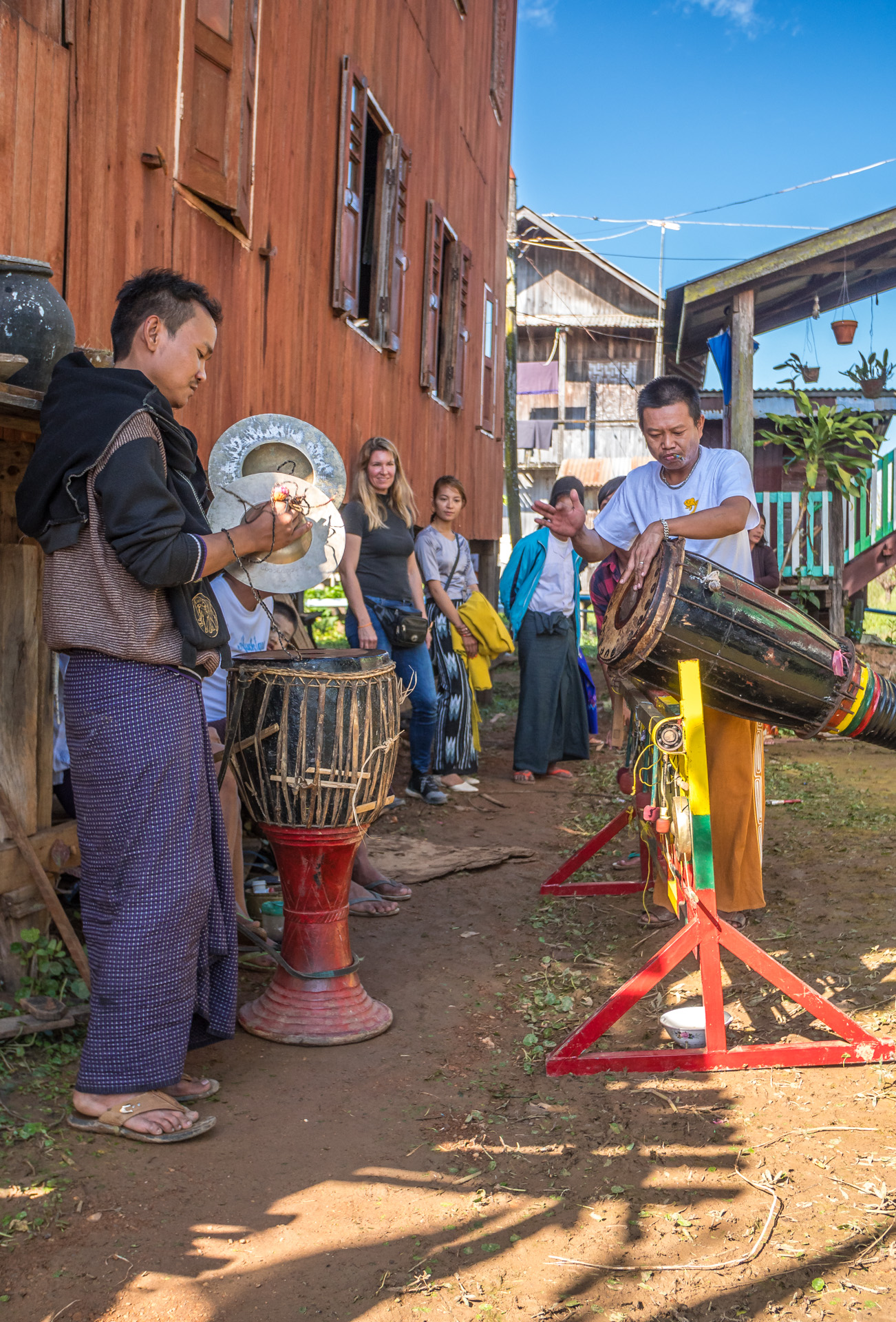 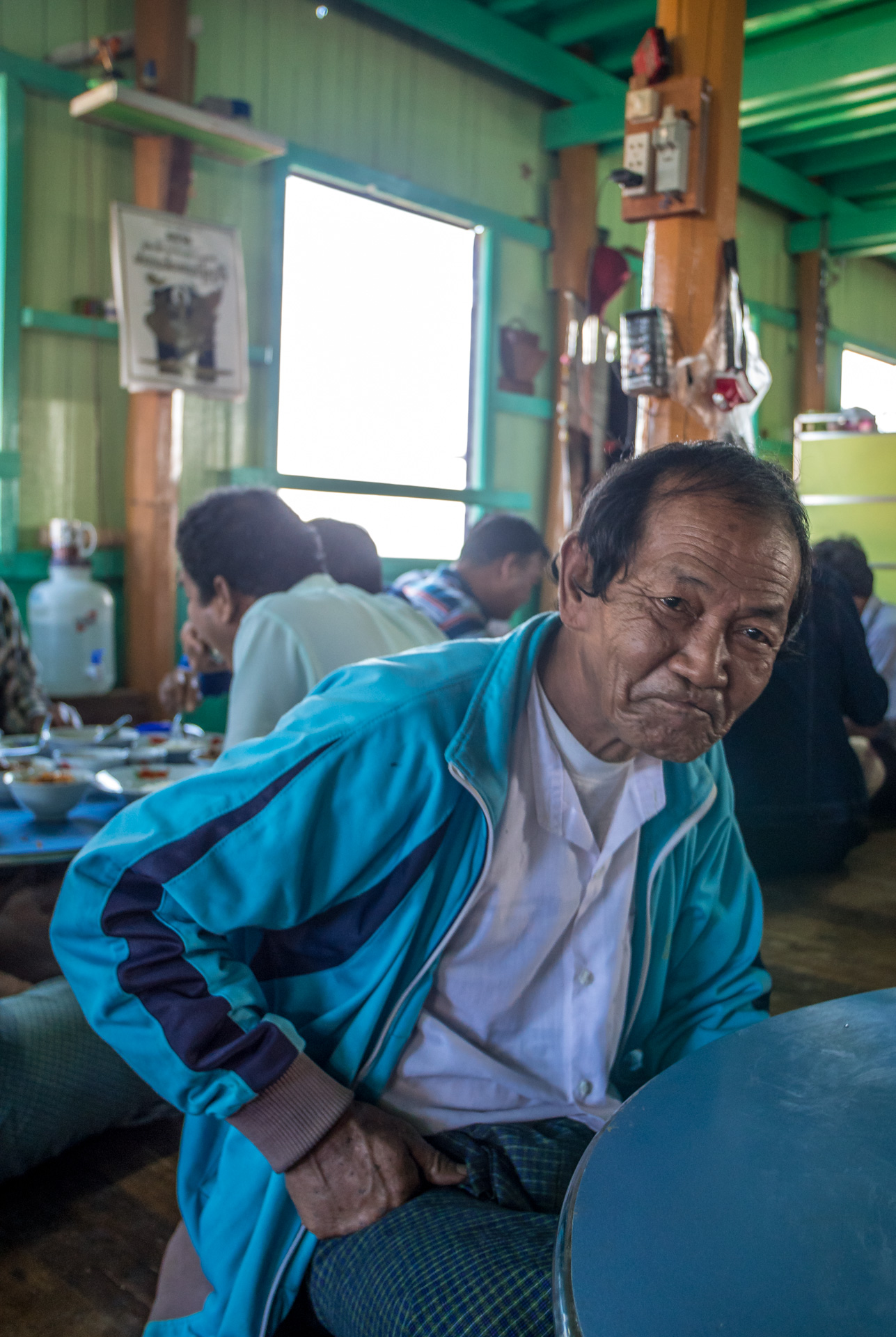 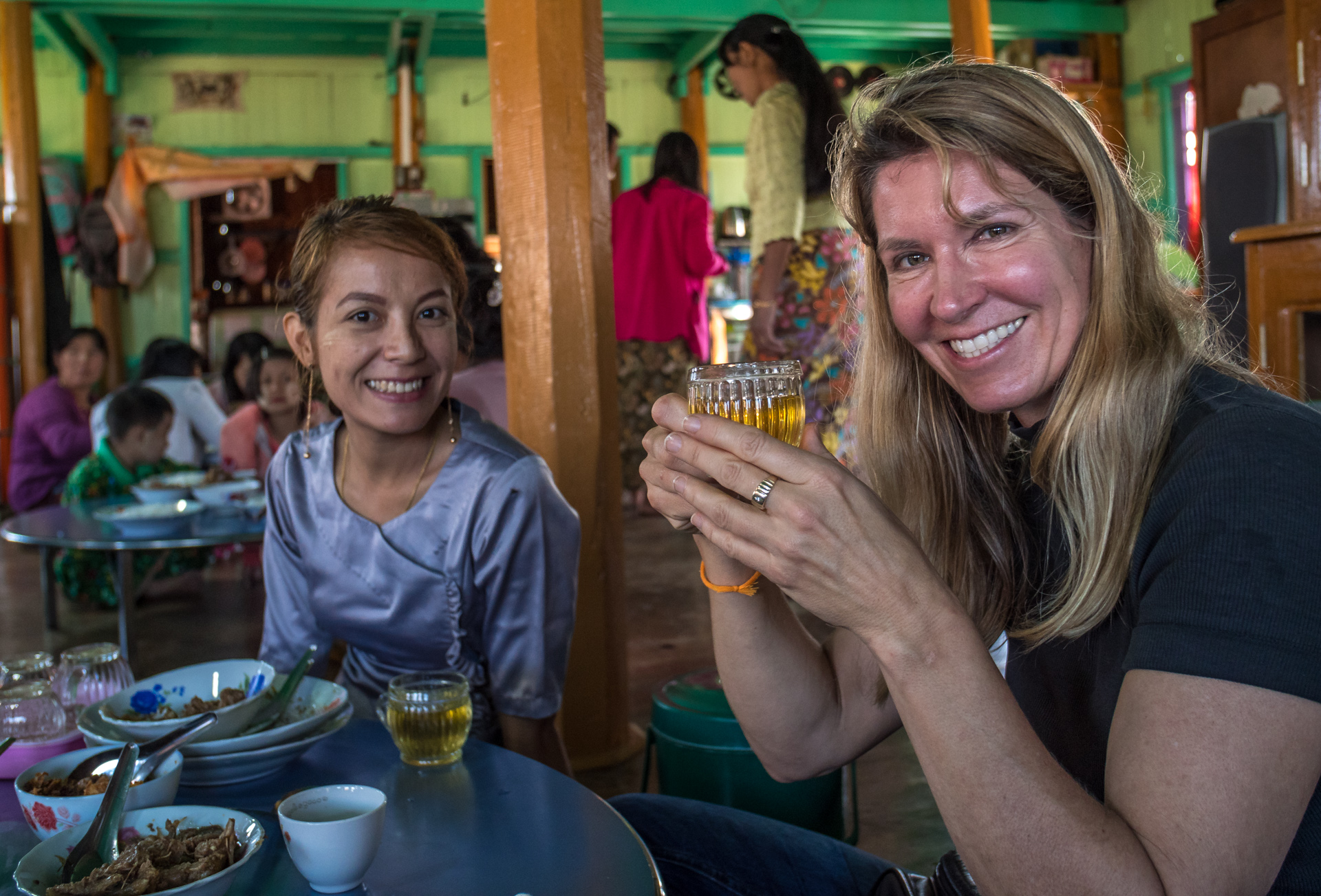 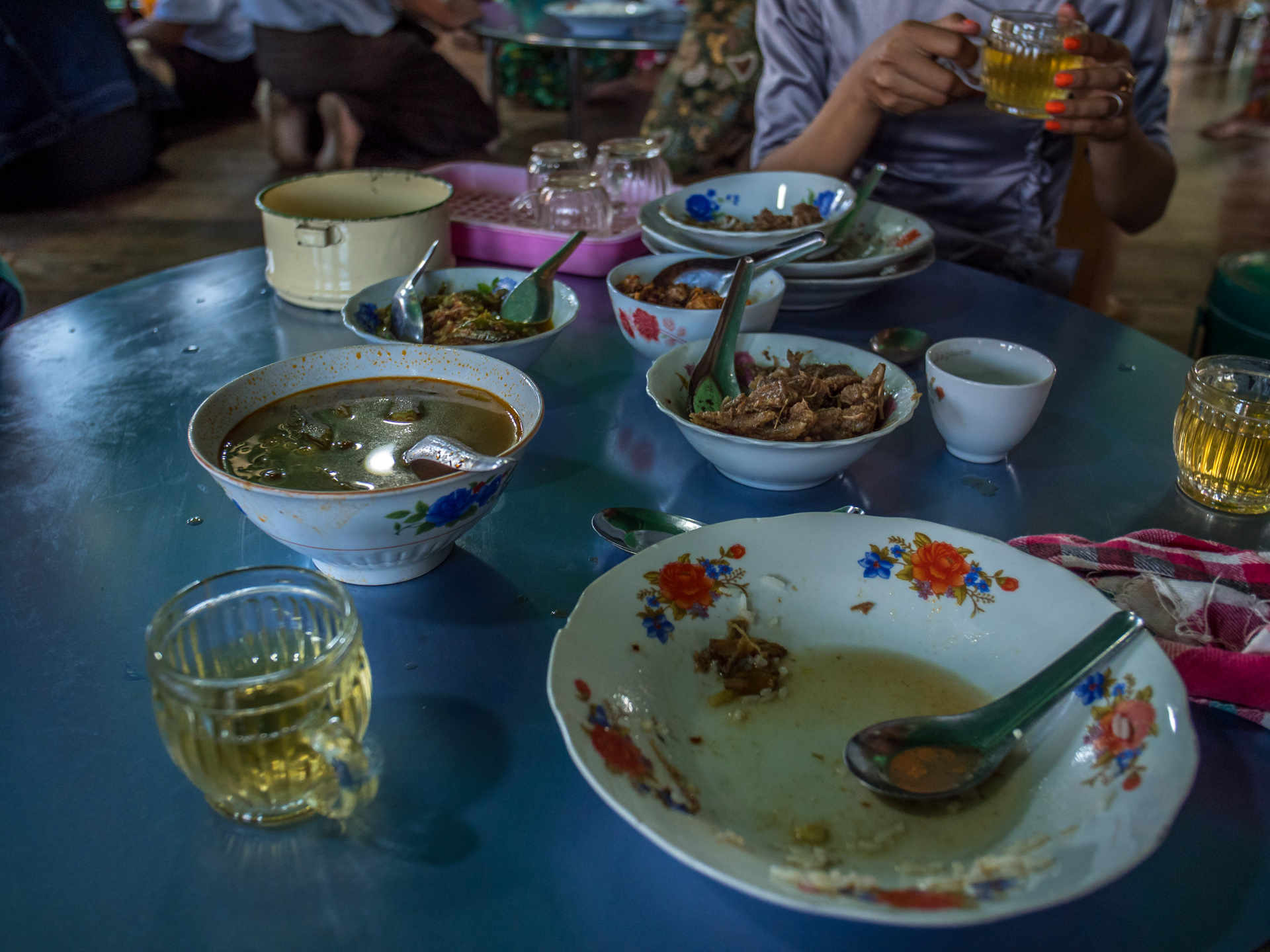 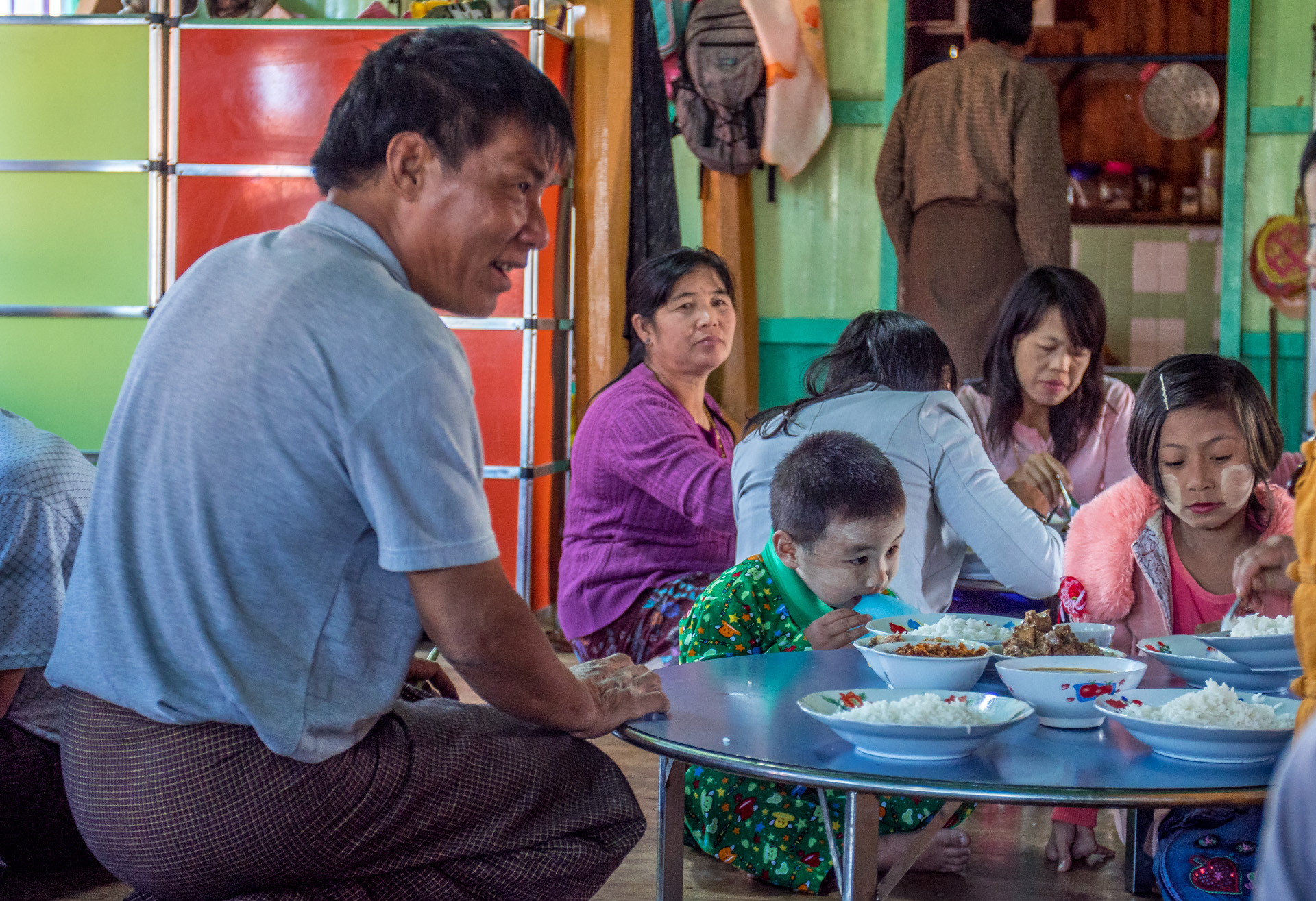 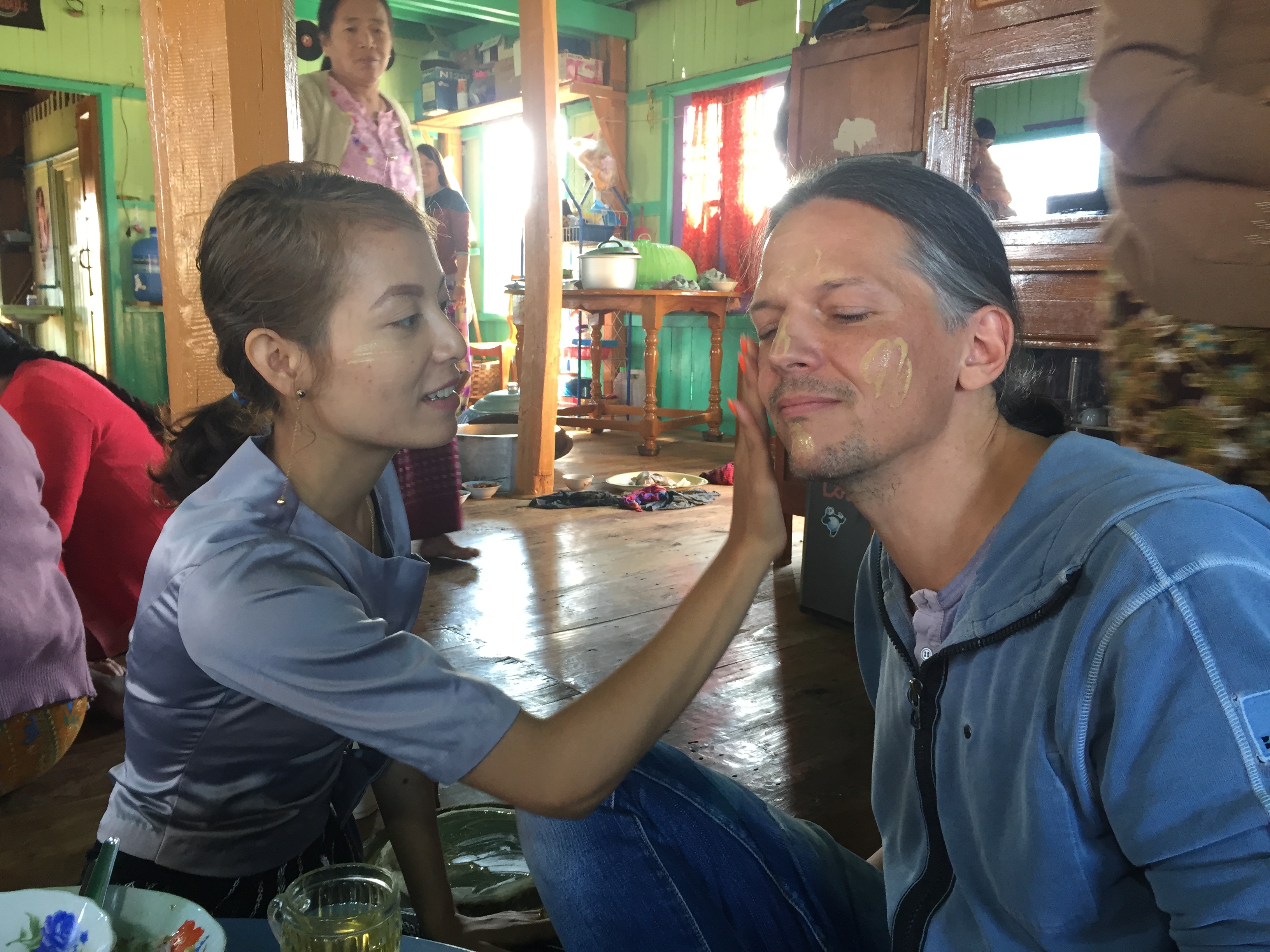 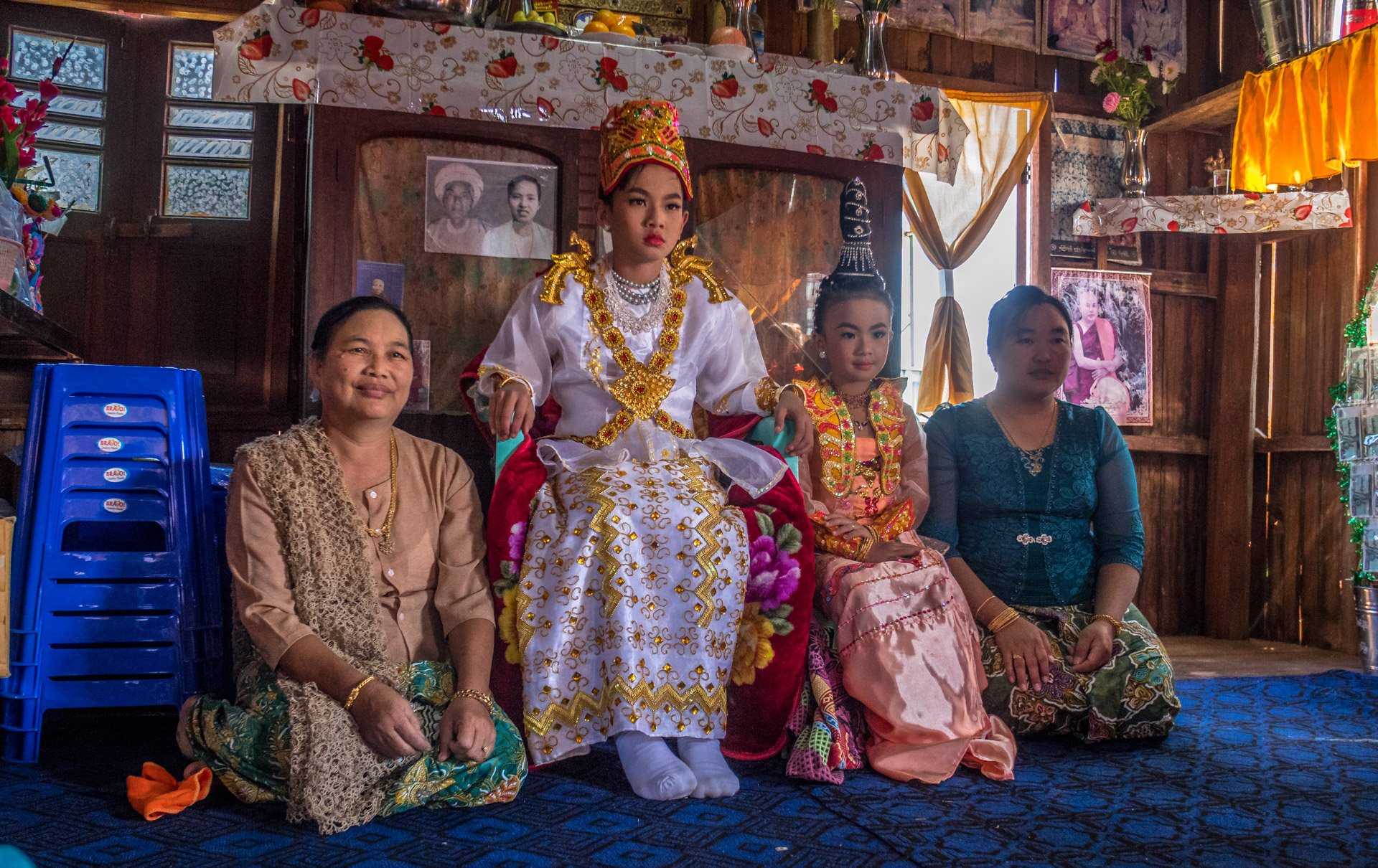 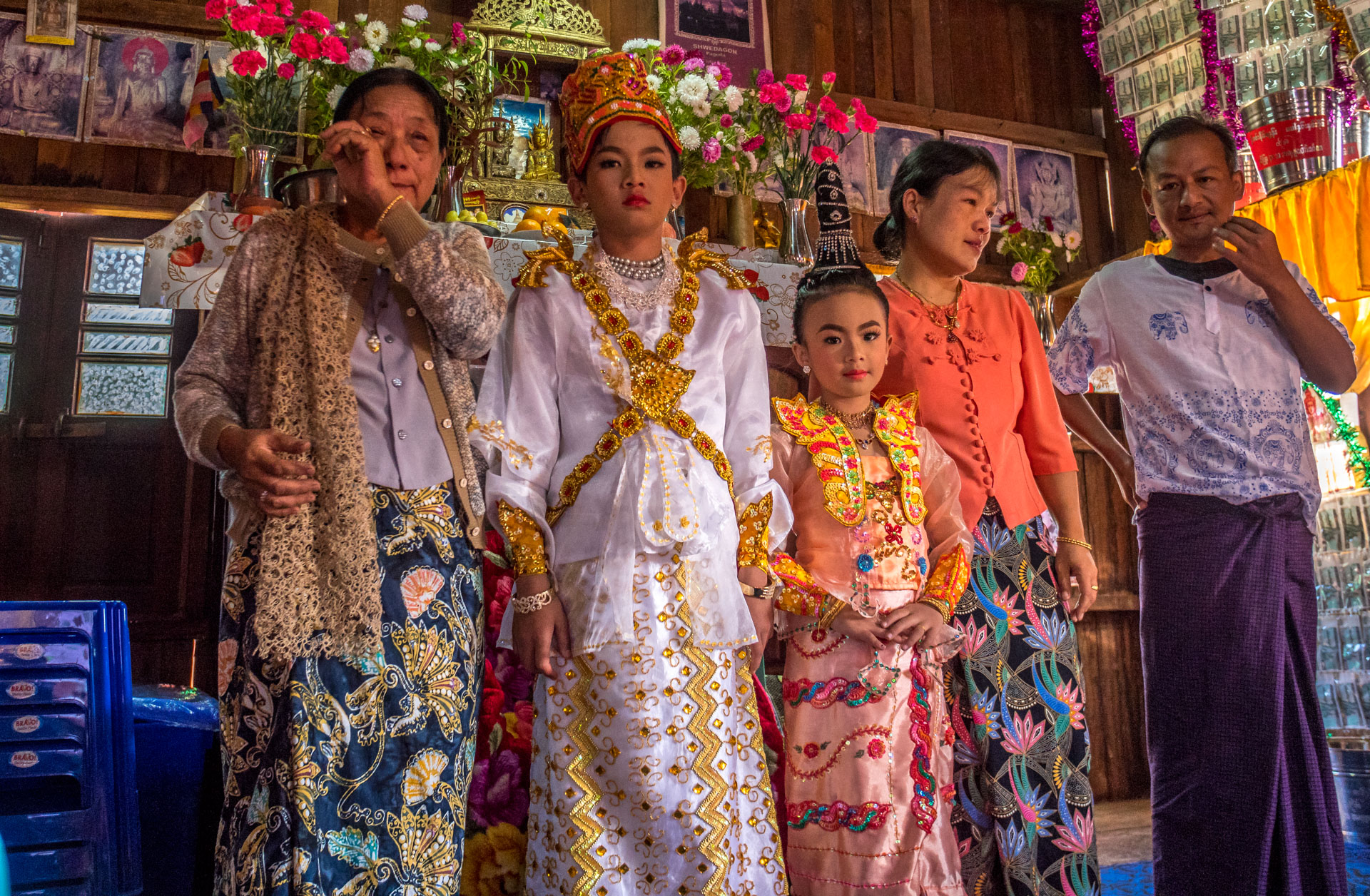 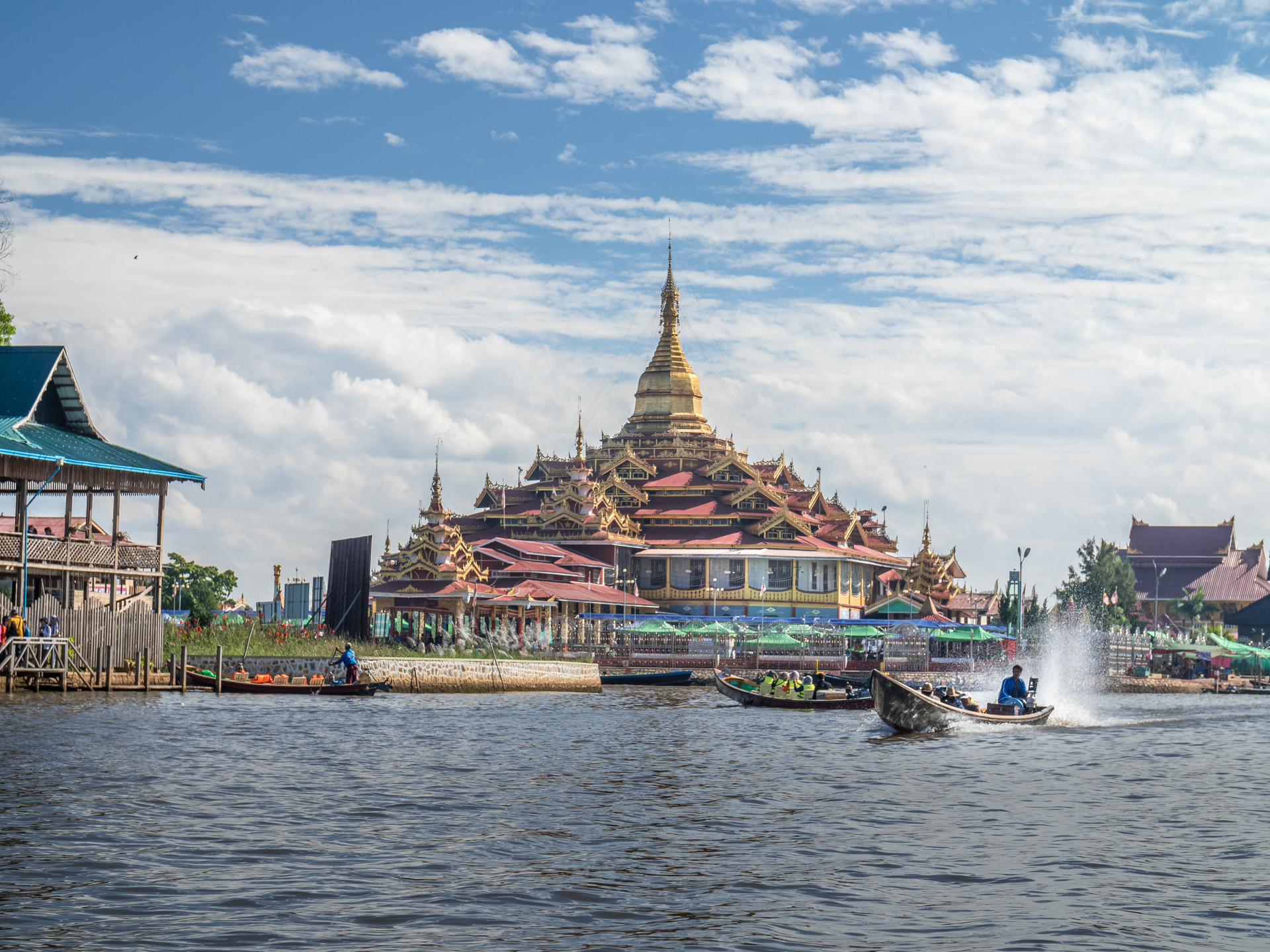 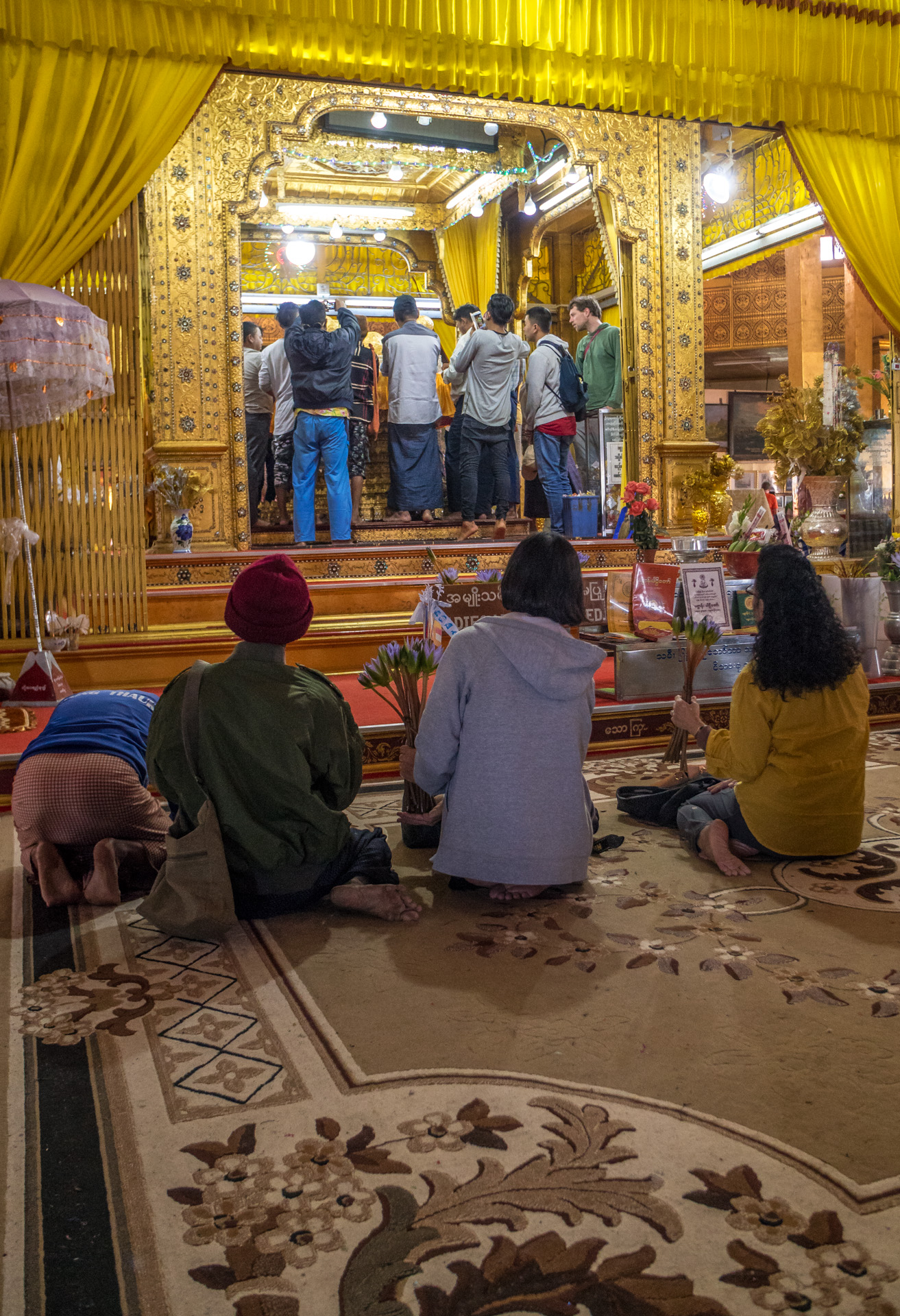 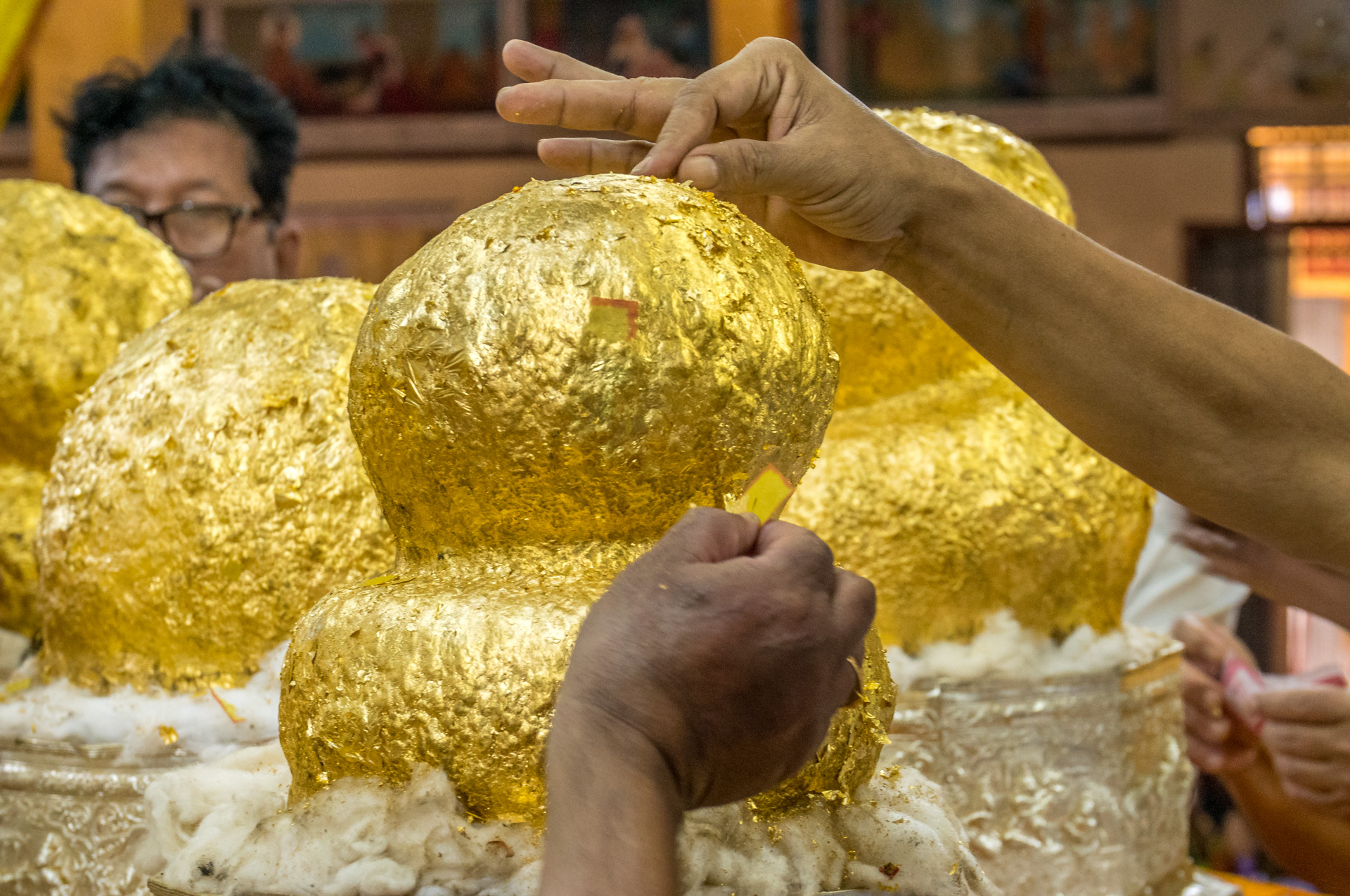 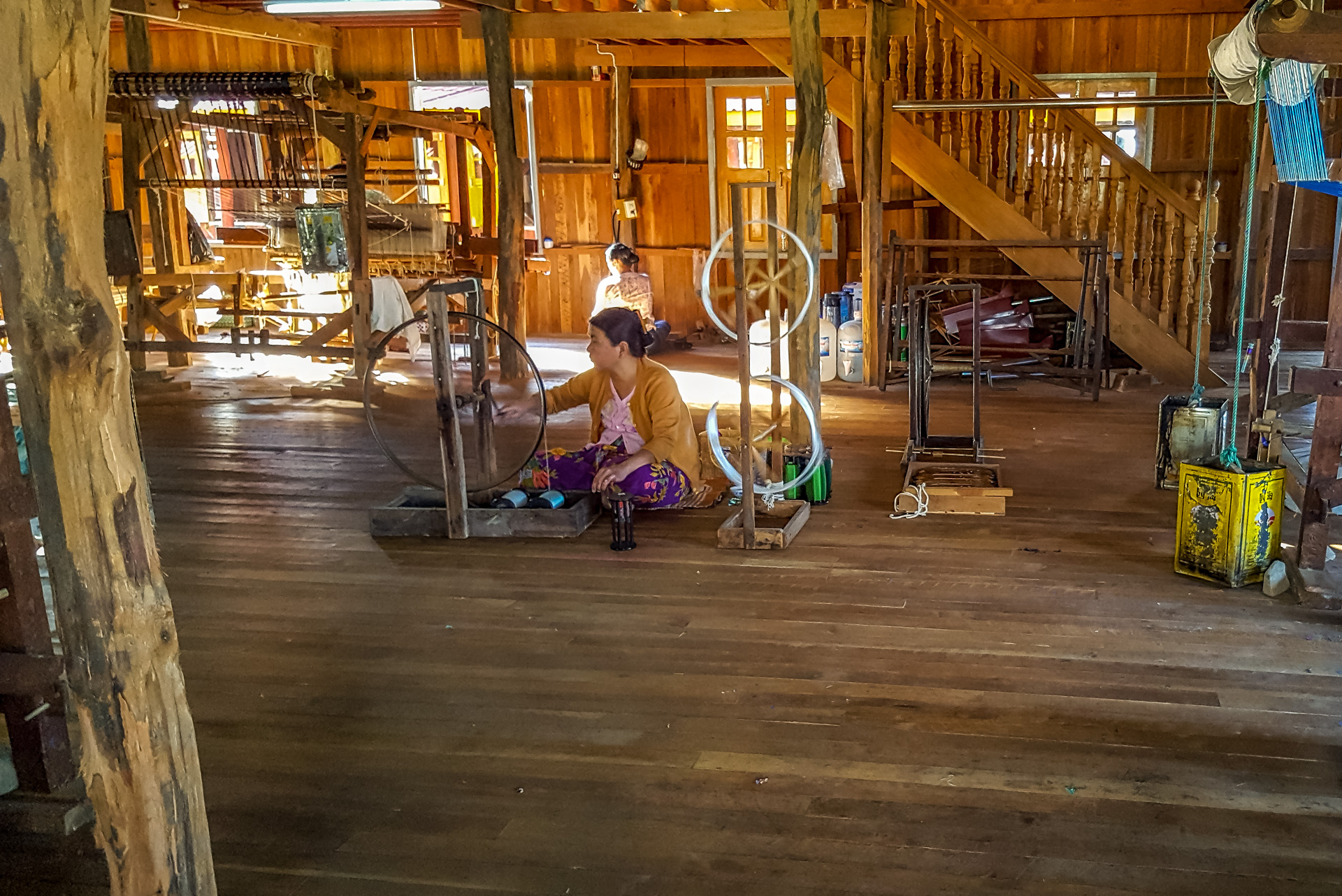 Today we took an early boat to Indein village. Indein is fully accessible by boat through a long narrow river that is one of four feeding the lake.

Indein is famous for its 1.054 pagodas, all cramped together in one small area. It’s a magical place. As we were very early, we could wander around the ancient pagodas by ourselves. Many of them have not been restored yet and trees claim some of them. Others have been restored to their old splendour and the view from above across many golden tops mixed with white and brick is simply breath-taking. According to history, the white elephant of the king of the Shan state stopped here and that’s where all those pagodas were built. Influential courtiers of the king have erected those pagodas and still many of them bear their names on plaques outside.

Of course, like everywhere else in Myanmar plenty of cats and dogs everywhere to be seen, but they are all friendly and luckily don’t bark in the night (hear us Bhutan?).

Once we made our way down the hill, we already saw groups of Asian tourists shooting in full force every typical (and posed) image the can think of. We found the picture of them more hilarious than the actual photo target…

Next was a little fishing village called Ywama, that also specialized in silver smiting. Needless to say, that Esther of course found some earrings to add to her collection and haggled for a good price. Deciding on an impromptu walk around this delightful village behind the silver smith’s place, we heard some traditional music and followed its sounds. A whole group of villagers were gathered around cooking pots and pans and invited us to join them for lunch. Chicken and fish curry with rice and soup. We took our shoes off and sat down with the village elder to eat with them. Luckily, we had our translator with us and as soon as we told where we are coming from, inevitably the word ‘Bayern München’ is mentioned. I have to say whatever branding our soccer club does, it’s even reaching far flung Myanmar. Burmese people love soccer and if they know one thing about Germany that is FC Bayern München!

Since Chris had forgotten to put sunscreen on our guide Aye Myat proposed to put some thanaka on his face. Every family here has some at home and so it was quickly prepared and applied. Thanks to the Thanaka he didn’t get sunburned and the local people smiled and waved even more often seeing him like this.

With the help of our wonderful guide, we found out that the reason for the village gathering was the initiation of two of the villages children into the nearby monastery as novices. The two were made up like a little prince and princess and donations were collected on their behalf as well as everyone saying farewell to them. It was both moving and heart wrenching to watch the whole family in tears and so proud of them and thinking that becoming a novice at this young age  and live in a monastery must be really hard. The boy was eleven and the girl was just seven years of age.

When we asked if it has been decided that they will become future monk and nun they told us that no it has not been decided and it seems that not all novices go on to be a monk or nun. There is a kind of testing period.

It was a very memorable and moving experience to watch that family’s farewell ceremony. We did our good deed and donated of course as well. As tradition demands it, we got little `presents´ in return: a handkerchief and some sweets. The real gift to us was the invitation to this ceremony. When we arrived at the Phaung Daw Oo Pagoda we could both ring the big bell three times (a custom that when you have done a good deed, you ring the bell three times and let everyone know and participate in the good deed). Actually, a very nice custom. Makes everyone here feel happier and reminds you to do so too – in case you might have forgotten it that day.

This big Phaung Daw Oo Pagoda is built on over 600 teak wood pillars in the middle of the lake. Many local worshippers come here and apply (again: men only!) gold leaf to five small buddha statues. There is a big ceremonial boat that is used once a year for the big pagoda festival around the lake is gently moving up and down inside a very large boat garage. It’s all gilded with a bird’s head and tail. The five little buddhas are being put on the float and the float is being pulled by boats rowed by 100 men around the lake. Each village then gets to pay their respect.

Speeding across the open water stretches of the lake and then drifting slowly through the vegetable gardens as well, makes for a very relaxing day on the water. Last of the handicrafts we saw was an Inle lake specialty. Thin lotus stem fibres are being pulled and rolled into thin and very precious thread. Per day one worker can only produce about 15 meters of lotus thread. For a small scarf you will need up to 6.000 lotus stems! It is very highly regarded and expensive. It gets woven into shawls, blankets, ties and scarves. Often mixed with silk. Its only sold and worked in one colour, mostly in its natural beige, so the silks used with it make up for a more colourful picture overall. 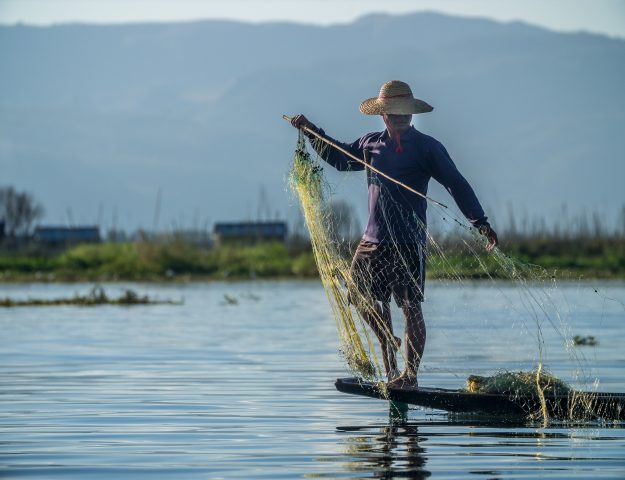 Inle Lake – the Venice of Asia