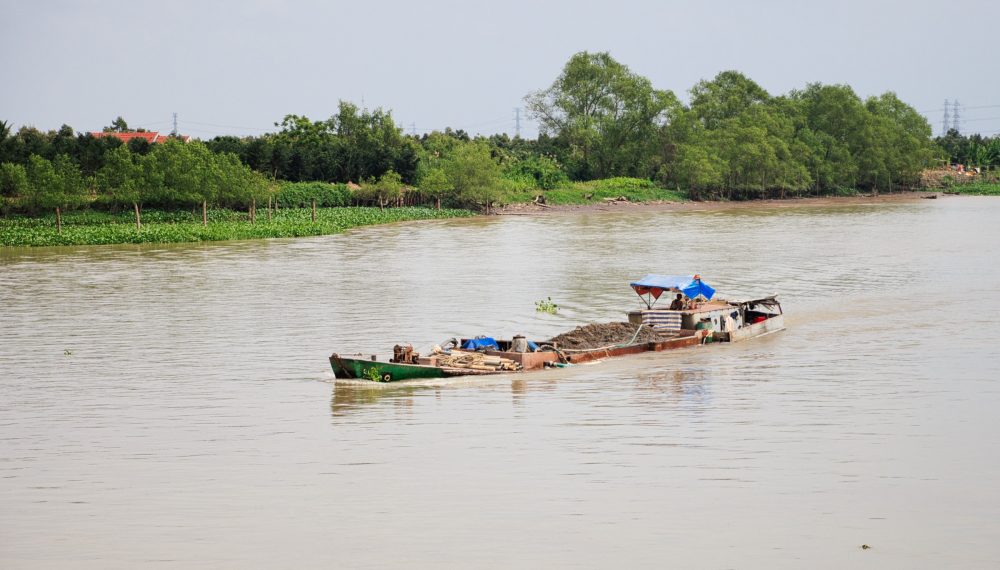 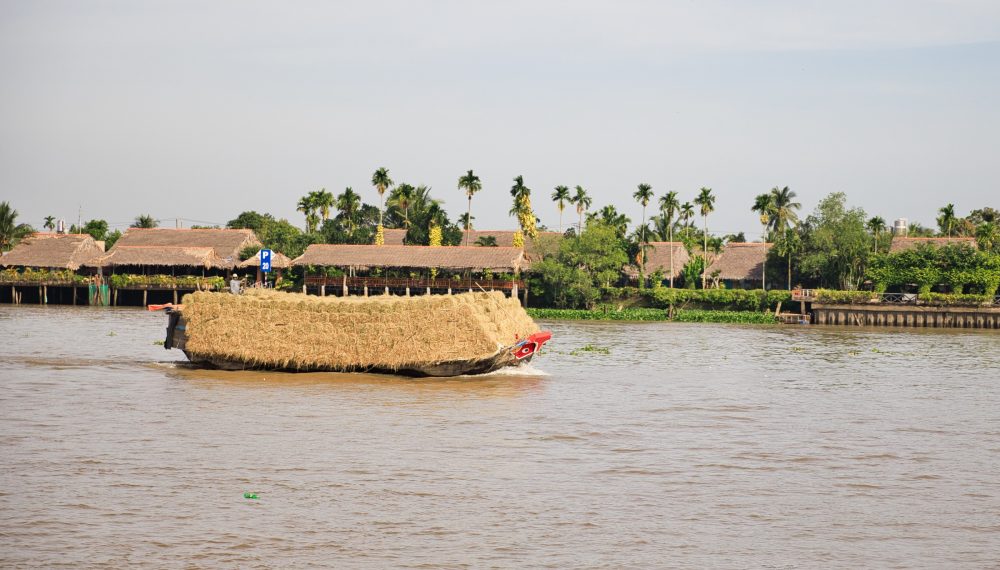 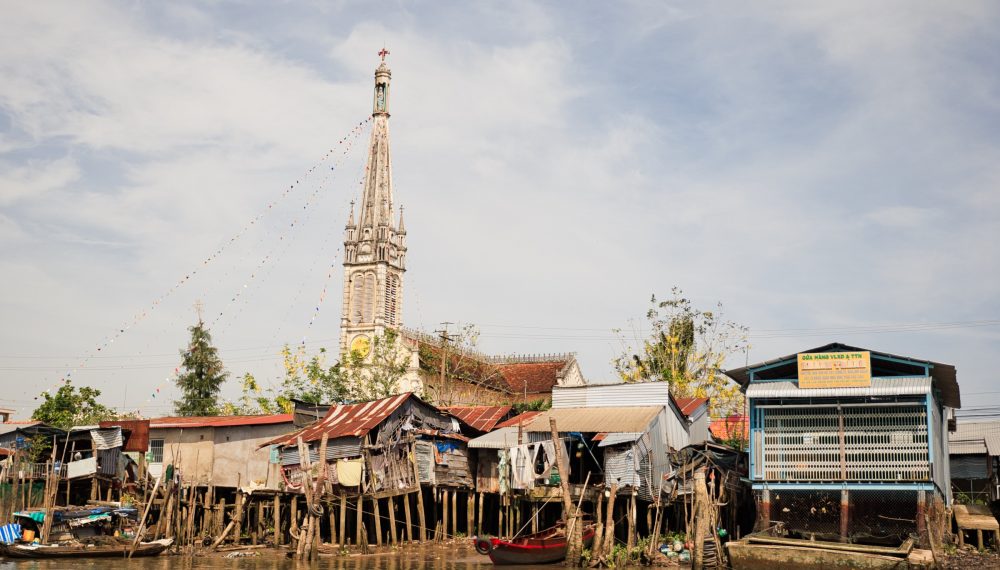 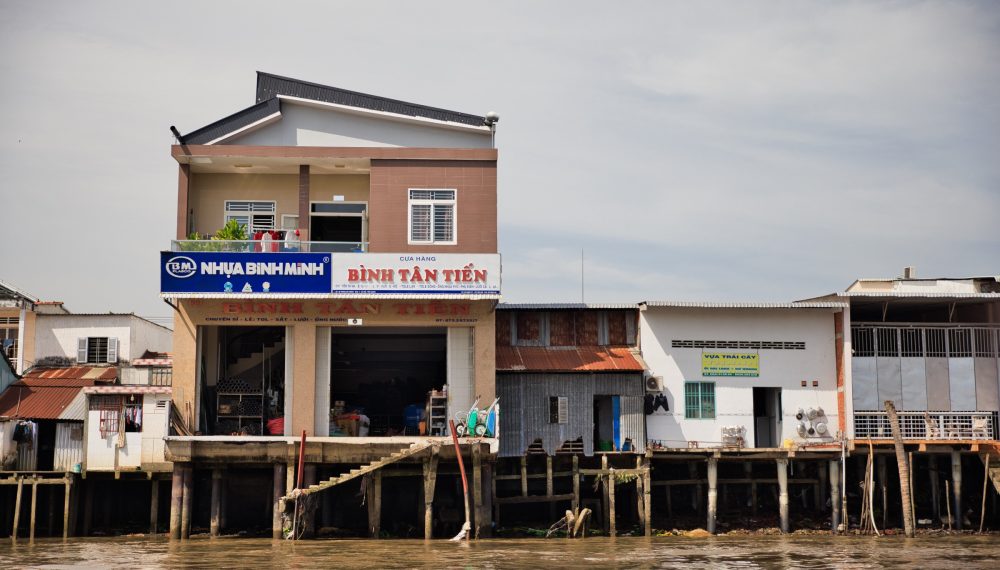 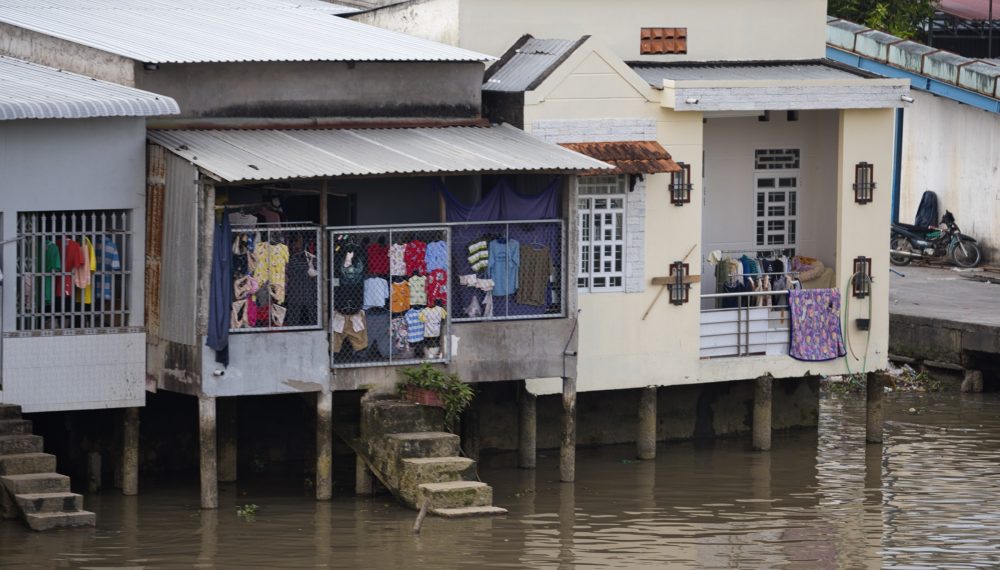 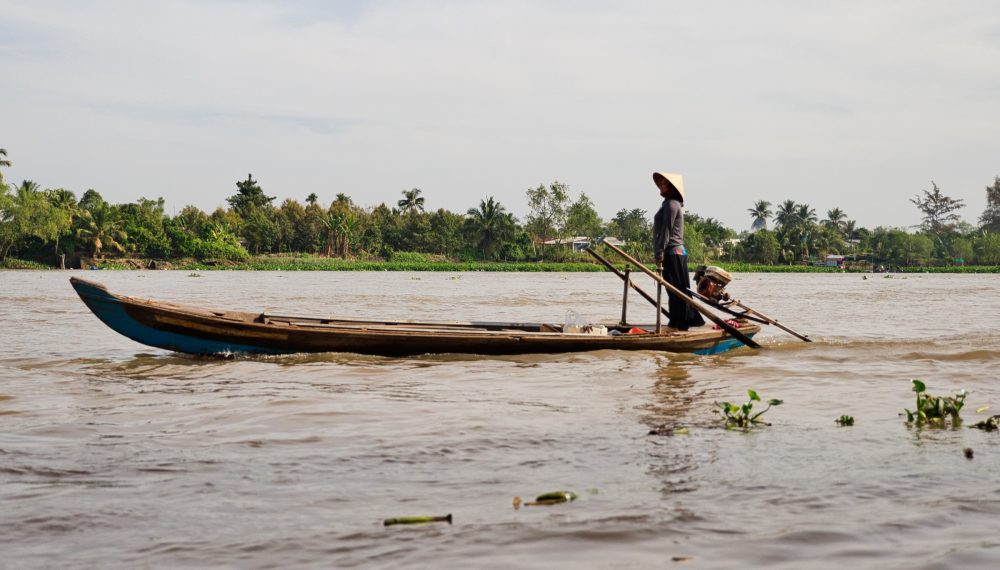 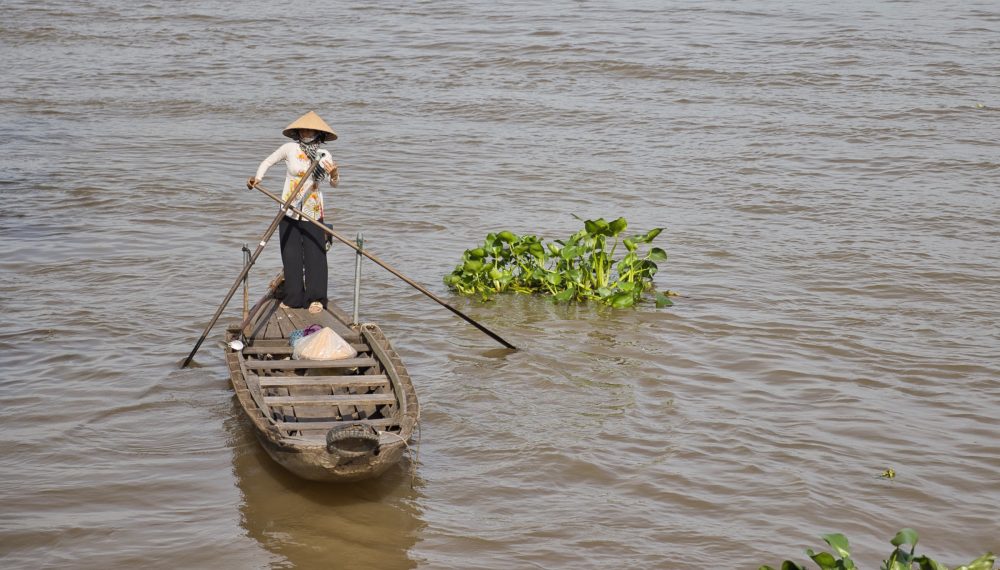 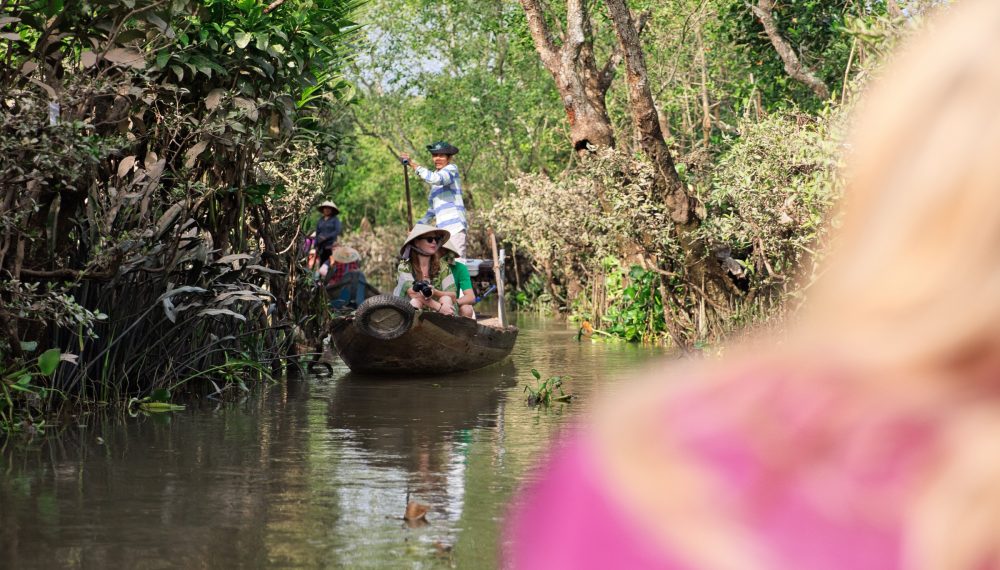 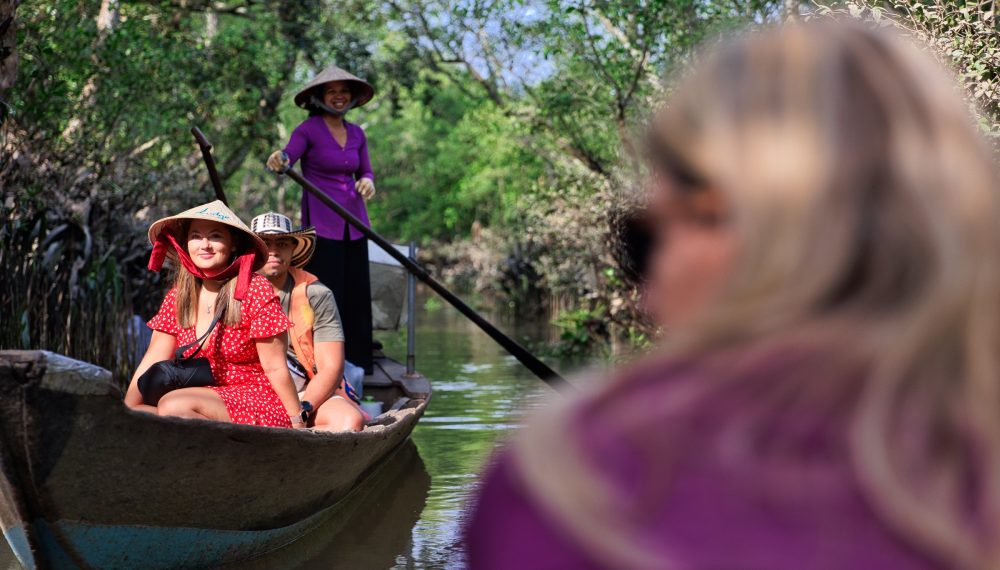 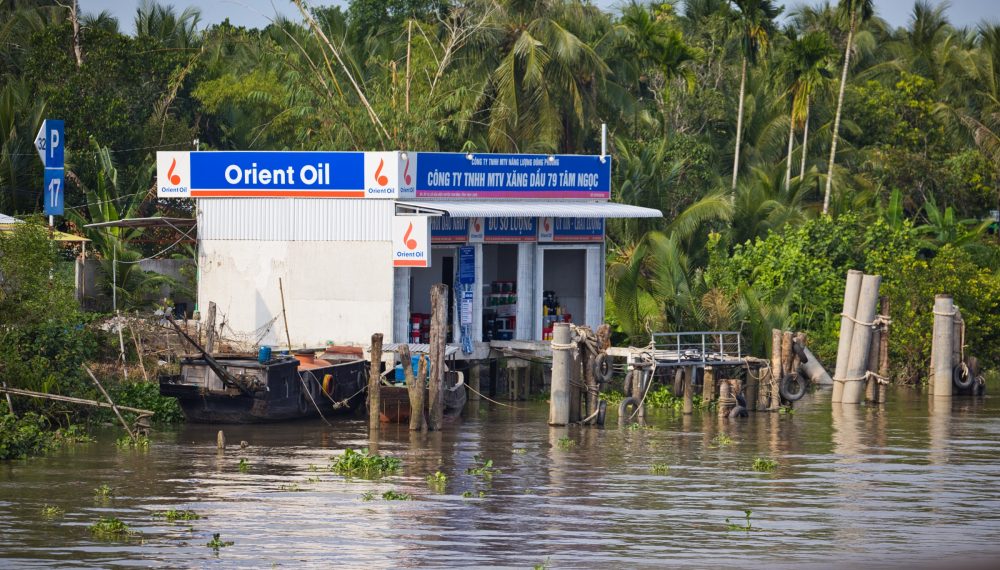 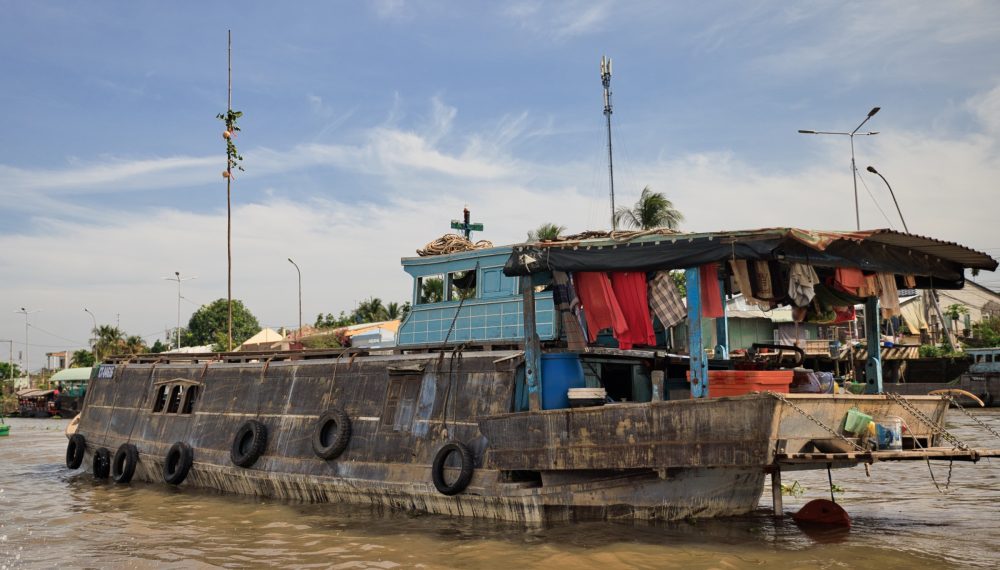 On Dec. 24th (Christmas Eve) in Vietnam we just leisurely hang around the boat and did some excursions. In the morning we set out on a sampan (a small wooden boat that is mostly rowed or has a small motor) to explore some small side canals too small for larger boats. We saw an equal number of men and women rowing with two passengers per sampan.

We made or way through small waterways and saw weird looking stalks. We weren’t sure if those were roots growing up from the mangroves or small trees trying to make it into a larger tree (anyone?). It gave the canals edge an eerie look in any case.

The water in the Mekong delta is very low at the moment, so some of the small canals were impossible to navigate. We had to cut our trip short and instead rented some bikes to explore the river banks with their small villages spread out. As the river is being used for much of the heavy transportation, between the houses and villages on the banks only small pathways are used.

While those are impossible to navigate for cars, they are perfect for bikes, scooters and pedestrians. Some of the little 2 feet wide bridges without rails were quite adventurous to cross on bikes. One of the local stores served us fresh fruit an tea.

Some of us had never tried jackfruit. The less smelly sister of Durian. One is advised to eat it without smelling it. Esther has tried it seveal times but does not like the rubbery consistency, Chris does not mind. But we both are not fond of the smell. Jack fruits grow everywhere here to an impressive size of over a foot big.

After some exercise biking, we were put on a smaller boat to see how rice paper, and puff rice are being made. Rice paper is used in the Vietnamese style spring rolls and needs to be dipped in water before being soft enough to be eaten. It starts out as a hard, translucent disk . Turns out is is just rice flower and water that gets spread very thinly across a piece of cloth stretched across a steam basin, heated by the rice hulls left over from the rice mill. This is a cheap source of heat. The thin, crepe like rice paper get steam cooked in about 3 minutes and gets carefully taken off and laid out to dry for several hours before being cut into sellable shapes. In contrast, the rice puff is made in a big wok filled with hot black Mekong river sand.

The sand is used to transfer the heat more quickly than the wok alone. The rice is then filled into the wok and stirred around. We were all amazed how quickly the rice started to pop with this heat. thousands of little rice explosions happened in a matter of a few seconds. The whole mixture of sand, puff rice and rice shells is then put through a sieve where first the and drops out, being heaviest, then the rice shells an whats left in the sieve are only the white puffs. Pretty impressive to watch! we all had a taste before those get manufactured into rice crackers and rice candy.

What we gladly passed on was to try the snake wine though. Just seeing a small snake and a scorpio floating in a bottle of wine …. no thank you!

Back on the boat we had another delicious lunch, only to find out that our small cosy group of eight guests on board was to be history and we had 17 other passengers boarding early afternoon. Most of them belonged to a large Israeli family, but also some Italians and Americans. The boat feels crowded now.

We spent a leisurely time on the upper deck, while the new arrival were walking yet another village. At around six PM we had the most beautiful red sunset, setting a spectacular scenery, when the crew came up onto the top deck and started to fold down the railings and asked us to move to the lower two of the top decks. We were wondering what was happening.

Turns out we were going under a bridge that was just high enough for us to float under. The top deck was less than 20 cm from that bridge! it was quite spectacular to watch. Certainly a different Christmas eve than usual. Were it not for us all wearing silly reindeer antler ornaments , we would not have felt it’s Christmas eve.

Opposite to Chris, Esther found the food quite delicious, and after connecting with family through Signal videocalls, we had a good nights sleep as all mornings here start early. Breakfast at 7 AM…