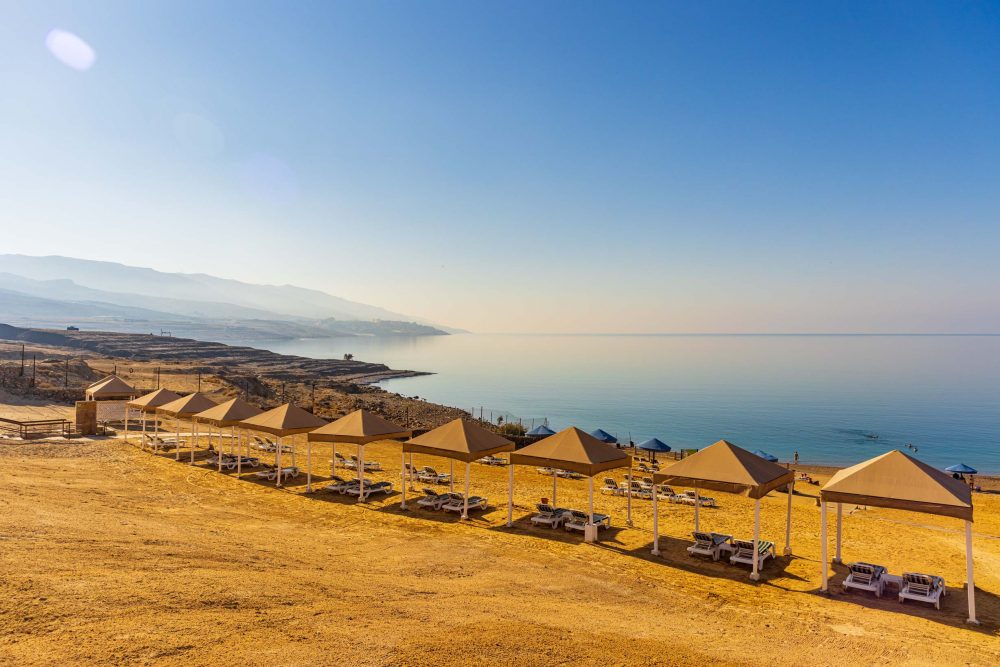 We decided on the fly to change travel plans and stay at the Dead Sea a day longer. To just baths in it for a few hours and then take off again did not seem to do it justice. We booked ourselves another night here and adjusted travel plans accordingly.

After a rather large breakfast of good quality but in a noisy hall reminding you of an cantine, we took our belongings and wandered down to the beach. The sun had come out by then and the wind from the previous day had lessened. It was very relaxing to just float in the Dead Sea, cover ourselves with dark mud and let ourselves dry.

It is surprisingly sticky and took a while floating in the sea again to get all the mud washed off. It is such a large body of water but something seems off: There is not a single boat in sight. No fisher nets drying on the beaches, no sail boat, no ferry. No smell of ocean. Other than a few people floating on the shore line, it is literally a Dead Sea since nothing survives in it (apart from some microalgae and cyanobacteria). The water is so reach with salt and minerals (remember: ten times more then in your common ocean) that it almost feels like oil on your skin.

We can see Israel quite clearly from our shore. It does not seem to be far away, but in reality there are worlds between.

We relaxed on the beach and did not even use the nice looking swimming pool further up – thinking of chlorine on our skin seemed like a sinn after having cleansed it in the Dead Sea water. The special composition of the Dead Sea is helping many people with Psoriasis or other skin irregularities. Chris loves the effect on his scalp: No dandruffs or scalp irritation for at least a week!

There is an intense water shortage in the region. The Jordan river used to compensate with it’s inflow the evaporation of the Dead Sea but nowadays it only trickles into the Dead Sea and so the last 20 years the water level has dropped by 15 meters.

This means for the resorts that original beaches had to be moved further and further down. In our resort we could see three terasses, where the beach had been moved further down with all it’s sand and amenities like showers, sun chairs and umbrellas.

There are many ideas how to fight the dropping levels, f.e. using water from the Red Sea to fill up the Dead Sea. But none of these projects have been realized so far, and all of them are controversial from a nature conservation perspective. No one really knows what damage it would do to the unique eco system.

There are only a few guests here as so many had canceled due to Omicron. We had the beach nearly to ourselves. To top our relaxing stay we booked ourselves into the hotel spa for a massage and facial. What a luxury!

By 9 PM and with all the sun and pampering we turned in for an early night. 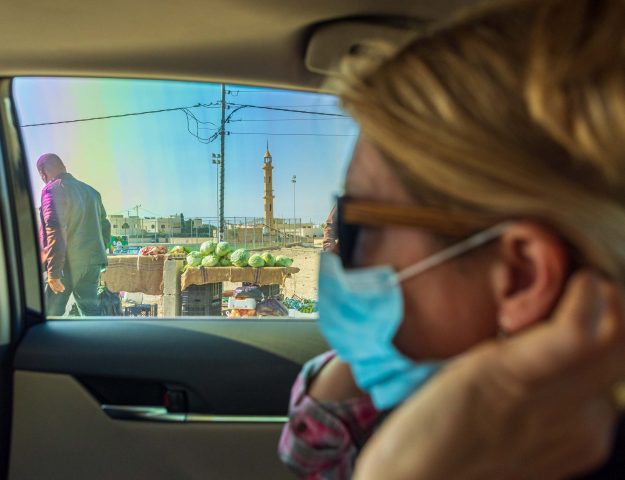