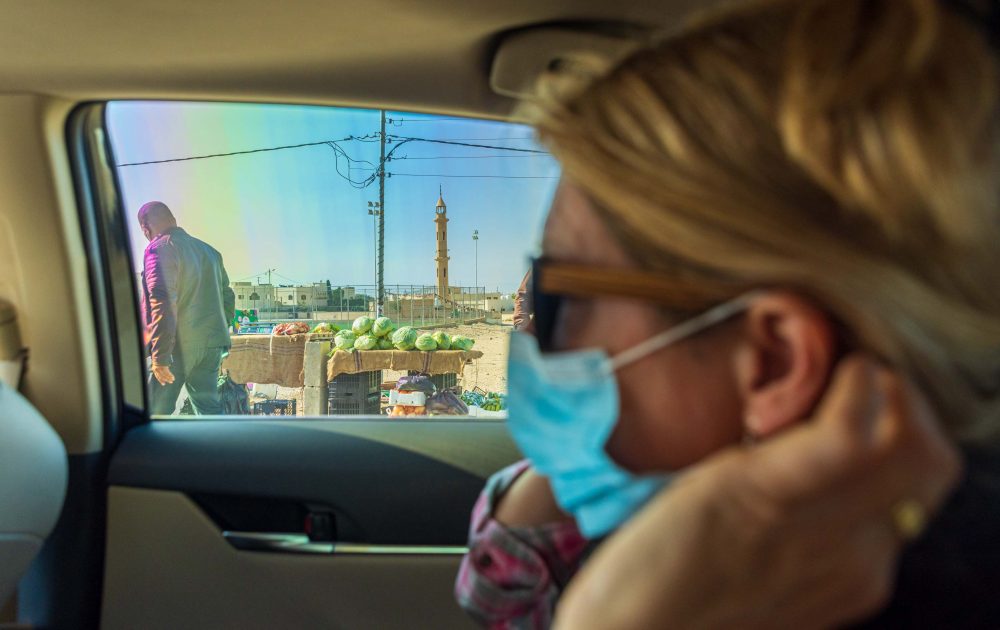 Today we first had a long drive from Aqaba to the Dead Sea. At the occasional police control stations, we had to put our masks on quickly until we passed. Otherwise it was an uneventful drive on a highway leading straight to a barren landscape with a lot of power poles.

The only memorable thing was that all of a sudden the sandy and dusty landscape started to get dotted with green fields the more North we drove. Rows and rows with little plastic tunnels started to appear that seemed to be mini green houses for small plants.

We had arrived at the tomato growing region in Jordan and everywhere now acres with tomato plants, some young , some ripe were appearing on both sides of the highway. Crates stacked high with tomatoes could be bought on the road side and trucks laden full with tomatoes could be seen lumbering slowly across little side roads. People worked in the fields and seemed to live in large tents next to them.

There is a distinctive difference between the have and have nots here in Jordan. Some things are inexpensive to us westerners, others have the same price in Jordan Dinars as at home. We literally paid 1,35 JD ( roughly 1,5 EUR) for 20 freshly fried falafel at a small falafel restaurant, and 30 min later 9 DJ ( roughly 11 EUR) for a pint of local beer. Some things are hard to understand.

Arrived finally at the Dead Sea, we checked into the luxury part of our journey, the Holiday Inn Dead Sea Resort & Spa. While the others in the group had day tickets that included lunch and the use of the facilities ( Pools, beach, mud bath etc.) we were booked to stay for the night.

Chris had been to and in the Dead Sea several times on the Israeli side, this was his first time on Jordan soil. There were quite a few waves and it was funny and challenging to keep bobbing on top without getting salty spray into ones eyes and nose which is not only really disgusting, but also a little bit dangerous. The Dead Sea contains over 30 % of Salt, Magnesium, Potassium, etc. (which is ten times more then our oceans). It is quite a unique experience to not go under but to float on top without effort.

Some of us generously used the olive colored mud to cover ourselves from head to toe with it. Supposedly it has minerals and other healing and soothing ingredients. Indeed the skin afterwards felt very soft and smooth. We nearly had the beach to ourselves. Besides a few day spa guests, we discovered that the hotel was very lightly booked and we could get our room several hours earlier than we thought.

After a late lunch at the resort and a nice coffee (for once it was not Nescafé with milk powder) it was time to say good bye to our French friends who had to fly of early morning the next day. It was a very nice group and we had a lot of fun together.