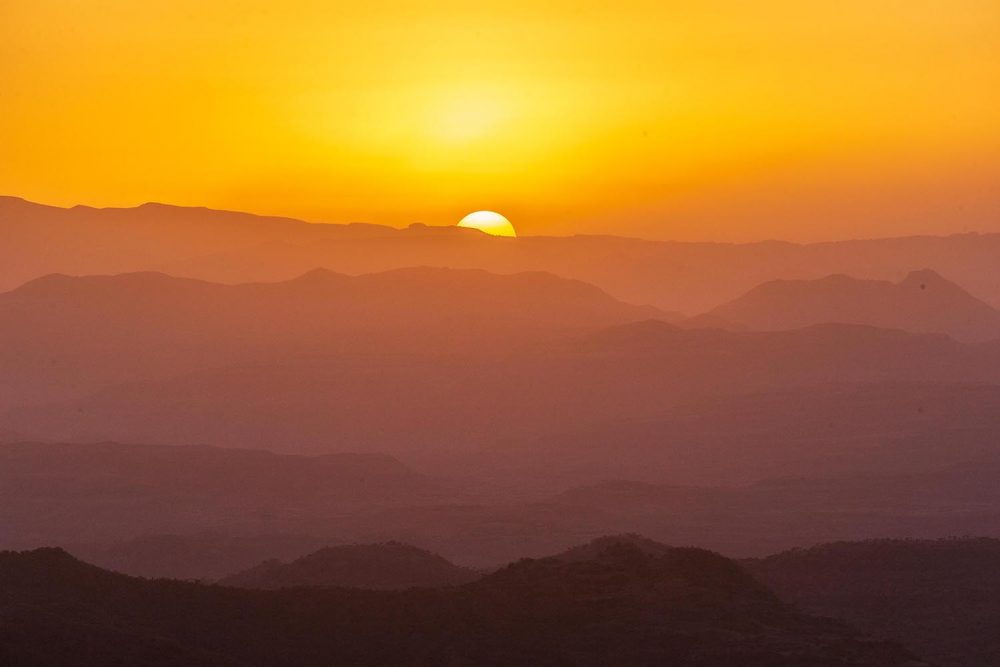 After a peaceful night and the best shower since having arrived in Ethiopia, we set out on a half day excursion trip to a remote monastery, known for its unique and stunning architecture.

The monastery of Yemrehanna Kristos is an hour drive away from Lalibela across bumpy roads. Only a few tourists make that trip as you have to have your own 4×4 car. The usual mini busses can‘t make that journey.

It is very different from the other holy buildings as it was built in the Axumite style of mixing wood and stone, rather than using pure stone/ rock to construct. One has to walk up to 2.700 meters above sea level, a walk of about 20 minutes and find oneself looking at a boring wall.

The monastery is built inside a large cave but protected on the outside by a three meter high wall with only one small entrance door. Again, shoes off on holy ground and in we went.

Right as soon as we entered the enclosure we were fascinated by the brown and white striped building. It‘s a real eye catcher.

It was built in the 11th century by one of the predecessors of King Lalibela. The Zegwe emperor, who supposedly imported the wood used from Egypt wanted to connect the Ethiopian and Coptic churches.

As stunning the building is on the outside, with its stripes and wood carved windows, the inside is remarkable as well.

The ceiling consists of ornately carved wooden shingles in various forms and paintings on the walls are quite well preserved. They never saw sunlight. The doors are original and beautiful in their massive construction with iron nails and old locks.

Towards the back of the cave, is the more macabre side to this place, as the skeletons/ mummified bodies of about 5.000 pilgrims are stacked up. It is not known whether they came here as far as from Egypt on their pilgrimage and died here or if an epidemic of some sort killed many of them and they were buried here. Not a pleasant sight, but impressive nevertheless.

Off we went again down for a nice buna (coffee) in the little village and even found a souvenir we liked.

Back at Lalibela we had a nice lunch and then set out to visit the second cluster of rock hewn churches, the Southern cluster.

Equally impressive than the Northern cluster.

Bet Gabriel Rafael is a very imposing monolithic church, where archaeologist are not sure if it was not the palace of King Lalibela with a chapel included. It can only be accessed by a small bridge as the only way into the building. It is surrounded by a big trench that fills up with water in the rainy season protecting it perfectly. As with many of the other rock hewn churches in Lalibela, the interior is much less impressive than the exterior. Fairly plain and simple with few ornaments or pictures.

We could see the restauration efforts as some of the churches had cracks and erosion over time. Through a small tunnel and a trench we reach a small building, that was supposedly the imitation of Jesus Christ‘s shelter in Bethlehem

Then through a pitch-black tunnel (no picture for evident reasons) of about 50 meters we slowly advance in complete darkness from the small shelter to a large, 12 meter high church called Bet Emmanuel.

This one reminded us of the Axumite style as well, like the monastery from this morning, as the exterior and interior mimics the Axumite style of mixing stone slabs with wooden beams. Just with this one it was all hewn out of rock. It is a beautiful church, very finely and precisely worked and supposedly the private church of the king and the royal family.

It really feels like this one has been crafted with special attention to all the details. The carvings of the window and columns are more exact and sharp, and the ornaments inside are cut with an exactness that is clearly above the others.

From there to Bet Mercurios, a half-collapsed church, that must have been impressive in its size as it contains 12 separate rooms. This one as well as the first Bet Gabriel Rafael are rumored to actually be the royal palace instead of churches. The layout and number of rooms of Bet Mercurios suggests as much.

Along the large trench and through several doorways and walkways we entered the last compound.  Bet Abba Libanos not a monolithic church but a cave church.

An existing cave was extended to accommodate a square building. It is connected by the roof to the rock but one can walk around it completely inside a cave.

This building shows some serious cracks as well, as the rock face above it started to sag and is slowly squashing the church in the cave.

After so many churches, albeit very impressive, we felt we needed to see something different for our last days and so we finished off the day with a (near) perfect evening dinner at the only 360 degree panoramic restaurant in town.

While the view and sunset of Ben Abeba restaurant could not be any more perfect that evening, the strong winds ripped napkins from our hands, blew pepper mills and salt shakers off the tables and our food got cold in record time.

But Chris had the best burger in Ethiopia and it was the last evening with our lovely and funny crew from Simien Eco Tours. 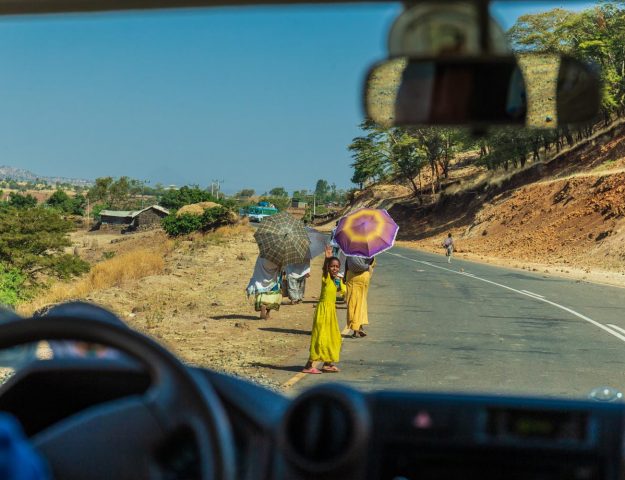