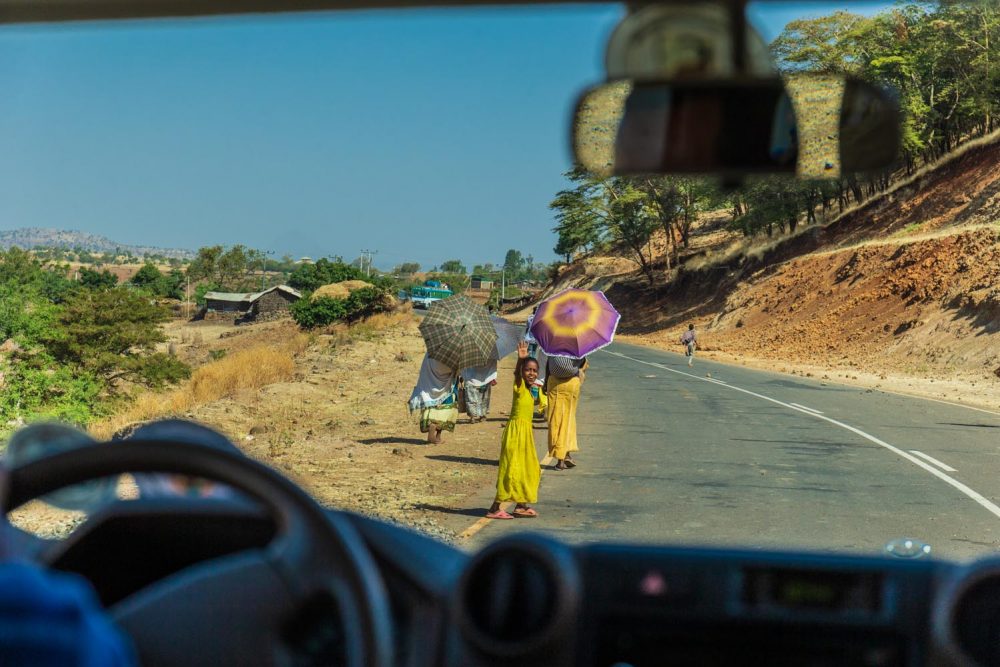 Today was a long driving day for us. From Mekelle to Lalibela 300 kilometers drive that take a full nine hours!

You can imagine that the road conditions are very challenging at times. Most of the way is asphalt road, but that does not mean you can drive fast.

Our Toyota Land Cruiser and driver are perfectly equipped for those journeys but we obviously are not. Remember the ‘African massage’ from the other post? This was a mega massage that lasted for hours… About half of the nine hours spent in the car were on dirt roads in questionable conditions.

Even straight, asphalted roads here are not to be driven on fast at all. There is a number of sudden obstacles that can spring at you from any direction. Just to name a few:

Any kind of animal can suddenly walk into the road, from chickens and monkeys on the smaller side to camels on the larger. Sheep, goats, cattle, donkeys you name it, they will appear suddenly, prompting sharp breaks or avoidance maneuvers from our driver.

Then there are the hardly visible potholes. Mean half concealed holes in the surface that will break any suspension or blow a tire without warning. Blown tires are lined up at any village and city galore.

Then there would be the occasional traffic that we needed to overtake, or that was coming towards us. Mule carts that try to navigate steep downhill slopes using the entire width of the road in order not to slip down with their cargo or heavily overloaded trucks, leaning precariously to one side, crawling up or down the mountain roads like huffing and puffing snails. Often enough you see overturned trucks or lost cargo on the side of the road.

Then there are asphalt roads, that turn into gravel roads with no prior warning and then at some point back to asphalt roads. Great tire blowers are also the many improvised sleeping policemen (road bumps) some are just mounds of gravel on the road intended to slow the traffic down (usually in a village), some concrete humps, some are irrigation ditches. All have the same effect on cars: they have to crawl over those very carefully and at a snails pace.

And last but not least near invisible steel ropes straight across the road in about 1.50m height that are signaling a checkpoint where each car needed to slow down and get either inspected or waved through by a nearby guard or militia man. Often, we asked ourselves how our driver knew, as those steel ropes are hard to see. He just knew. We would have driven straight into more than one…

So, this explains why a 300 km drive can need nine hours.

Finally, we arrived at Lalibela, the most famous destination in all of Ethiopia. The Jerusalem for the Ethiopians and religious center. Former capital of the empire and the must-see tourist attraction of every Ethiopia traveler. More on this in the next blog entry.

As this day was mostly spent in the car, without many great picture opportunities, we decided to enrich this blog entry with some other fun facts and observations from our travels here.

Power: the relationship that Ethiopians have with electric power is rather sketchy. Frequent power outages lasting hours to days are not uncommon. Most important institutions and hotels have a generator. Wiring seems to be very haphazard too. Solar power is unfortunately hardly seen at all. Our little solar charger panel was in high demand in the mountains to charge everyone’s mobile phones. We would guess that half of Ethiopia`s houses are not connected to electricity.

Building boom: wherever we went, we saw new buildings spring up. Whether it is government supported housing for the people (looking like copy paste villages with their tin roofs and identical rectangular layout) to concrete office and factory buildings. This building boom is visible everywhere but the deep mountains. Scaffolding mostly looks like a wooden spider web attached to some other structure and large building machines are rarely seen. A lot is still manual, human labour.

Water in Ethiopia: as you may have guessed from some blog entries, warm or running water is good luck here in Ethiopia. While we were not at the top of the range hotels, the common theme was that while hot water is there with a boiler in each room, to find it in good working condition is not. Dribbling, luke warm showers are the norm and while not showering or washing hair properly is no big deal for a few days, after a while one craves a good shower and hair wash. Ethiopians in the countryside don‘t have running water for the most part. They fill up orange 10 liter canisters or water barrels at a pump that‘s more or less nearby and transport it with animals most of the time. We have seen some irrigation systems with the help of ditches, diverting water from higher up to the fields, but that‘s not the norm. Toilets are also mostly without flush. One has to pour water from a can into it and discard paper separately. We won‘t have a separate blog entry on the sanitary conditions as they vary greatly depending on location. Let it just be said that the bush toilet is a more preferred option than most here.

One thing we noticed straight away is that every man here is carrying a walking stick. We were wondering why and our guide told us that for a man a walking stick is like an extension of himself and always has to be carried. We compared it to a handbag for a woman in our world – without it, one feels naked. A stick is used to prod slow animals, chastise unruly kids, waved when dancing and leaned upon when one is tired – simply indispensable.

Recycling: it is big in Ethiopia, but not as one might think for environmental reasons, no – simply out of practicality and lack of resources. Just to name a few examples: we found plenty of old wheelchairs now functioning as rolling bases for small street shops and discarded water canisters were cut to make blinkers for the donkey and mule carts or fans for heating up the fire to make coffee. Broken pots were used to secure the tips of thatched roofs and plastic bottles are cut and painted green to simulate artificial plants.

Fashion: we noticed that while most men‘s fashions are western dress (with exception of the very old) , most women‘s fashion are local fabrics and gowns. Something that’s surprising but pleasant to look at with many bright colors. Shoes are mostly plastic sandals (for men) or plastic slippers (for women).

They are produced in Ethiopia. Gashow says, shoes from China have a poor quality here.