A sunny start into the New Year – Day 11 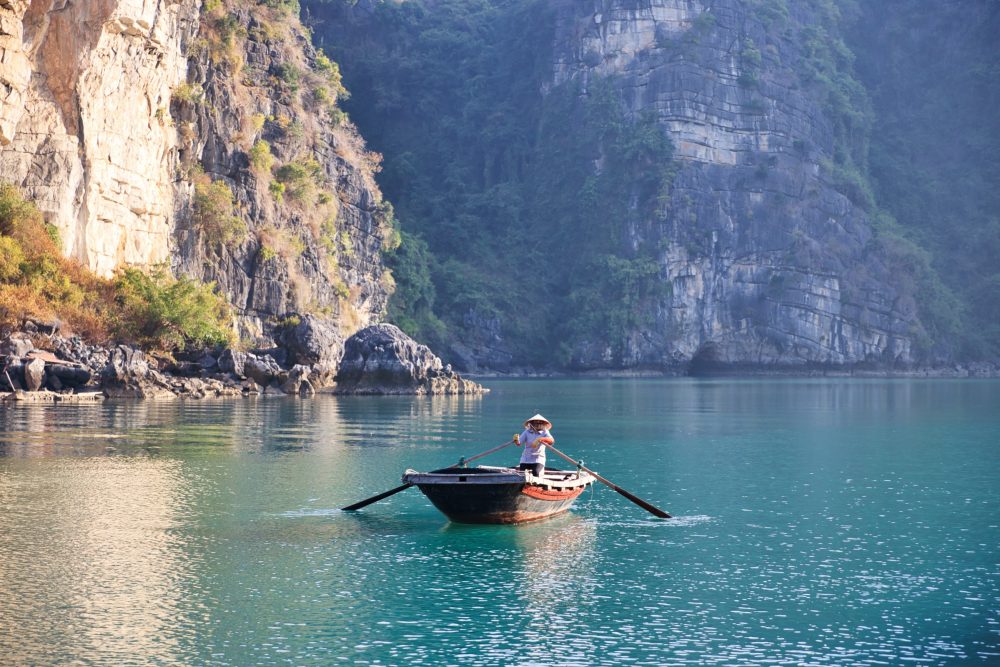 Rower from a nearby fishing village

It’s the first day of the new year – and we were getting up at six AM. Not something we usually would do, but the sunrise and scenic beauty of the early morning in Tự Long Bay is just so unique and not to be missed.

We were lucky again and the sky only had a few clouds as the sun was rising slowly behind the karst rock formations. Our ship was swinging calmly in the sea and Chris decided to let his drone fly to catch this magic morning. Us others we were getting ready for our 6.30 AM Tai Chi introductory class.

None of us had done Tai Chi before and so what started easily, following simple movements morphed into the more complex series of connected, flowing poses which challenged all of us. It did feel quite similar to yoga in slow motion.
We had a good laugh trying to follow our Tai Chi master without toppling over. By now we had started the boat up again and moving again towards a small floating fishing village which we were supposed to visit. A village entirely built on water.

While the boat was moving Chris flew the drone again and sweated quite a bit until it was safely home again. Drones apparently don’t like landing on moving objects like boats and so he had to artificially crash land it on deck. At least for this segment of the journey we were really lucky with the weather.

Once anchored for the last excursion of this trip, we boarded our by boat and drove to a swimming dock where we changed into smaller rowing boats, four people to a boat.

Some of the rowing ladies looked like they came straight out of a photo shoot, one even complete with trench coat and hat.

She paddled us around the swimming village, consisting of small houses with small fish farms attached.

Each house had several dogs guarding it and often a colorful fisher boat tied in front. It was a picturesque view.

A challenge though for the families is the school situation. There is no school close by for the children and so either the families with children move to the main land or they board their children with other family members on the main land. They are mostly fishing for squid here and shrimp as the water is too shallow for big fish.

It is also extremely salty, washed from the many limestone formations into the ocean. This makes it perfect for growing oysters. The fishing village also had one pearl farm in their midst as well. Each boat was equipped with a landing net and the fishermen and rowers were catching floating plastic and trash from the sea if they saw any.

The bay and whole area looked very clean. We did not see much trash floating about at all.

Back at the Treasure Junk, we enjoyed a sumptuous brunch before packing our bags and heading back to the harbor.

We all would have loved to stay another day out here. Alas we have to say good bye to our very nice travel family and catch a shuttle back to Hanoi.

Arriving mid afternoon in Hanoi we had the rest of the day to stroll through the old town. Turns out the day of the Hanoi half marathon was today, several roads are still closed to traffic and so it was very pleasant to walk around Hoàn Kiếm lake on foot.

Plenty of families were out and about and enjoying themselves.

In the middle of the lake is a small old pagoda that has seen better days and a small island with a newer pagoda can be reached by a picturesque red foot bridge. Many locals went there to donate for good fortune.

Lunar new year is fast approaching and so everyone tried to get ready for it. This includes making donations, shopping for food and household things to cook for the entire family and of course gift shopping! The Old Quarter is teeming with people, little shops and restaurants are making good business.

We decided to try some street food, pork squewers, little snails, self made BBQ on a little table oven, sweetened water chestnuts just some of many things we hadn’t eaten before.

Glad to be walking after a filling dinner, we set out to explore the famous Hanoi Night Market. It’s only on weekends from seven PM to eleven PM and it’s an entire long road dedicated to little stalls of all kinds. And all kinds of fake goods too. Handbags, eyewear, clothing items of all kinds. Toys, cards, some true handicraft items but most of it was made of plastic.

In between we saw many small food vendors selling sweets and treats for the crowds. We slowly wandered through the sea of people just watching and taking it all in. Europe is so far away…

We decided to call it an early night as we have plans for the morning still before our airport shuttle picks us up at lunchtime. We really like Hanoi, but agreed that we could never life there for a longer period of time. Too much air pollution, too much traffic, too many people…