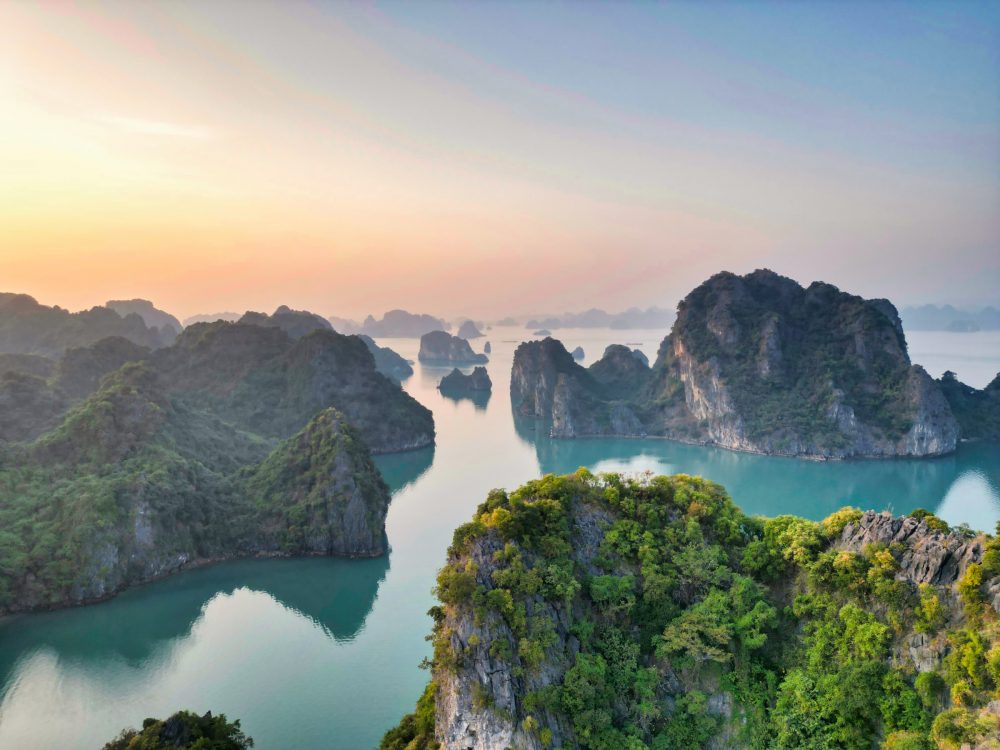 Today we need to say good bye to Tâm and Dong. One last fantastic breakfast in our lovely hotel and off we went early as we had a four hour drive ahead of us to Hạ Long Bay harbor. It started great with us stopping at a small coffee shop that had egg coffee for Chris (which he had come to love) and a real cappuccino for Esther (which she really misses). Egg coffee or Cà phê trứng is made, by the way, by beating an egg yolk with sweetened condensed milk for about ten minutes until it makes an airy, creamy, meringue-like fluff. This eggy goodness is then slowly poured on top of hot (robusta) espresso.

Driving for about two hours we stopped at a rest station that was famous for a vast array of traditional sweets. The Vietnamese turn pretty much anything into a snack or sweet treat. Beans, shrimp, fruit, nuts, beef, pork, soy beans etc. pretty amazing.

We loved one of the nutty treats best and one made of thin coconut shavings rolled in fine sugar. Very yummy. And of course the dried and candied mango. Chris did not want any sweets or salty snacks, he just wanted to take the little kitten with him that he found attached on a leash in the corner of the store. At least we gave it some water.

Continuing on our way we had one more stop before Hạ Long Bay harbor. We stopped at a pearl production site. Together with what felt like a thousand tourists, mainly domestic or from other Asian countries, we watched the painstaking process of pearl seeding, growing and harvesting.

The venue had a number of guides but they all seemed to be busy so Tâm quickly organized for us a French speaking tour guide and simply added us to a group of French to follow. We learned that there are three main types of oysters that produce different pearly. the most common one is the Akoya oyster, producing while translucent pearls. Then the Tahitian Oysters that produce a steely silverish and purplish pearl, often larger than the Akoya. And last but not least the beautiful South Sea Oyster and pearls that are the largest and have a beautiful creamy and yellow color. We watched how the oysters were carefully seeded with a small round ball made of another mussel shell. The oyster is carefully opened a little bit and the round seed ball is implanted carefully into the oyster. Naturally pearls develop around grains of sand that accidently find there way into the oyster.

After having put back in cages into the ocean, the oyster takes between two and four years to encase the little ball with thousands of layers of nacre (mother of pearl/ Perlmutt) before it’s being harvested. Man has no control over this process other than seeding the oyster and putting it back into the ocean. The size, shape or color of the pearl cannot be influenced or seen from outside. About 30% of the oysters die during that period and that can’t be influenced either. When the oysters are opened after their number of years is up it’s always a surprise what pearl awaits. While natural pearls are often asymmetrically shaped depending on the sand corn or dirt that caused the nacre, the cultivated pearls are very often symmetrically round due to the seedling inside, but not all. The best pearls are being used to make jewelry, the others ground and used in cosmetics powders to make our skin glitter.

While the process was fascinating to watch we wanted to escape the many tourists that clogged the pearl shop. So we went on our last drive and arrived at Halong Bay harbor right before 12 noon. We said good bye to Tâm and Dong as they will have three days off now and then ferry other tourists around next week. They have been a very nice, humourful and attentive guide and driver and we told the agency that as well.

Soon after at the very busy ferry and boat terminal we met our fellow travelers who we will be spending new years eve with on board the ‘Treasure Junk’ (yes we know, not a great name in English, as junk means trash). Luckily the boat was far from trashy. It was a very elegant but a bit aged wooden vessel with sails and motor. We were lucky again as the boat was laid out for 30 people and we were only six adults and two children on board. That’s all.

We met a very nice couple from Canada with Polish heritage, now working in Switzerland. And an English couple with two adorable little girls that moved a year ago to Thailand working for the British embassy there. Having plenty of space on the boat we were lucky that the two couples got the prime cabins on the upper deck. What a luxury!

A cabin with at least 20 square meters and a bathroom double the size of ours at home complete with shower and bath tub. Each cabin had an own sun deck as well. The British couple were happy too as they got an extra room for their girls despite not having booked one. What a nice and accommodating crew!

We all got our luggage and had some relax time on the top deck followed by a nice lunch while driving out to Hạ Long Bay.
Where to start to describe this wondrous area? Turquoise blue seas are sprinkled with thousands of little islands.

Those islands are rocky karst formations very raggedy covered partially with greenery and sometimes a small sandy beach. Those island can range form a few meters diameter like a rock in the water to hundreds of meters across. It looks otherworldly and nothing we have seen before. Birds can be heard in large volumes and supposedly monkeys live on some of the rocks as well.

Luckily the sun managed to burn away the haze and so we had a whole afternoon of sunshine and blue skies. It was really an amazing sight as we cruised through those rock formations from Hạ Long Bay to Tự Long Bay. While many only come for a day trip, those ships stay in Hạ Long Bay as it’s easier to reach. s we are spending the night on the boat we cruise further to Tu Long bay, and this one has the same charm as the other but is much less traveled and quieter. Fewer boats, fewer tourists and that’s how we like it.

After about a two hour boar ride we anchored in a small secluded bay, took the smaller side boat and were driven to a floating fishing village that stored canoes to paddle for us.

Two to a boat we headed out with our guide and four boats to spend a leisurely afternoon paddling around the karst rock islands. Very relaxing. The water was clean and not too cold and the sun was shining. No better way to start new years eve.

After an hour and a half of leisurely paddling around, Chris could not wait to finally fly his drone from the top deck into the setting sun, sipping a coke and admiring the world from above through his drone’s eyes. A pretty impressive sight! and finally the weather he had hoped we’d have on this trip.

Before dinner we learned how to make Vietnamese spring rolls (not easy with sticky rice paper) and had another hour to relax before new years eve dinner.

Unfortunately Chris was out with a migraine for the rest of the evening and so we were only grown ups to celebrate New years eve. The crew outdid themselves with amazing food decorations, even carving a watermelon with new years good luck wishes.

May 2023 bring many good things to this world.