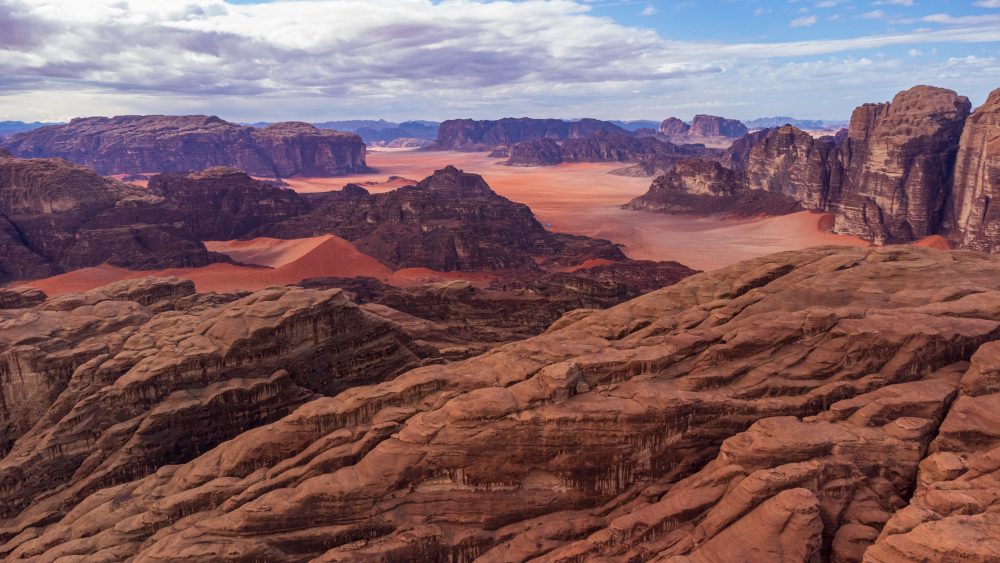 This was to be our last full day in Wadi Rum and our longest ride yet.

We set out to brilliant sunshine, the rain was long forgotten, the cascades had dried up and the little streams that had formed were running dry again. Only the sand was still wet.

And talking of sand: we had not known that there were so many different shades of sand in the same desert. From a vivid orange to more subtle tones of beige, grey and even greenish tones. It was pretty amazing to see that color variety in such a barren land. Besides a few birds and domestic animals, we did not see a single antelope, fox or other mammals.

But we saw plenty of 4WD tourism that drove up and down steep dunes of sand. The 4WD seems to overtake the traditional means of transport like horses and camels and we fear that a few years from now, it won’t be possible to have a quiet ride in the desert with all the traffic that is criss crossing the Wadi Rum at high speed. We could not really picture what it would look like if all those bedouin camps were to be full of tourists, all doing outdoor activities and unfortunately many leaving their trash behind. And what’s even sadder is that the locals themselves did not seem to care much to keep their environment clean.

Broken auto parts, thousands of discarded plastic and glass bottles, Chips wrappers , plastic bags and other plastic packaging could be seen everywhere even on our trip. Imagine what it will look like if they do not start cleaning up or stop littering.

Despite all the negative things that civilization has brought , the landscape is still breathtakingly beautiful and we all agreed that the last two days were the best of our trip. Back in the camp nearly at complete dark, two surprises were waiting for us there.

The not so good surprise was that apparently despite a full day of sun, the water tank for hot water had not been filled , so only cold showers were possible. The good one was waiting for us at the camp.

As it was our last evening in the camp, our cook outdid himself and cooked another traditional bedouin dish, this time with Chicken and vegetables called Zarb. A large round hole about half a meter deep gets dug into the sand and a fire lit until there are only hot coals left. Then a large round cylinder with several shelves in it gets stacked with different ingredients. The bottom layer, closest to the hot coals houses the meat. In our case Chicken. The layer above houses potatoes and on the top shelf other vegetables like onions, carrots, zucchini and aubergines are packed before the whole cylinder is closed, is put into the hole and covered entirely with sand. That way it has to cook for several hours. Once they unearthed the cylinder a delicious smell emanated from it and we all agreed that this is a superb last dinner of a memorable trip.

Since it was the last day, the singer from the desert showed up again with a pretty impressive boombox, probably with enough juice to charge some hundred phones in the desert. He also used a stage mike and his iPhone to choose the background orchestra.

Marie, a french girl straight out of Paris tried some karaoke.

And Chris got the cloth of Suleman, the camp owner and tried his own interpretetion of a beduin dance. Indeed, a very funny evening.

What you don’t see in the pictures: at the end of the night you smell like smoked meat, since all the cigarettes, the nargile and the smoke from the fireplace fills the tent.