DAY8: Encounter with our Cousins 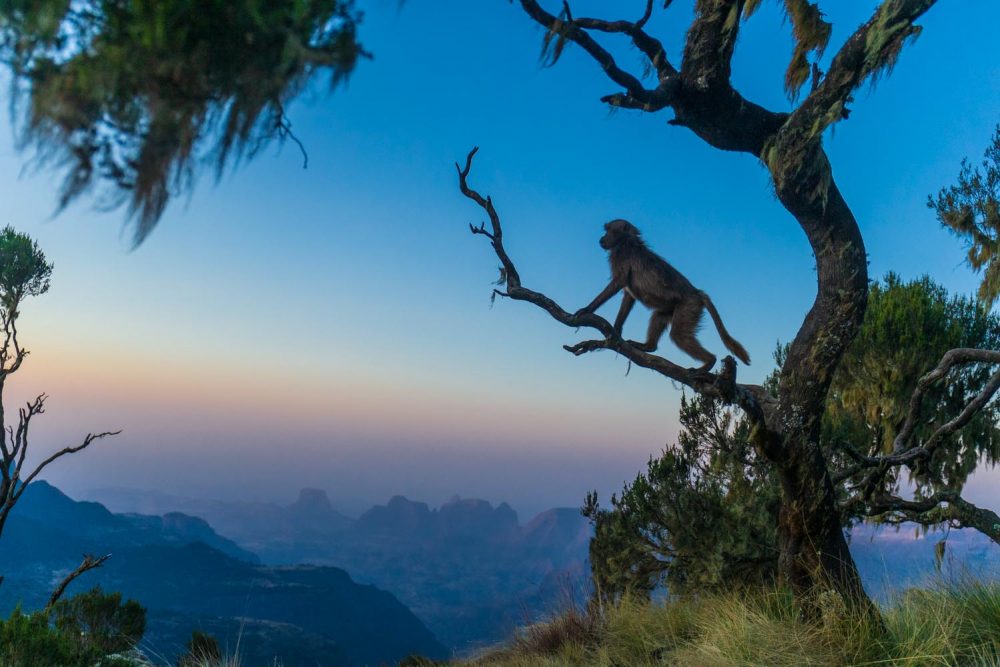 Today we only had a half day trekking left before having to head back out of the National Park by four wheel drive.

For us it was really the baboon camp, that made camp Chennek so memorable. The day before at dusk our guide had led us already at a small high plateau where we saw a small herd of native Gelada monkeys grazing and digging up roots.

Gelada monkeys are native to Ethiopia only and are special as they are 100% herbivores. Most other baboon types eat meat as well and are much more aggressive. Esther can tell first hand from her experiences with baboons in Malaysia and elsewhere in Africa. They have huge fangs and are up to one meter tall sitting up. A force to be reconed with and be aware of.

As much as a bad rep baboons normally have, Gelada baboons are completely different. As herbivores they are not aggressive at all and as they are not being hunted are not shy to humans.

So that evening and the next morning we had the pleasure to wander amidst whole families of Gelada baboons and just sit down and study them.

It“s like a live theater and one is sitting in the middle of the play. The stage is all around. The papa baboons are the kings and get groomed by their hareem monkey ladies.

Some teenager monkeys try to overstep their boundaries and get put back into their place by the more senior ones.

The babies play catch in the rock face under the watchful eyes of some adult baboons. It looks like a rock climbing monkey kindergarden.

And the very little ones still cling to their mama`s and ride on their backs.

The monkeys talk to one another, whether it is to tell some monkey off, to communcate : groom me! Or to just say Hi I am here, I am OK. There was such a variety of sounds, we were both amazed. We could have sat there the entire morning just watching the show those baboons gave us.

It was as if we as the audience did not exist for them. They just carried on foraging, playing and grooming. Just as Chris got carried away taking hundreds of pictures of these cute creatures.

Besides the hours spent watching the monkeys we also saw a very large Lammergeier with a wingspan of about 1,5 meters and a crested eagle, who’s name escaped us.

One of the French guys was a bird expert and he told us that it was very rare and he was delighted at the number of birds of prey he saw here in the Simien Mountains.

After a delicious lunch, it was time to say good bye to the national park and our crew, consisting now of our excellent cook, assistant cook and the scout.

We offered them a tip as well as multi tools we had brought from Germany. The flip open multi tools were vey much appreciated and treasured by all. They kept looking and marvelling at them on the drive back to Debark. It was a long and very bumpy dirt road until we arrived grimey in Debark at our hotel. We both craved a hot shower and hair wash after four days of wilderness and very little personal grooming going on.

Showers are another topic besides toilets and internet connections that Ehtiopia really needs to work on. All rooms have hot water boilers, but someone forgot to put a valve in to make sure that the vaccum from the hot water leaving the tank gets equalized. As is is,, showers are dripping only and then the hot water suddenly stops after five minutes completely. No water and one is standing under the shower soapy wet and nothing comes out of the tap. Despite the hotel clerks assurances that the shower in our Debark Hotel works without issues, we again were proven wrong and Chris had to get the plumber (or whoever was handy with a wrench) while Esther was soapy from head to toe, waiting dripping wet and wrapped in towels until the shower was ìmproved to the point that the dribbling tap did not give up producing luke warm water after five minutes. Needless to say that a shower with hair wash and conditioner takes at least 15 minutes of dribbling water until all the soap is washed out, and that’s a pure guess.

Chris cared much more about the electricity to recharge all his batteries. Once everything was plugged in the power went down. First he felt a bit guilty, but then we realised that the power outage concerned the whole city.

Africa, we love you!