DAY 7: The marvels of the Simien Mountains 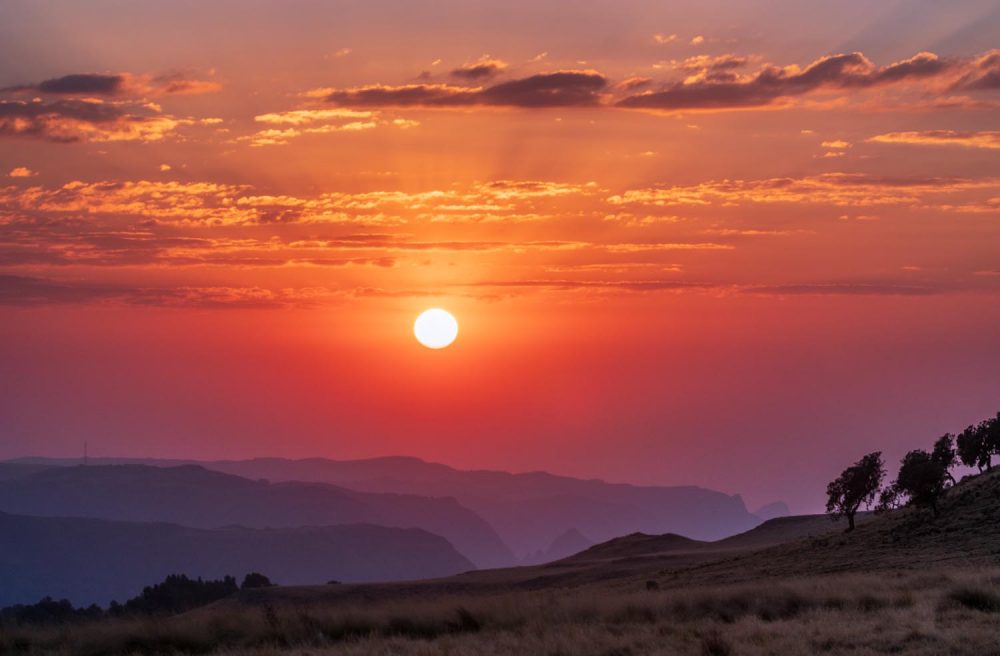 After a very cold night on the plateau of Camp Gich, we woke up to some strange sounds.

It was still dawn but already the animals were busy hunting.

Close to the camp side we saw foxes, jackals and  the very rare Abessyinian wolf, that unfortunately is dying out. In this national park only about 50-60 animals remain. They get decimated by rabies and other illnesses introduced by local dogs.

After a warm, hearty breakfast we mounted our small horses again and set out for the longest trekking day.

Our first stop was the peak of Shayno Sefer some 3.962 meters above sea level. Wandering on the high plateau with a grandiose view of the surrounding, ragged mountainside, we saw a herd of Gelada monkeys, also called Gelada baboons, the only endemic moneky species in Ethopia. The largest population lives in the Simien Mountains. More about those in another blog day.

While we left our horses to climb to the peak of Mount Shayno Sefer, we were at awe again by the steep cliffs that drop hundreds of feet into the valleys. There are hardly any gentle slopes. Either you stay on the high plateau, or you are down below in the bottom of the valleys. Very rarely are slopes that are gentle enough for humans and domestic animals to change from highland to lowland.

After a nice break we continued on the highlands to our lunch destination and the highest point of our journey: Mount Inatye, some 4.070 meters above sea level.

Sheer drops on one side but a fantastic, breathtaking view from up top.

Cheeky thick billed ravens came and of course were trying to get at some of our food. After the experience with the stolen soap, we were careful not to leave any valuables unattended.

Then we started our  big descent down to 3.620 meters, where our next camp was waiting. It was a steep up- and downhill path full with large rocks and dusty soil. Impossible to ride the horses on those slopes, so we all hiked by foot.

A few local children tried to sell some souvenirs they had made themselves and we found one that we thought Esthers parents liked. No point in haggling here, as those children were waiting for maybe 3-4 groups coming by a day, not more. Despite peak season here in Ethiopia and the Simiens, there were still no more than four groups we saw in each camp at one point in time. Ethiopia really has not been discovered by tourism (yet), let alone mass tourism.

In the middle of the afternoon, we arrived at Camp Chennek. Our two mules and their handlers as well as the cook and assistant cook had already set up our tent, unloaded our luggage, out linens on our matresses and made tea and coffee with biscuits or popcorn. They had organized a live chicken for our dinner, the other group had a live young sheep tethered to the cooking hut as well. Food can`t be any fresher.

This is really the African contrast at its finest. Getting served hot tea and coffee as well as an excellent freshly cooked three course meal with a chef in white cook’s garb including a bottle of wine and then having no running water or electricity, bathrooms and toilets where most people rather use the bush toilet than any of the buildings that don’t even deserve the name toilet.

Rather than complaining about the things you cannot change anyway, everyone just went with the flow and had a good time.

The landscape and views from the high plateaus and peaks today were simply breathtaking we enjoyed the multitude of languages in the cooking hut at dinner where everyone gathered as it was so cold outside.

A lively fire was lit in the middle and all te staff as well as the trekkers sat around the fire and babbled away in at least eight different languages. We counted German, French, Israeli, Amharic, Czech, English, Danish and Russian but there may have been more just the single people conversed in English with all others.