DAY10: Getting closer to the heavens 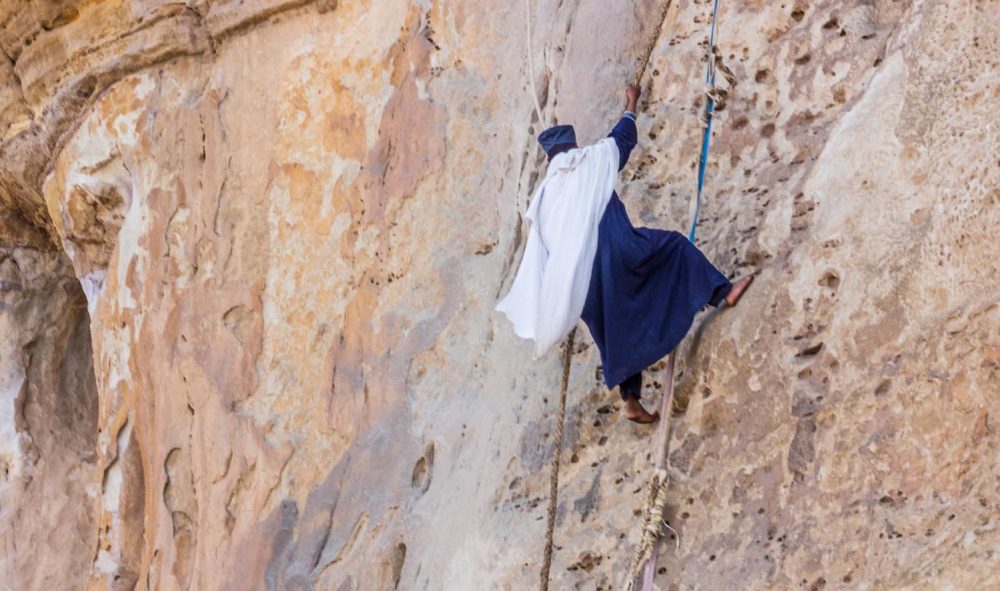 Today we got up fairly early as we needed to visit the telecom office again to make our new SIM card work. Saying good bye to Axum was not difficult, as we did not see it as a very charming city. It was once the capital of the Axumite empire, but as so many buildings and churches had been destroyed or the building material used for other things, there is not much left of the olden times other than history and stories.

We drive from Axum towards Adwa and the impressive Adwa mountain range. Great trekking there but we had not planned on stopping. We bought some fresh chick peas on branches as a snack and approached out first sight-seeing target. The small town of Yeha, boasts not only a small university, it is also the host of the most important pre-Axumite Empire archeological site. Yeha was founded more than 2.800 years ago and was the regions capital before Axum took over.

Yeha is famous for its huge 12 meter high Almaqah Temple. Dated some 2.700 years ago. Only the walls stand today, the 12 impressive columns have been taken out and used elsewhere since. Only the large base stones are still visible on the temple floor. The huge sandstone blocks were hewn to perfection and fitted onto each other without mortar and it`s impossible to get a single sheet of paper in between. Quite a big feat of building mastery at that time.

Next to the old temple is now a monastery that sports interesting engravings of ibexes, supposedly the preferred animal for sacrifices. It was not possible to see the inside of it.

What we could visit was another excavation in its vicinity, the old palace ruins of one of the kings there, which at the time consisted of a lot of heavy sandstone interlinked with strong wooden beams and some bricks. Currently the site is being excavated by a team from Hamburg from the German Archeological Institute.

We went further on our way to see the oldest monastery of the Tigray region, Debre Damos.

Debre Damo is one of Ethiopia’s most important monasteries and is thought to date back to Axumite times and the 6th-century reign of King Gebre Meske. But what makes this monastery really stand out is its location: Almost inaccessible on the top of a high plateau, a so called ‘Amba’. And in fact, there’s only one way up:

To reach the monastery, you’ll need to scale a sheer 15-meter cliff. There’s a thick leather rope to help you climb and the monks will tie a second line that looks a bit like a fire hose around your torso and help pull you up.

This special experience takes some nerves and you have to be able to deal with heights. That and the fact that only men are allowed on the premises made Esther decide to stay with our driver at the car and munch the fresh chickpeas.

After using the rope to pull themselves up Chris and Gashow crawled through a little door to enter the women free world of the 150 monks and their 150 disciples. With them the indispensable local guide. In his unique version of English, he led us through the compound.

The first question: How did the first person reach this island in the sky? Well, good question! The answer is even better: a men named Abuna Aregawi had God on his side, and God, knowing this was a fine place for a saint to find peace, made a giant snake lower its tail down the mountain, allowing Aregawi to reach the summit.

The Abuna Aregawi church of Debre Damo is probably the oldest standing church in the country (10th or 11th century) and maybe even all of Africa.

Thanks to renovations some 50 years ago it is in an excellent condition and likely the most elegant church so far. Chris tried to take as many pictures as possible to document it for Esther.

The monastery’s location once allowed Axumite monarchs to keep excess male members of the royal family locked up here. Just in case they might have threatened the rule of the active king.

The monks here have to be completely self-sufficient. Water is collected during the rainy season in carved out cisterns, they grow their own food and have their own livestock up here.

Fun fact: the animals up here have to be males (except for chickens and cats).  Young oxen and male sheep are lifted up there by rope and are fed on top until they are ready for slaughter.

There is a second church a bit further down, but for Chris it was impossible to decipher the local guides explanations any further. But a weird smell evaporating from one of the caves made him curious: Indeed, there were several coffins pilled up. Obviously, there were real bodies inside and they are left for 80 days and then buried in one of the caves. Fun fact two: That’s the only way you can get on the premises if you are a woman – in a coffin.

Now came the time to get back to the car and back to Esther. Unfortunately, there’s only one way back down, and that’s the way you came up. But looking down is worse then looking up… Chris was joking his nervousness away by telling the monk he would get 10 Birr now and the other 90 once he’ll reach safe ground again. But eventually he managed to make the 15 meters without an accident – since everyone is protected by the saints as the locals kept on repeating.

Right after Chris & Gashows descent, a monk showed them how to climb in the most elegant way – looking like spiderman in action, ready to save the world.

After the visit to the monastery Debre Damos, we continued with a late lunch at Adigrat in a remarkable restaurant called Geza Gerelase Cultural Restaurant, which clearly is a prime spot for carnivores. It even has a butchery inside the restaurant for all to see. Really weird, but the food was good.

We tried ox on a little charcoal stove but it was really a tough ox at the end of its life judging by the chewiness of the meat. As always accompanied by a very yummy tomato salad, which gets served here everywhere in variations.

We decided to drive onto our next hotel in Hawzen and arrived there by 6 PM. As we had eaten only at 3.30 PM that day, we decided to skip dinner and just had a glass of Ethiopian wine.