DAY11: Yet another leap of faith… 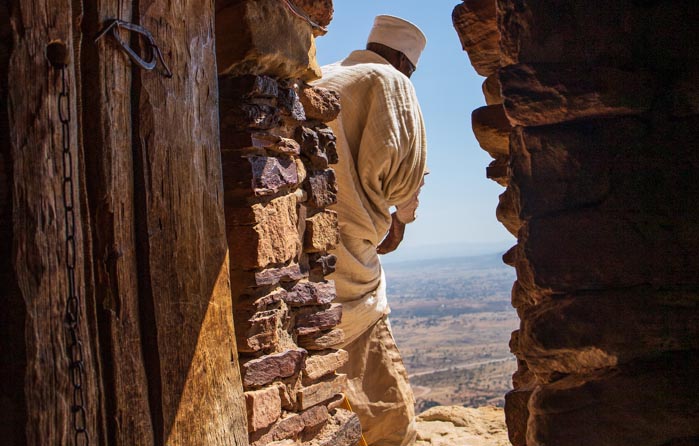 Close to the heavens

Today we spent the day rock climbing and church viewing. And yes, those two are related as the rock hewn churches of Gheralta are only accessible by steep and cumbersome climbs. Some are downright scary and not for the folks with vertigo… like Esther.

We set out to our first destination and picked up our local guide and a climbing harness at Megab, a small village before the mountains. Our first destination was a sheer rock with a flat top that looked very difficult to climb without crampons, ropes and a harness. Over a very rough road, only accessible by 4×4, we started our trek. Right on our path were two Abyssinian Ground Hornbills, large ugly black birds, that obviously always travel in pairs.

Our hike took us up a narrow chasm between two rock faces. While the climb itself was not challenging so far, the altitude was. Being on 2.500 meters above sea level made us heave like we were the most untrained of hikers, which we, good old Bavarian mountain goats, certainly were not. The shortness of breath was really puzzling, but all `Ferendshi` (white foreigners), young or old, were grappling with the same issue.

The chasm ended on a saddle between two mountains and then the real ascent started. On hand and feet, we crawled up a steep rocky slope, not quite steep enough to afford a rope but very challenging nevertheless due to the altitude and steepness.

After about 45 minutes clambering up, we finally made it to the top of the rock. From here it was smooth sailing.

There is a small walled enclosure around both churches and the first thing we noticed was a group of women with small children and a baby eating some bread.  They wore flip flops and we wondered how on earth they had made it up here with all those small children. They were up here to baptize the small baby and ate some food after the ceremony.

One priest and one nun are permanently living up here. First, we walked around the rock to Daniel Korkor, a small church hewn into the rockface.

It consisted of only one chamber carved out of sandstone and had only a window sized door as opening.

It has some faded religious paintings of the 14th century but nobody knows exactly, as not all of the paintings had been properly dated by experts.

The church had only a small stone ledge in front of it on where to stand and a 200-meter sheer drop going down.

It had grandiose views of the entire valley but the drop was heart stopping.

Maryam Korkor, the main church on to of this rock was a much larger church, 17 x 10 meters in ground space and fully hewn out of sandstone, including the columns, arches and windows. It must have been a back breaking work to get it finished.

It had some less preserved paintings on the walls, but was pleasantly cool in the inside.

The way down was faster albeit we often used hands, feet and butt to get past the very steep parts. A bit exhausted but happy we arrived at our car again. After a pleasant and refreshing lunch in our magnificent lodge, we tackled the second trip of the day. This time, we would told, we would be needing the harness.

Abuna Yemata Guh is a small church hewn into the sheer rock face of a vertical pinnacle of rock. The ascent is only for very brave people, with no vertigo whatsoever (which of course excluded Esther from the start). She made it to the base of the rock face but not further. While walking up a steep slope, wheezing like a steam train we saw cute rock badgers.

Arriving at the rock base, and after some wait to get the heart rate down again, Chris put the climbing harness on and his shoes off (no shoes on sacred ground!) and set out barefoot with two guides to climb up the last 50 meters to the church.

Once the first 15 meters were over and the harness put aside again, Chris heart rate went up again – this time not due to the thin air but in looking at the final scramble and precarious ledge walk over a 200-meter drop.

A trust in one’s own abilities or devotion wanting to see the church. Definitely not the right place for Esther up here. Having made the whole way up Chris was wondering how local families have brought their newborn babies up here to be baptised, and even carried corpses up to be buried on the mountain.

The church itself is spectacularly sited within a cliff face.

Inside are beautiful and well-preserved frescoes that adorn two cupolas. The church was hewn from the rock of the mountain around the 5th century by an Egyptian priest named Father Yemata.

According to the current priest nobody has fallen down yet on his way up. Immediately Chris was wondering: What about the way back down?! He donated 100 Birr to the priest, just to increase the odds of a safe return.

Luckily all went well, the only minor issue arose when the three additional (and unrequested) helping hands on the way back down didn’t seemed happy with their tip of another 200 Birr. That’s when Gashow made them clear that tip is not compulsory and that we were not the gloden goose.

Clambering down carefully we were soon at our car again. It was a great day hiking, climbing and looking over a fascinatingly dry landscape.