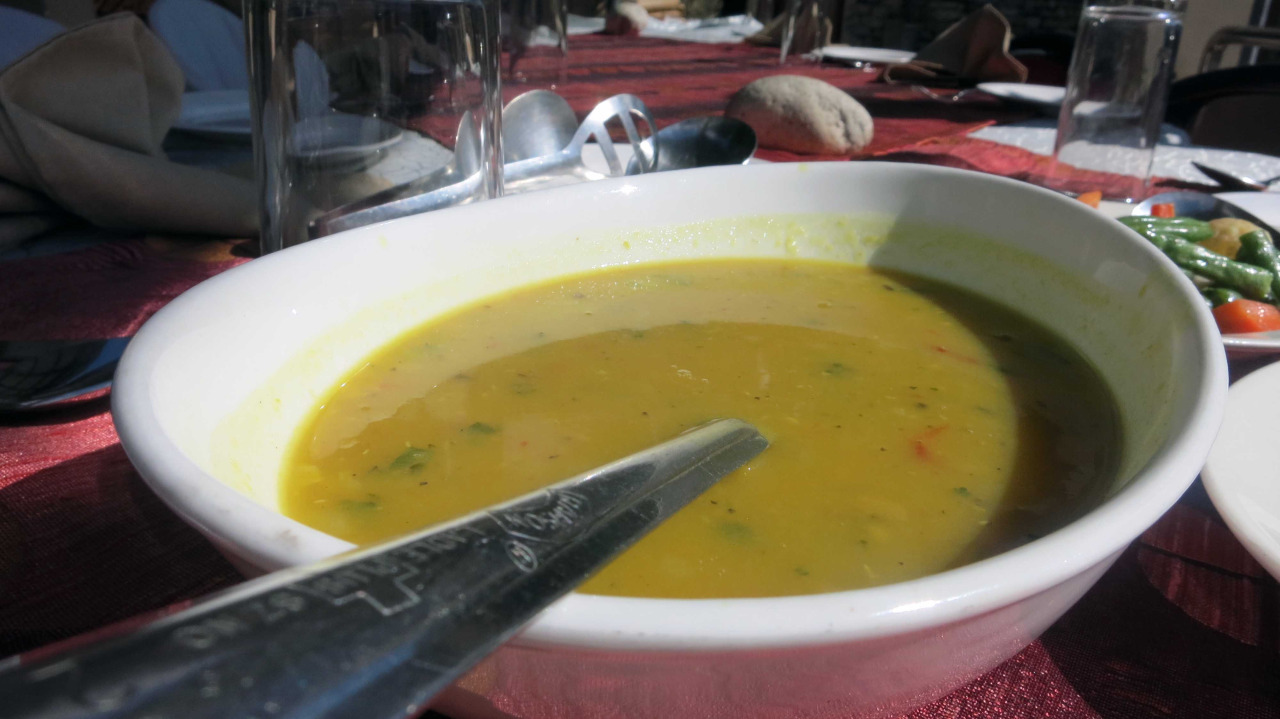 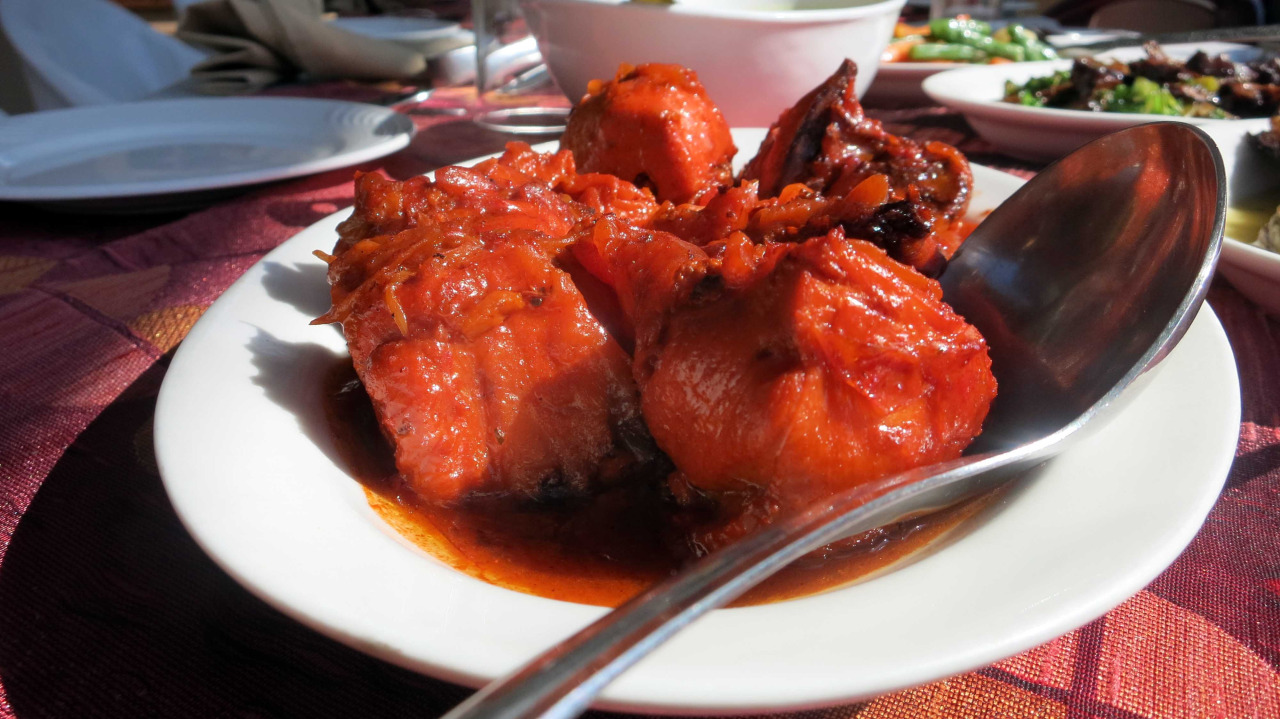 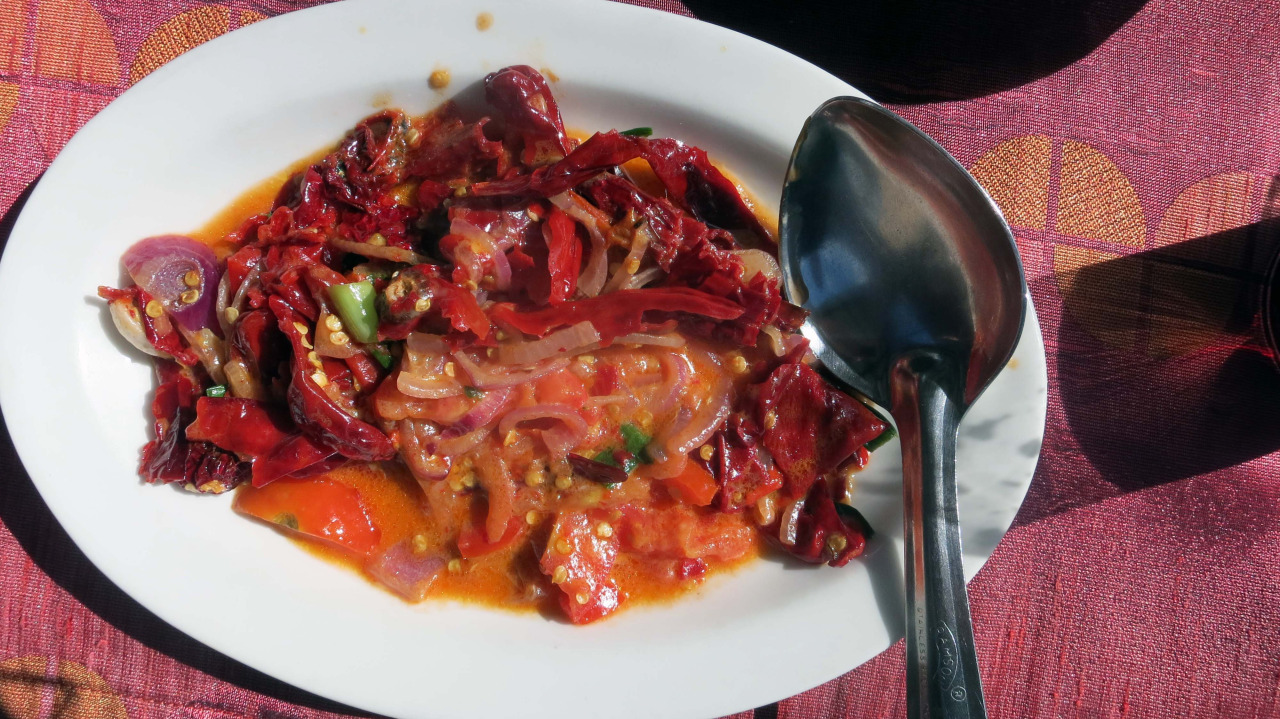 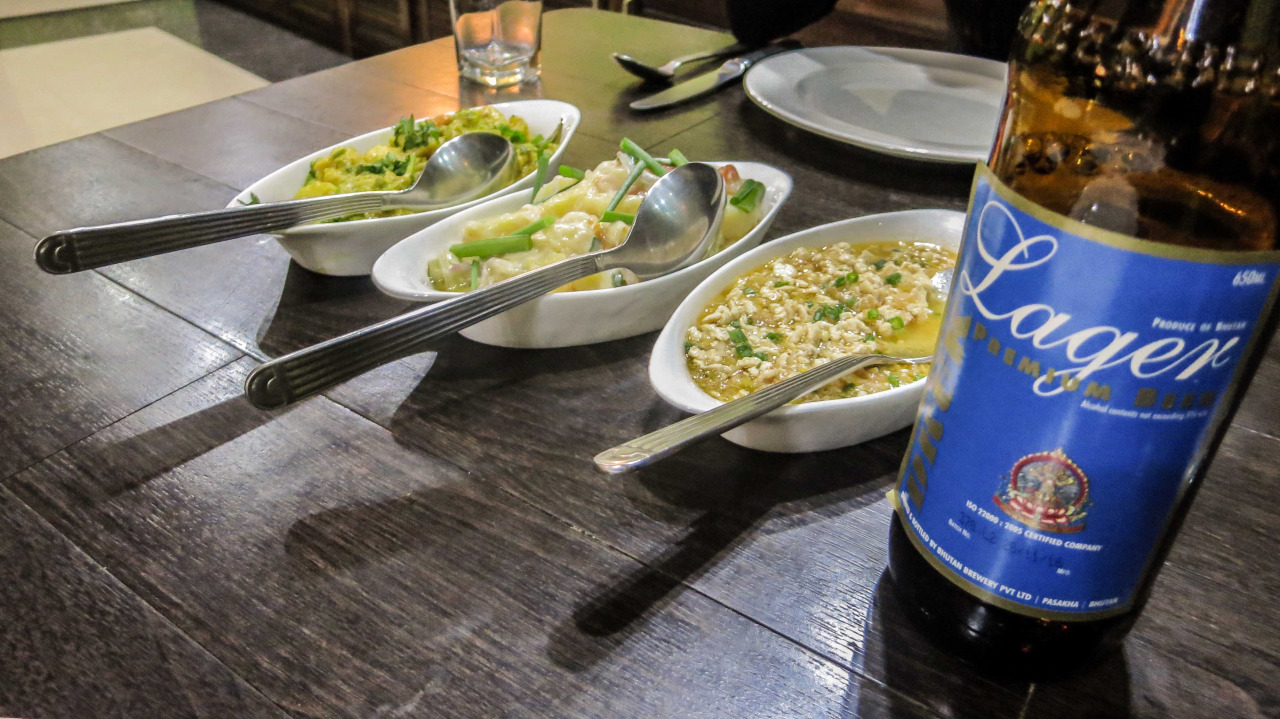 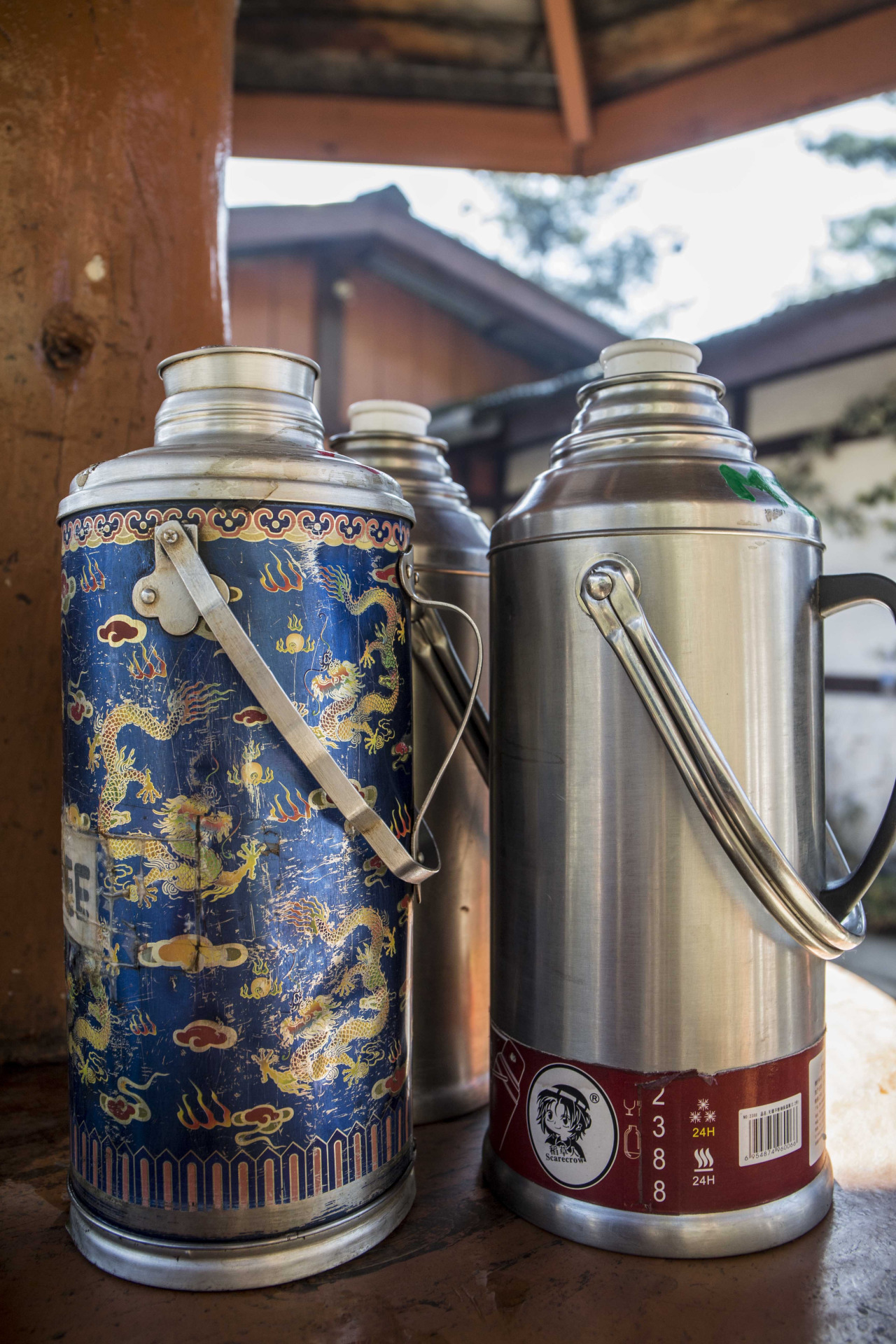 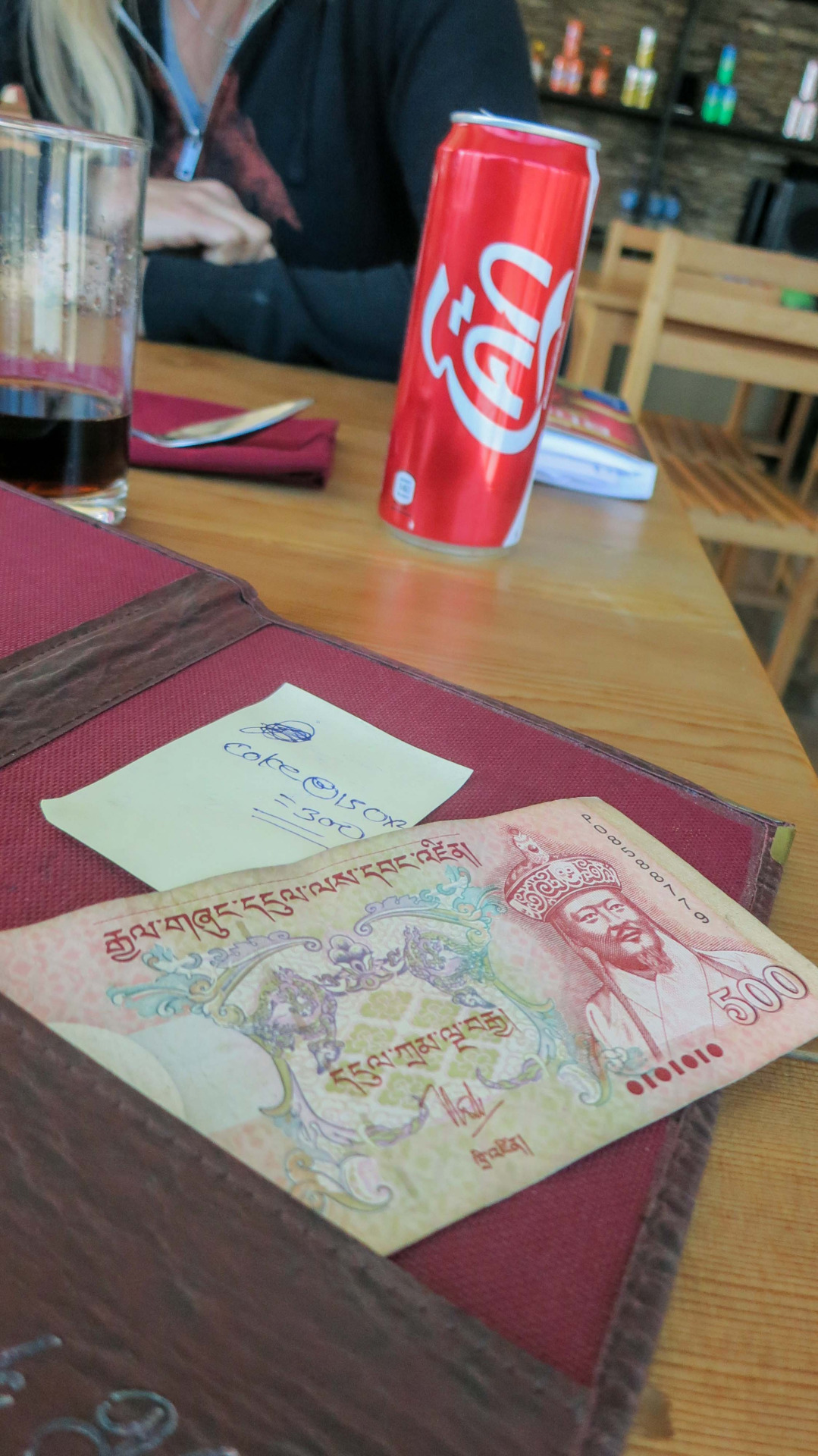 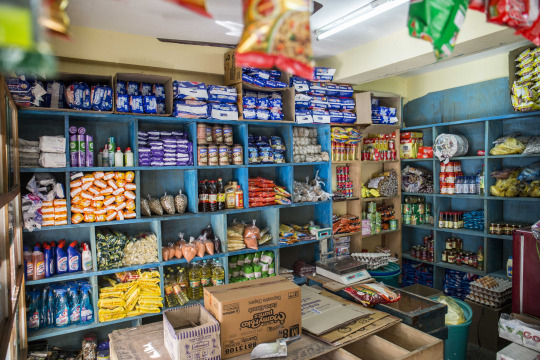 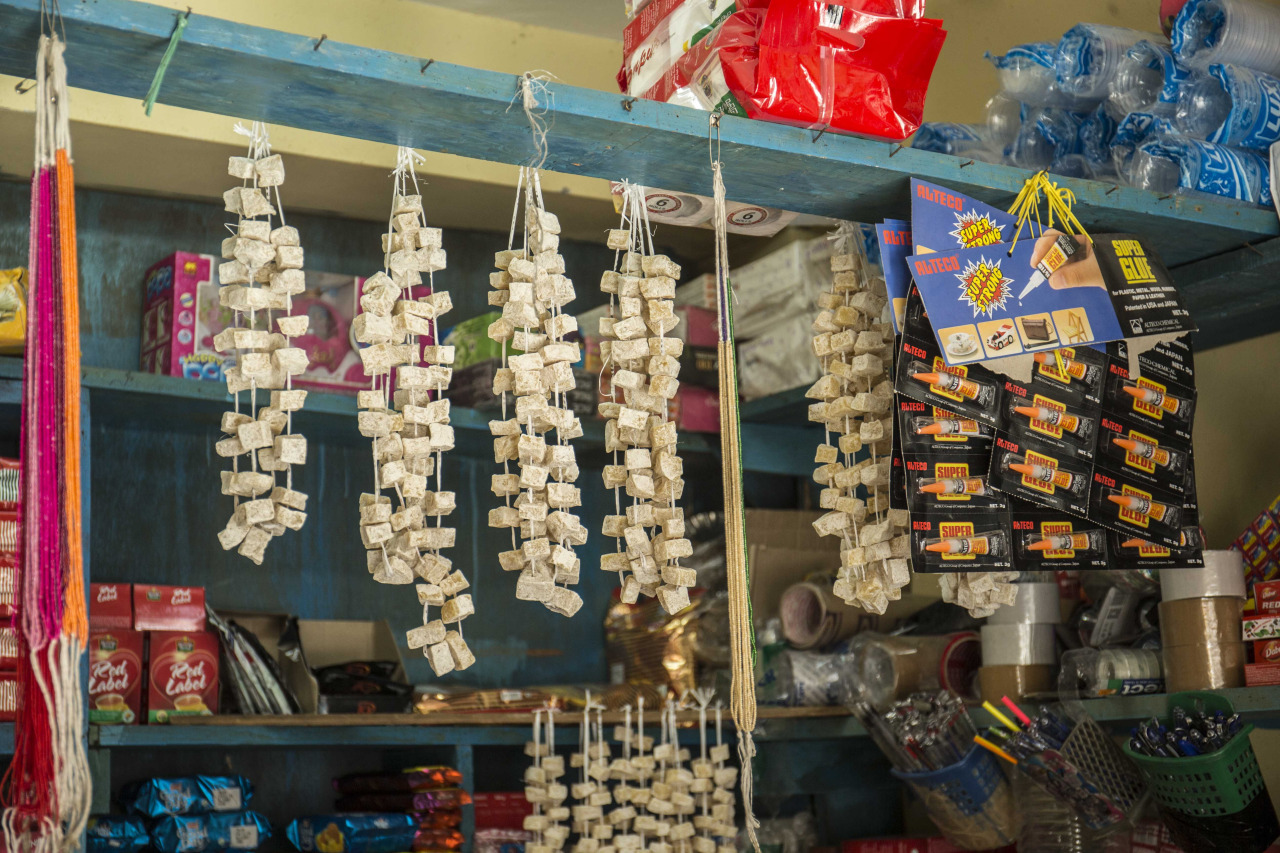 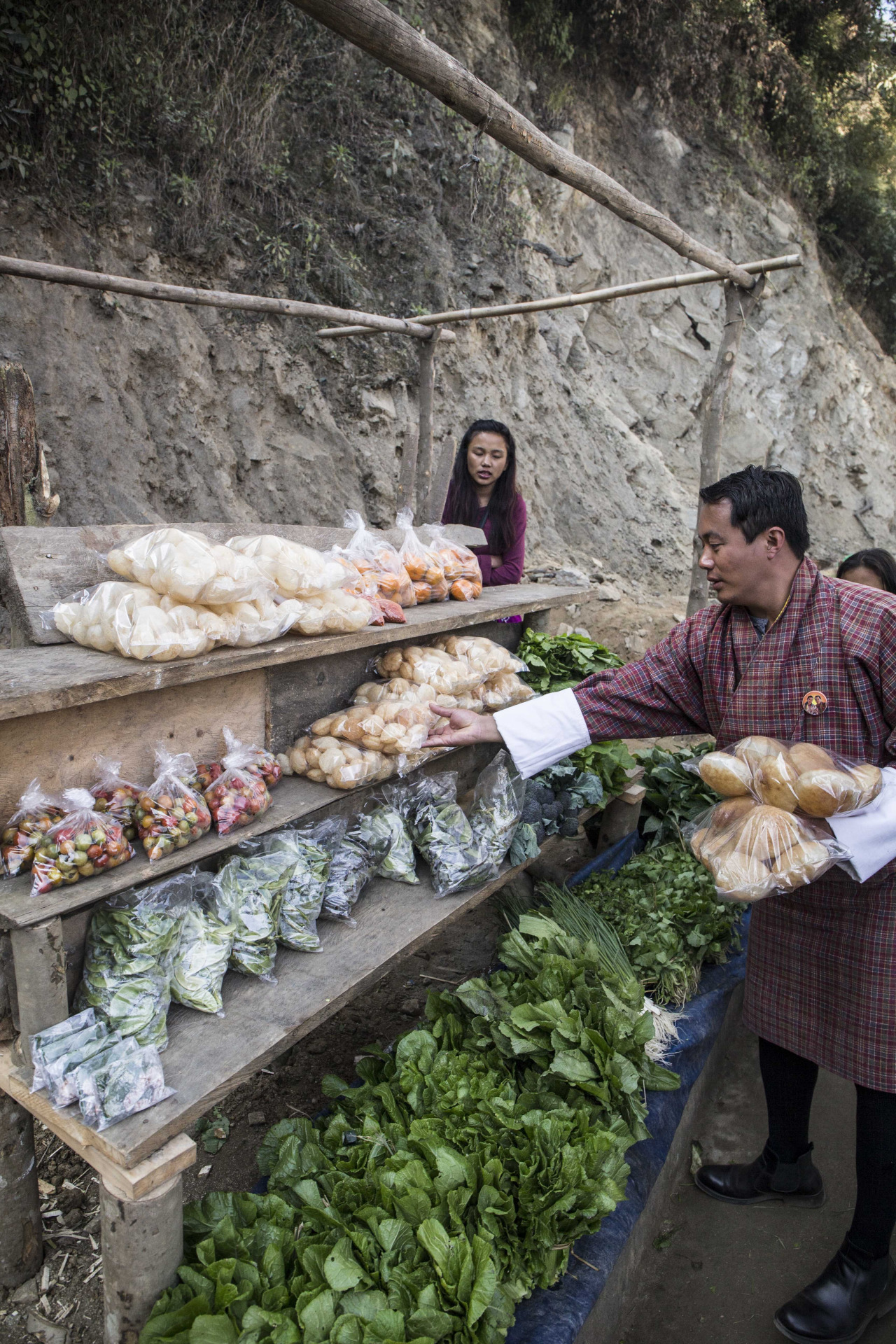 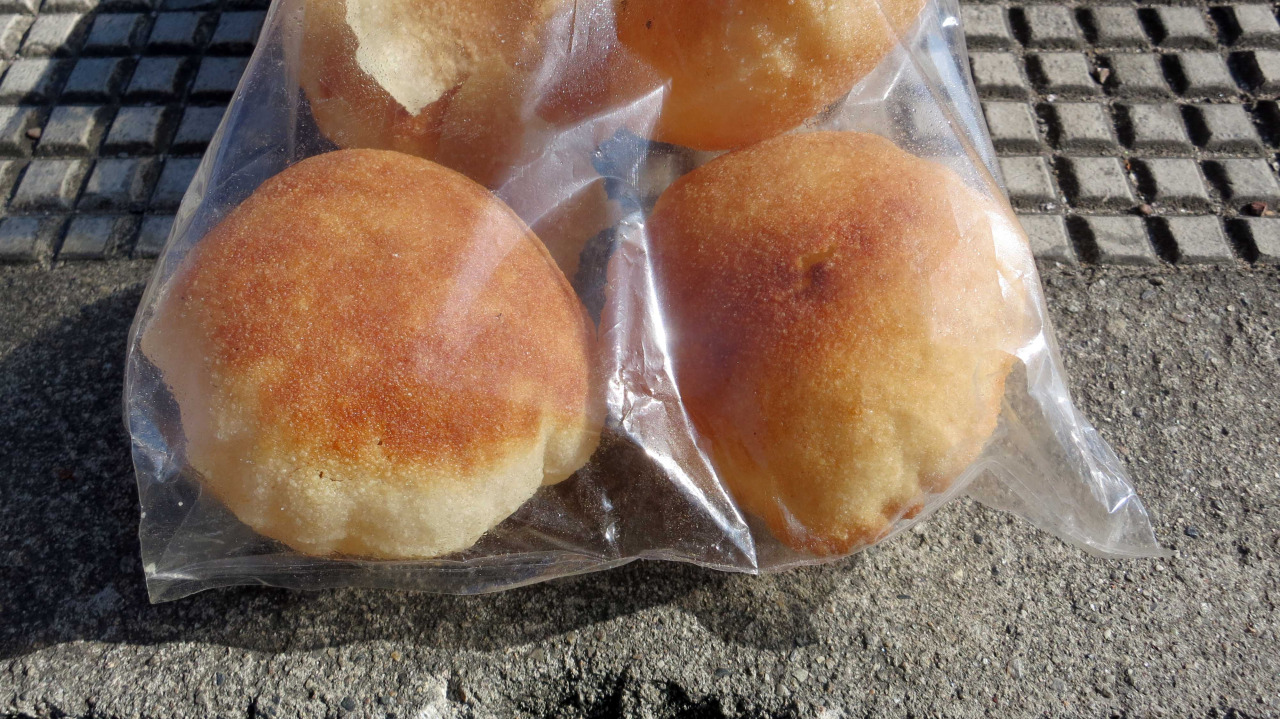 Now a special chapter about our culinary journey in Bhutan. Chris complained, that he never takes pictures of food plates (#foodporn), but eventually he made an exception for this blog.

At first reading about the food in Bhutan Chris had severe concerns that he’ll be ending up snacking on energy bars and Coca Cola for the duration of three weeks. Luckily quite the opposite proved to be true.

Bhutan is a curious mix of their own cuisine, mixed in with Indian and Chinese/ Tibetan influences. They certainly have own dishes and drinks, but borrow a lot of the spices from other cuisines, such as curry, cilantro (Koriander) etc.

The always eat freshly prepared meals with lots of vegetables. Freezers are unknown here and food is always prepared at every meal. The electric rice cooker must be a god sent for them, as every meal is served with rice as the staple basis food. Bhutan grows its own rice which is red but also imports a lot from India.

THE national dish of Bhutan is Ema Datse. Ema Datse is a simple mix of chilies and cheese, sometimes mixed with tomatoes and spring onions served with red rice. To say that this is a hot dish is an understatement. We are using chilies (red and green) as a spice to make a dish spicy and hot, the Bhutanese take this to a new level and make the entire dish out of chilies, like a ‘Paprikagemüse’. Needless to say that it is impossible to eat a full plate of it. Bhutanese eat at least 4-6 plates of it every day.

Food routine in Bhutan usually consists of four meals a day ( 8 am, 10 am, 3 pm, 6 pm) and is always rice, Ema Datse and maybe some other dish as well. To have your mouth burned numb at 8 AM simply was too much for us. We bravely sampled each Ema Datse put in front of us, (which was basically at each lunch and dinner) but we could only eat one spoon full with a whole plate of rice and plenty of non-spicy food in between the next bite of Ema Datse.

There is usually no menu in Bhutan and you eat what you get served. This consists (for us tourists) mainly of a variety of dishes (vegetarian and not) with various degrees of spiciness. With one or two exceptions all the food was absolutely delicious and Chris’ concerns vanished into thin air.

The concept of a three course meal is unknown here. The Bhutanese do eat soup, but only as an add-on to their main courses. It’s mostly lentil soup. The concept of dessert is not known and so they only serve tourists some fresh fruit at the end of a meal (mostly mandarins or banana).

Besides many vegetable dishes that are often made with a cheesy sauce, Bhutanese do eat meat, mostly chicken. Nobody has taught them how to cut it though. It seemed to us that the pieces get chopped willy nilly into smaller chunks, regardless of bones etc. At one point in time Esther stopped eating chicken, to not choke on another hidden chicken bone.

One of the very yummy dishes are momos. Momos are steamed dumplings filled with either vegetables, meat or cheese. As a snack the Bhutanese eat either very hard yak cheese on a string to nibble on or crunchy gigantic rice crackers that look like our German ‘Krapfen’ but are totally hollow, crispy and not sweet. Those are called Meykhu.

All vegetables are grown locally and are very fresh, so is the milk, butter and cheese, fresh from the cow or yak. Produce is mostly sold at weekend markets or at street stalls at the side of the road if it is not grown in their own back yard or homemade. Even hotels have their own vegetable gardens. The ‘supermarkets’ here are small little shops. No chains whatsoever, not even in Thimpu, the capital. Fast food chains like Subway, McDonald or Taco Bell are unknown here and are not allowed. Although I saw a Momo Bell once, that stole the Taco bell logo for its purpose ;o). Coffee chains like Starbucks are also not allowed to be opened.

Drink wise, Bhutanese drink butter tea in the morning, which is more of a soup made from free bark and is an acquired taste. It’s also taken to picknicks in colorful decorated thermos flasks. They do brew local beer and the ‘Heilsarmee / Salvation Army’ has the right to brew Whiskey. They do like their liquor here, so that’s a bit of a problem.

Otherwise the Bhutanese eat much healthier than we do and the food generally does taste great. For those of you who want to get deeper into it, google for shel roti, philu, gunduruk, haapi chugo, dzaw, jaa sip, puta, kharang, khule, zoe thue and ezay (chili salad)…