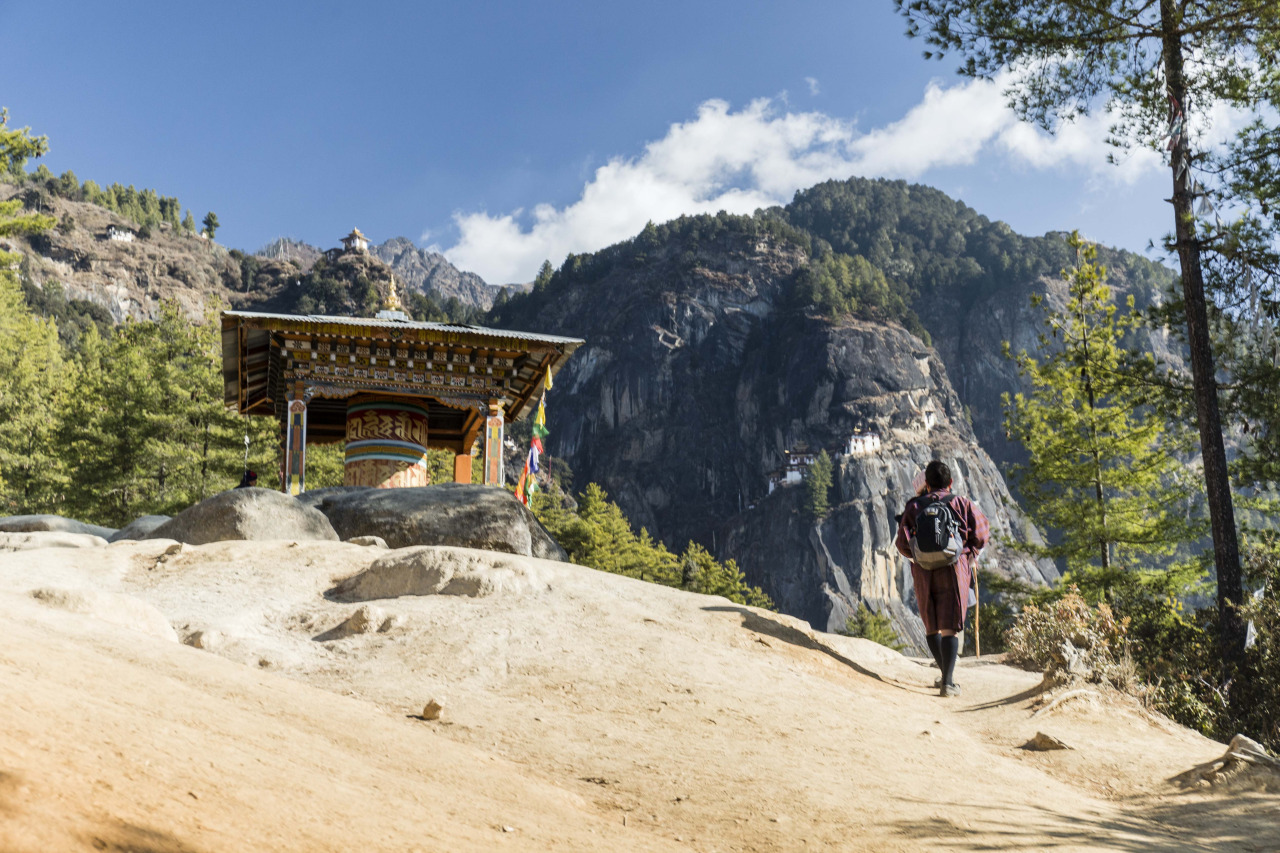 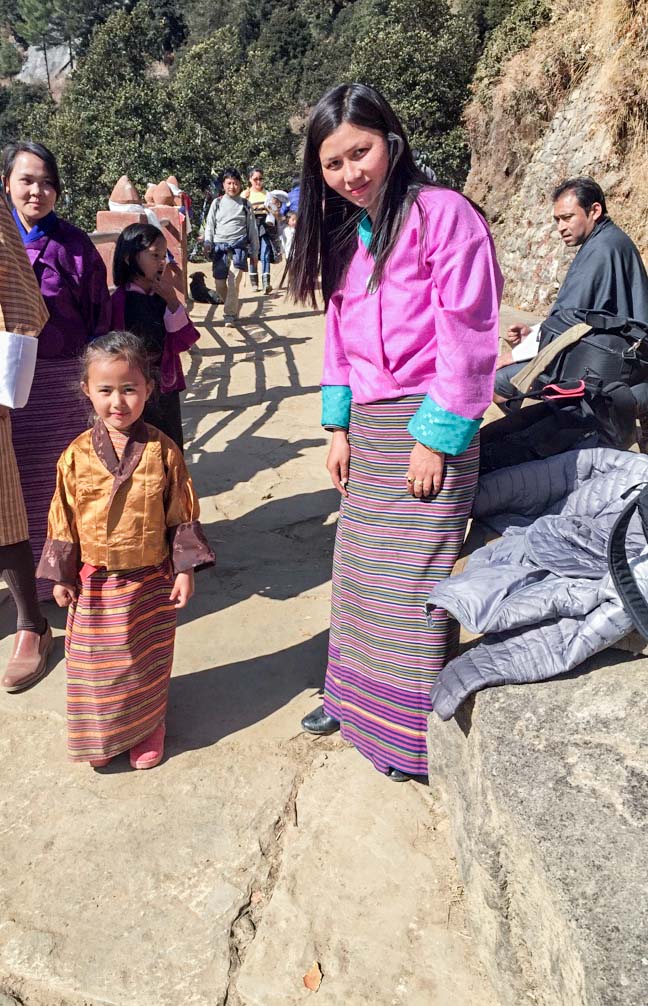 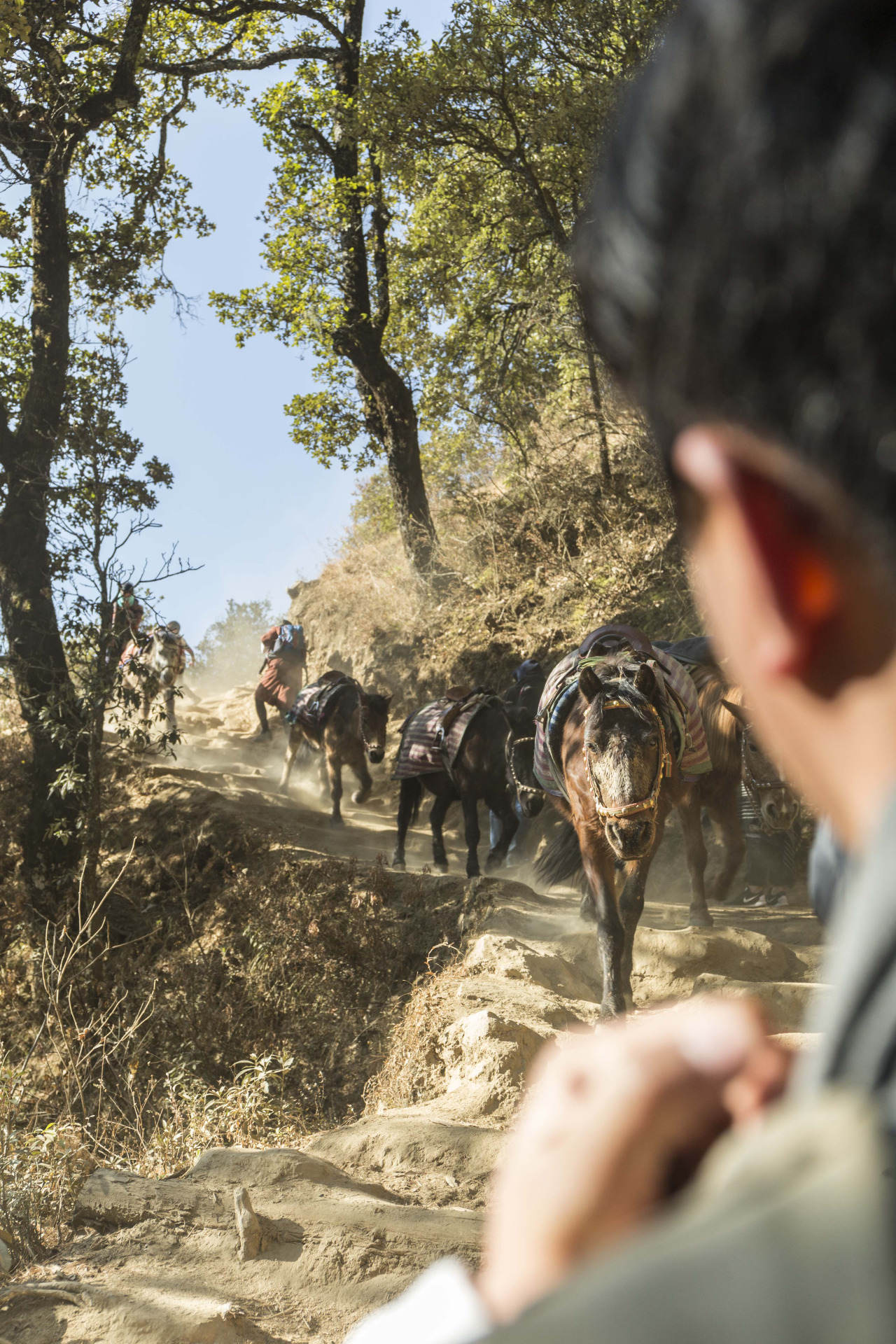 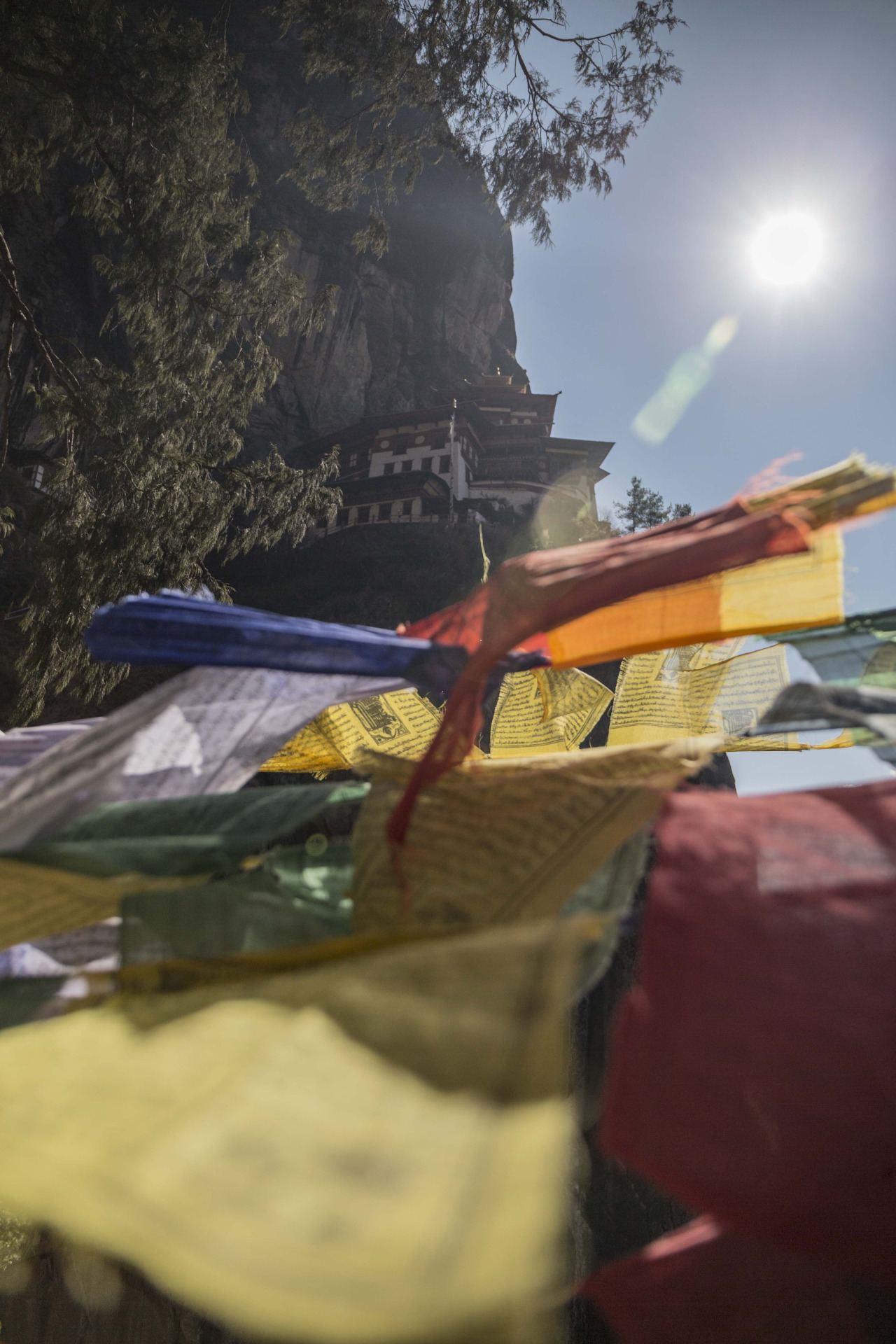 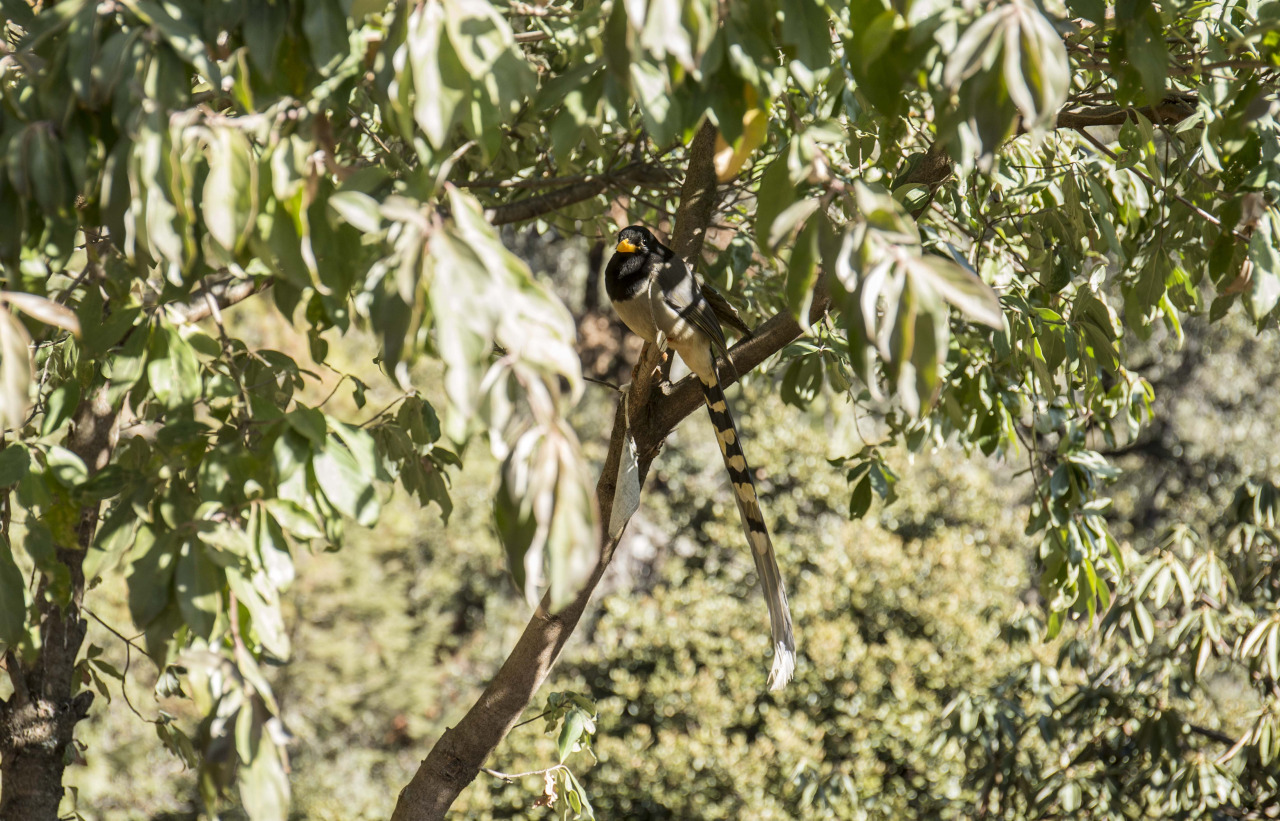 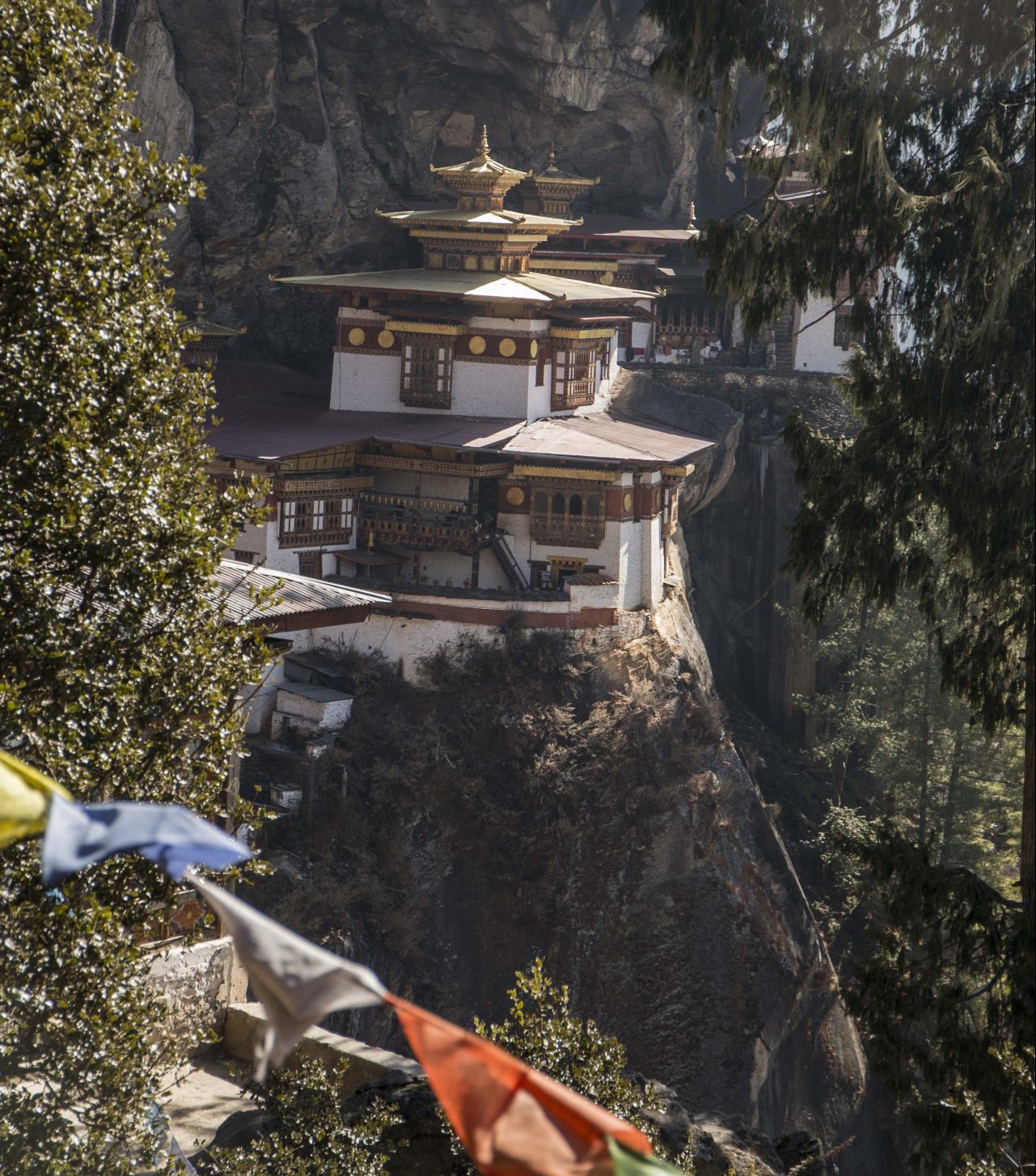 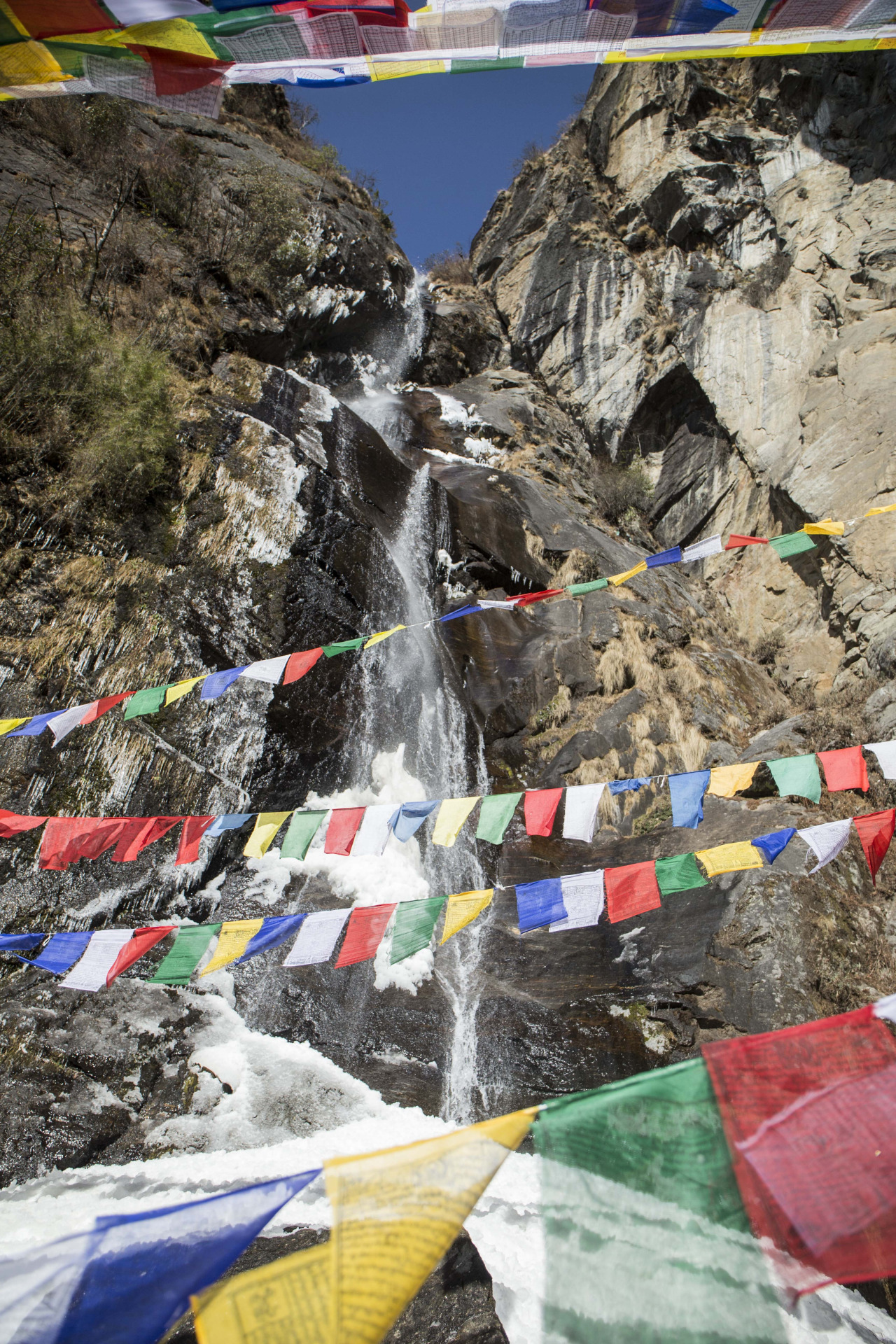 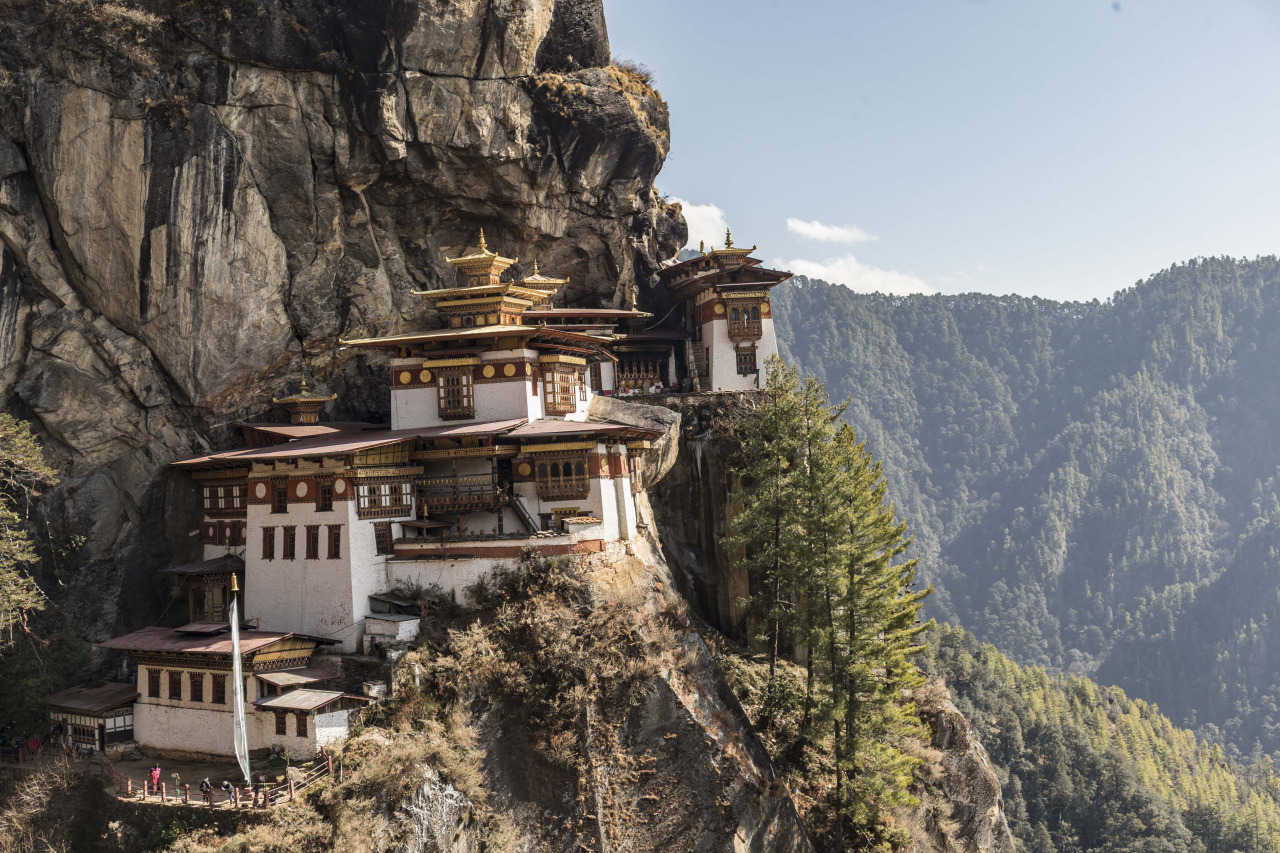 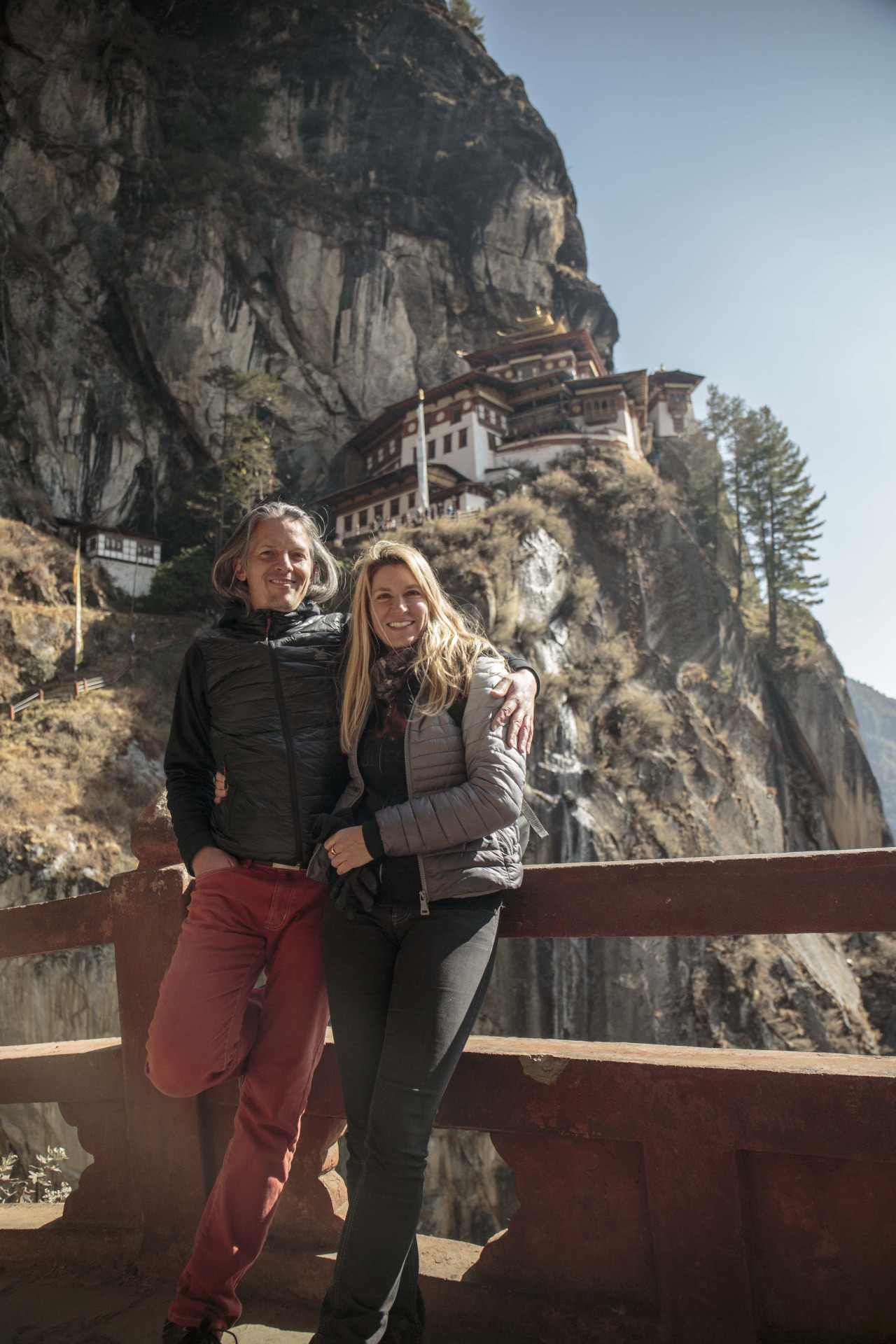 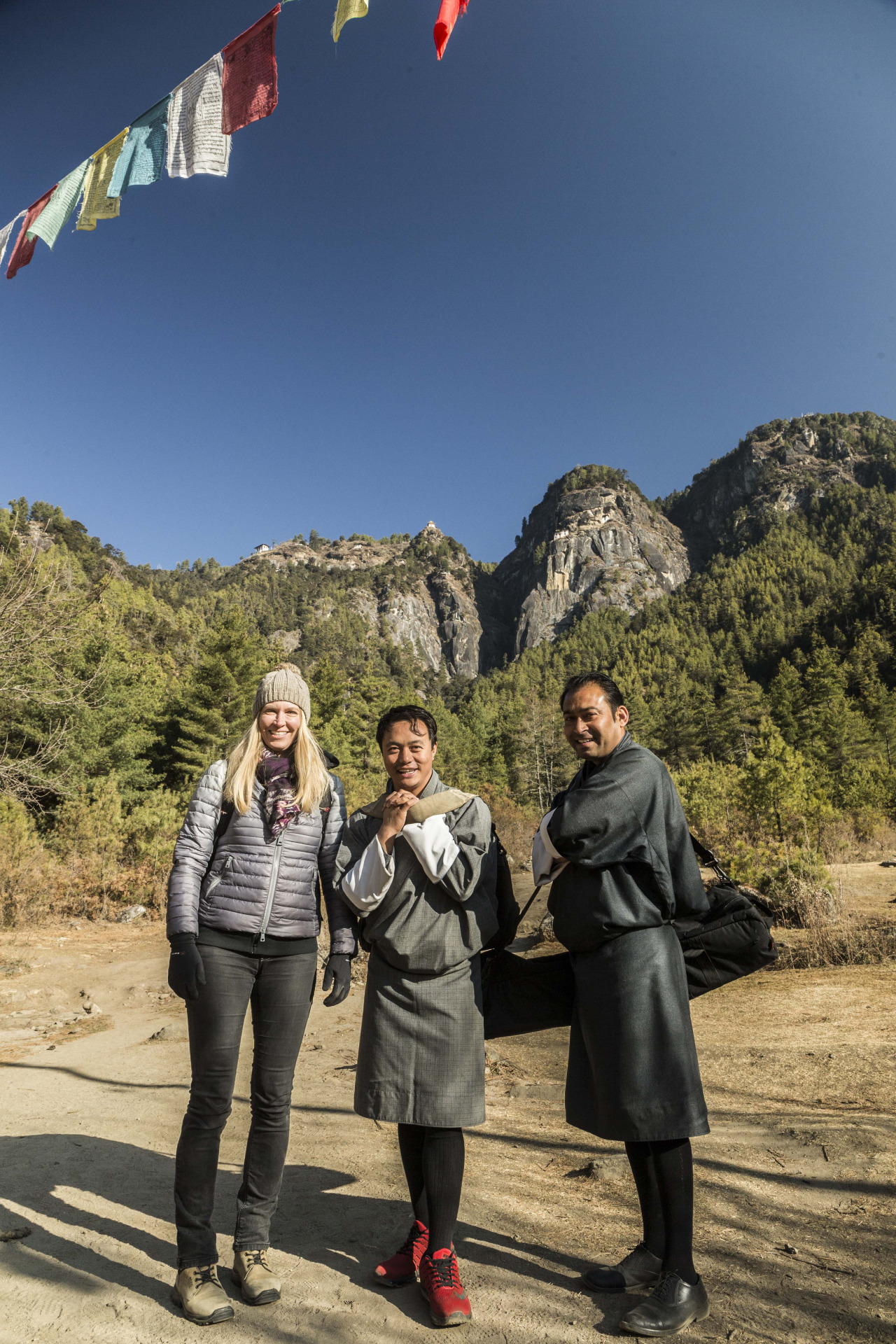 Waking up early the next day, we kept a real highlight for our last day in Bhutan. The hike to Taktshang Monastery is the most famous hike in all of Bhutan. Taktshang, or better known as the ‘Tiger’s nest’ is a monastery that has been built, no glued to a sheer cliff wall high up on a mountain at around 1649. It was destroyed partly by fire in 1998 but rebuilt with the help of a temporary cable car.

The legend has it that Guru Rinpoche flew there on the back of a tigress to subdue local deities that were bothering the people. The original cave before it was covered by the monastic walls was in the shape of a tiger’s mouth and is opened only once a year for a few days.

This is the holiest of all places for Bhutanese and a real marvel to look at. There is no other way to get there than to go by foot on a five hour walk. It takes about three hrs to get up to the monastery and about two hrs down. (fun fact: the lazy ones under us can actually rent a pony to carry them about 2 thirds of the way up, but then you only get half the blessings, the pony gets the other half  ;o)

We went there early as it get’s quite hot with most of the way being in full sunshine. We each had our little day packs and originally had planned to rent a pony for Chris’ camera equipment. But Norbu and Govin decided that pony was not necessary and so they carried the camera equipment all the way up!

We were amazed at who took on the challenge of this hike. We saw many locals doing the hike up in full traditional garb (Kira for women, Gho for men) as it is required when visiting a holy or official place. Old ladies in Adiletten, little kids that could barely walk, old men with walking sticks, and a school class from India that looked more as if they were about to visit a Bollywood studio. High heels and glitter in the mountains! Everybody was carrying small bags of food and donations up the hill.  The hike and visit of Taktshang monastery is for Bhutanese what Mecca is for Muslims. Once in a life time you have to do it and it gives you a huge amount of blessings (kind of religious brownie points).

In the middle of the way up we suddenly heard a whistle and a shout to step aside. We could barely jump to one side of the path when a whole pony herd trotted past us in a fast clip. Those were the first ones up and as tourists usually  walk down, the ponies run down waiting for the next passenger. If they were smarter, they would take their time down… But Esther always knew: horses are everything but smart.

Catching tantalizing glimpses of it on the way up (it is about 1,000 meters altitude difference between valley and Tiger’s nest and at approx. 3,000 meters height one starts to wish for an oxygen bottle once in a while). It was a brilliantly sunny and clear day and we made it up in just 2.5 hrs .

One more waterfall to cross and a last hike up some steep steps and we stood in front of the big gates. The monastery is simply breathtaking. And pictures can’t really describe the feelings on people’s faces all around us. It does not matter how long some took or how frail and old or young they were, they all had absolute amazement and reverence on their faces, some even tears. For some a life’s dream had become true. It was  a quiet place, high on the mountain cliff with an icy cold wind blowing and ice crusts on the ritual offerings of water on each altar.

We had to hand in cameras and phones at the very entrance, so there are no pictures from inside. Taktsang monastery is not just one temple, it is like many others a series of temples stacked on top of each other and glued to the walls of the mountain. Our feet were numb from cold after temple number one already (shoes outside!) but that was small price to pay to quietly enjoy the serene atmosphere and by watching the people around us. There were not many tourists. Most were local Bhutanese.

At the end of our visit we lit some butterlight candles for friends who recently lost their loved ones, made our donations and felt blessed to have spent the last three weeks in such a wonderful and peaceful country, getting to know people that do not only strive for their own advantage, but that of a whole nation and our planet. It was refreshing to see this different attitude from such a small country whereas everywhere else one’s own advantage seems to be in the foreground.

We sincerely hope that the next phase of their development will allow them to stay true to their beliefs and culture while opening themselves up further even though it will not be easy.

We also hope that we could give all blog readers, especially our friends and family, a glimpse of this wonderful country that most will never visit in person. This concludes our journey to the land of Druk Yul, the thunder dragon. Good bye. 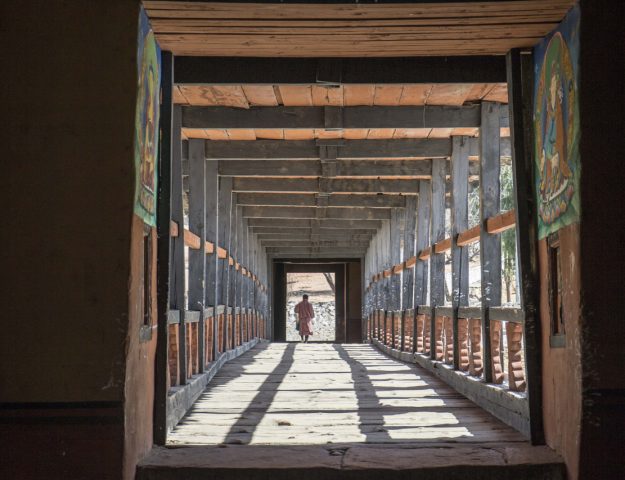