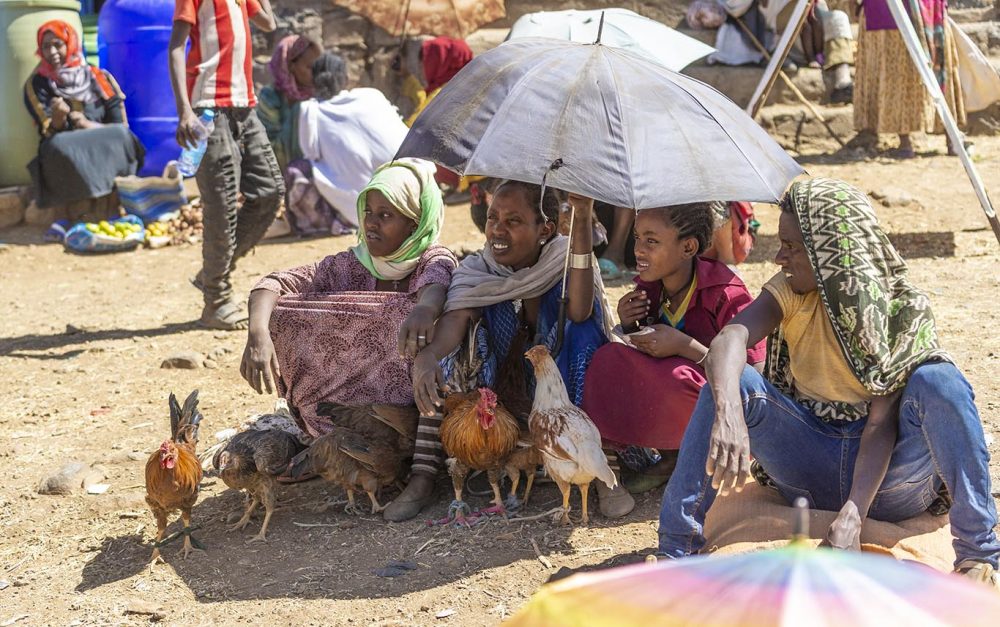 Early start today to the Blue Nile Falls. When we drove through town and out the other end, we noticed a gloomy looking area, smoke rising up with birds flying above. We stopped, climbed up a bank and saw what must have been the backdrop for Armageddon in front of us.

Mounds and mounds of trash with thousands of birds hovering on it or circling above. A Hitchcockesk doomsday end of world scenery… Most birds were Marabou storks or vultures. It was eerie looking. It was the city’s dumpster and the European mind can only shake its head…

On we went to the Blue Nile Falls. While it’s only 40 kilometers from Bahir Dar, 35 of those are on dirt road. Our diver “slalomed“ his way between mini busses, heavily loaded donkeys, mule drawn carts with sugar cane piled high or simply pedestrians walking to the market, carrying with them the goods to be sold.

No white folk anywhere to be seen. Kids running in school uniforms to their school buildings, farmers working on their fields the traditional way, ploughing with ox drawn ploughs and women cooking and sowing on the side of the road. Most houses were simple wood pole constructions with sheet metal doors and windows. Not all had electricity connected to their homes. We saw no begging going on and no one seemed to go hungry, with all the crops that are growing here. Onions, potatoes, sugar cane, khat, coffee and cotton. Ethiopia is a very fertile land around Lake Tana and the Blue Nile.

Leaving our car behind, we walked on a small foot path for about 30 minutes against an ongoing traffic of donkeys, peasants, goats and cattle, all going into the opposite direction to market. Some come from as far as two hours away. Sometimes narrow bridges force us to pass slowly. The oldest stone bridge dates back to the 16th century built by Europeans and is still very much in use today.

Climbing up again and circling another bend the view was great. The Blue Nile Falls span across from us along a length of several hundred meters. Unfortunately, only during the rainy season is the complete fall full with water. Now in the dry season, only two spouts of water are really visible. In addition several years ago a hydroelectric plant was built and that deviates most of the water away from the falls. Nevertheless, refreshed by the waters spray we hiked on to our waiting boat to take us across the river again and back to our car.

It was nearly lunch time and we ate at a wonderful restaurant overlooking Lake Tana, Ethiopia`s largest lake. Ordering from the menu is rather tricky here as the English translations (if there are any) are very far fetched and what you think you ordered and what you get are often two different things. Same here. Ordering an egg salad sandwich does not get you hard boiled eggs with mayonnaise on a thin toast. It gets you a thin, plain omlette on a large bun. You will also find Pizza and Spaghetti on many menus. We thought first it’s food for tourists who don’t dare to eat the local Injera, but it seems it’s due to the Italians who occupied the country for some years. We’ll have a food blog entry coming …

In the afternoon we took a small boat to one of the peninsulas with one of the oldest monasteries. Ura Kidhane Mihret, built in the 16th century. It`s a big wooden structure, round on the outside but square on the inside. Many of the paintings were `refreshed` in the 18th century so they all looked quite new and shiny. Our local guide (you have to pay a local guide in order to support the local community) had his own interpretation of Christian history – which was fine with us as our knowledge of the various biblical episodes was not too profound to start with.

Interestingly when you compare our travel book, our guide and the internet, one will never find exact matches. So one of the hanging stones that emit a hollow sound when you tap it with another stone was declared a signal to prayer in one source, a signal to dinner in another and an alarm in a third…. Pick which one you like best …

On our way down we had another coffee ceremony and it was really hard to escape the many little stalls that sold religious tourist artifacts. There were just no tourists to distract their attention away from us. So we learned our second word after ‘Thank You’: ‘Al Faligem’ which means ‘I don’t need’. Back we went by boat. After crossing path with some Hippopotamuses on our way back we decided to make it a lazy evening, dining in our lodge again.