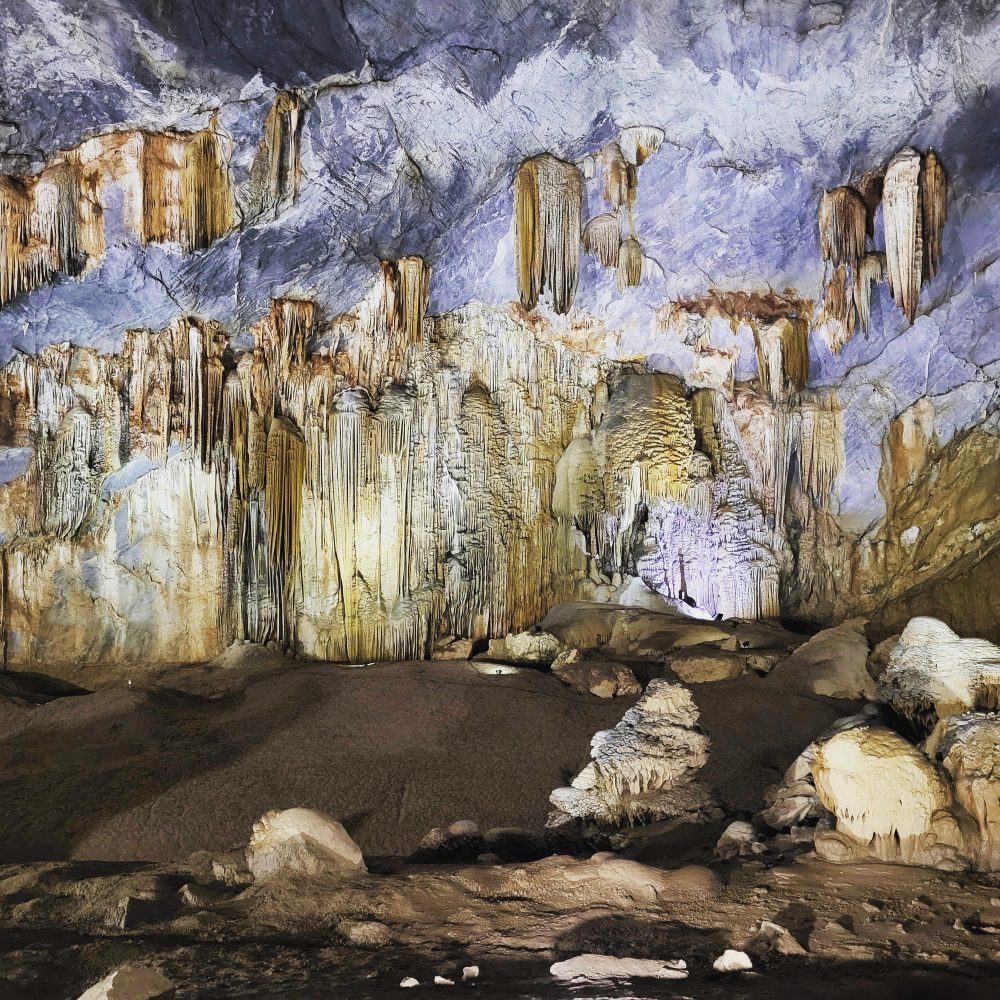 Today the weather gods again were not favorable to us. We are staying in a very nice lakeside resort with beautiful views and a bungalow directly on the water – but at 15 degrees and drizzling rain, we don’t feel like swimming, kayaking or hoping on a SUP.

Instead we chose what is the best thing to do on a rainy day: visit some caves. We chose two great caves, one on foot and one by boat.
Fearing that we’ll face a crowd of tourists in a confined space we asked to start the day early and our guide Ngoc agreed. We set out at 8 AM and 30 minutes later we arrived at a large empty parking space in front of Thiên Đường Cave better known as Paradise Cave. Not to imagine what this place looks like with thousands of tourists in the summer.

We were literally car number two in the parking lot. Setting out on a leisurely walk for about a mile, declining the golf cart, we arrived at a set of stairs and had to climb up for about 15 minutes. Our thighs were burning at the end of the climb. After a short rest we descended a hundred+ steps again into the cave mouth of Paradise cave. This cave was only detected in 2005 by a local farmer and only 2010 made accessible to the public. It lies in the middle of Phong Nha-Kẻ Bàng National Park, one of the UNESCO world heritage sites.

In order not to destroy the cave interior and natural set up by trampling tourist feet, a wooden walkway and stairs were installed to protect the cave. With its length of one kilometers, it figures in the Vietbook (Vietnamese Guinness Book of Records) as longest wooden bridge in Vietnam.

The cave mouth is not large and so one has no idea about the vastness of the cavern hidden behind it. A huge open space becomes visible after climbing a few steps down into the cave. Stalagmites and Stalactites are visible everywhere and some have reached enormous dimensions over the millennia.

It is truly a breathtaking sight wandering through the ancient rock formations nearly all alone in the cave. We were so lucky. It was quiet, one could hear that many drops splashing down from the cave ceiling and its many cracks. Bizarre shapes had formed and are still growing today. The entire cave is lit and so one gets a very good sense of the huge dimensions of the cave.

The ceiling is at places more than 70 meters high and the width can span 150 meters across. We felt privileged to have that cave nearly all to ourselves where otherwise thousands of tourists shuffle through. The noise level must then be awful whereas it was completely silent for us except for the dripping water and one lone singing bird that must have gotten lost in the cave. That little chap was singing his heart out on top of a stalagmite and looked really lost.

The wooden walkways only get you one kilometere inside the cave, the other 30 kilometers of the entire cave length are not open to the public with the exception of some overnight expeditions under the right circumstances. The cave is partly submerged further down and so passages are only open during low water levels.
Walking out again we saw a wave of tourists flooding in after us and felt blessed again for having gotten here so early.

On we went to Cave number two, Phong Nha Cave in the same national park. Those two are only 20 minutes apart. We decided to go there at 11.30 AM as most tours are getting ready to have lunch during that time.

Phong Nha has been voted as one of the most wonderful caves in the world for a number of reasons: for its longest underground river, for its most beautiful underground lake. For its highest and widest entrance, for its most beautiful and widest dry cave, for its most beautiful sandbank and reef, as well as for its most spectacular stalactites, stalagmites and longest water grottos.
You can’t get there on foot, so we boarded a covered little boat. A line of blue boats were tied to the dock and we boarded one in the company of two girls from South Korea. We were only four passengers plus our guide Ngoc. It took about 30 minutes to get to the mouth of the cave with a slow, noisy diesel motor propelling the boat forward. We saw dozens of blue boats tied when we left and only one blue boat at the entrance to the cave, ready to leave.

Our boat captain had to check with authorities that we were good to go in. Only 20 boats were allowed in at one time. In peak season blue boats have to queue up and wait their turn to go into the cave. But we could start immediately and as soon as we reached the cave mouth the motor was switched off and our crew of two took up rowing the boat into the cave. The silence was a blessing!

Lit in similar style as Paradise cave, we glided silently on the river, deeper and deeper into the cave. The cave is a bit more than seven kilometers long, the river that runs through it originating from Laos, but at times not navigable. Either too shallow (so the boats only go 1.500 meters into the cave) or too flooded and then no tours can operate at all.
We were in awe looking at all the bizarre and beautiful rock formations. Here is where supposedly the NVA (North Vietnam Army) hid a huge stockpile of weapons for the fight against the South. And as the US tried to bomb the cave mouth during the war, they accidentally enlarged the cave mouth even further rather than having destroyed the entrance which was the original plan. We did not meet a single other boat on the entire trip inside the cave until the very end.

Right before exiting the cave one could hop on one of the sand banks and walk the remaining 100 meters on foot. Some views nearly looked like paintings. Absolutely beautiful.

Again we were the only ones walking the last 100 meters so we had the place to ourselves for as long as we wanted. Walking out of the cave mouth one passes the obligatory little stalls selling souvenirs, food and drinks. Business must be tough on a rainy day and off season. Our boat was the only one tied to the quay waiting for us to arrive and drive home.

Just as we set out on our return journey we could not believe our luck, as we saw six full blue boats turning around the corner and starting their journey into the cave. Again we felt blessed by our luck having been here so early. For the little stalls this is good news though as tourism is their biggest source of income and easier than the hard farm work.

Back at the dock we had a yummy late lunch in a local restaurant and felt we definitively needed to walk some of that good food off. Only item on our afternoon schedule was the Phong Nha Botanic Garden about 30 minutes away.
Not sure what to expect from a botanical garden in the middle of a natural reserve and with so many plants growing freely, we set out on foot with our umbrella as it had started to rain again.

Walking through a jungle path we saw various plants and trees unknown to us, porcupines and for a brief moment some monkey’s. Our destination was the Gio waterfall. We were in more for the exercise than having expectations to see anything remarkable on a rainy day with low hanging clouds. We were pleasantly surprised.

After a steep and rocky climb down, using ropes and little rickety ladders, lucky not to slip, we arrived at a small picturesque waterfall flowing into a basin that absolutely invited for a swim were it not for the drizzle and coolish temperature. On a warm sunny day we would have loved to dive in and get wet.

Ready to turn back and start our return journey, we were surprised when Ngoc started to climb up to the top of the waterfall on the right hand side with the help of some ropes and motioned for us to follow. Climbing with an (by then folded) umbrella in hand up on a slippery slope and holding onto a moving rope was quite a challenge.

It proved absolutely worth it. Up on what we believed the top of the waterfall was. Turns out the climb opened up onto the real larger waterfall not visible from below.

Due to the rain the waterfall was much more impressive than during dry season our guide told us. It was very picturesque and wonderful to watch.

We had to cross the stream and had to climb up more ropes and ladders to the real top of the fall, nearly slipping but happy and exhausted on the top. What a nice walk! It was nearly dusk by the time we arrived back at the car park.

We certainly had an action packed day today and we felt we made the best out of a bad weather day. The day calls for an early night and a good sleep…