Sheltering in the Vinh Mốc tunnels (from the rain) – Day 14 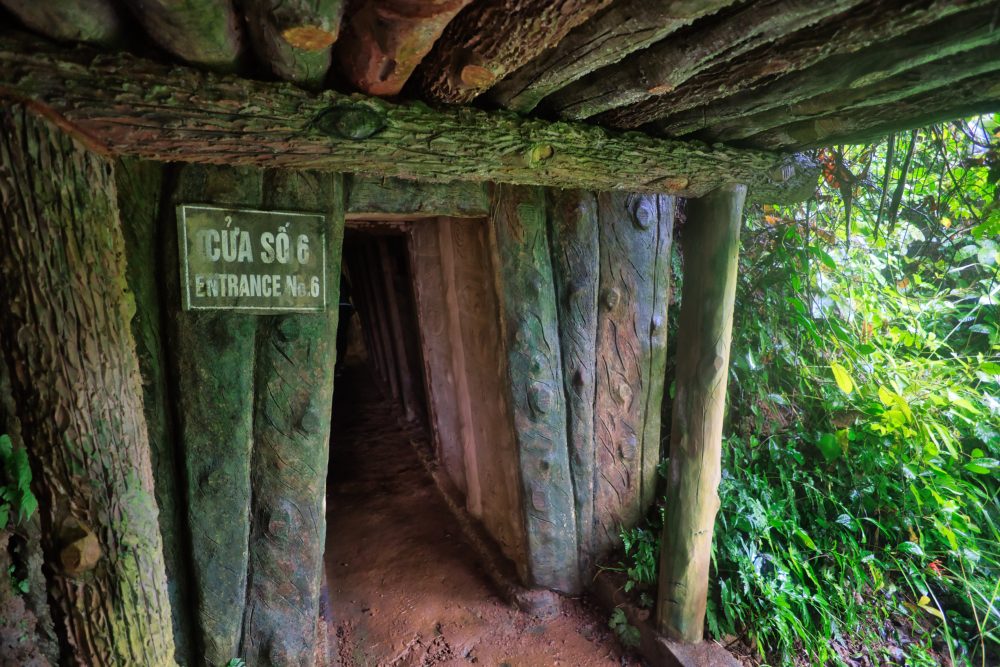 The hidden bunkers of Vinh Mốc

Today was mostly a travel day for us. Leaving the cave region and making our way by car to Hué. During the trip we have two stops planned: one to visit the Vinh Mốc tunnels and other on the demarcation line formerly separating North and South Vietnam into two nations.

We arrived at the Vinh Mốc tunnels during a drizzling rain adding to the gloomy atmosphere there. During the Vietnam war, one costal village was the target of unrelenting US bombing as it was known that many of the weapons deliveries for the insurgency in the south were going through Vinh Mốc. As a response to the bombing, the villagers dug an incredible series of tunnels underground. When they heard the bombers come close, the entire village of 90 families disappeared underground.

The maze of tunnels with ten exits/entries was dug into the clay soil by hand. Each tunnel was no more than 130 m high and maybe 50/60 cm wide. In total nearly two kilometers of tunnel were dug. The underground maze was built on three levels. On level one, about seven meters underground were the tunnels for the soldiers / fighters. Level number two, about 15 meters underground, housed the villagers. In intervals, small niches were dug out into the tunnel walls that served as sleeping and living space for each family. The space was only two meters by 120 cm and was no higher than 120 cm. Easy to become claustrophobic under ground.

The third level, another seven meters below level two is where the weapons and ammunition were stored. A few of the entrances faced the seaside so goods could easily and quickly be brought to and from shore into a tunnel. The other tunnel entrances/exits were facing the mountains as potential escape routes.

Walking crouched through those dark tunnels with sticky, stale air made one immediately uncomfortable and living down here for a longer period of time seemed awful.

While we had smart phone flash light functions on and some tunnels had a few light bulbs, in former times they only had candles to give a bit of light. No electricity down here.

It brought back the war and it’s gruesome realities to ones attention, especially as we have a war going on in Europe right now. We shuffled our way under ground through all the tunnels that we were able to visit and came away in awe of the sheer grit, wit and ingenuity by which the Vietnamese defended their country against the US.

Continuing on to the actual demarcation line between the South and the North, we entered into the DMZ (demilitarized Zone), a ten kilometer wide strip which was declared no man’s land between the two Vietnams.

Nobody was allowed to live here. Right smack in the middle flows the Bến Hải river.

We walked over the original border crossing bridge from the North to the South, the different color of the bridge as well as the white line on the ground making sure everyone knew were the two Vietnams met.

Arrived in Hué we checked into our hotel and pretty much called it a day. Enough rain, drizzle and sobering sights for one day.