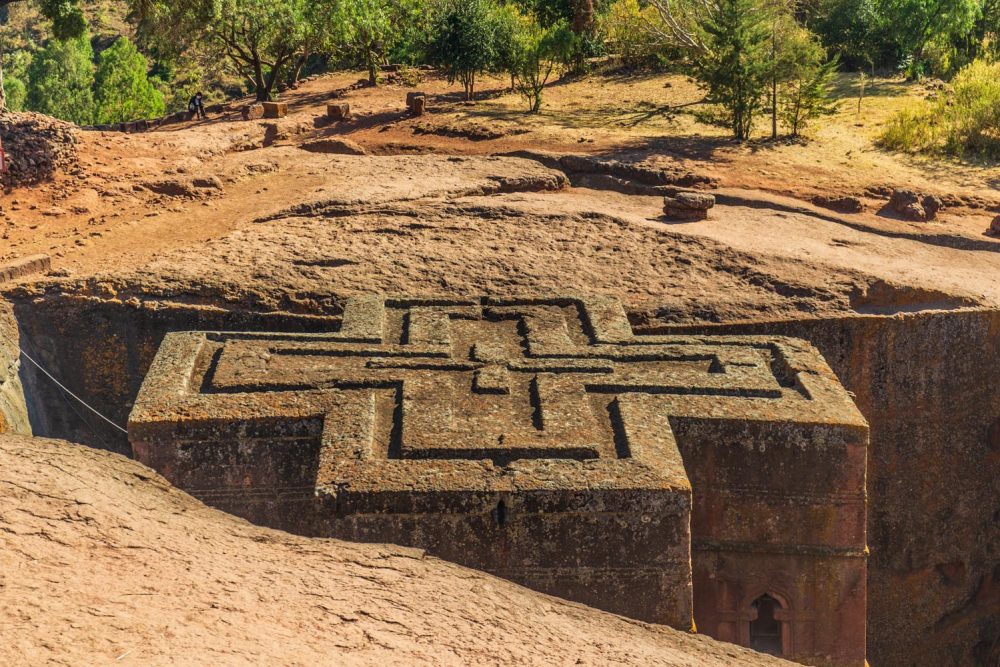 Today we had our first full day of Church-seeing in Lalibela. It‘s a small town of about 30,000 people now with small shops and the usual chaotic traffic and goings-on. Nothing out of the ordinary, other than that it is way off the beaten track and not visible at first glance.

Only reachable by plane or hours of bumpy dirt road it lies in the center of Northern Ethiopia as one of three former capitals. Lalibela was originally known as Roha, but was renamed Lalibela for King Lalibela who resided there for a long time and decided to build a series of amazing churches to honor various saints and the Christian faith. All within 24 years, he built 13 churches.

But not churches built from the ground up, he built them into the rock, downwards by excavating loads of pure rock. In huge excavated areas below ground level, some of the churches are 15 meters high and carved out of a single rock, pillars, doors, windows and all.

There are two main clusters of churches, the Southern and the Northern Cluster and one church that was built last and stands apart a bit. Today we visited that church and the Northern cluster of six churches. Some are covered by a protective roof nowadays, as erosion is taking its toll.

Bet Medane Alem is the world’s largest rock-hewn monolithic church with 11 meters in height and nearly 800 m² in ground area. It has an incredible amount of 36 rock-hewn pillars on the inside and 36 on the outside. Rather impressive on the outside, its main feature inside is a cathedral like feeling stemming from its sheer size and massiveness more so than any ornaments on the inside.

It is rather plain, with only a few holes for burial graves. Bet Medane Alem stands in its own excavated courtyard, the sheer outer walls only pebbled by some more rock graves or hermit‘s coves. A tunnel connects Bet Medane Alem to its neighboring courtyard, encompassing three churches.

Bet Maryam (Virgin Mary’s church) is smaller in size, about ten meters in height and about 260 m² in ground area. It was the first excavated church and is very popular with local folks.

As it happens the day we visited was St.Mary’s day and so the chanting we heard starting at four AM that morning was due to the celebrations in her honor.

One corner of the courtyard was roped off for ceremonial purposes and we saw the priests chanting, singing and dancing.

Inside St. Mary’s church we could see some older paintings, but they were not too well preserved.

On the northern side of the courtyard we visited a very small rock hewn church called Bet Meskel (House of the Cross) which is tiny with its 35 m² inside. While we were alone in it for a while, all of a sudden 50 Italians piled into the church all at once and we fled to the outside fast. A sea of shoes awaited us, as one needs to take of the shoes before entering any of the churches.

Bet Danagel chapel, is even smaller, dedicated to 50 (supposedly murdered) nuns but was not very remarkable. One thing to note in this courtyard is a deep pool of green algae covered water. History or legend has it that infertile women are lowered on a rope into the water and then are supposedly more likely to conceive afterwards. (…remark Esther: already back hundreds of years, why is it always the women‘s fault ???)

The last set of churches on the Northern compound, accessible through a series of trenches hewn into the rock, are combined together. Bet Mikael and Bet Golgotha are fairly small but very atmospheric. One feels transported back in time.

Bet Mikael is a dark church without windows. The only light is coming from the entrance door. It has a dungeon like, dank smell and it does not get better the further you proceed to the back of the church.

In the back wall is the entrance to Bet Golgotha, names after the hill outside Jerusalem. It is only allowed for men to enter this one and it boasts a series of life size reliefs of various saints around the walls.

Last but not least we found a rarely visited chapel on our way out. This one was the most charming and serene of all the holy places we saw this morning.

It is the Selassie chapel with its own little mini courtyard in front. Carved in the 15th century it houses the tomb of King Lalibela. A friendly priest agreed to be photographed and proceeded right to ring the bell for prayer time after telling us that he saw the arc of the covenant as a kid and that it has been found right in this chapel.

Having had our fill of churches for the moment, we decided not to visit the Southern cluster that same day, but to relax a bit in the hotel and only do one more church in the late afternoon due to the nice evening light.

We set out to visit the touristic highlight of all the Lalibela churches only around four PM that afternoon ( it supposedly closes at five PM), right when we ran into the motorcade of our President, Frank Walter Steinmeier, who happens to visit Lalibela at exactly the same time as us. Luckily, he just left when we arrived and we were surprised how little security was. We could walk right by his SUV before he set off and look into the window. The army guards around the car did not stop us in any way to pass.

The most photographed and iconic church of all of Lalibelas churches is Bet Giyorgis (St. George`s church)

It is the youngest of all the 15th century churches and has a completely different shape of all the others, as it is a full monolith and shaped like a cross.

It sits deep into its own courtyard and can only be accessed by a trench from the outside and a tunnel in the wall.

There is no climbing down the 17-meter sheer rock walls that surround the church. As stunning as this iconic church is from the outside, as bare it is on the inside. Still it is very atmospheric inside.

Legend has it that St.George was offended when he heard that none of the churches King Lalibela built was dedicated to him and so he visited with the king and complained.

The king then promised to build him the finest of all churches and so it came to be. It is an awesome sight from above and the outside, thinking that it was hewn out of sheer rock in only six years. According to legend, it the Lalibela churches were all carved by day labour and not slave labour, but who knows… It’s a lot of carving in 24 years…

Despite supposedly closing at five PM, we were allowed to linger on the outside for much longer and profit from a beautiful setting sun and without any tourists on the premises anymore. A local photographer was impressed by Chris’ camera and we decided to let him take a picture of us, that he printed out on the spot.

To round up the day on a lighter note than seven churches, Chris bartered with a TukTuk (in Ethiopia it’s called Bajaj, spoken Badshash) driver to let him drive back to the hotel.

As always, money has persuading powers and so we took the Bajaj and the driver showed Chris how to drive it without crashing.

It was a lot of laughs from all sides until we were home again.