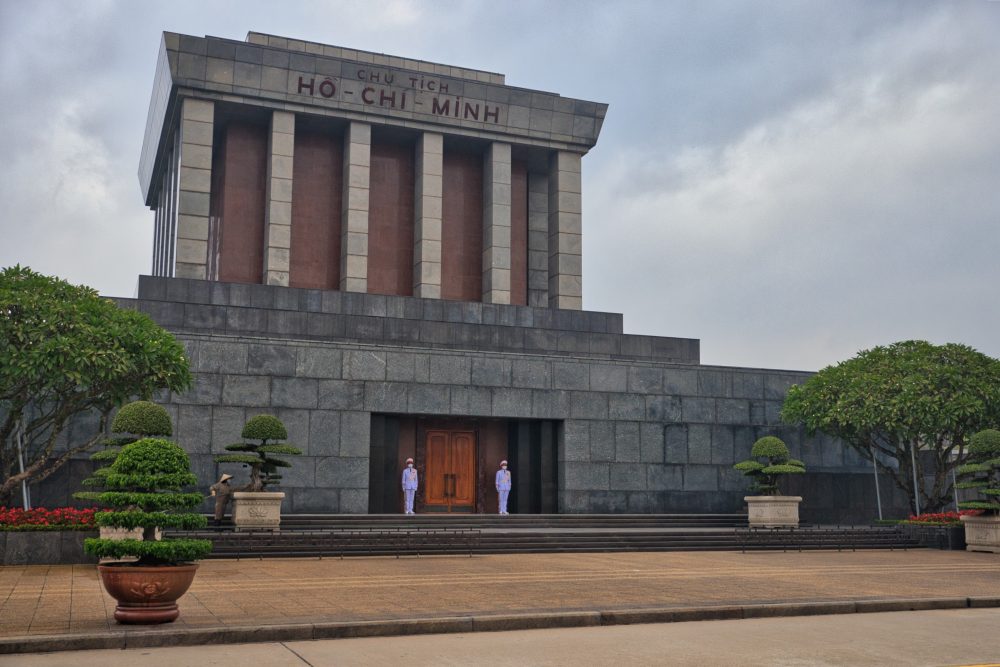 The "temple" of Ho Chi Minh

We woke up fairly early again, as days start with pick up at 8 AM. We are in the middle of down town Hanoi, the capital of Vietnam. Already yesterday on the drive from the Airport, we noticed how different Hanoi is from Saigon. It is also bustling with people, cars and scooters but it somehow has preserved much more of an original atmosphere than Saigon. Maybe because many more of the original French architecture is still intact or because the streets are smaller and everything is closer together. We were in instant agreement that we like this city better.

First we visited the Ho Chi Minh Complex. Ho Chi Minh is the national hero of Vietnam who is being called the father the Socialist Republic of Vietnam, having laid the foundations for both the defeat of the American forces as well as the reunification of Northern and Southern Vietnam. He died before both were accomplished but was credited with the mastermind behind the original plans.

All Vietnamese go on a pilgrimage to see Uncle Ho, as they lovingly call him, at least once during their life time. So we went to see uncle Ho as well. Unfortunately the mausoleum was closed that day, we could only see the outside, not the embalmed body inside. The Vietnamese say that Ho Chi Minh is only sleeping in there, not dead.

Once a year he gets transported for three months to Russia (Moscow) for an embalming update as they have experience with Lenin’s embalmed body there and are fellow communists. We were nevertheless able to see Ho Chi Minh’s house, the impressive presidential palace and botanical gardens that surround the Mausoleum.

By now Esther was craving a real cappuccino, as the hotel and most regular coffee shops here only serve the super strong Vietnamese style coffee. It’s many times stronger than an espresso and even with a lot of milk (they usually served condensed, sweetened milk) it’s hard to stomach. We stopped at a promising coffee place and indeed them made an excellent cappuccino. Esther was happy. Chris tried a local specialty: coffee with egg yolk. It actually tasted quite nice but was as rich as a dessert. Chris loving Tiramisu, said it tasted like one without the Mascarpone, alcohol and lady fingers and that egg yolk and coffee go together well.

Next stop on our Hanoi city tour was the temple of literature. A very impressive compound, consisting of 5 sections from the front entrance and court yard until a very large temple at the last court yard. Each separated by a set of entrance archways. This entire complex is dedicated to Confucius and his four scholars. It used to be the first university in Hanoi, fully dedicated to studying and learning. While we were pleasantly surprised how few tourists were at the Ho Chi Minh Complex, we were a bit put off at the number of tourists at the literature temple. I guess we are spoiled by the absence of people during our covid travels.

Locals tell us that the number of tourists is still far smaller than it was pre covid. Well one could not tell when visiting the temple. Esther decided that we’ll come back in a week in early morning, when we have another night and half day in Hanoi.
It was time for lunch now and we headed into the French quarter for a delicious multi course meal. Food is great here and always super fresh. So far we haven’t experienced anything that did not taste good. But the best was still to come. We are booked on a food tour through Hanoi in the evening. Right after lunch we decided to walk off our full bellies and to roam the crowded streets of Hanoi.

We also (literally) crossed railway street and its railway tracks. The spot has become very famous through the internet, but is kind of closed for tourists now.

There are railway tracks running through a narrow alley between houses barely four feet away from the house fronts. The side walks are barely three feet wide and the train still rumbles through twice a day with up to 50 km/h. But since Instagram & Co made this experience go viral things got so out of control with foreign visitors posing on the tracks that the police closed off walking train street for tourists.

Now you have to have a personal invite from one of the house owners on train street to walk that section. Needless to say that we managed to get invited to one of the houses turned coffee shop in the back. It was a weird feeling to be so close to the tracks, even crossing them twice as there is nothing like anywhere we have been. We enjoyed the special atmosphere here with a yummy passionfruit juice drink and watched the police and the locals chasing ‚invited‘ guest from the tracks. They are keen on keeping their license.

On we went and hopped on a bicycle rickshaw to bring us to the water puppet theater. What a great mistake! Not the theater – but the rickshaw… Instead of the nice small alleys we saw in the French Quarter our driver decided to take only the main roads, crammed full with scooters and cars so it felt like we were breathing in only exhaust fumes while moving at a snails pace. Just as most of the people on the scooters we put on our facemask. Well we’ll certainly not repeat that experience. 45 minutes later we were so glad to arrive at the theater.

We were curious what the water puppet theater was and Chris was a little bit concerned about it being so touristy with up to five performances a day. But then we spent an hour watching an enchanting yet so strange performance. Wooden puppets are being moved from behind a screen in a pool of water telling different stories.

It’s similar to what we know as Kasperletheater and Marionettentheater just with puppets in water placed on a submerged stick. Hanoi has a very long tradition of water puppetry and to watch it was quite extraordinary. I am glad we went even though we did not understand any of the talking or singing and the music accompanying it sounds strange and somewhat lamenting to western ears.
After the theater we freshened up a bit in our hotel and the headed out for a highlight of our stay in Hanoi. Our street food tour. This we’ll cover on our food blog entry.