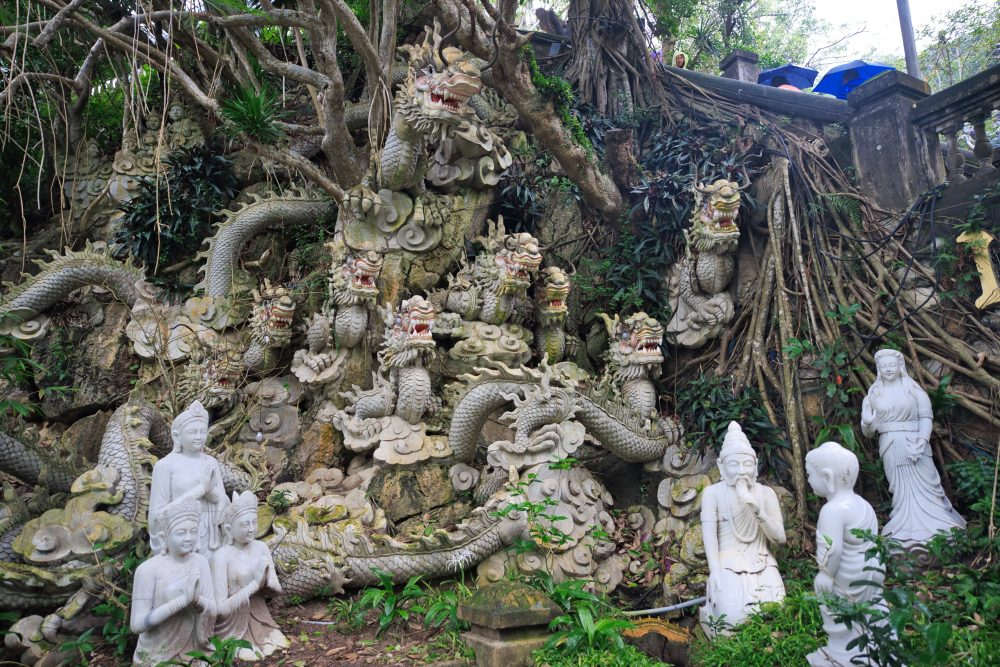 Land of the Dragons

Today is our last day in Vietnam. Tonight we´ll catch a flight to Siem Reap in Cambodia for a three day stop in Angkor Wat before heading back home by way of Bangkok from there.

As our plans is only leaving at 6.30 PM we still have a full day to spend. Unfortunately how else could it be, the weather gods still announced rain…. We’ve never had a vacation with so much wet weather than we had here. Don’t travel to Vietnam in January, unless you like overcast sky and rain. A mere two days of sunshine that was all. Add to that a warm haze in the Mekong and the rest was grey and wet. What a pity as the country itself would have looked so much nicer in the sunshine.

We still had some errands to run in Hội An.

Chris needed to pick up his shoes and belt, Esther needed a last fitting for her dress and pants at the local tailor. Both of which turned out great. Then we had to face the packing challenge. Stuffed to the gills, our suitcases each weighed just above or just under 23 kgs. We have no more room for anything else.

We said good bye to Hoi An, a lovely looking town that sometimes felt too crowded for us with all the tourists and with few interesting landmarks. For the folks who are looking for shopping and party, it’s the town to be.

There was one more attraction we wanted to see in Vietnam that was on the way to the airport. The Marble Mountains.

Originally a quarry for real marble, a whole village close to Da Nang, North of Hoi An, was specialised in marble stonemasonry. Add to that a series of caves and temples, you get quite an interesting place. The marble mountains consists of five large rocks in the outskirts of a Da Nang city, complete with temples and caves.

Nowadays, recognizing the touristic value this respresented, and not wanting to eat away at their attraction, they stopped quarrying the local marble and instead work with imported marble from China. The whole street is lined with stone mason shops that offer figurines and larger scale figures and statues made of marble, jade, and all sorts of other stone in all shapes and sizes.

We had arranged for our airport transfer driver to stop for two hours at marble mountain as it was on the way to the airport. Taking advantage of a small rain break we made our way to to top of the largest rock formation.

You can see the seaside, the city and the inland with the other four rocks from up top. We wandered around the rock, visited five different pagodas and four different caves (all with shrines and buddha statues inside).

Some quite small, others rather large. Some statues looked freshly painted, other really old and weathered.

Here we saw lady buddha statues several times, which we had not seen in any other buddhist country before.

Lady Buddha is the Goddess of Mercy who is believed to see, hear and sympathize cries of people in the world.

Her right hand holds a water vase, containing nectar of life and a willow branch in her left hand, used to sprinkle the nectar on the prayers. She is especially worshipped in Vietnam and equal to the male buddha. Actually the largest buddha statue in Vietnam is a female buddha statue outside of Da Nang.

Some of the caves were rather small and one had to squeeze through narrow passages while others were very large and cavernous.

Some let natural light in and that added to the sense of awe when looking from above to many of the small shrines in the cave.

When we were nearly done with our sight seeing it started to rain heavier again and deciding to cut our visit short we headed back down hundreds of stairs to the parking lot.

Arriving drenched but glad we could still see the marble mointains we hopped into our car and drove to the airport for a last Pho soup and a good bye with mixed feelings.

We decided to write a separate final summary as Esther’s and Chris’ impressions as a sum total of the things seen, eaten and experienced in Vietnam differ slightly.