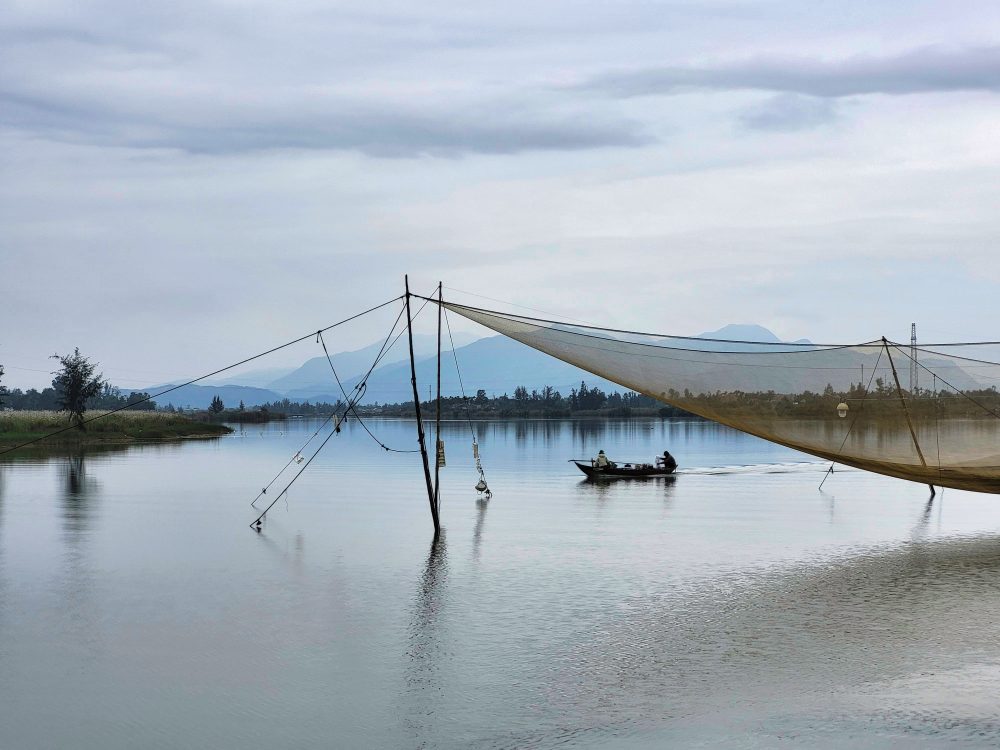 Exploring the suroundings of Hoi An

Today we got up early as we wanted to avoid the crowds from the previous day and see the Japanese bridge without people. Hội An was mainly made of three different groups. The Vietnamese, Chinese and Japanese.

Bult in 1760 it is made from dark wood on brick stilts it has originally linked two parts of the city together – the Japanese part and the Chinese part. Largely inspired by Japanese design, the bridge features two dogs on one side guarding the bridge and two monkeys on the other.

In the middle is a door leading to a small temple where the smell of incense was so intense that we had to leave.
We wandered past the many temples and pagodas early morning but most of them were still shut. The old town is busy with locals setting up shop but tourists are not yet out and about (except us of course…). Back at the hotel we had a healthy breakfast and then Quang, our guide for today met us for a cycling trip across several islands.

Throwing ourselves bravely into the busy traffic we cycled across Hoi An, the old town, and over a bridge into the new town (Party town, called An Hội). as soon as we left a few streets behind us it got really quiet and the real town started to emerge with it’s busy morning activities.

We cycled on small country roads from island to island, connected by small bridges only accessible by scooter or bike. One of the bridges was made of steel bands and rattled like crazy cycling across. Past freshly planted rice paddies and vegeltable fields we cycled to a small village where we had our first stop at a rice noodle factory.

To call it a factory was a total overstatement as only one elderly couple was producing the rice noodles on four steam cookers. They have been doing that for 25 years and are quite famous around here. Chris and Esther both tried their hands at noodle making.

The most complicated thing is to not get it stuck together otherwise it’s impossible to separate it again.

We bought some really good rice crackers to go and on we went on the bike. Looking at some intricate wood carving and inlay workshops to a family that specialised making coconut cake. Coconut cake is a favourite sweet for us, that we discovered in the Mekong delta. Coconut shavings get soaked in sugar cane water, and colored with some fruit coloring (yellow, red or green, or left white). It is then cooked in a wok and then finally coated in more sugar. Yum! A real coconut treat! We would call those coconut bands, they call it coconut cake and it is only cooked for TET, their Vietnamese luna new year festival that is happening on January 21. this year.

So every familiy is getting ready for it. All the businesses are in high demand from the lady that sells fresh sand for the incense stick holders to the many lantern shops and card makers. It’s the biggest family festival of the year and the whole country takes at least three days off with all shops closed. It’s time for family and friends and not tourists. We bought some coconut cake as well to bring home and continued to cycle to a little boat that was supposed to ferry us back to the mainland, bikes and all for our kayak excursion and then lunch.

So far the weather goods have been at least OK as we had no rain so far. The ferry dropped us at the kayak place and we got into our two seater and started paddling through some canals close to the big river.

We colorful king fishers, white egrets, little crabs as we paddled through the forest of water coconut palms. It was a very peaceful half hour before it started raining again and we slowly headed back against the wind and arrived wet at the boating place. Well it would have been too nice without the rain….

After some biking we arrived at our lunch place and were glad to sit down and enjoy a delicious meal with local delicacies. As always we told ourselves we’ll go on a diet when we come home as we have eaten so many good things here that each of us put on a few pounds for sure!

Cycling back to Hội An in the rain was not much fun and so we cut the day shorter than intended. We preferred to kick back with a good cappucino at a french café around the corner.

At six PM Chris was scheduled for a fitting for his shoes and after that we had a delicious dinner at a small vegetarian restaurant trying out blue tea. Yes it’s a blue flower that’s called butterfly flower and the tea is called butterfly tea.

Once you pour water in it it turns blue, if you add lime (acid), it turns purple. Quite a strange sight.
We called it an early night as we had lots to pack for the next day and both were already on our check in limit of 23 kg for our luggage for the flight to Cambodia…