Tsechu in the remote village of Shongpu 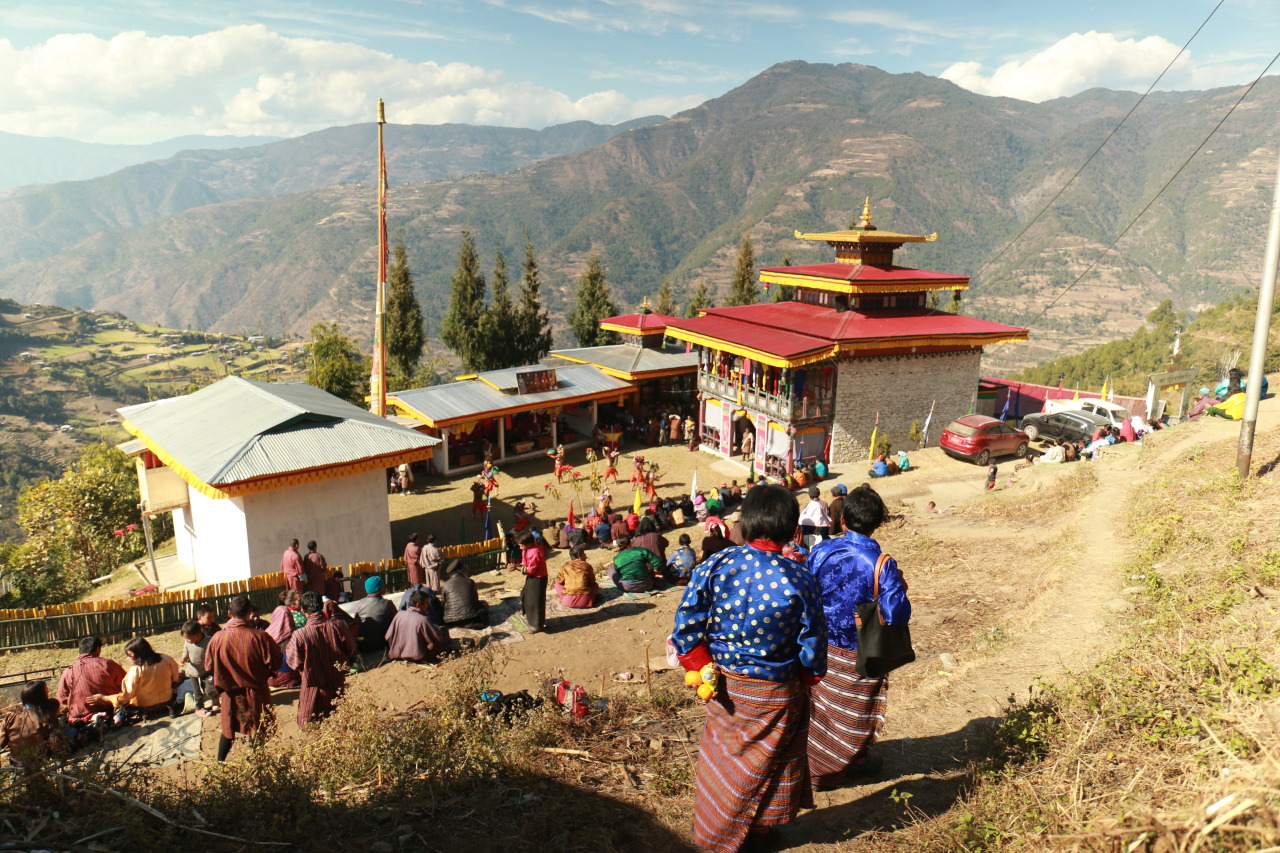 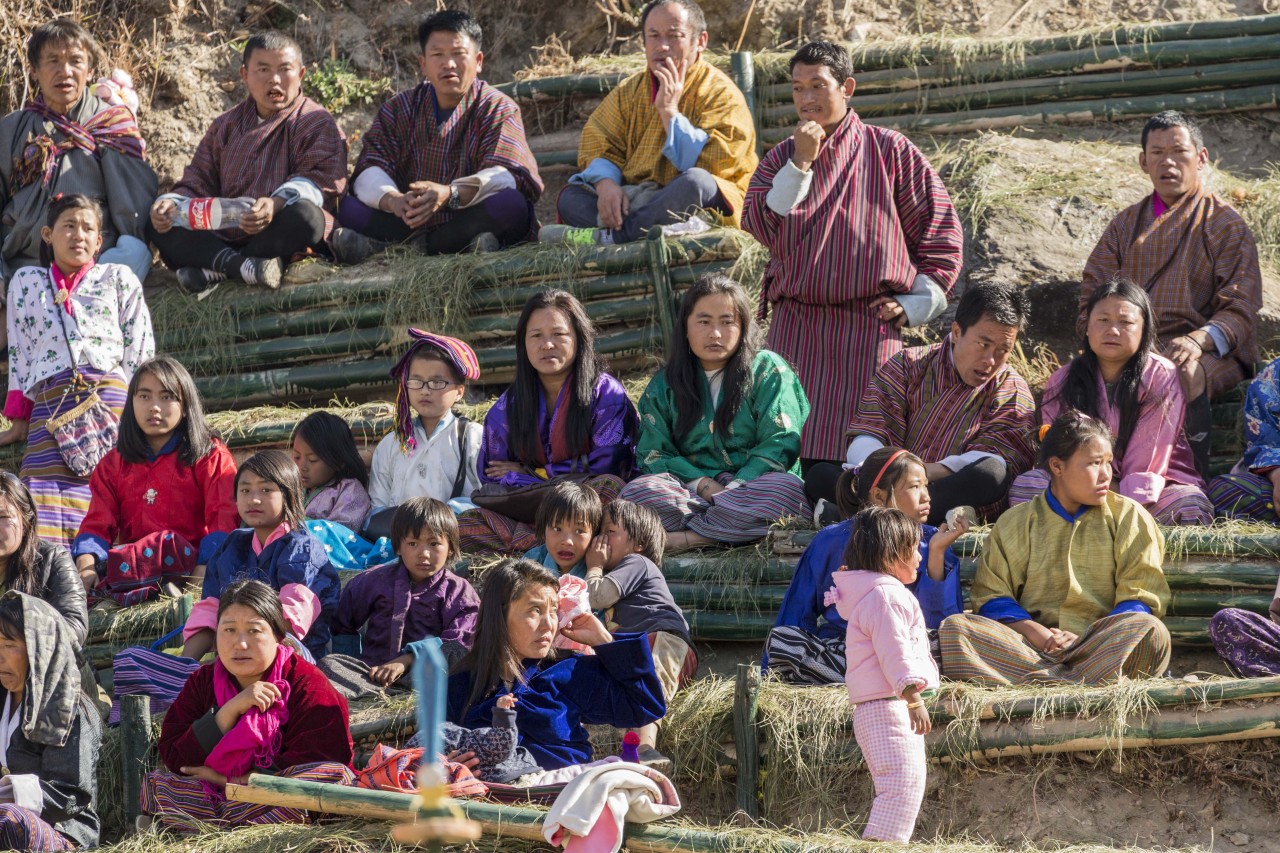 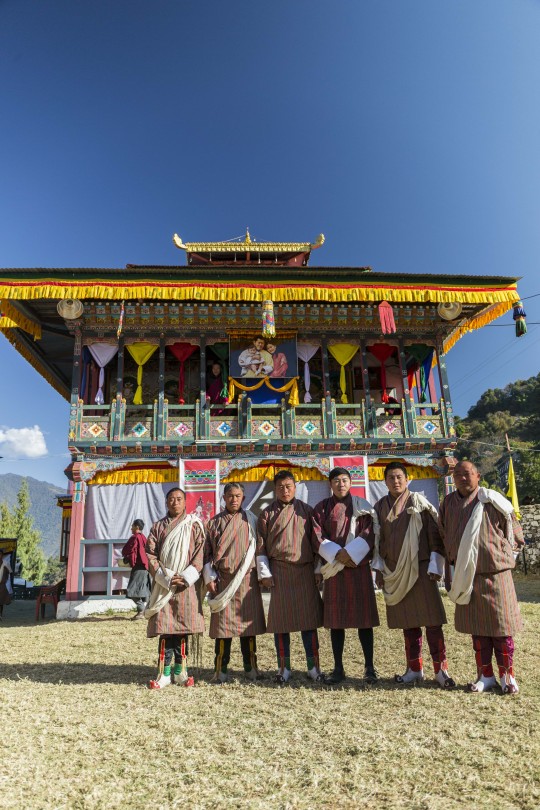 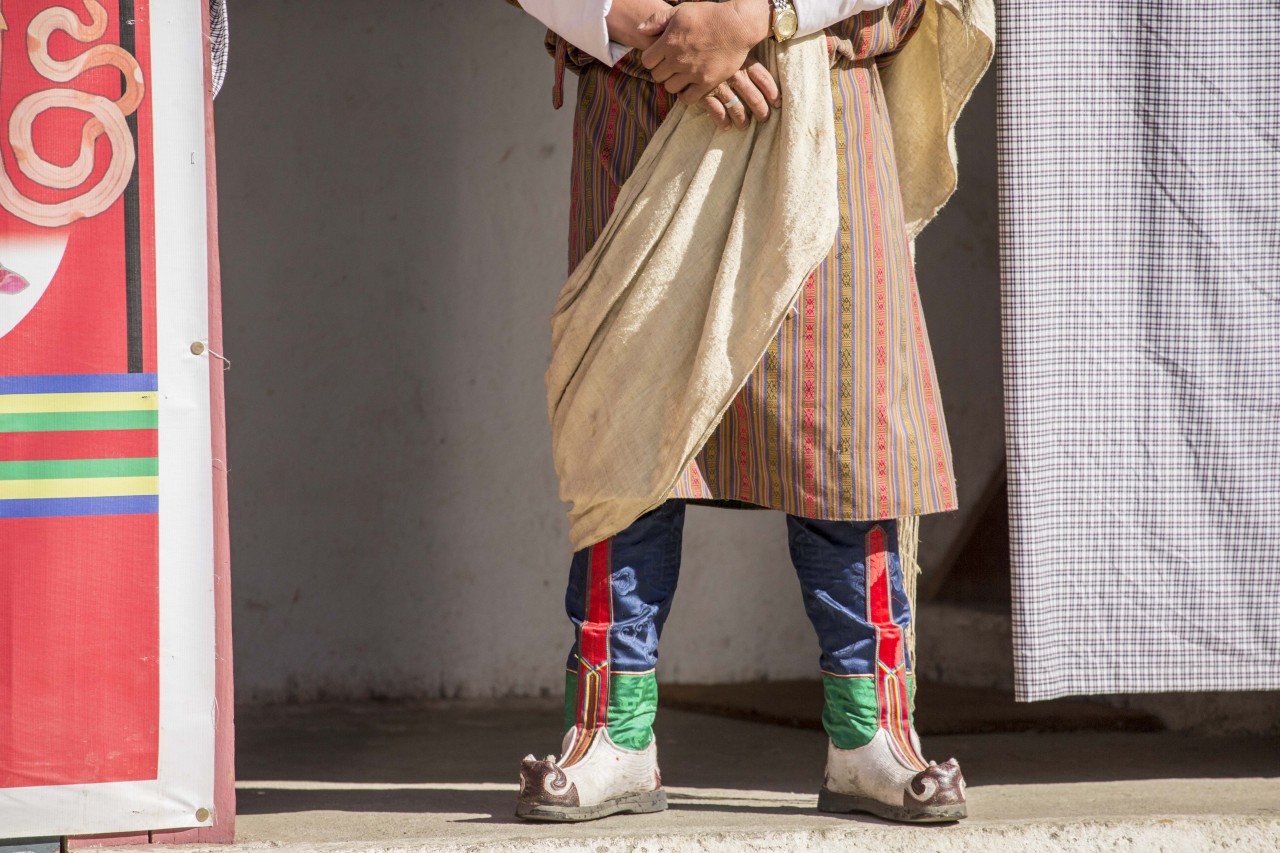 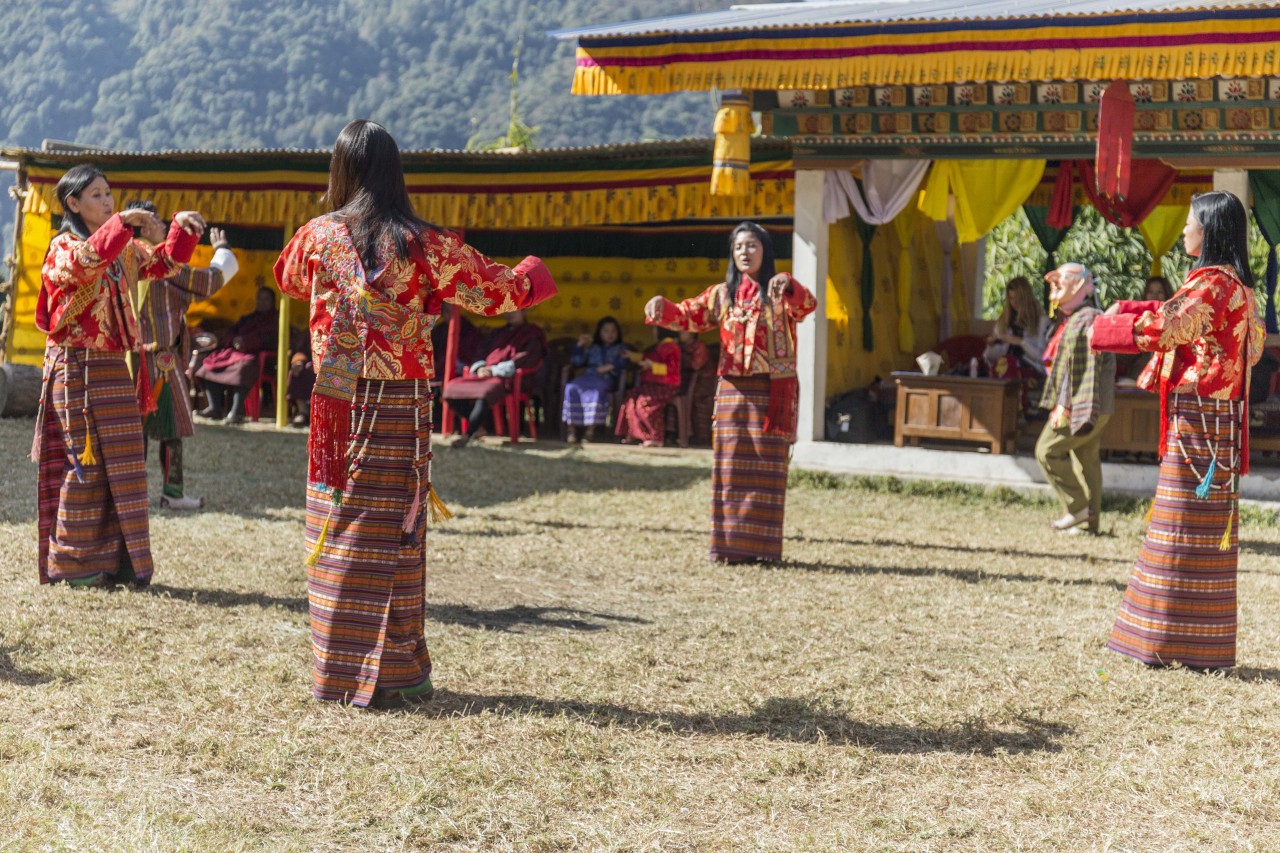 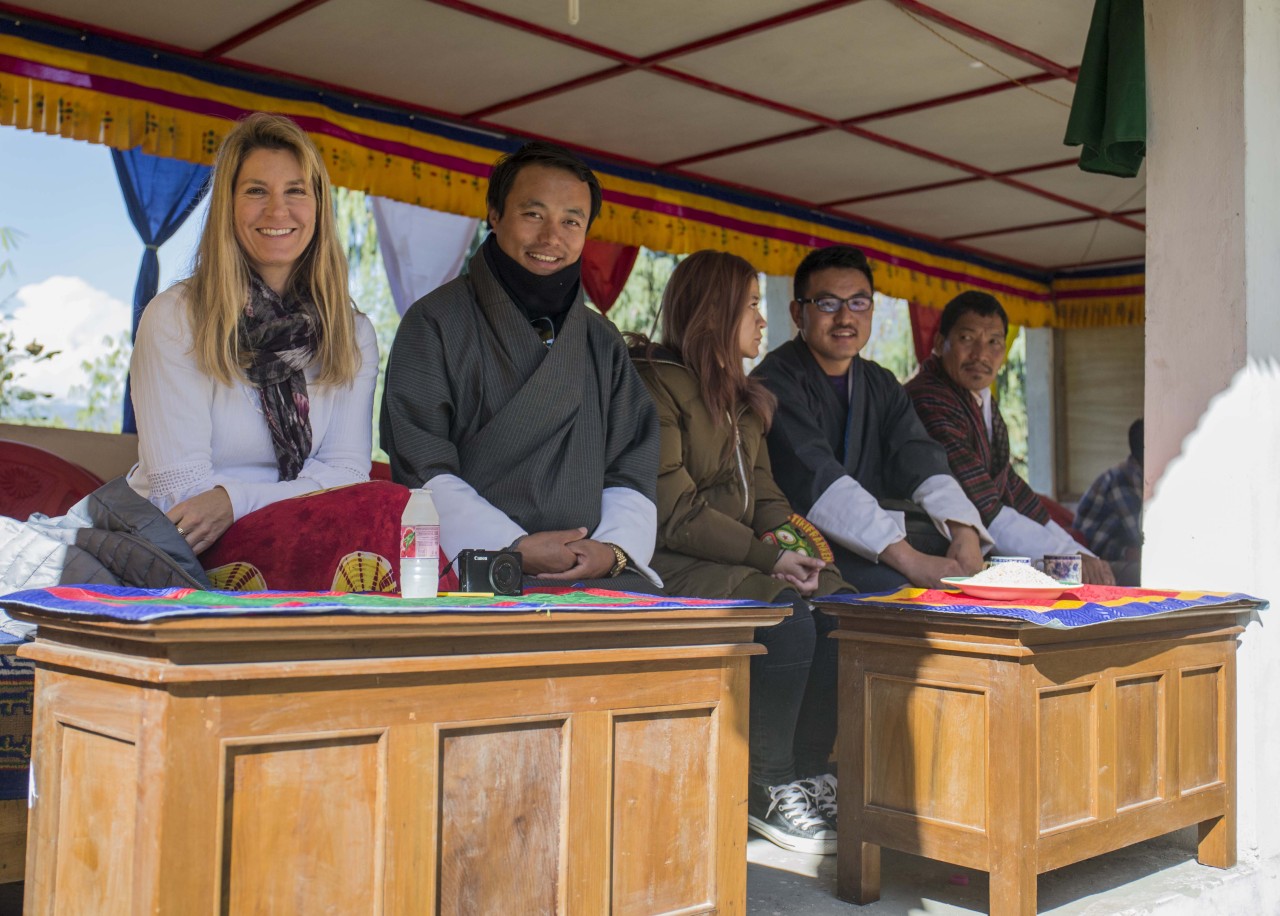 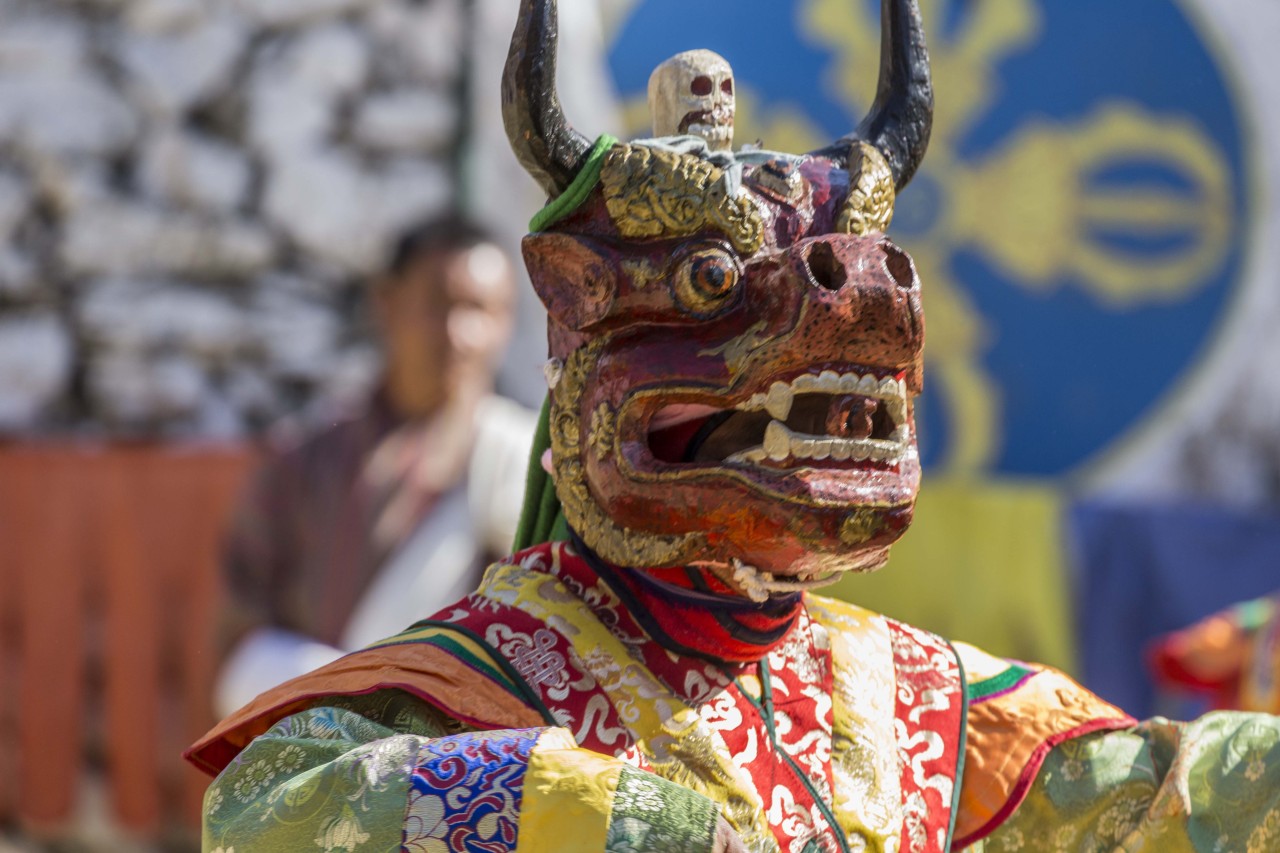 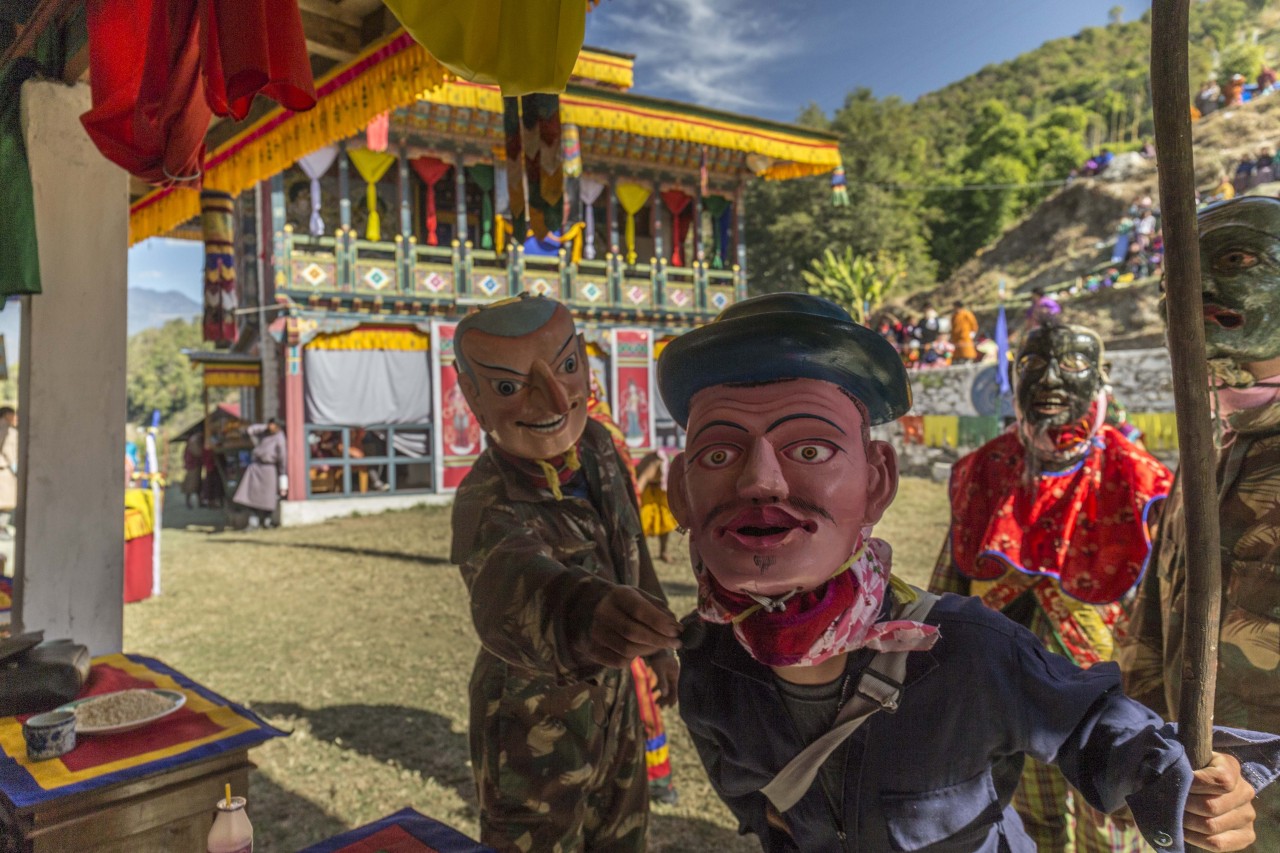 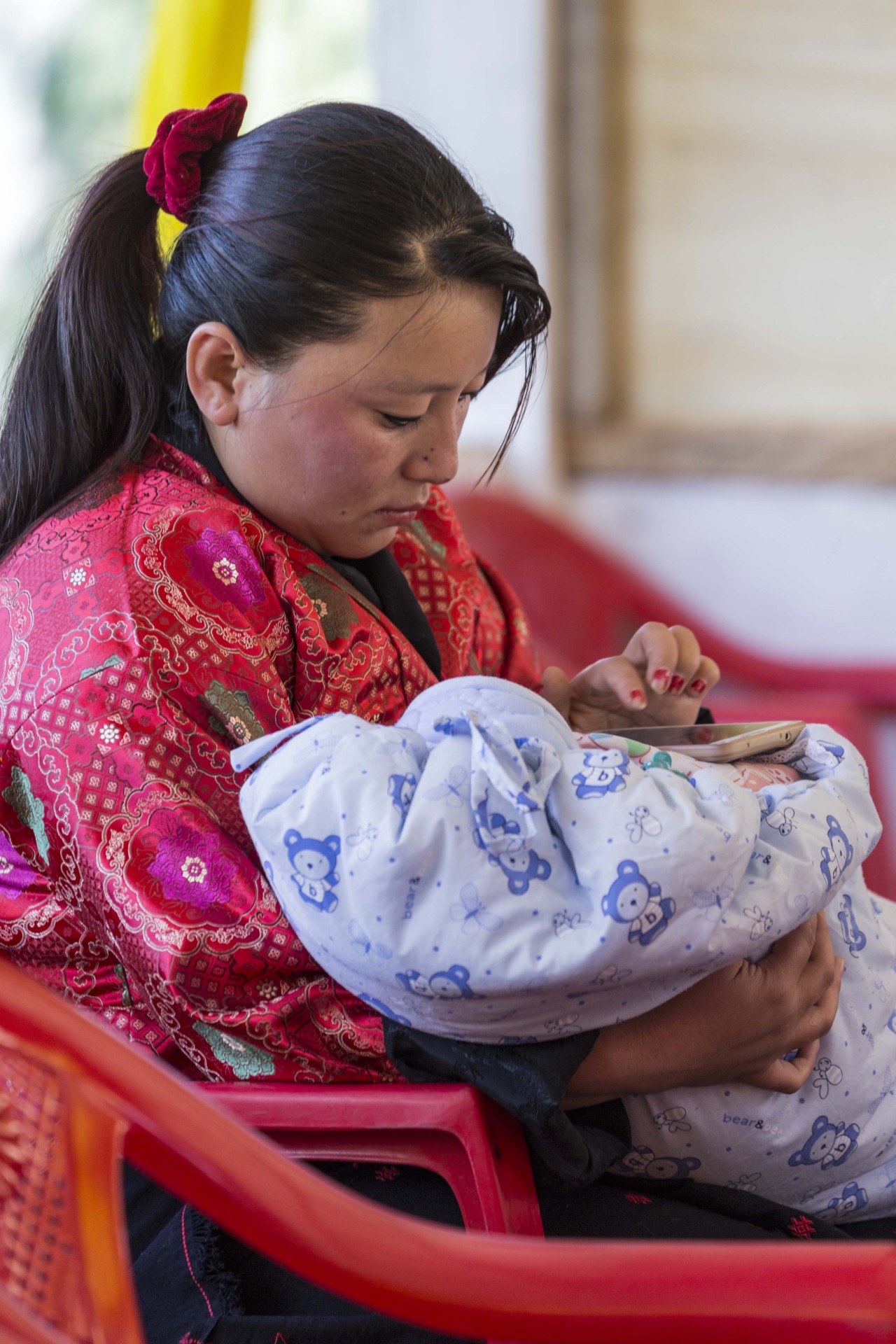 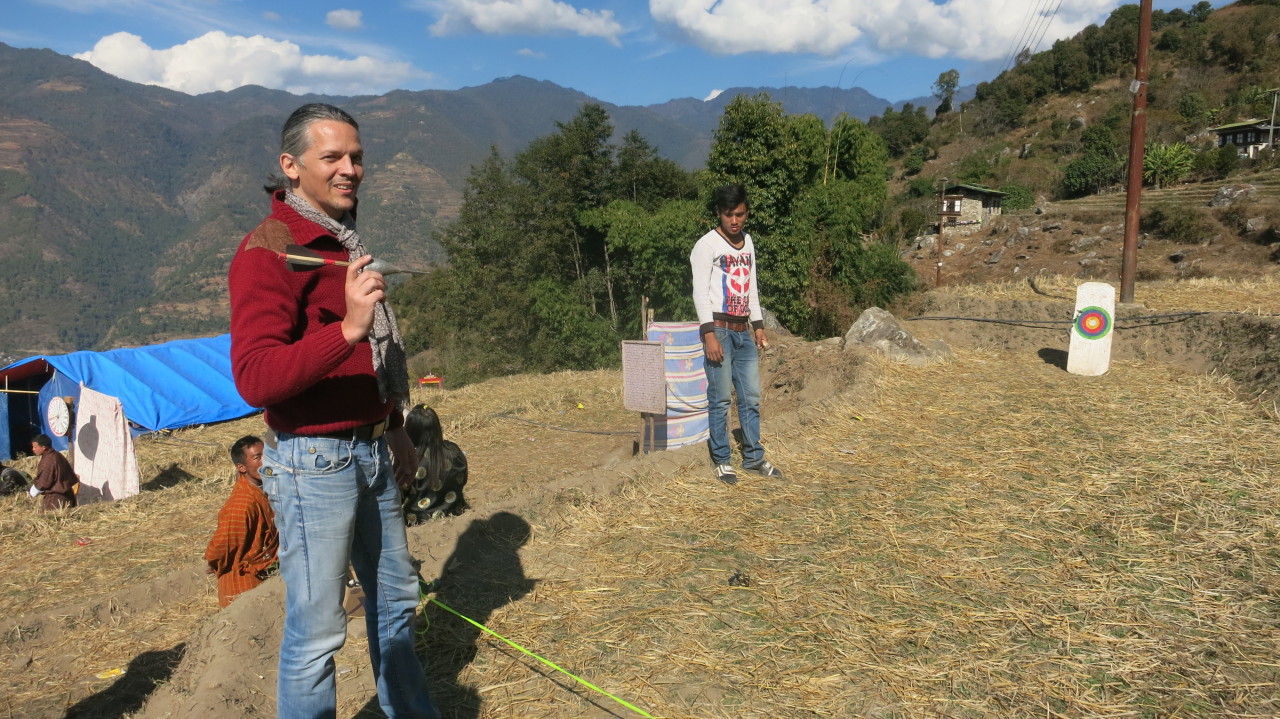 Today was a very special treat for us. One of the things Bhutan is most famous for are their Tsechus. Tsechus are festivals that last for three days starting with a blessing from the highest ranking monk of the region as well as a group of his subordinate monks. Followed by original dances and other festivities.

Normally most Tsechus are happening between March and November and while in December and January the skies are a clear blue and the sun is shining every day, we did not have any Tsechus on our tourist menu – until our guide Norbu called one of his friends and asked around. As luck would have it, a small village way in the east of Bhutan called Shongpu was having a three day festival during our stay in Trashigang. We rearranged our schedule to be there for the third and final day of the festival. And what an interesting and amazing experience it was.

We set out early that day towards Ranjun, a very picturesque village on the Gamri Chhu river. The drive was pleasant, no road works and sunny skies. After we passed Ranjun, we took a hairpin turn onto a dirt road with no sign whatsoever. Impossible to find Shongpu without guide and driver. It took us a good 40 minutes on a very bumpy dirt road until we finally passed the village gate. Tsechus start when they start. And that can vary by day, arrival of certain important people, etc. We arrived around 10 am, the time the festival was supposed to start. Far from it. Everyone started to arrive slowly, the monks and some of the villagers gathered in front of the village temple and made their way into the temple for the ceremonial blessing before the Tsechu could start. We were invited to attend the blessing ceremony. Leaving our shoes outside we tip toed after our guide Norbu who threw himself onto the wooden floor three times in front of the altar first and then in front of the high monk. Perplexed we stood there, no knowing if the same was required of us.

It turned out – no it was not. We were motioned to some cushions and the locals offered their gifts to the monks and us. We were handed a pack of instant noodles, Chupa Chups lollipops, sugarcane, cookies and lychee drinks in plastic bottles. While we just sat there, the subordinate monks were chanting and playing music and performed rituals entirely foreign to us. Chris will post some pictures of the elements used from a later day since inside the temple no photographs are allowed. After what seemed like a half hour of ceremonial blessing and various donations, we made ours and went outside again. The ceremony lasted another 30 minutes, but it seems that Buddhist ceremonies are fairly flexible in people coming and going during those.

Outside again, we were shown to a place of honor under a covered veranda. First row seats! Luckily Norbu explained the details and proceedings as he had done inside the temple. Everyone in Bhutan that is attending a festival or paying an official visit is required by law to wear the traditional dress called a Gho for men and a Kira for women. It is a three piece garment made of woven cloth that is draped and wrapped around in a certain sophisticated way. Gho’s look like a kilt with a top and a kangaroo pouch in front as well as a shawl for official visits. Often hand made traditional shoes are work with the dress. The coloring of the shoe tops even has a meaning: green is for regular people, blue is for officials, red for monks and only the king is allowed to wear yellow. Kira’s are long skirts, a blouse/jacket mix and a shawl as well. Often they are very colorful and pretty to look at. Mind you, Chris in a Gho would definitively look funny while Esther would look amazing in a Kira!

The Tsechu finally gets going around 11 am, the makeshift bleachers are filled up with locals, The veranda with VIP’s – us ;o)). A woman behind us holds her baby while checking facebook on her mobile phone.

The 21st century doesn’t stop at Bhutans borders anymore since the king allowed the internet in the year 2000. One third of the 750.000 inhabitants has now access to the global web.

An announcer calls attention to the program. A hired band starts the Tsechu with some folk songs and jokesters start warming up the crowd. Jokesters are a sort of clown with masks and they are allowed to poke fun at anyone – Themselves, spectators, dancers and even the monks – and foreigners of course. The program varies between musical songs, traditional dances by the hired dance group as well as monk’s dances in their colorful masks.

After being offered the traditional butter tea (black tea with butter and sugar) and fried rice as snack (felt like popcorn in a cinema), we watched the show unfold. Chris was allowed to film at his heart’s delight and was running around with various cameras the whole time. Once he even got pulled into the show by a jokester, so he tried to hoppel dance his way out, to the delight of the entire audience! It was pretty amazing but after having seen and listened for about two hrs, we got hungry and left our seats. Needless to say the jokesters followed us out of the town square for all to see and noisily asked us questions we could not understand. Norbu translated that we were invited to lunch with the villagers, and with a side remark in English he made it clear that he thought that village food will make us sick with our delicate stomachs… It was quite hilarious.

Around the festival small stalls selling little toys and clothes were set up. Anyone coming here has plenty to see and experience. We tried a little bit of darts and kept the crowd laughing as we rarely hit the board.

Soon we had to leave again, but this day will stay in our memories forever.