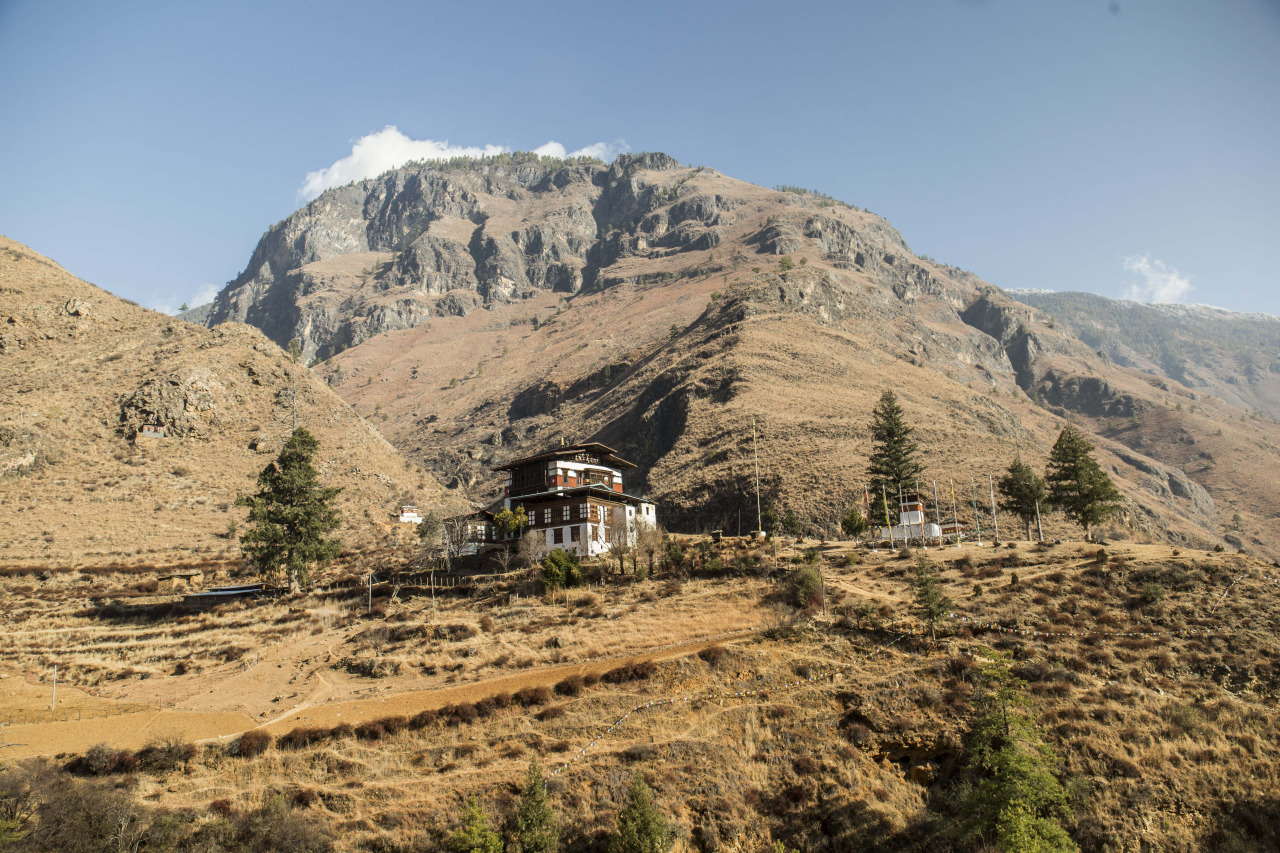 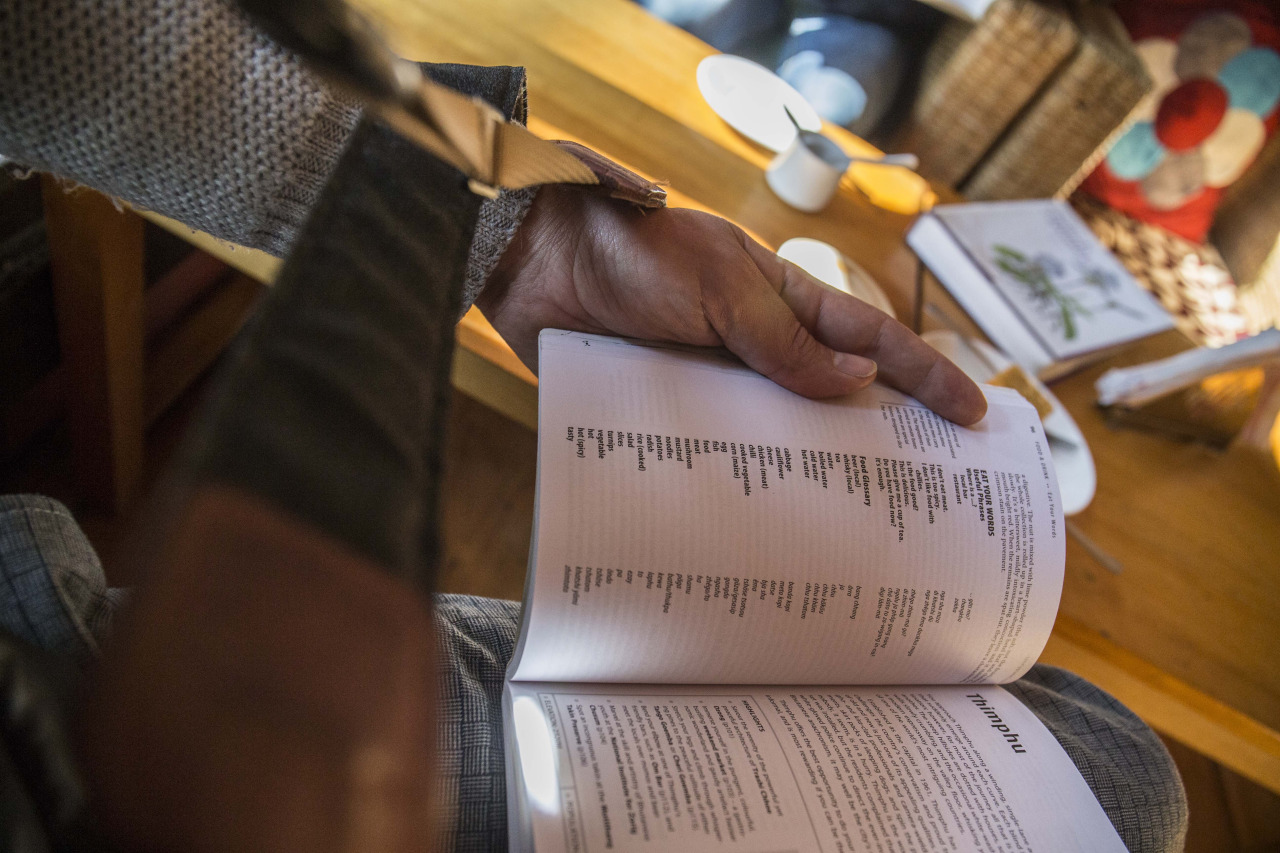 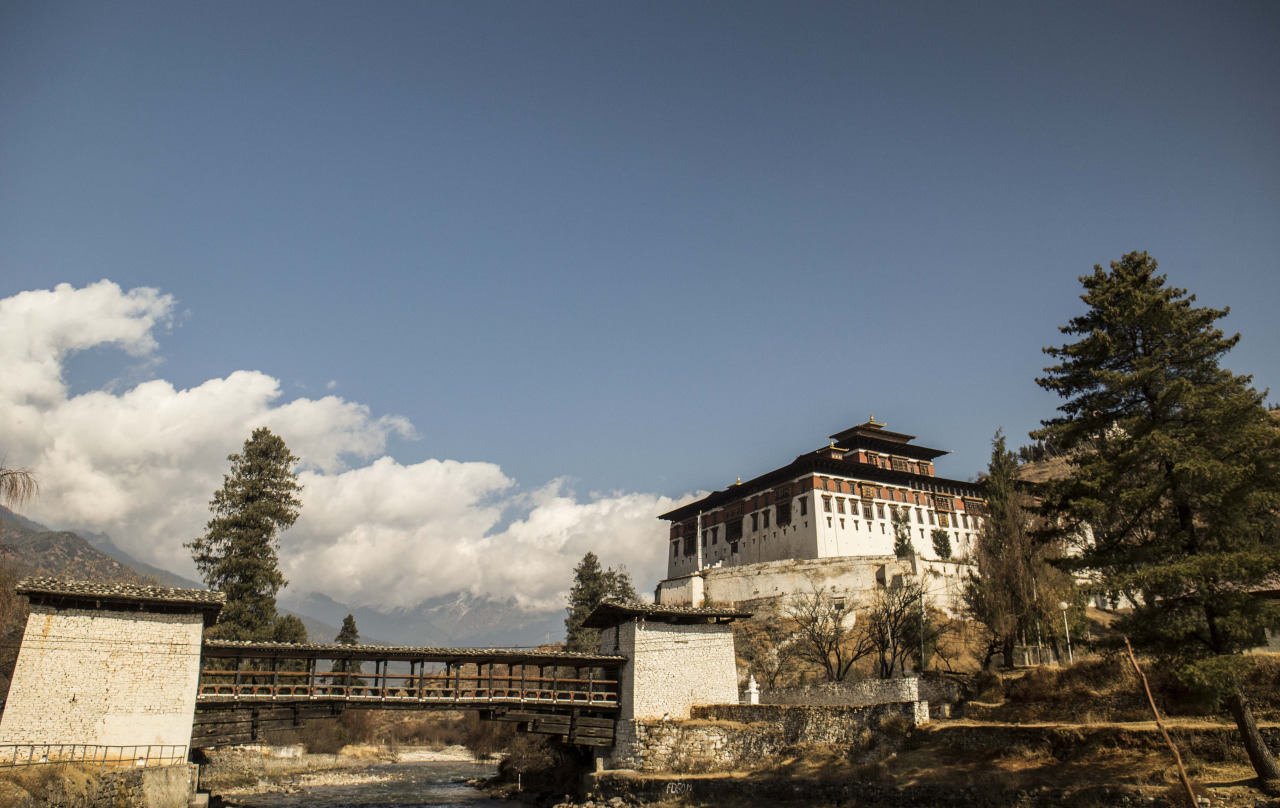 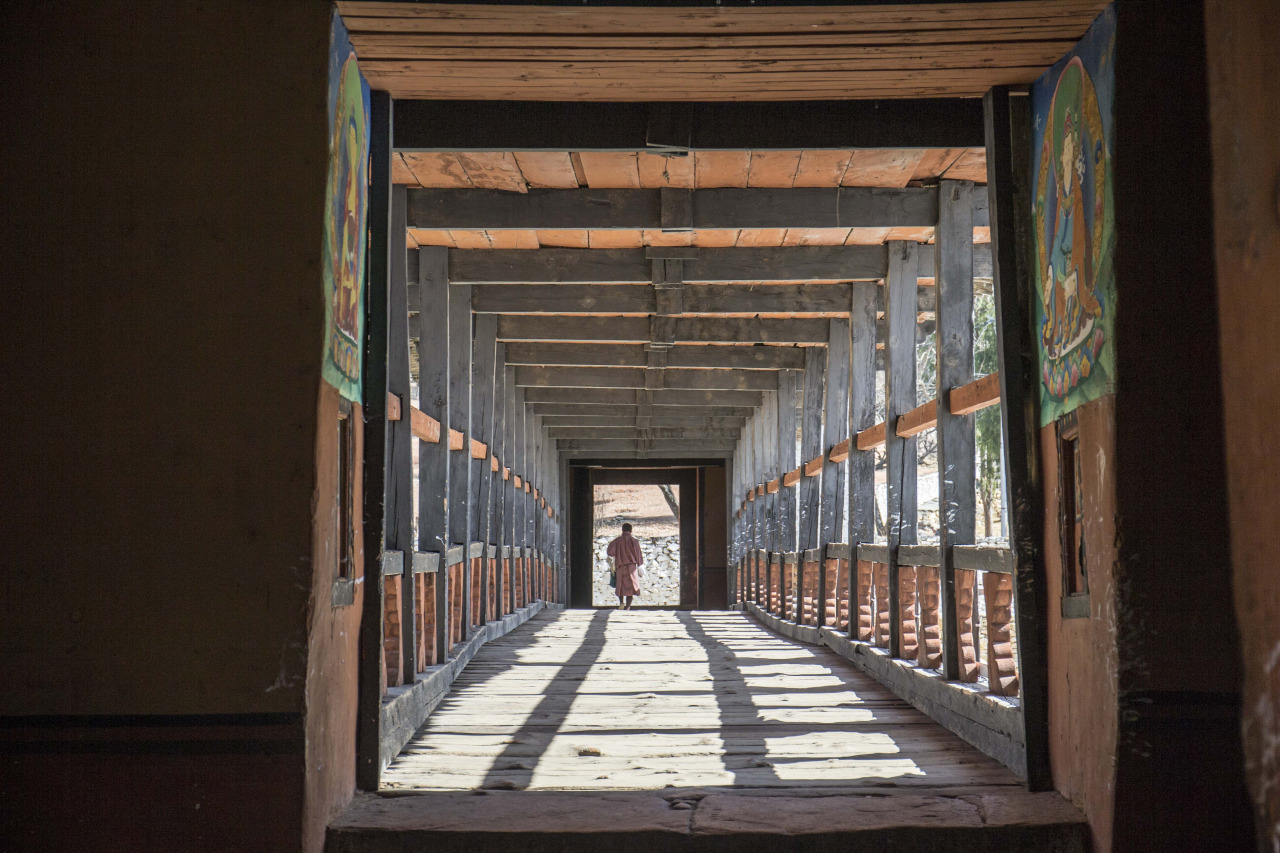 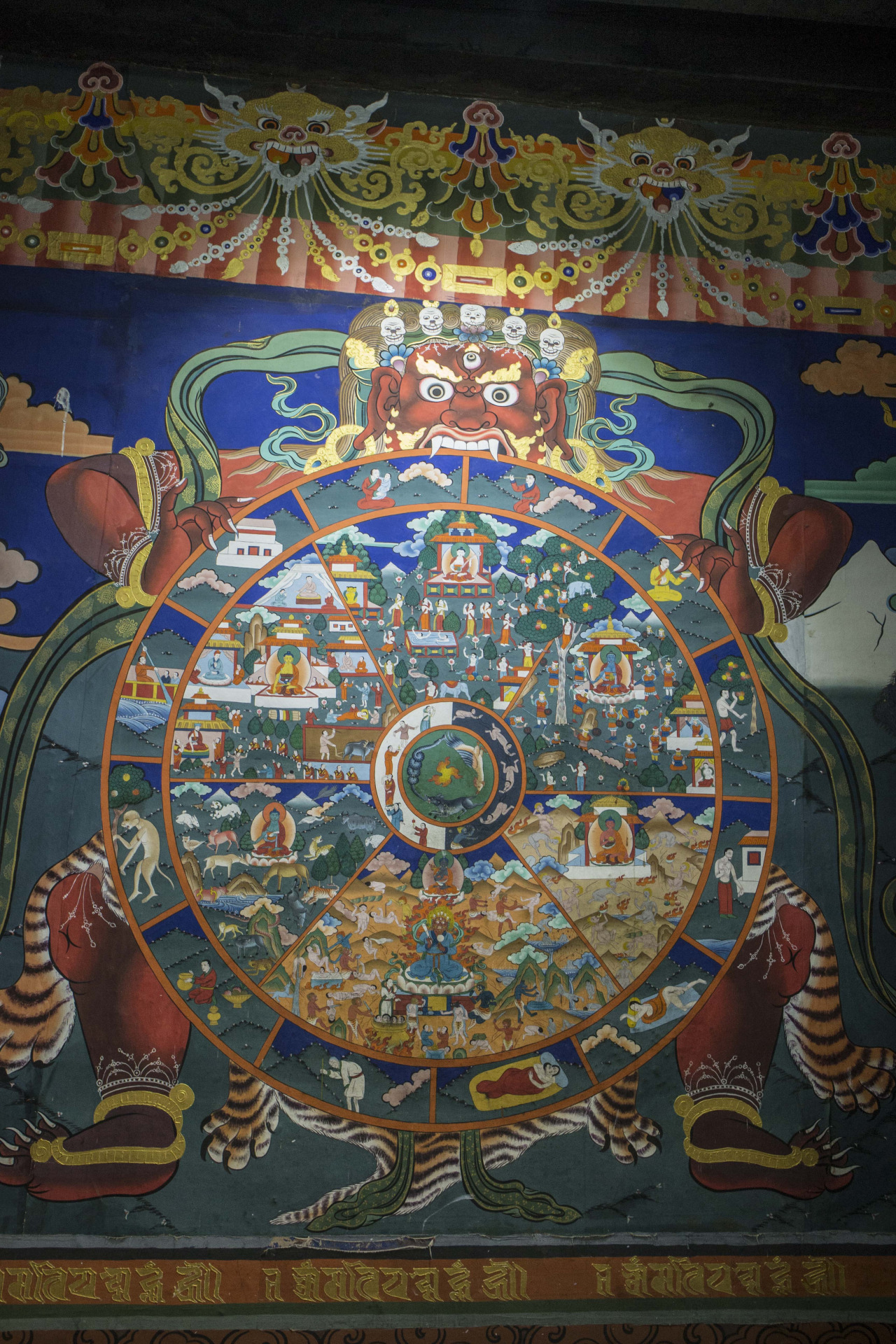 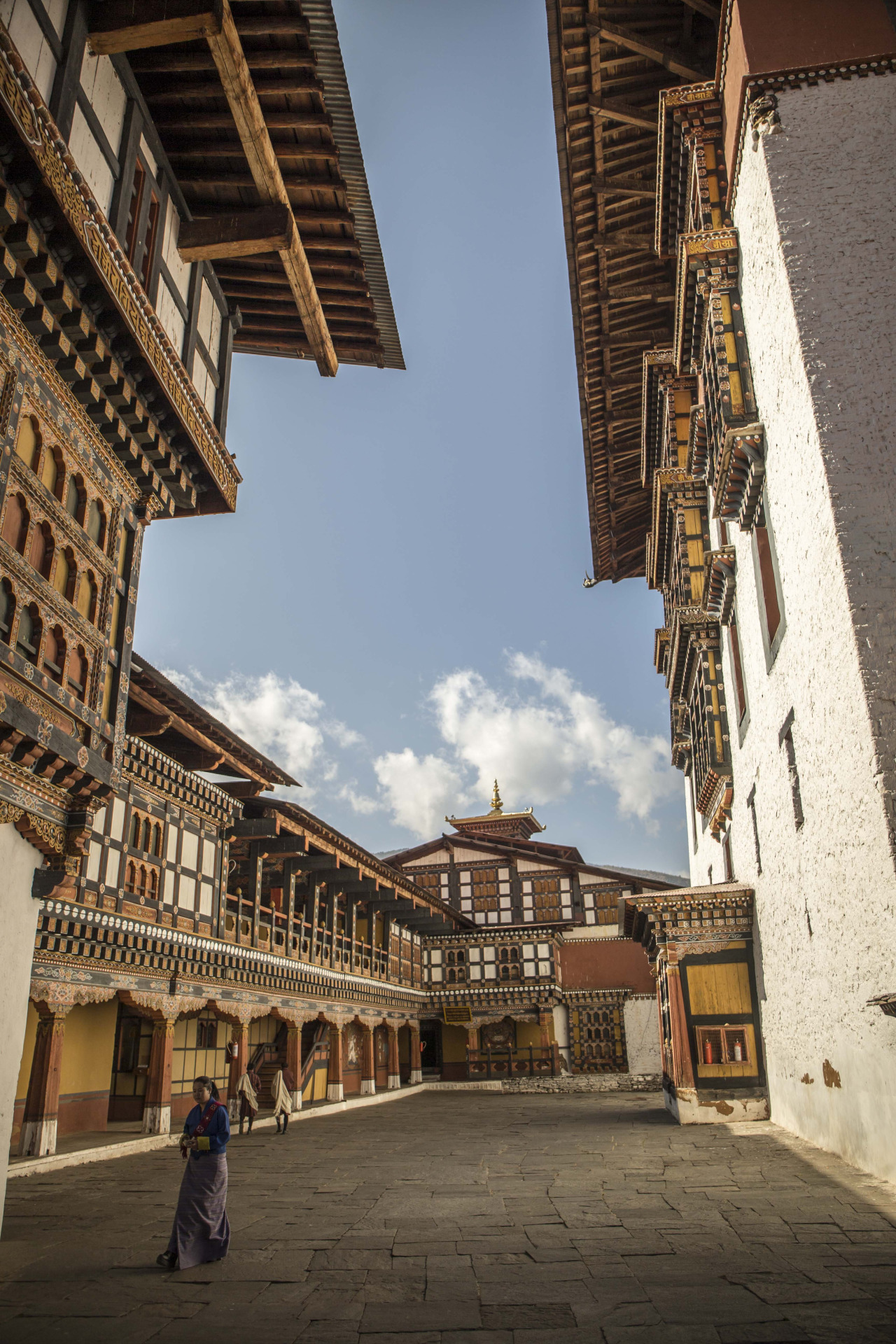 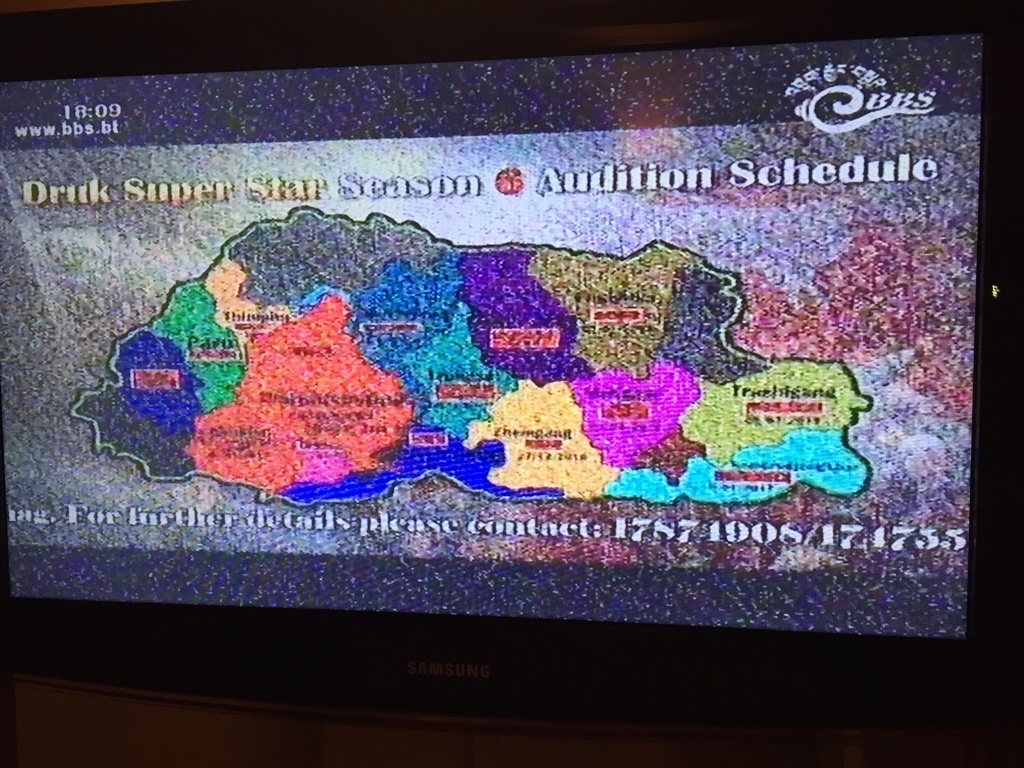 Today we said good bye to Thimpu. We won’t be missing the dog barks or the industrial side of Thimphu, nevertheless it was a city full of life and laughter.

On the drive to Paro, we drove through some really stunning country side. Steep valleys with small little rivers on the bottom meandering slowly. The sun was out and shining on many golden roof of smaller temples.

One of them is a very idyllic monastery on the opposite river banks and could only be reached by foot over a small bridge. The Tamchhog Lhakhng is 600 years old and privately owned. We did not know that temples could be privately owned by now. An old Tibetan family keeps this temple in fairly good condition.

On we drove to Paro, our last destination in Bhutan. Paro valley is home to Bhutan’s highest mountain. Mount Jhomolhari is 7,314 meters high and as Bhutan does not grant a permit to climb their highest peaks, it is a mountain that has only been climbed a hand full of times with special permits. Bhutanese think their mountains as sacred and do not issue climbing permits outside the well-known trekking routes.

Paro is the only international airport of Bhutan (with about six flights out a day) it is also the prettiest town we have seen in Bhutan. All the houses are kept in the same low two storey architecture and are enriched with the typical woodwork and paintings. We much preferred the quiet Paro to the buzzling Thimphu.

On the main street one souvenir shop was next to another, but even if you browse casually the Bhutanese do not try to make you buy anything. Very pleasant not to be pushed into buying something at every shop you enter.

Paro has two main attractions which make it a must see for every visitor. One is the Paro Dzong and the other is the Taktsang Monastery.

How to get to nirvana?

We first visited the Ringpung Dzong, truly a beautiful Dzong, maybe second only to Punakha. It was built in 1644 not only as a monastery but also as a fortress to defend against the Tibetan invaders. It was said to have had the most powerful armoury of the country. Its walls are several meters thick and it literally towers over the city high above the river. The unusual thing about this Dzong is that it’s two courtyards have a six meter height difference. As it was built on a steep slope, the administrative part of the building is higher than the monastic body. The Paro tsechu is one of the most watched tsechu’s of Bhutan. We wandered around and peeked into its many temples. Each Dzong or monastery has certain depictions and murals that are always present, but never look exactly alike. One is the wheel of life, another are the four kings (one for South, North, East and West) and another is the four friends (written about in a former post). In Buddhism you are really encouraged to lead a good and honest life and to overcome the three main poisons to achieving Buddhahood (= the nirvana = the heaven) the three being greed, hatred and ignorance. Those are always depicted as a snake, a bird and a pig in the center of every wheel of life. It is believed that those three are the root cause of all other evil.

After visiting the Paro Dzong we then went on a small hike to see one of the oldest temples of Bhutan. Albeit very small we sensed it had a special aura to it and lots of history. Kyichu Lhakhang dates back to the 7th century and consists of the old and a newer part. The old part has jewels in front of the altar inlaid in the old floor boards and from all the worshipping it has two clearly visible and feelable imprints of the front of little feet. The Bhutanese, when entering a temple falls down to his knees first and his forehead touches the floor. This gets repeated three times to the seat of the Rinpoche (high priest) and then opposite in direction of the altar / Buddha statue again.

Hence it is absolutely credible that those two imprints the exact shape of small feet were caused by millions of Bhutanese paying their respect to their saints. Chris could not resist to put his feet in as well and confirmed that it felt as if they belonged on that exact spot. After making our donation, as we did everywhere, we wandered around the premises, repeating the mantras, turning prayer wheels and marvelling at the old structure that lasted centuries.

Many of the old buildings have been victims of either floods, earthquakes or fire at some point in time but this one seemed to have survived all troubles.

After a pleasant afternoon, we headed to our hotel for some early packing and relaxing, as we only had one day left. Tomorrow was our big hiking day up to Taktsang Monastery which was supposed to take a full day. Switching on the television for the first time in weeks (successfully we had ignored the news from the western world for weeks now) we switched to Bhutan television as Chris wanted to practise his understanding of Dzongkha. Dzongkha is the official language of Bhutan and the one that unifies all districts (kind of ‘hochdeutsch’ for Bhutanese) besides Dzongkha there are 23 other  languages existing in Bhutan, amazing as the country is about as big as Switzerland and only has a total of 750,000 people.

Chris inevitably smiles at Bhutan television (BBS) and is convinced they could use a few of his skills there. So while watching a local program what do we see as a preview? Druk Superstar Auditions throughout the country! Amazing how Coca Cola and Reality TV shows are taking hold here too!