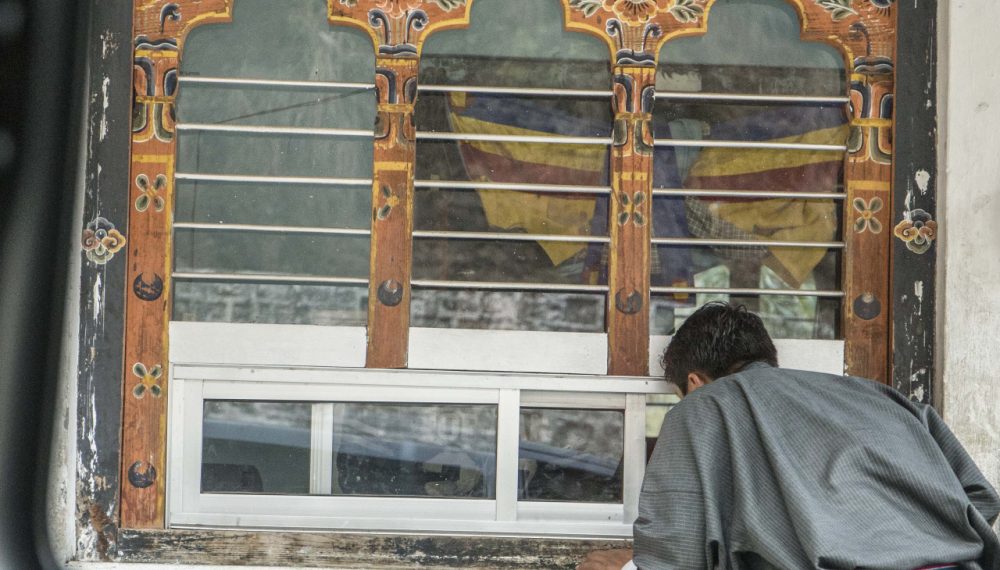 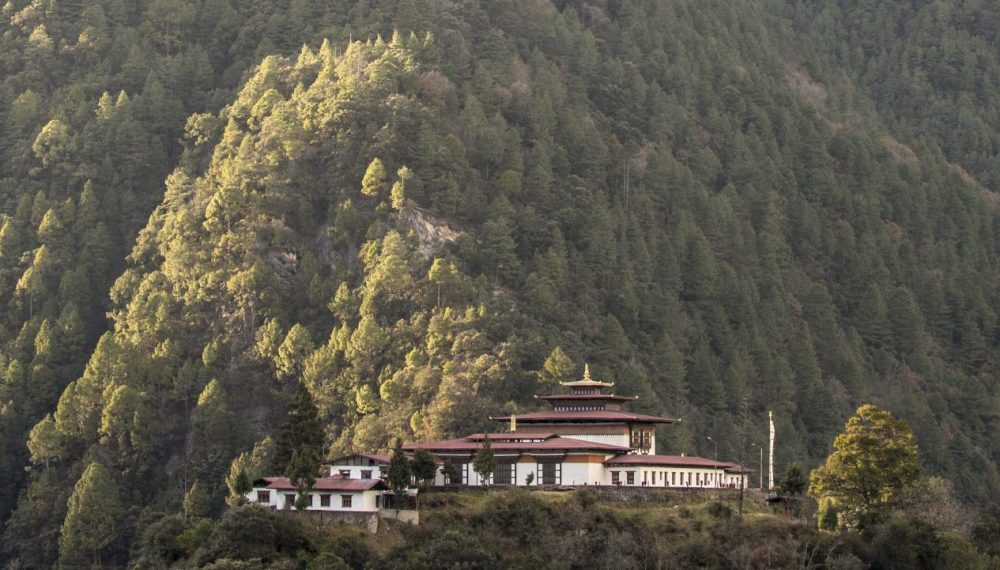 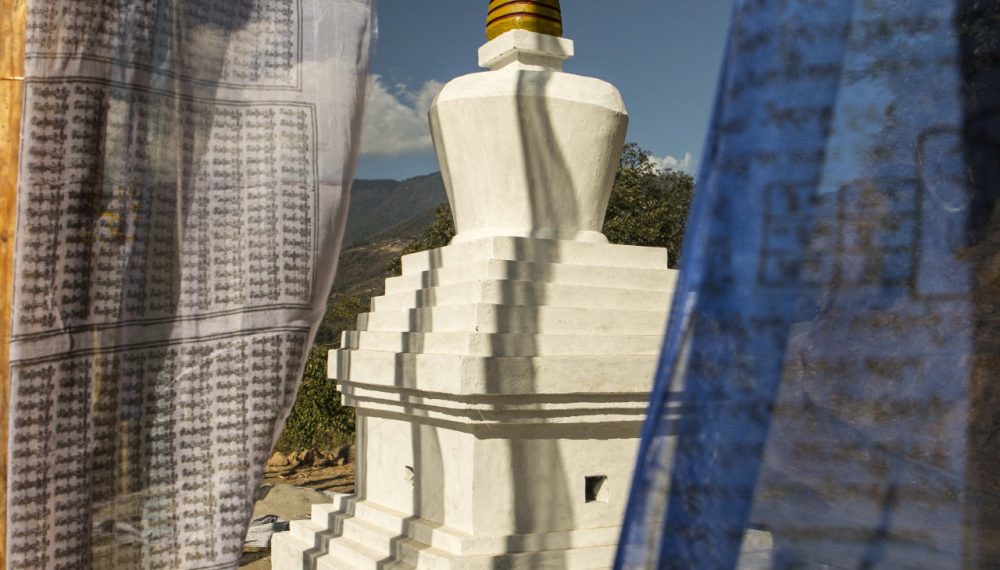 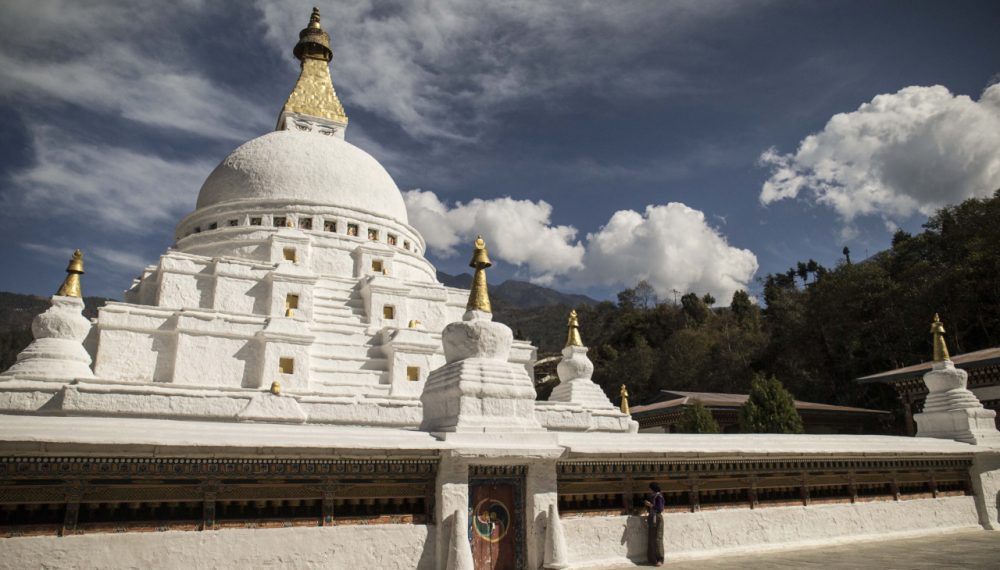 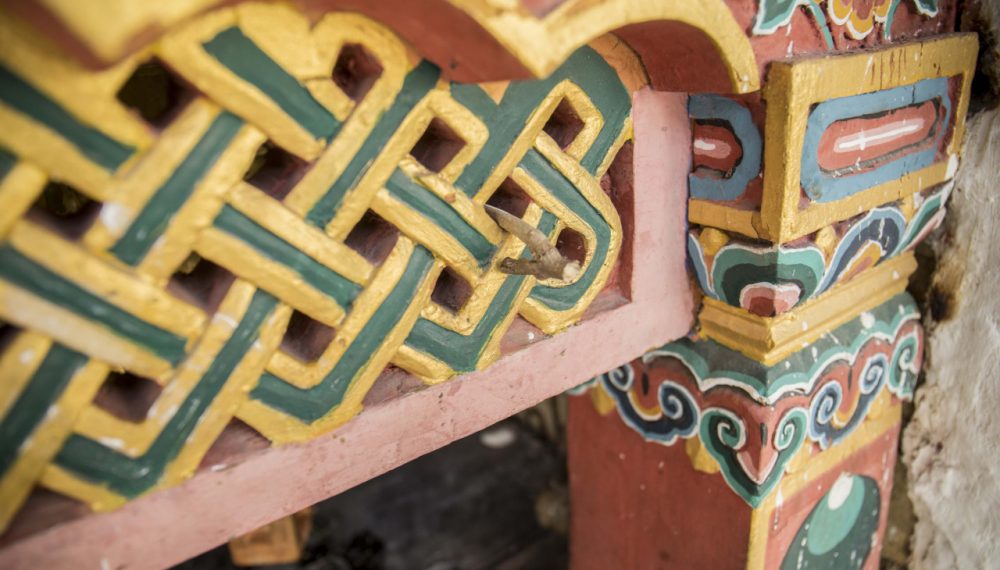 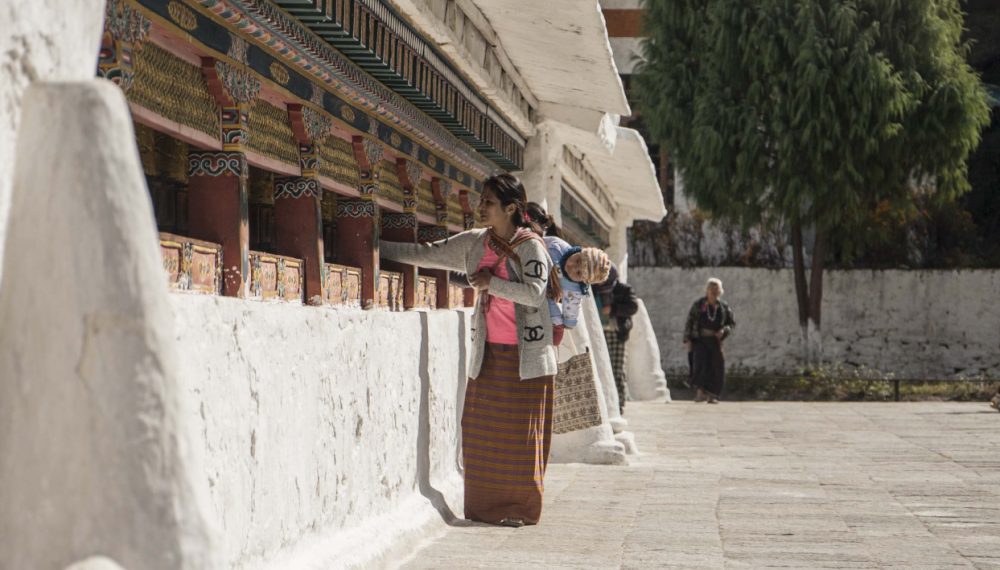 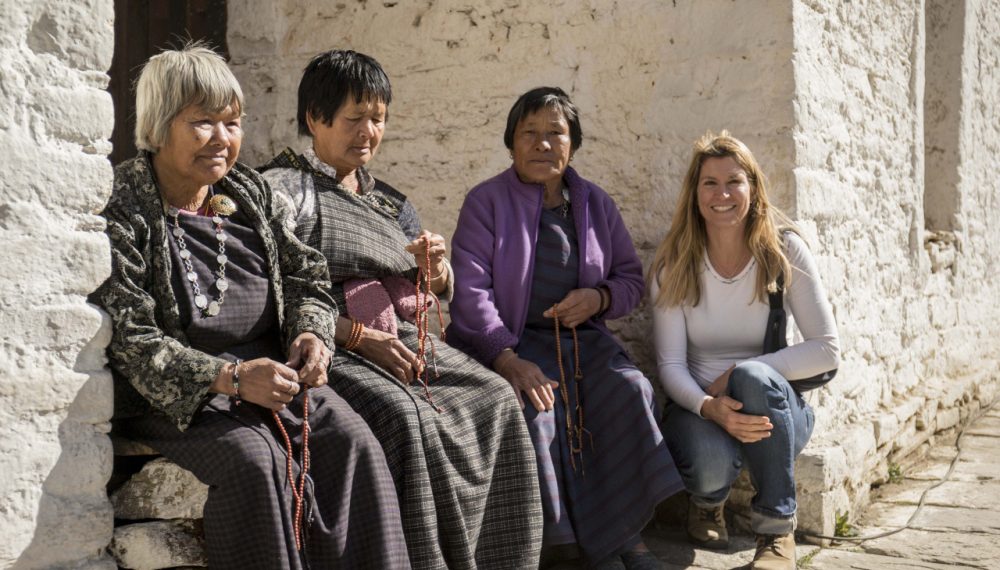 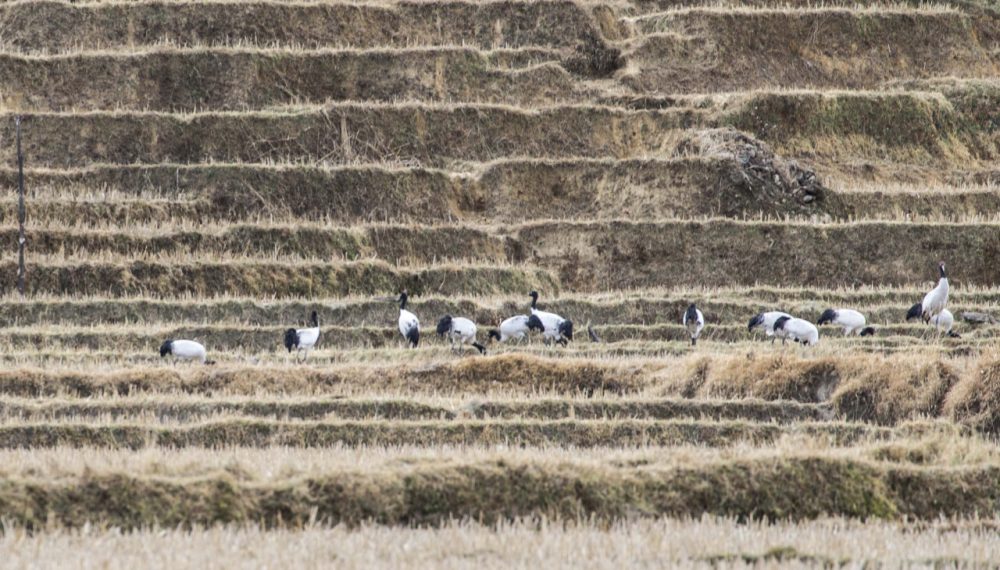 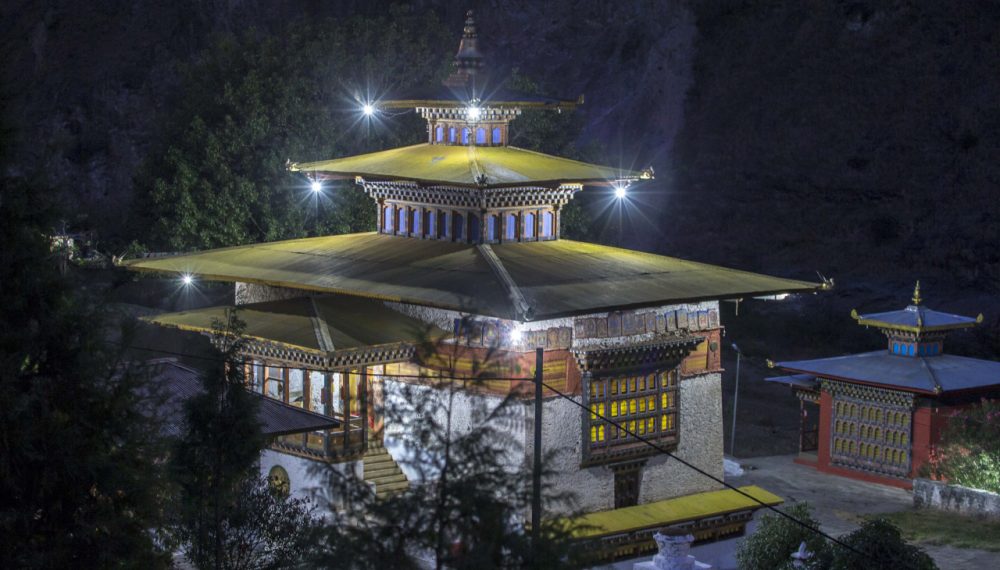 The road winds like a snake around many hills and bends, ever upwards into a deep valley. The road works are limited here but the building works of a big dam for a hydroelectric power plant are well under way. Hydropower is supplying all the electric power for the country, and is the largest revenue stream for the country. 65% of revenues for the government come from power sold to India. Second is tourism. Quite fascinating for a country that didn’t even have is own currency before 1960.

On the way up we pass one of the many white washed stupas surrounded by prayer flags.

Stupas are holy shrines with a relic inside that are used for worshiping. Some stupas are smaller like the one on road sides and often surrounded by a multitude of flags on flagpoles or strung across nearby trees. Prayer flags have different colors and meanings: The white ones on large poles are to commemorate deceased people, 5-color flags are called Lungh-ta and are for good luck. They can be mounted on large poles or strung as small flags on a washing line across . All flags have mantras printed on them.

Once we arrive in Trashi Yangtse, we cannot miss the largest stupa in eastern Bhutan. Chorten Kora is a gleaming white half dome with a golden top, built in 1740. Stupas have 3 different shapes and this one is shaped based on the Nepali design. Based on history this one has a body of a girl inside, that sacrificed herself when the stupa was build. Apparently she volunteered to be buried alive in there which gave her a holy status. Quite gruesome to listen to and one wonders whether this was indeed as voluntary as it is made to believe.

People come here to worship, some pray in the temple and all walk clockwise around the stupa’s base and turn the small prayer wheels that are installed in the rectangular base. There must be hundreds of those prayer wheels that get turned every day. Fun fact: as people walk around multiple times turning the wheels, they advance a small twig in the ornate carving above the prayer wheels. that way they don’t lose track how many rounds they have already done.

Besides turning prayer wheels Bhutanese also have their version of a rosary, a beaded string that they use to keep track of how many prayers they have already recited. This group of nice old ladies actually wanted to be photographed, one even demanding that we wait until her Kira was draped properly. While looking stern on the picture, there was plenty of laughing before and after the shot. This Stupa is very popular amongst Bhutanese and Tibetans alike and many come from far away to see it.

After a very pleasant time at the Chorten Kora, we made our way to the Trashi Yangtse Dzong. Already from afar this Dzong is very imposing and still

today houses about 300 monks. Perched high above the valley it served as defence as well as a spiritual place for centuries. As it was Sunday the Dzong unfortunately was closed but our guide managed to obtain the OK to at least enter the courtyard. Not before having donned his white shawl, which is obligatory together with the Gho for locals visiting an official place.

After the Dzong, we decided to head further north to Bumdeling, where there is one of only two places where the rare black necked crane are spending their winters. In summer they are in Tibet, in winters they come down to Bhutan. There are only about 300-400 cranes left of this kind in the world. Makes one wonder how long those can be watched before they may be completely gone.

Their habitat here is a nature reserve but as it was a Sunday, Bhutanese families used the river banks as enjoyment grounds for drinking and archery, so the cranes were keeping as far away as possible. Not an ideal setting here.

We spent a pleasant late lunch on the banks of the Gamri Chhu and only watched the cranes from afar and were later invited by locals to a cup of butter tea.

Back on our dirt road, we are getting shaken through and through until we hit the main road again. One always wonders how long 7 km can be when there are pot holes and debris on the road at every turn.

Following the footsteps of Guru Rinpoche

During the last bits of dusk we arrived at our last site for today, the Gom Kora temple (Gomphu meaning Mediation Place and Kora meaning

Circumambulation). This delightful structure is kept in very good shape besides being hundreds of years old. Unfortunately it had just been closed for the day. Standing in front of it and walking around it, we marveled at the delicate carvings and paintings everywhere.

As luck would have it, the caretaker came out and offered to re-open the temple for us. As always we had to take our shoes off and tip toed inside. Golden statues of Guru Rinpoche, one of the 3 highest saints. are always present here as well as a multitude of lesser deities. Guru Rinpoche meditated here, subdued an evil dragon demon by crushing it into the rock and thus leaving impressions of the dragon’s body and his hat. An annual tshechu held for three days in spring draws a lot of attraction with pilgrims coming as far as from Arunachal Pradesh, India.

All walls are hand painted and ornate carvings made from butter are displayed on the altar. We made our donation and had a good look around. Photographs from the inside of a temple are not allowed as the Bhutanese fear that it could encourage theft and end up on the black antiquity markets. Export of antiques are forbidden in Bhutan. Stepping back outside, the lights on the temple had come on and that gave the picture it fairy tale look.

Another wonderful day with plenty to see and learn in Bhutan.