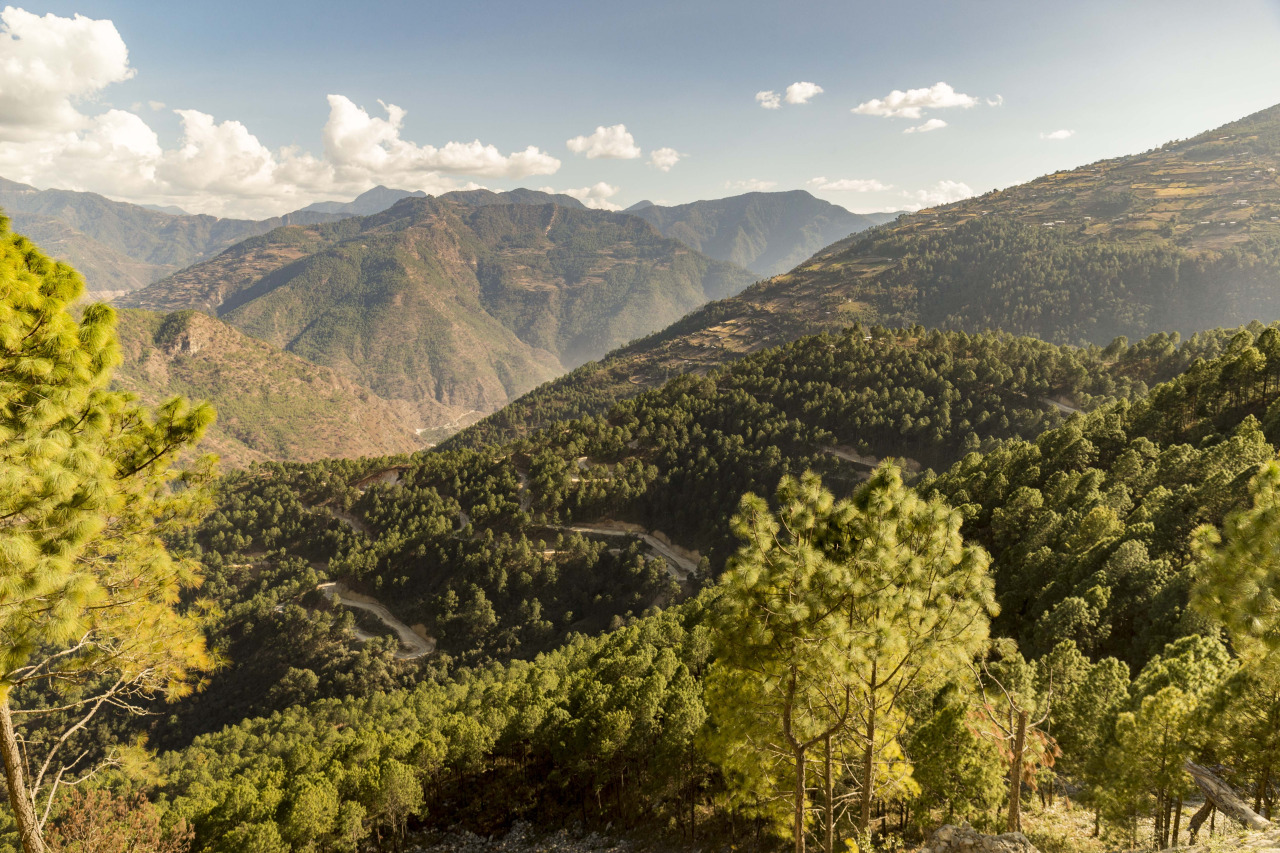 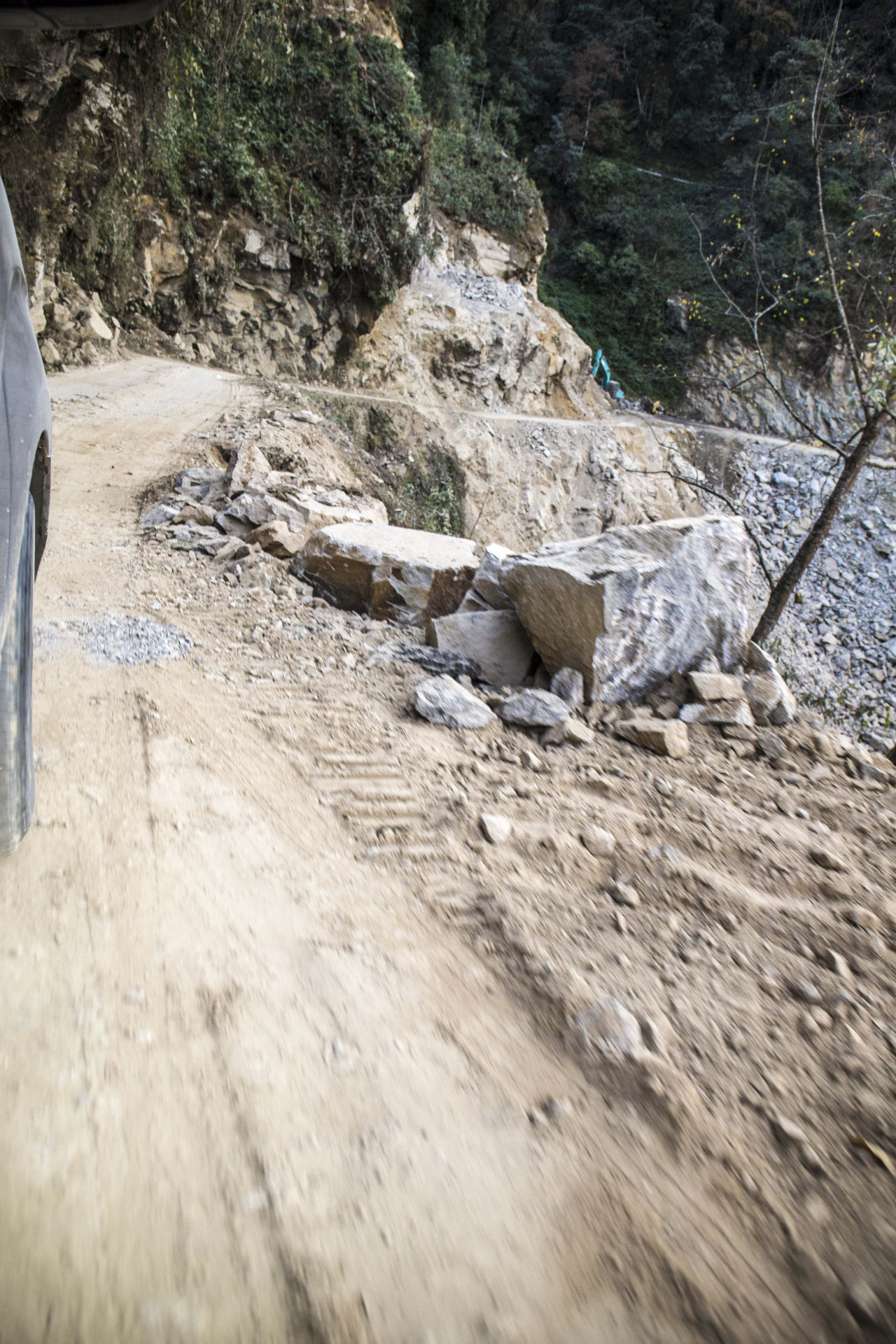 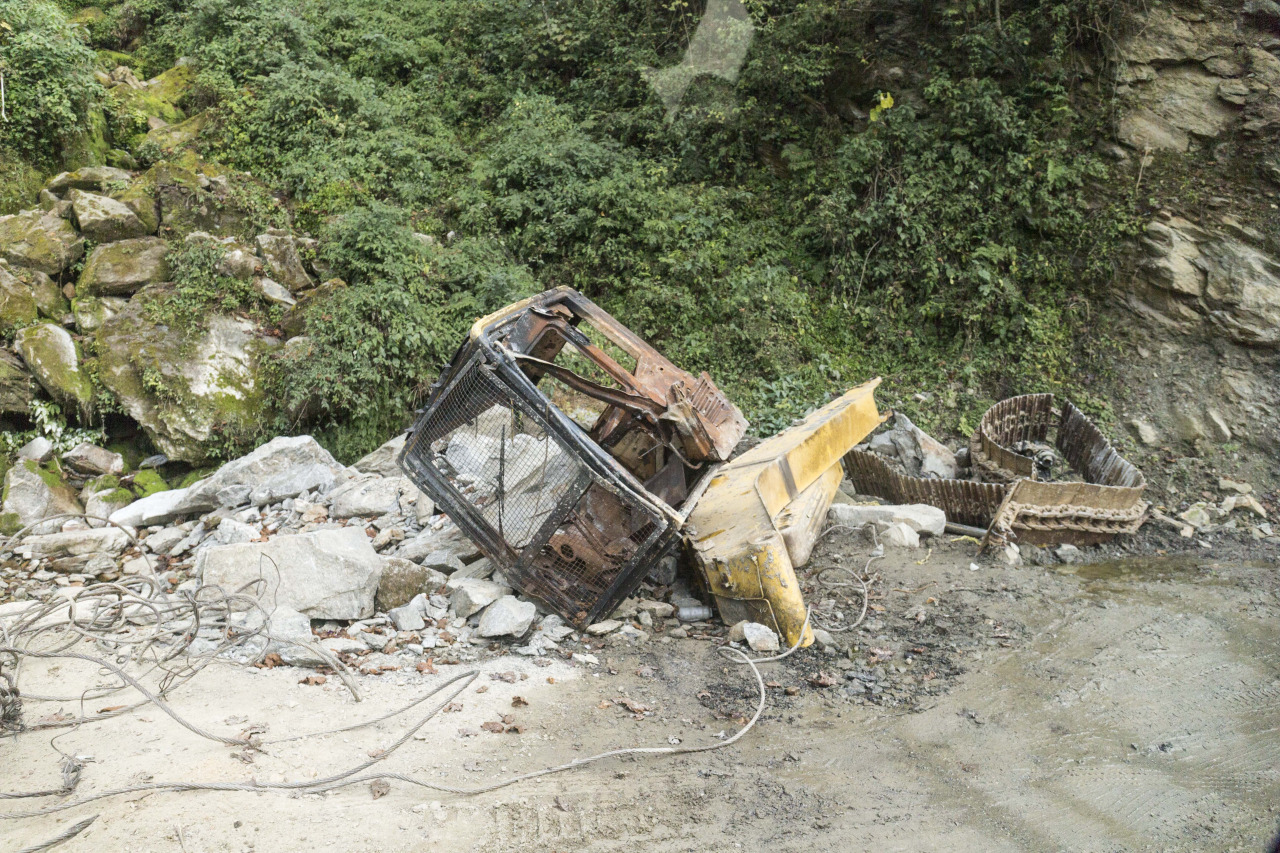 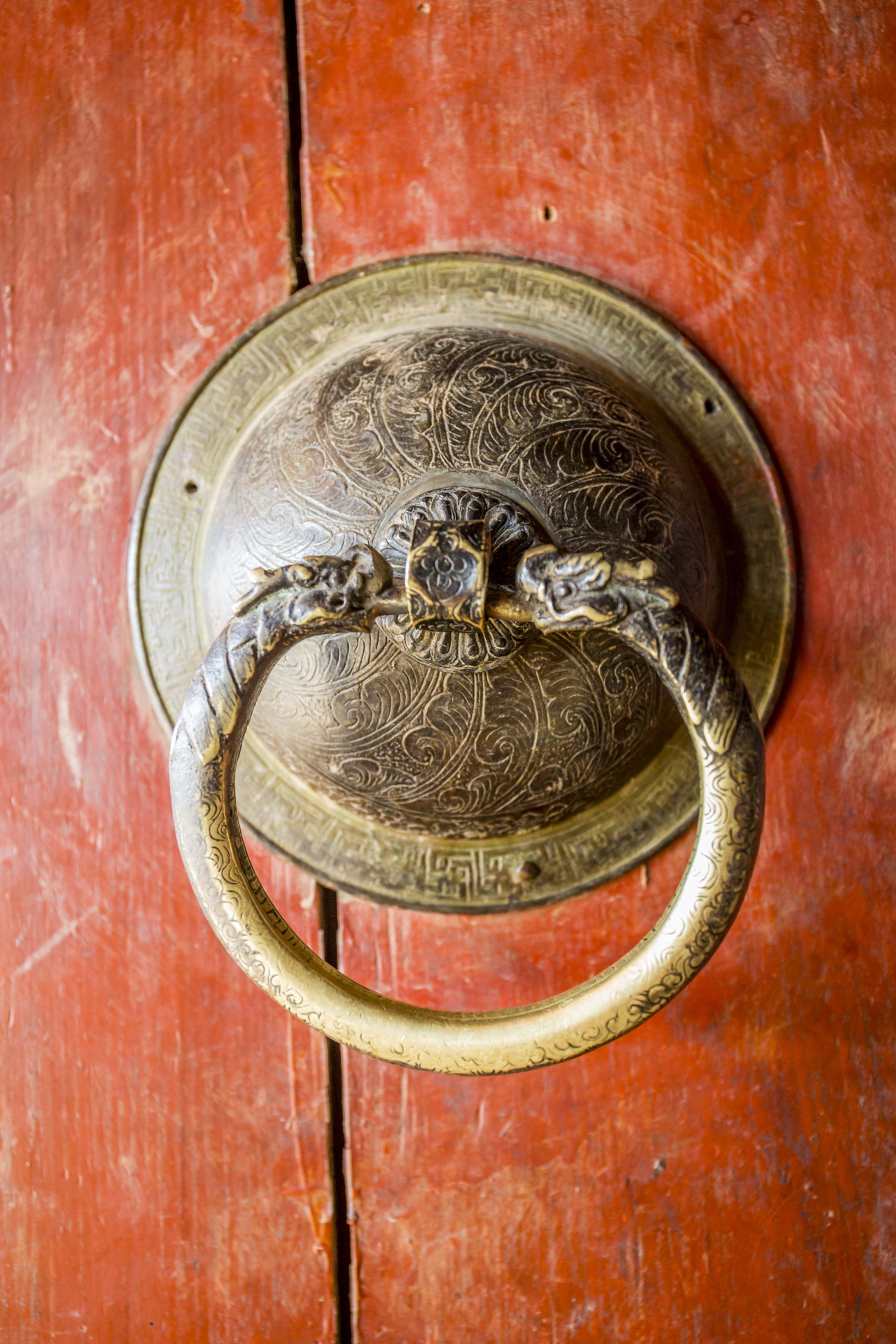 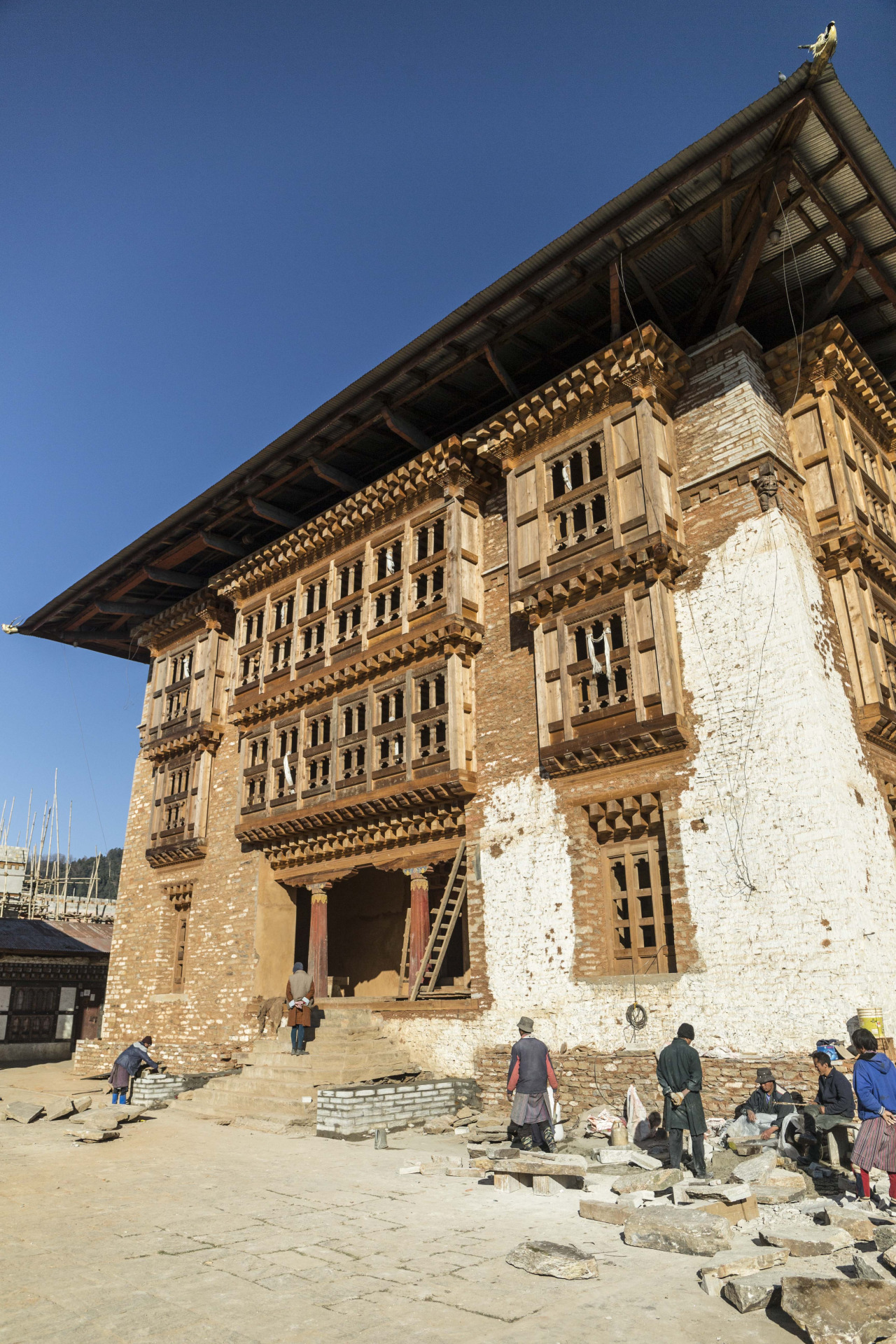 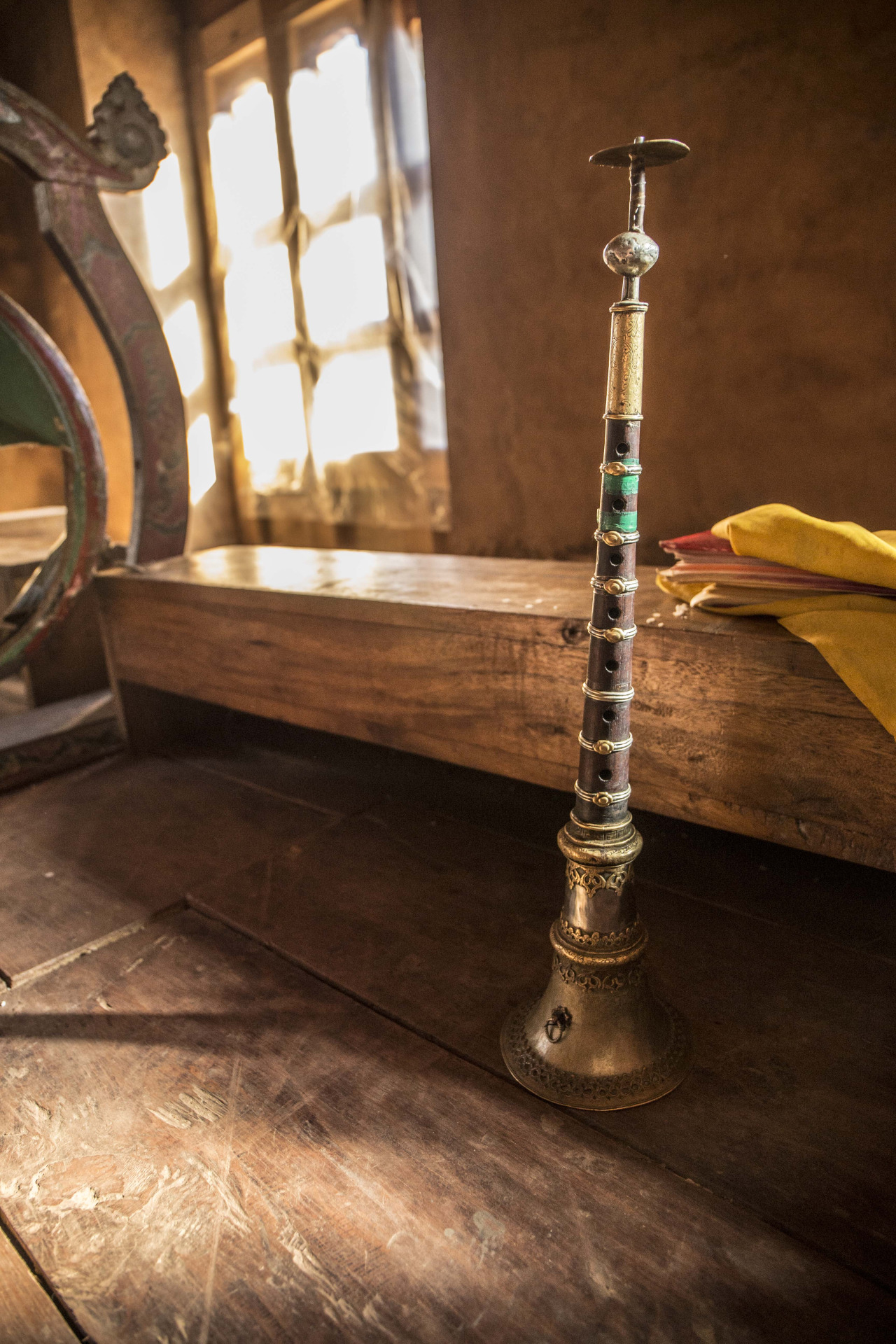 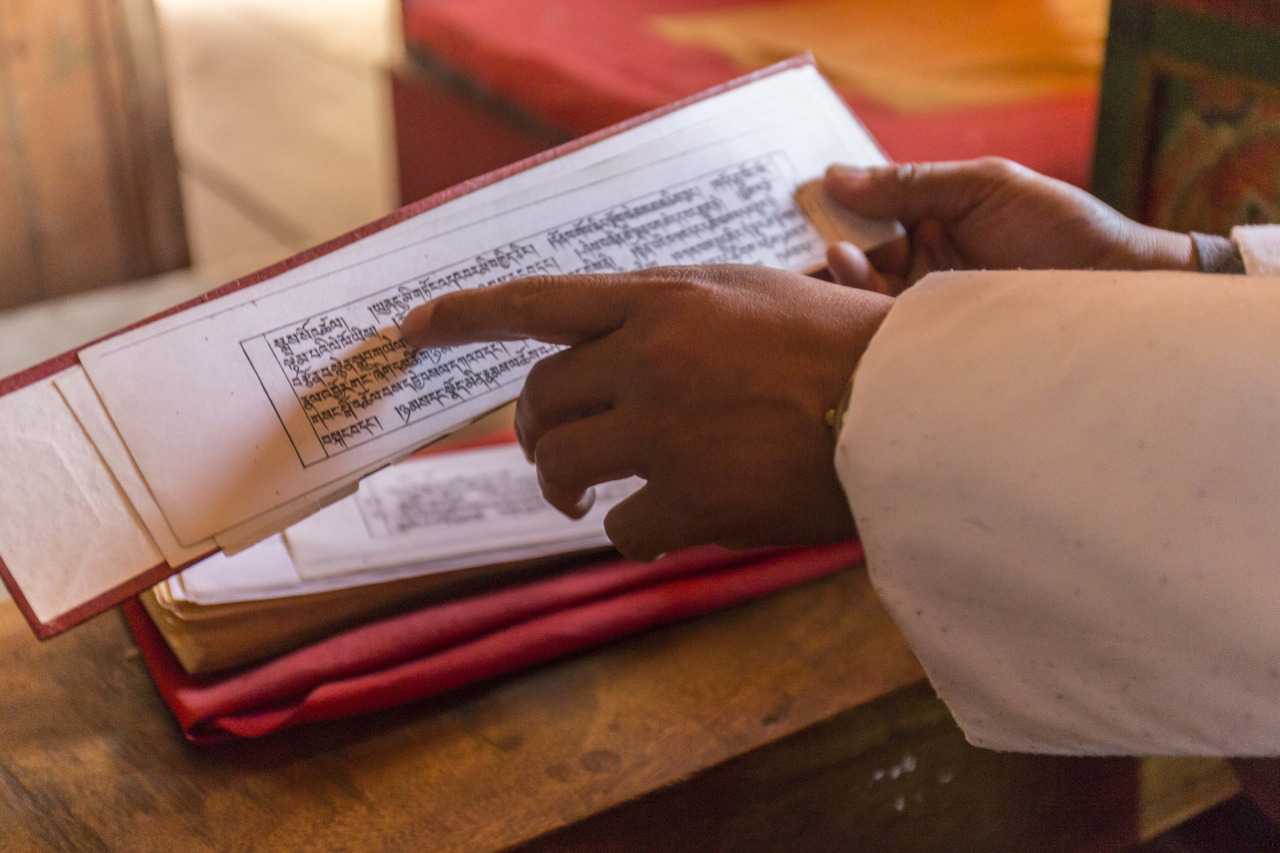 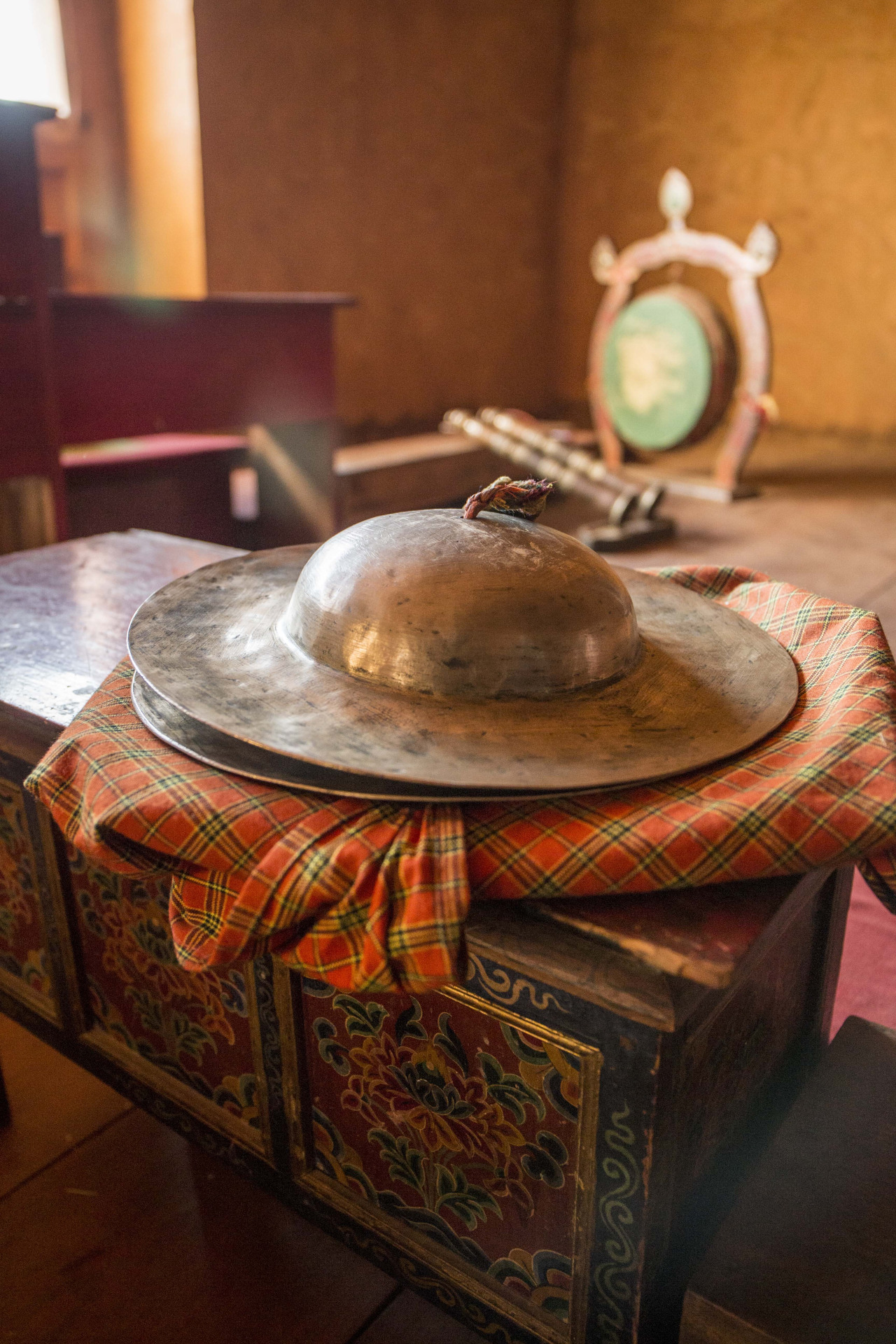 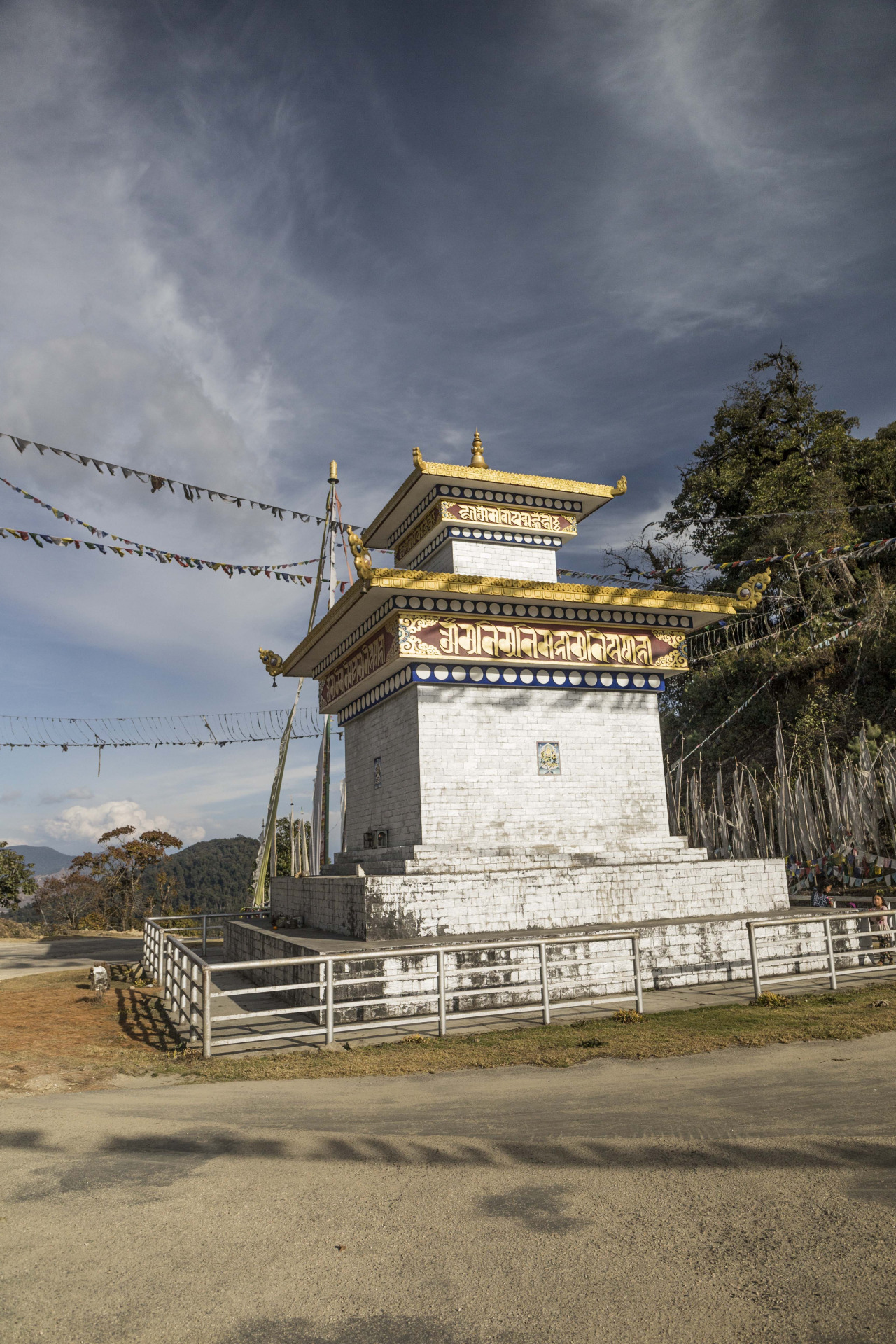 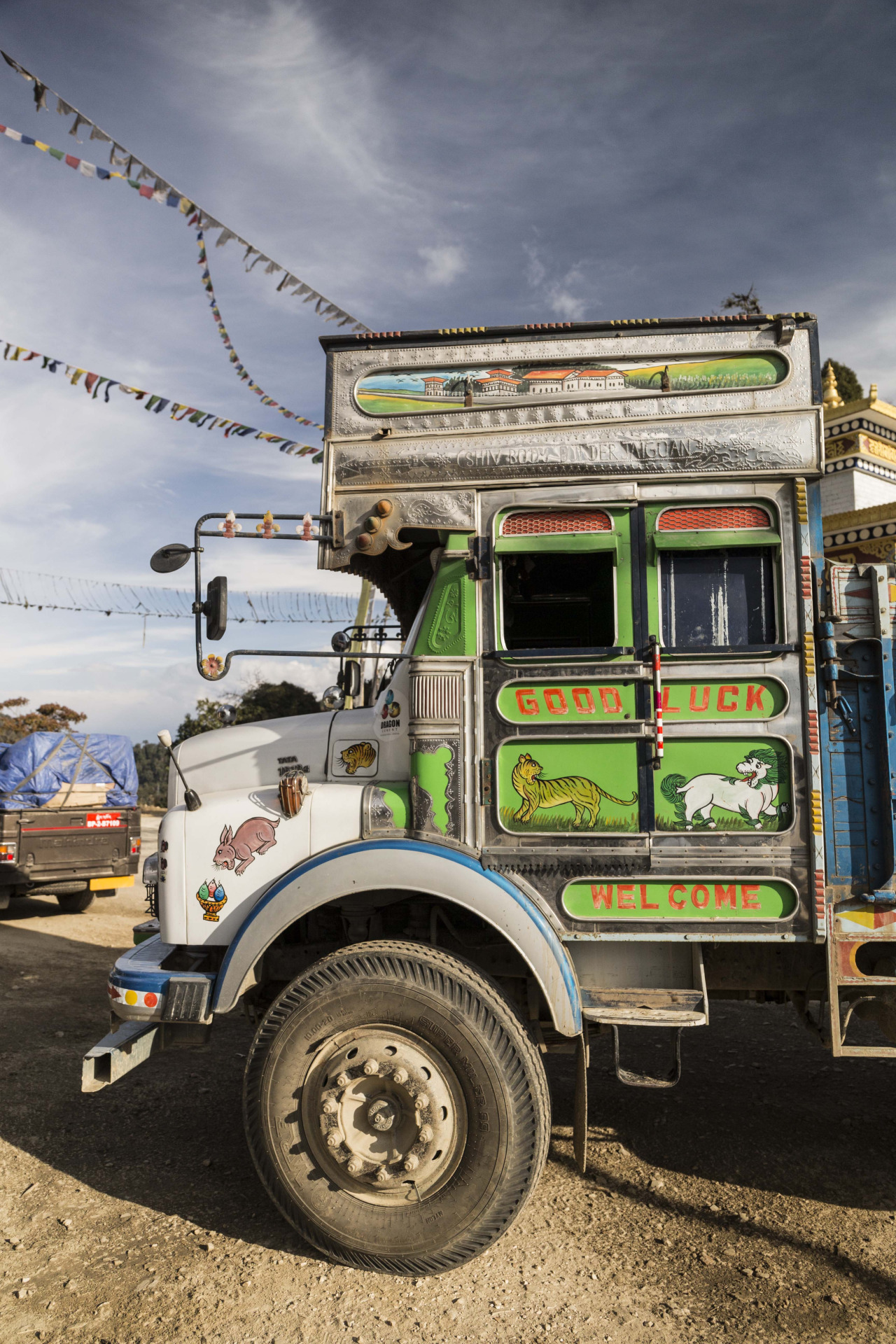 The next day we had to leave very early to drive from Trashigang to Mongar further in the West. Another road block, opening time between 10 and 10.30 AM only. The road construction works are a massive undertaking for Bhutan. A section of about 20 km gets put out to bid and awarded local or Indian companies to widen the road and pave it new. As 100% of the roads are on steep slopes and hill sides, the rocks produced by the detonations as well as the huge amount of rubble has nowhere to go.

There is no big dump site where things can be stored or deposed of. Imagine that happening with different contractors all over the country at the same time. Then you get a feeling for the difficulty of the task ahead. Rocks that will still be needed as road base are being broken into smaller pieces by hand, rocks and rubble that are in excess of what’s needed is being dumped downwards, creating very unsightly slopes of massive rock avalanches, destroying everything in its path. Progress clearly has its price.

Some road sections are sheer rock cliffs and one wonders how they’re going to widen the road to a 2-lane highway. Some sections are so narrow with all the debris lying about that you can inch only forward, looking very carefully that your tires stay on firm ground. It’s dangerous work too, as many broken machines, tools and other damaged parts used in the construction are scattered about on every corner. The rock is often granite or marble, so a tough nut to crack. As you can see, not every machine survives the tough work…

GPS? No need – your driver knows where to go.

After having made it to the road block in time to pass through, we weave through the rubble until we come to a dirt road without road signs. Road signs seem overrated here in Bhutan anyway. Only the drivers know where to go.

Upwards we went on a dirt road, gaining a good 1350 meters in altitude on an 18 km drive. Beautiful little villages line the way, always with the same pretty houses. Imagine charming Swiss alpine villages, just with Buddhist prayer flags all over the place. That is rural Bhutan.

Finally we arrived at the top of the mountain where the monastery sat we wanted to visit. Drametse Goemba is one of the biggest and most important monasteries in Eastern Bhutan, founded in 1511. It normally houses about 100 monks, but due to massive extension works (an entire new section is being added) it is currently under construction. It will be able to house 300 monks in the future. We were allowed to walk around and even go inside to see the old section of the temple. Each entrance door of a Dzong or Goemba (monastery) has a set of 2 large and very ornate opening rings that pull the doors outward and open, giving way to a rectangular courtyard. In the middle sits the utse, the large square tower that serves as temple. The utse is always the highest building of each complex.

As luck would have it, due to the construction works, most of the statues in the Drametse temple were removed and we were allowed to take some pictures inside.

In the prayer room you see a Bhutanese oboe, cymbals and drums as well as a book of holy scripture. Traditional prayer books are not bound like a book we know. They are a stack of rectangular pages with the size about a quarter of an A4 page. Each page holds a prayer paragraph and the two ends are made of wood or card board. The whole thing is wrapped in cloth when stored. The Bhutanese characters are very pretty to look at, but impossible for us to read.

After the monastery we headed the same dirt road back down and continued our way to Mongar.

Coffee stop at the Korila Pass

Last stop for us before reaching Mongar was our first of several mountain passes: Korila Pass, at 2300 meters high. It’s one of the smaller passes, but it had a tiny Café on top where we stopped for tea and (Nes)coffee and enjoyed the wonderful mountain vistas on both sides of the pass.

Each pass has a Stupa on top and lots of prayer flags everywhere. While sitting in the sun watching the (very light) traffic we were noticing that cars, trucks, busses, any vehicle in fact was circling the stupa once before continuing on their way. It looked a bit like everyone driving once around a traffic circle before driving on. Turns out, they do it as a good luck gesture. Only clockwise of course. Good luck is very important to the people here, and looking at the roads, you can understand why most trucks spell it out in bold letters!

Finally we arrive in Mongar and check into our nice hotel and looking forward to a tasty meal and a good nights sleep. But we weren’t prepared for what came next…