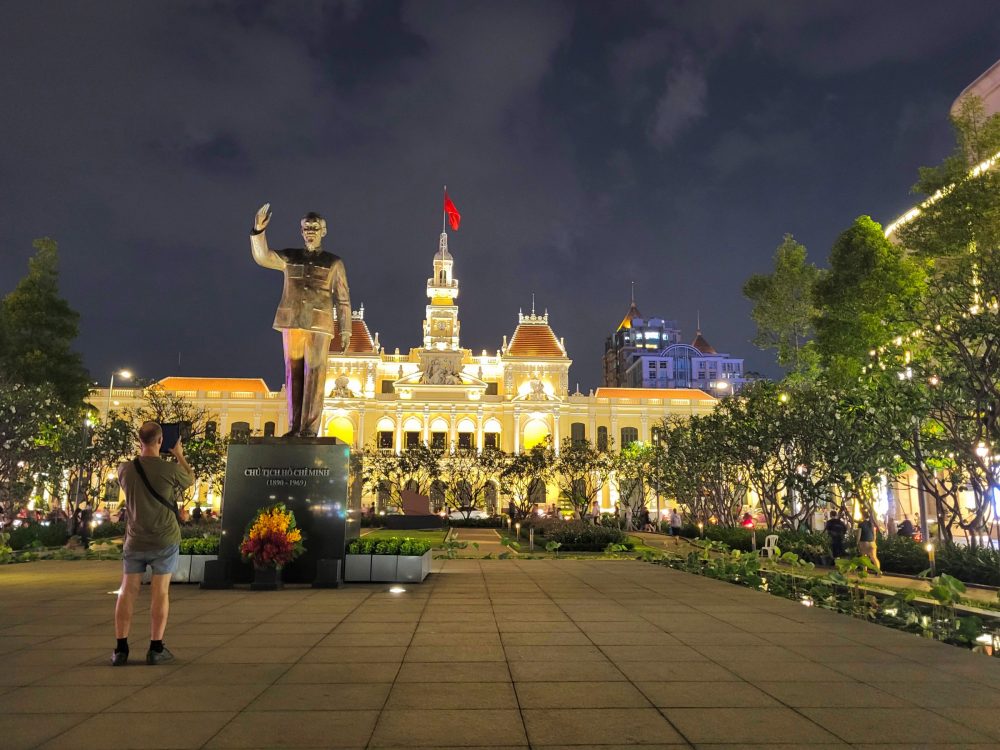 After long and exhausting flights (Esther two planes, Chris four planes), we both made it to the hotel in Saigon (we like the old name better than the new, turns out many of the locals as well…) and practically just dropped into a deep sleep. The next morning we got up fairly late at 7.30 AM local time. Our journey across Vietnam can begin….

The best way to arrive at your new destination is a healthy local breakfast. And so we did as the locals do and had rice noodle soup with beef for breakfast. Plunged into a new world seeing stir fried rice and chicken curry for breakfast at the buffet we knew we were definitively not in Europe anymore.

Our favorite, fresh fruit was a bit limited, consisting of papaya, watermelon and dragonfruit. As many ex-colonial countries, the Vietnamese prefer instant coffee with condensed milk (that is hardly heard of in Germany anmore) to real brewed coffee… not drinkable for coffee aficionados like us. Luckily there are many coffee shops on every corner that serve cappuccino or latte close to the real stuff.

After our breakfast, we were already expected by our driver and guide. We had a whole day to explore Saigon City. Where to start. It’s not really a pretty city.

Neither architecturally nor street wise. It’s a mega busy and bustling hub that houses more than 8 million people. …And it feels like 8 million scooters all trying to cram into the streets at the same time.

Crossing the road even at a traffic junction with a pedestrian walkway feels like a mad dash for one’s life. It’s like Paris at the arc de Triomphe. When you start crossing the road, don’t stop or you’re run over…. scooters don’t care about red and green lights, if the road is blocked, they simply take the pedestrian walkways unless it’s blocked by a anti scooter set of rails. One way streets? – no problem for scooters- they just ignore them.

So we got into our air conditioned car (outside it was already a pretty humid 29 degrees) and made our way to the Independence Palace.

Chris had an immediate flash back to his early communist Prag days. What was once a lovely palace in refined French architecture, known as Norodom Palace and was housing the king, was rebuilt after having been bombed in the war as a very sober, communist monstrosity. It was named Independence Palace or Reunification Convention Hall to honor the reunification of Northern and Southern Vietnam.

At every turn you felt the 60s and 70’s in communist Europe shine through. No ornaments whatsoever, everything is functional, sober, without frills. But of course not complete without old tanks in the back yard and an old helicopter on the roof. It’s a museum now, but still occasionally hosts top guests at international meetings here.

It’s weird here as this is a socialist country and you can see communist references on posters, buildings and monuments everywhere, but the people here are all about commerce and capitalism in the streets. A weird mix.

Due to the heavy traffic we decided to walk the town on foot and set out to a small replica of Notre Dame (did I mention South Vietnam was a French colony once?). Unfortunately it was all scaffolded up. You could barely see the outline. But next to it was a lovely old colonial looking building that still serves as the main post office. Complete with the old phone booths, luring Chris in to make a call…

On we went to an equally impressive City Hall and Opera House, built in the 1800s. It’s nice to see some of the old buildings have survived the war and are still being used today. We decided on the spur of the moment to buy Opera tickets for a Bamboo Circus troupe in town performing at the opera that evening.

By now our stomachs told us it was definitively time to fill up and so our driver took us to China town for a yummy lunch. Missing her morning cuppa coffee, Esther decided that Highland Coffee ( a local Starbucks) had a latte to go and was happy to try.
As we always love to explore the local markets we stopped at Binh Tay Market in China Town.

It’s not touristy and here is where the locals shop. Narrow alleyways, some under cover, some outside here we squeezed through hundreds of little stalls, selling everything from toys, to clothes to kitchenware but also food items as weird as dried sea cucumbers, dried sharks finns, swallows nests (used to make soup?!), and a huge array of dried mushrooms of all kinds.

We were not sure what was used as medicine and what was for eating. Monk’s fruit and a strange hairy little berry we had never seen before. Esther tasted it but it did not make the favourite list. And everywhere sat street food vendors cooking on little stoves or selling prepared delicacies. Customers huddled on little tiny chairs around eating.

Nobody really speaks any English, French or German and so we weren’t brave enough on day one to just dive into the street food without any explanations. On our first day we wanted to be rather safe then sorry – even though some of the dishes were tempting, while others were just a tad to exotic.

After squeezing through the crowded market we met our driver again for our last stop. The oldest (1760) pagoda in town is the Thien Hau pagoda.

Built in the 18th century it has lovely ceramic reliefs everywhere, especially impressive above the entrance. Through some iron gates the intense smell of incense hit one immediately. The tempel/pagoda is dedicated to the lady of the seas, rumored to help sailors in need. Remember we talked of commerce? This is the first temple we have seen that even has selling booths for donations.

You donate a certain amount and your name gets put on a pink slip with the amount and posted on a huge wall for everyone to see. You can also buy large incense coils and sticks that when lit are either stuck in a big sand basin or hung overhead with your name for good luck.

One such coil bruns a whole week and walking underneath you have to be careful that hot ash is not dripping on you. The Chinese definitively know how to make money.

Back at the hotel, we had a small rest before having to head out on foot again to the opera for a lovely bamboo circus show. The acrobatics were impressive and nearly Circus Krone level.

We let the day end with another yummy local food experience before packing our bags for an early start tomorrow morning to the Mekong Delta.