First invitation to a Bhutanese home 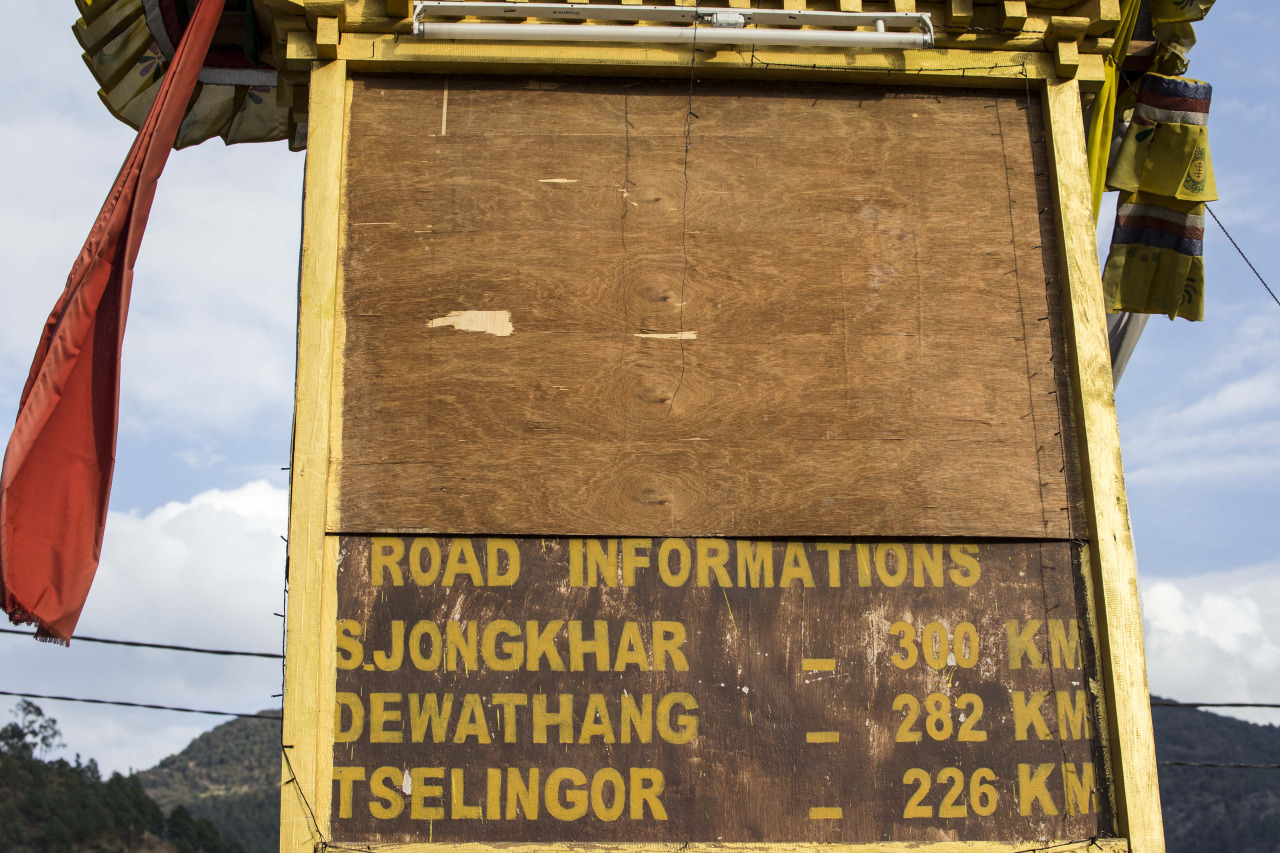 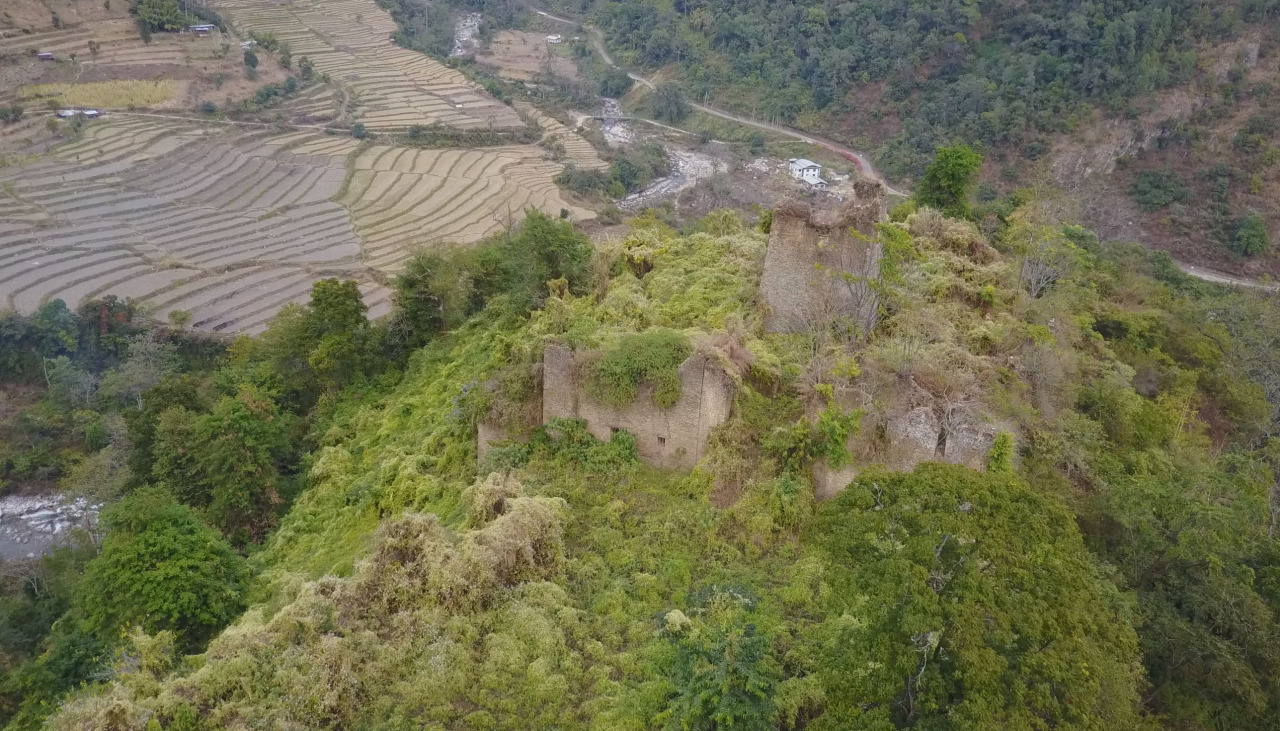 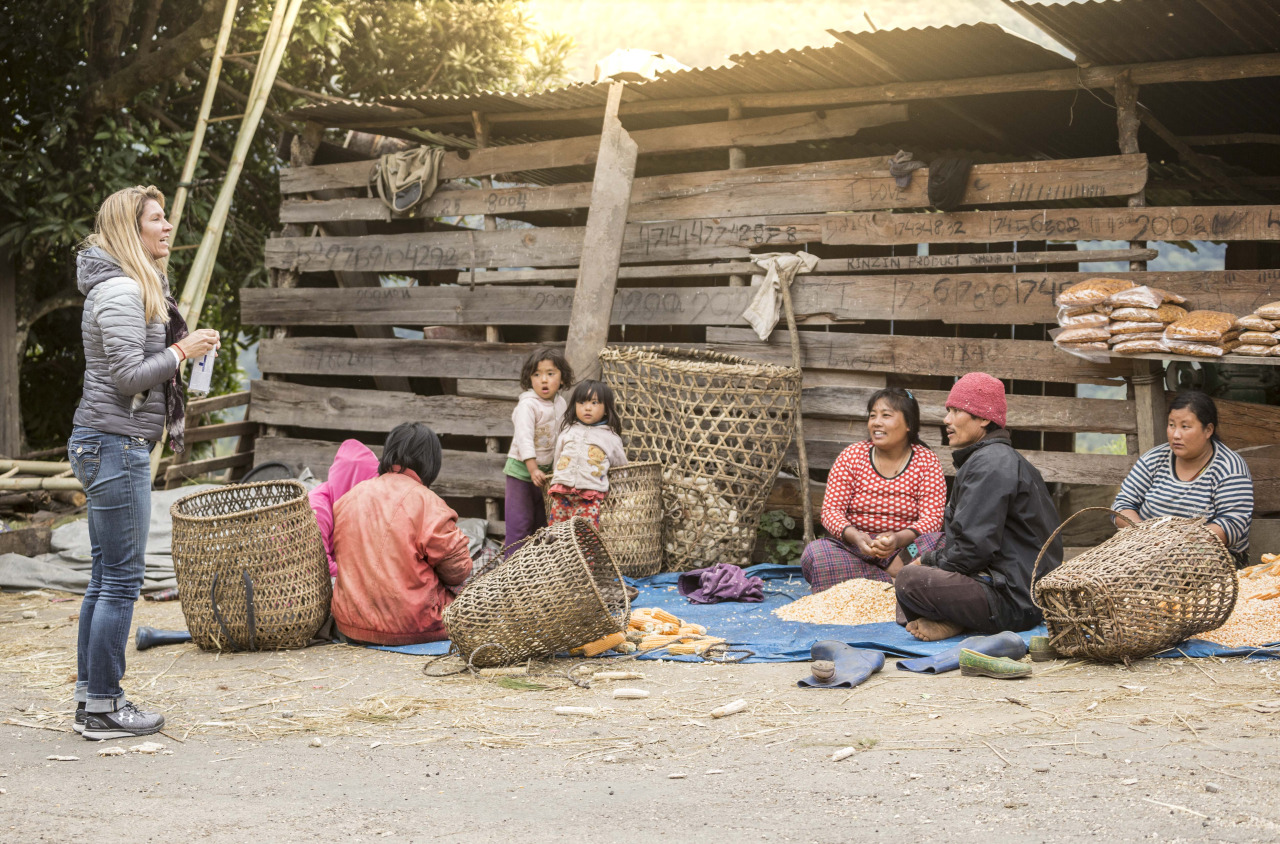 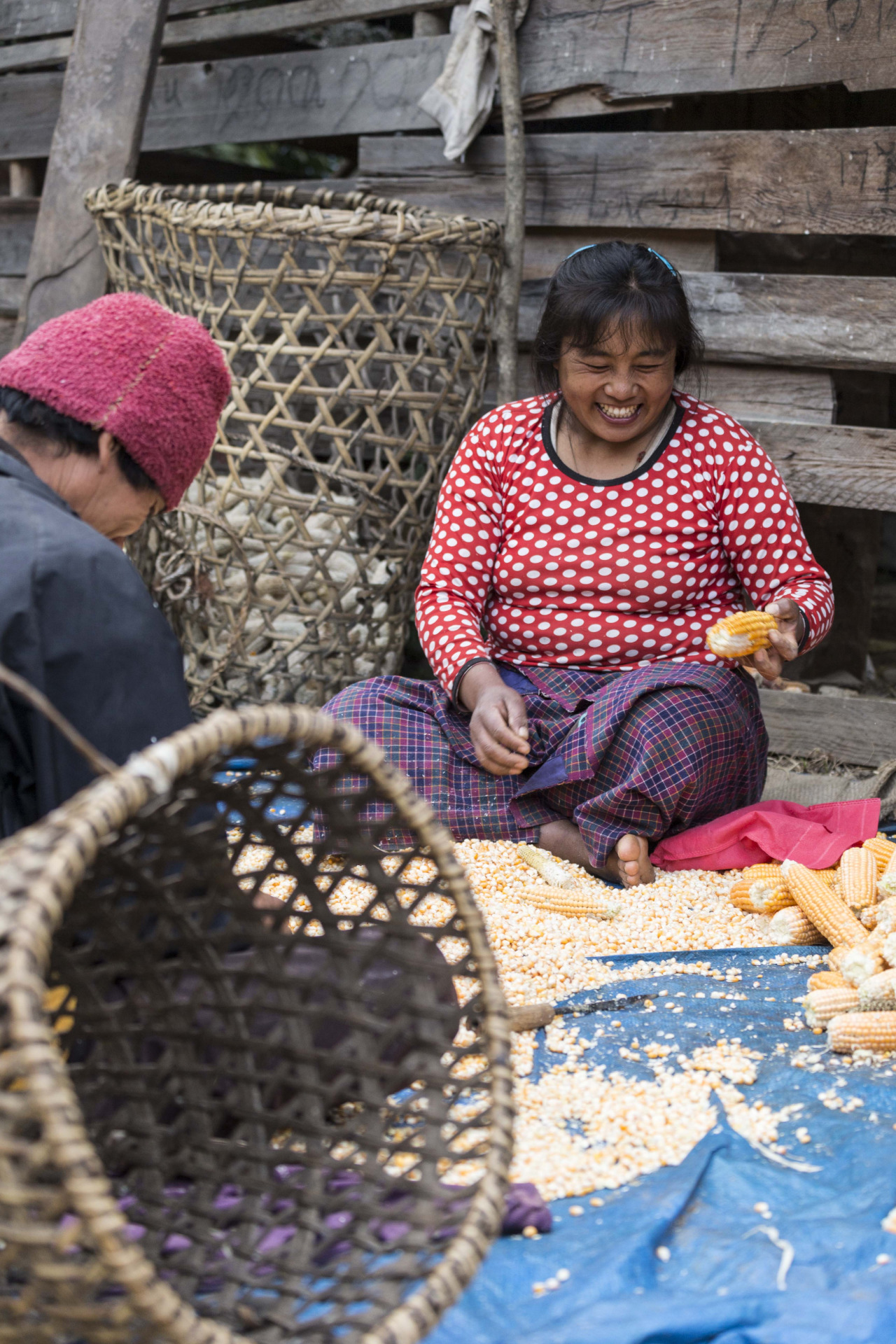 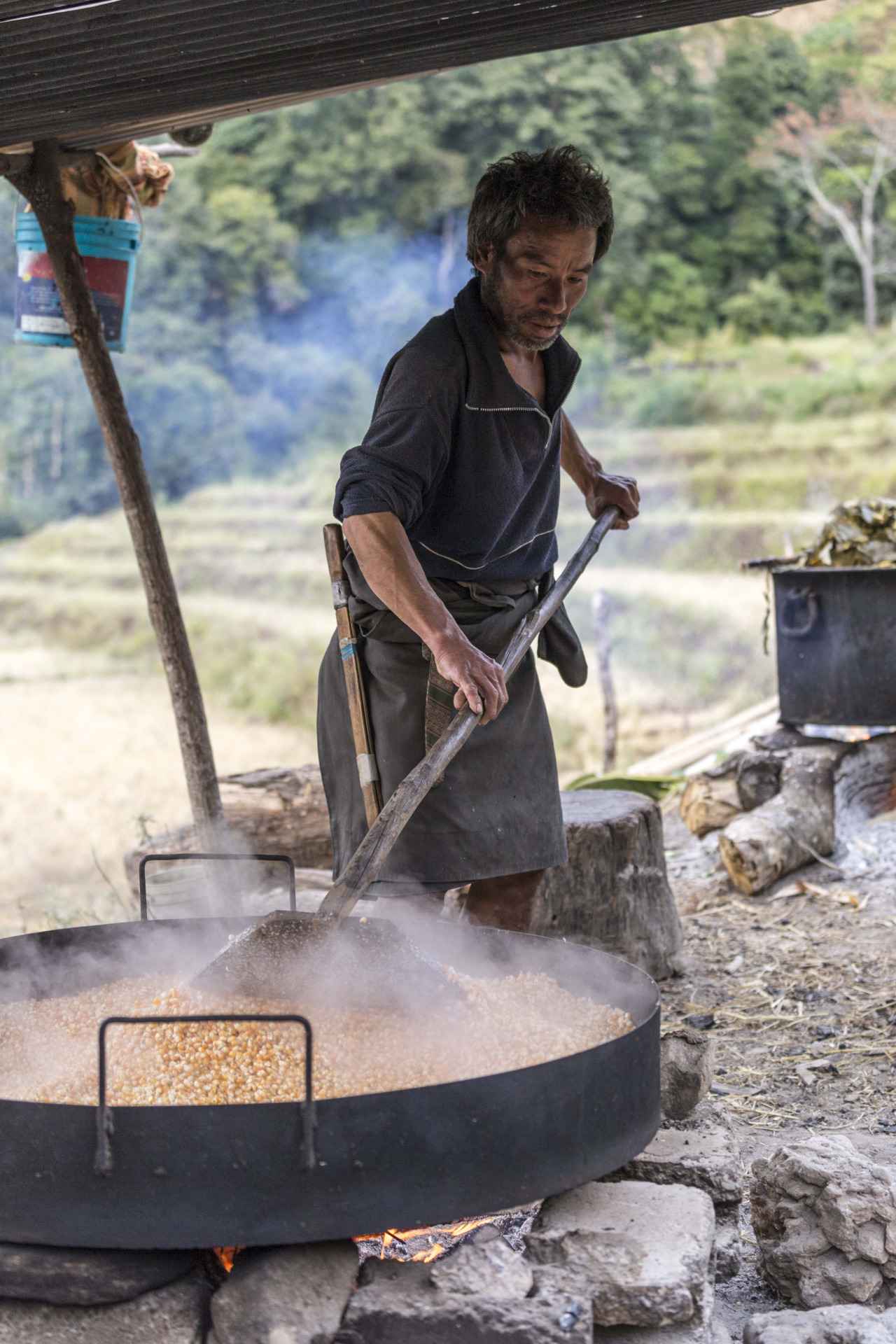 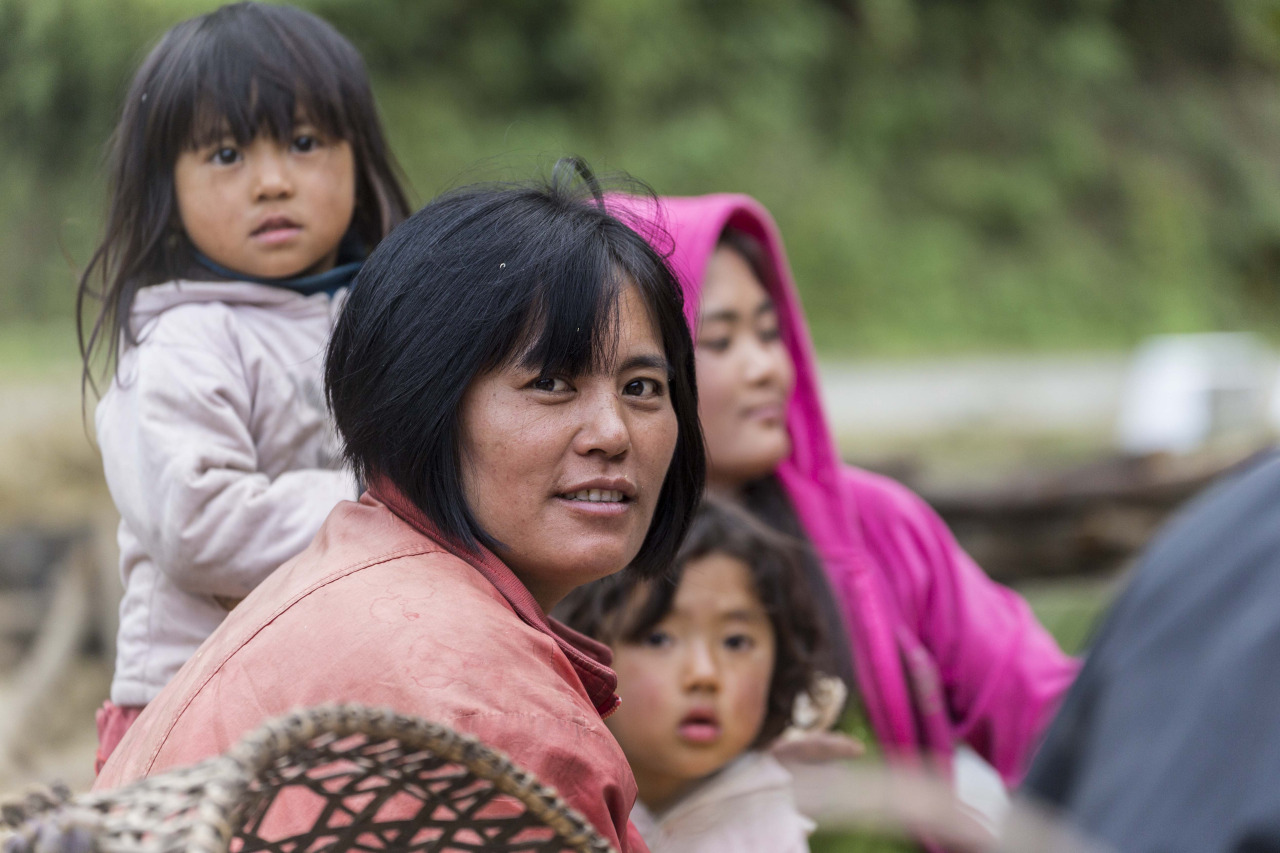 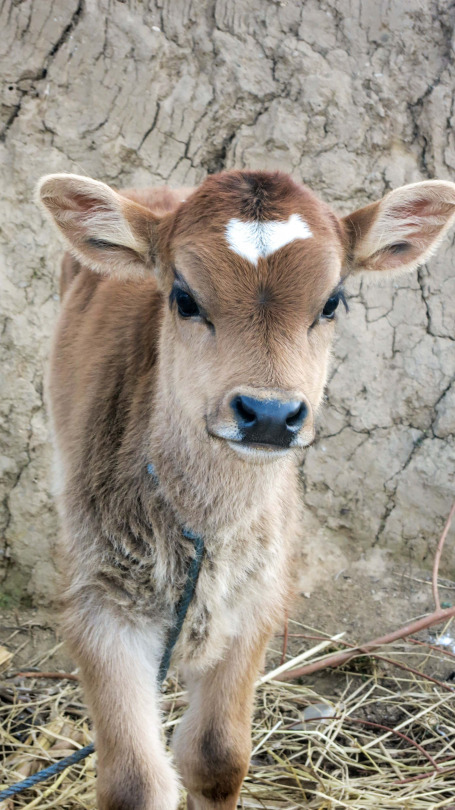 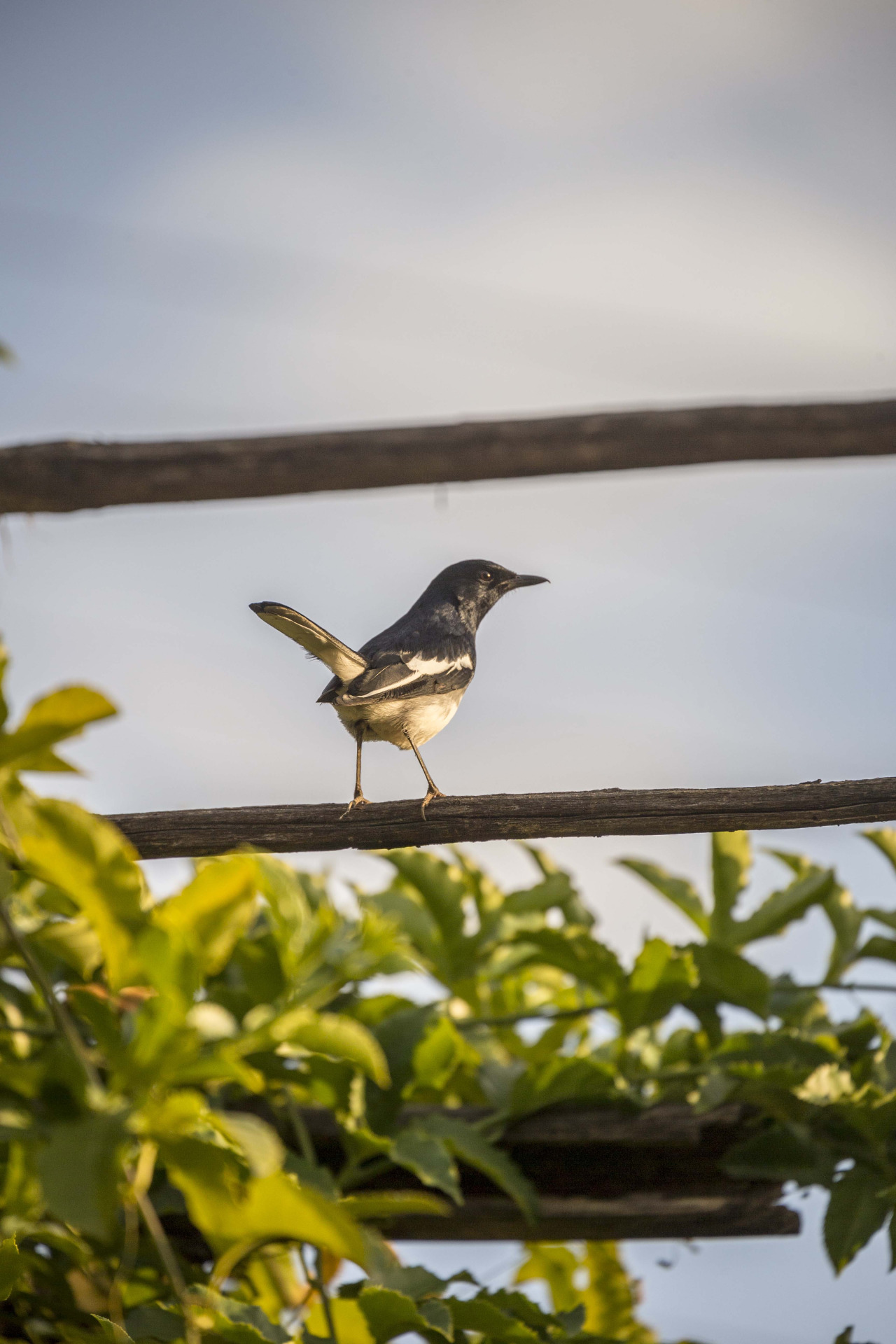 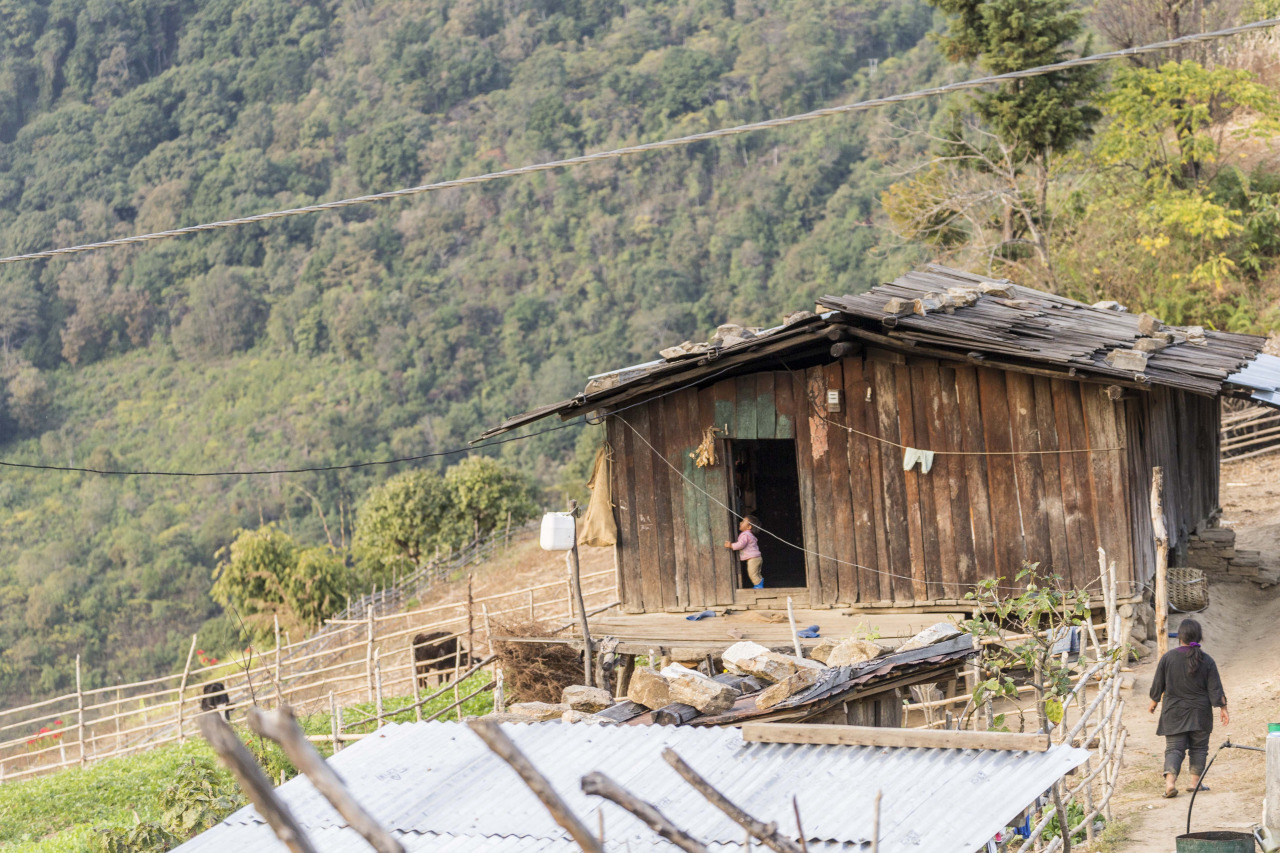 Without too much regret we left Mongar at lunchtime to drive to Sengor, a village half way to our next big destination: Bumthang. Distance to Sandrup Jongkhar, where our journey started is 300 km so far.

On our way, we passed the ruins of the old Shongar Dzong. It was destroyed in 1899 and never rebuilt. Instead the dzong at Mongar was built in 1930. Shongar Dzong was believe to be built in 1100 as one of the first Dzongs of Bhutan. The size is quite impressive, even when forest reclaimed the location with a vengeance. On we went in a serpentine bonanza, more than 1.000 meters gain in altitude again in a very short period of time. Weirdly enough 3.000 meters altitude did not feel as cold as we are used to from Europe. It was still quite pleasant, banana trees growing and all sorts of vegetables. Dense virgin forest everywhere except the few spots where farmers carved out a few acres for their crops. All is steep hillside and every meter must be fought for.

Learning how to make Bhutanese popcorn

Sengor was only supposed to be a little overnight stop over but it turned out to be a delightful encounter with the local population. We hiked up the last kilometers to our little guest house to stretch our legs after the long driving over bumpy roads. By the road side a farmer family was sitting and happily laughing and bantering while peeling corn. We were of course the attraction again, and our last reserves of Ritter Sport chocolate found grateful little hands and mouths. Puzzled at first how to open that little packet, they quickly found ways and gobbled the chocolate down.

After the corn gets peeled and soaked in water, it gets roasted in a big pan before being crushed to make a local version of corn flakes. They offered us some, but to be honest we were fearing for our teeth biting into them as they were so hard. We felt we needed to soak them in milk for a while before eating them, while the locals snack on them like popcorn.

Hiking up further we saw lots of different birds. It turns out that this is the bird watchers paradise here. Ornithologists come from all over the world. Ischa, this one is for you: we took a picture of one of the birds we have no idea what it’s name is. Feel happy to find out….

On the way we passed several very basic but very neatly kept log cabins. Those are the people who don’t have the money yet for stone houses. But that doesn’t hinder them to invite any guest passing their door. They live off the land, grow their own food and collect milk from their cows to make butter and cheese. As a rule a new born calf gets the exclusive mother’s milk until they are 6 weeks old. Only after that s the farmer allowed to take some for himself. Asked what they are doing with so many male calfs, as they don’t slaughter and eat them, they said, we just use them for ploughing and collecting manure for the stoves. Sounded like a pretty cushy life to us.

Beware of the ‘special’ Ara

One family was just making butter when we passed their hut and in typical Bhutanese fashion invited us impromptu for an afternoon drink. Not knowing what we were up to but curious enough we said yes. They led us into their modest home, just consisting of 3 rooms. One being the kitchen, where the acrid smoke of the woof burning stove made our eyes water, one being their living room / main room and one used for their altar. The whole family of two adults and five children sleep all together in the main room. Their little house was tidier and more organized than we ever managed to keep our house! We were offered mats to sit on and polite conversation started. Turns out the brew of welcome offered here is not tea as to be expected, but ara. Ara is a home made brew from either wheat, barley or rice and it has about 17-20% alcohol.

Not enough that they serve it in large coffee mugs full to the brim (before and food is being eaten – everything else defies the purpose) also as a special offer they pour melted butter and egg into it. Chris was brave enough to accept a cup together with our guide, who clearly was looking forward to this. Esther opted out, claiming that she prefers a non alcoholic drink. So she got a plastic bottle that had a strawberry on the label.

We both had not eaten since lunch and so much alcohol on an empty stomach was even too much for Chris. Just when he was happy to have sipped about a half of the cup, the host started to refill it to the brim again. Desperation on Chris’ side was evident :o) He asked our guide politely if he could leave some in the cup (which he did) while our guide, half the size of Chris drank his cup and a half with delight. He claims that alcohol made much more sense to drink before food, so the effect could be better felt. Well nothing to argue there… Esther’s soft drink was not any more enjoyable though. It vaguely tasted strawberry with jello bits put inside the drink. Chris later claimed he did not know which one was worse, but it was definitively a memorable experience that showed again, how a farmers family that had so little was instantly so generous inviting complete strangers into their home.

A nice end to our exhausting day with a good nights sleep this time without dogs barking all night.