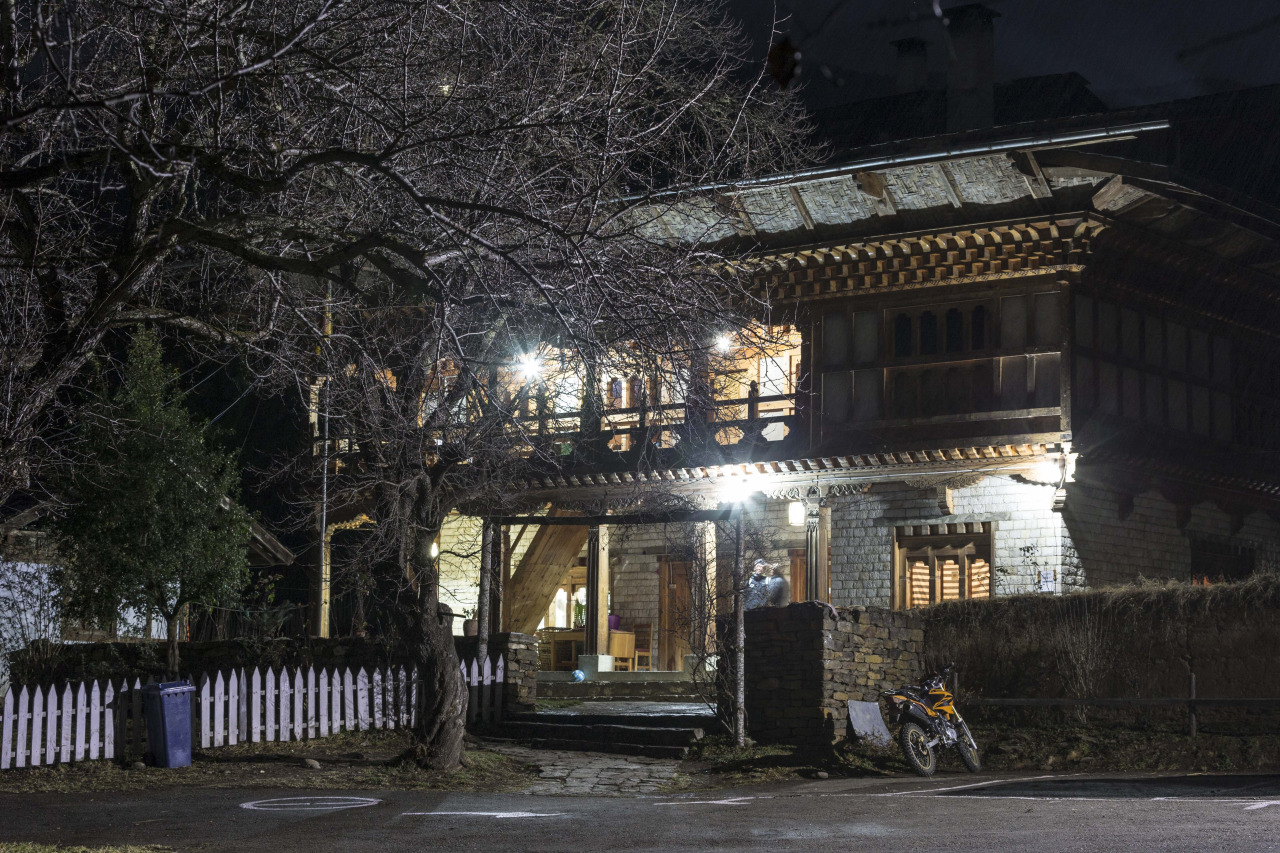 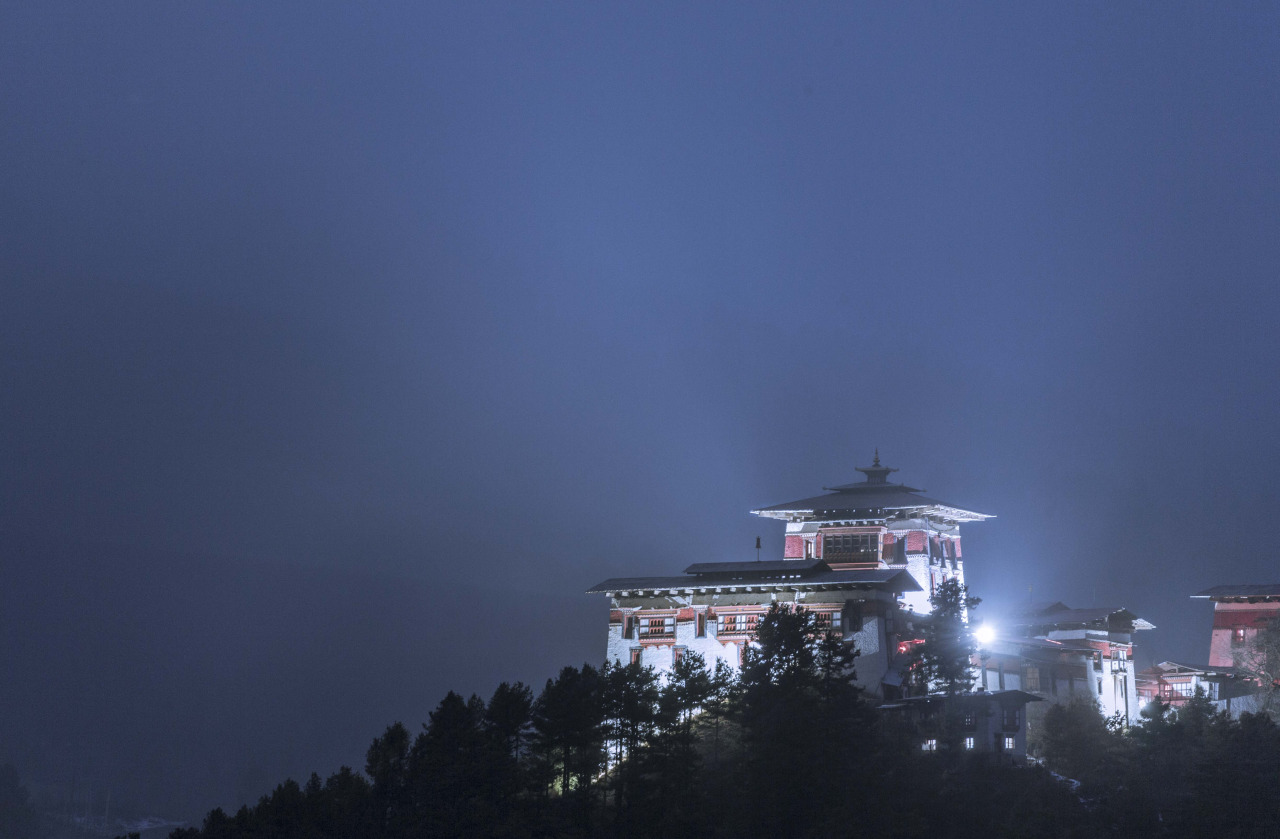 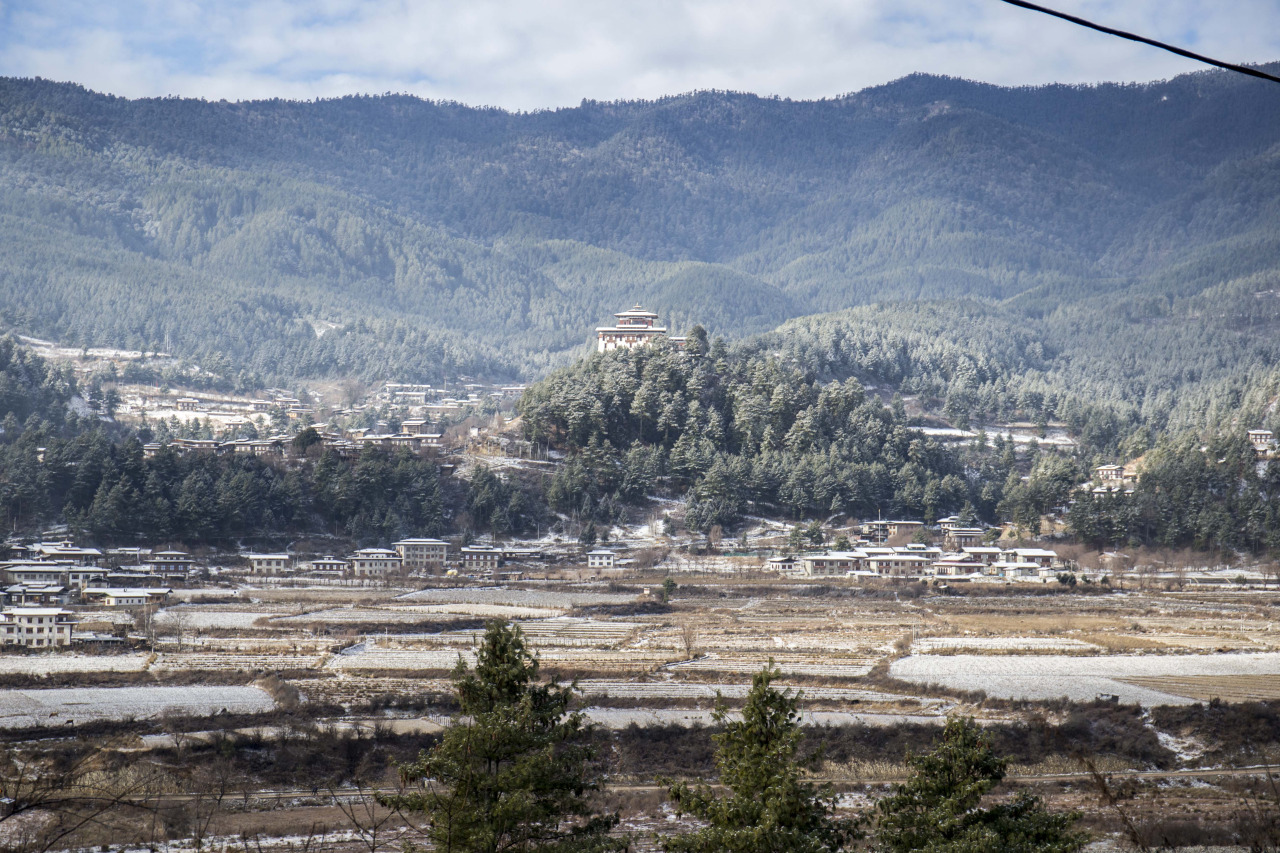 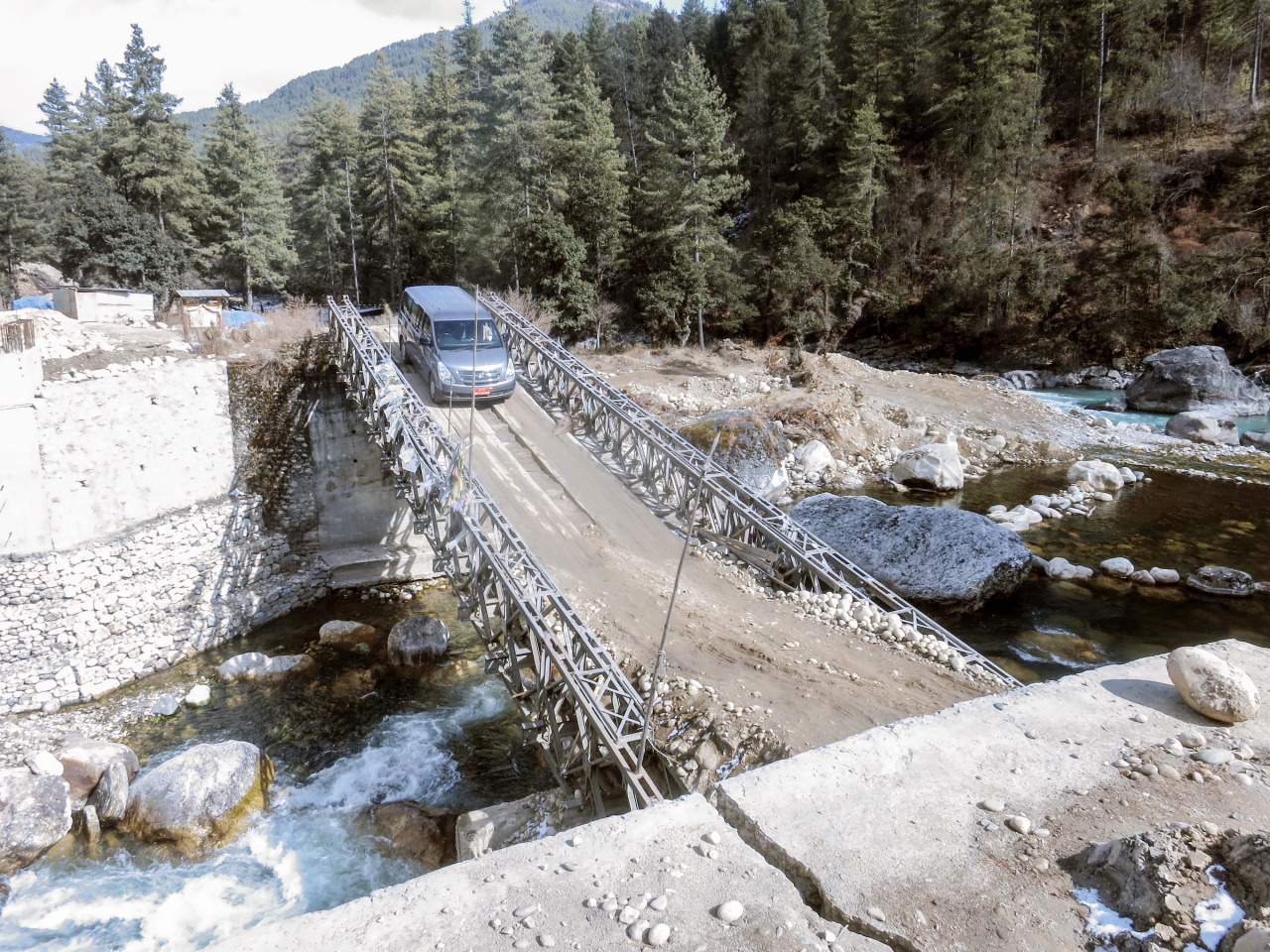 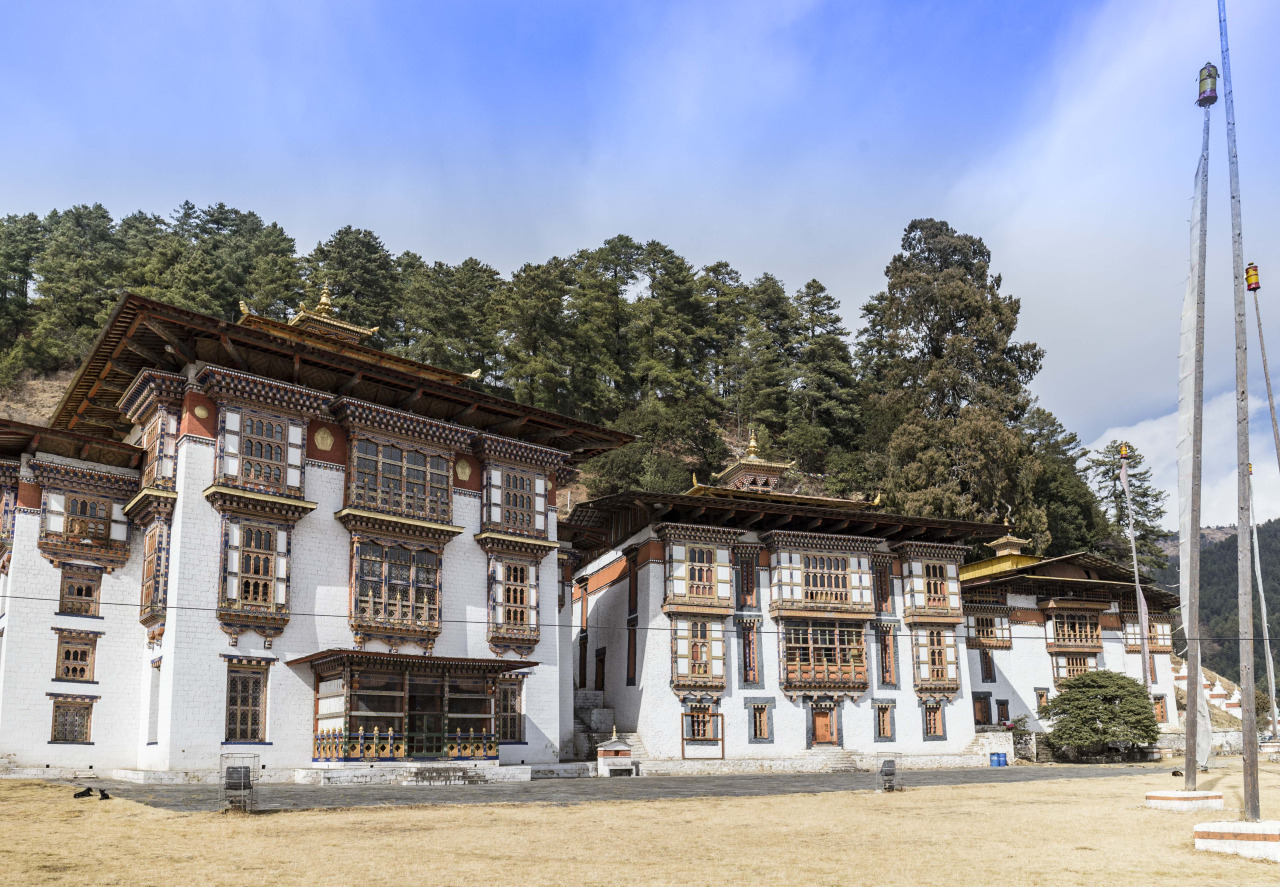 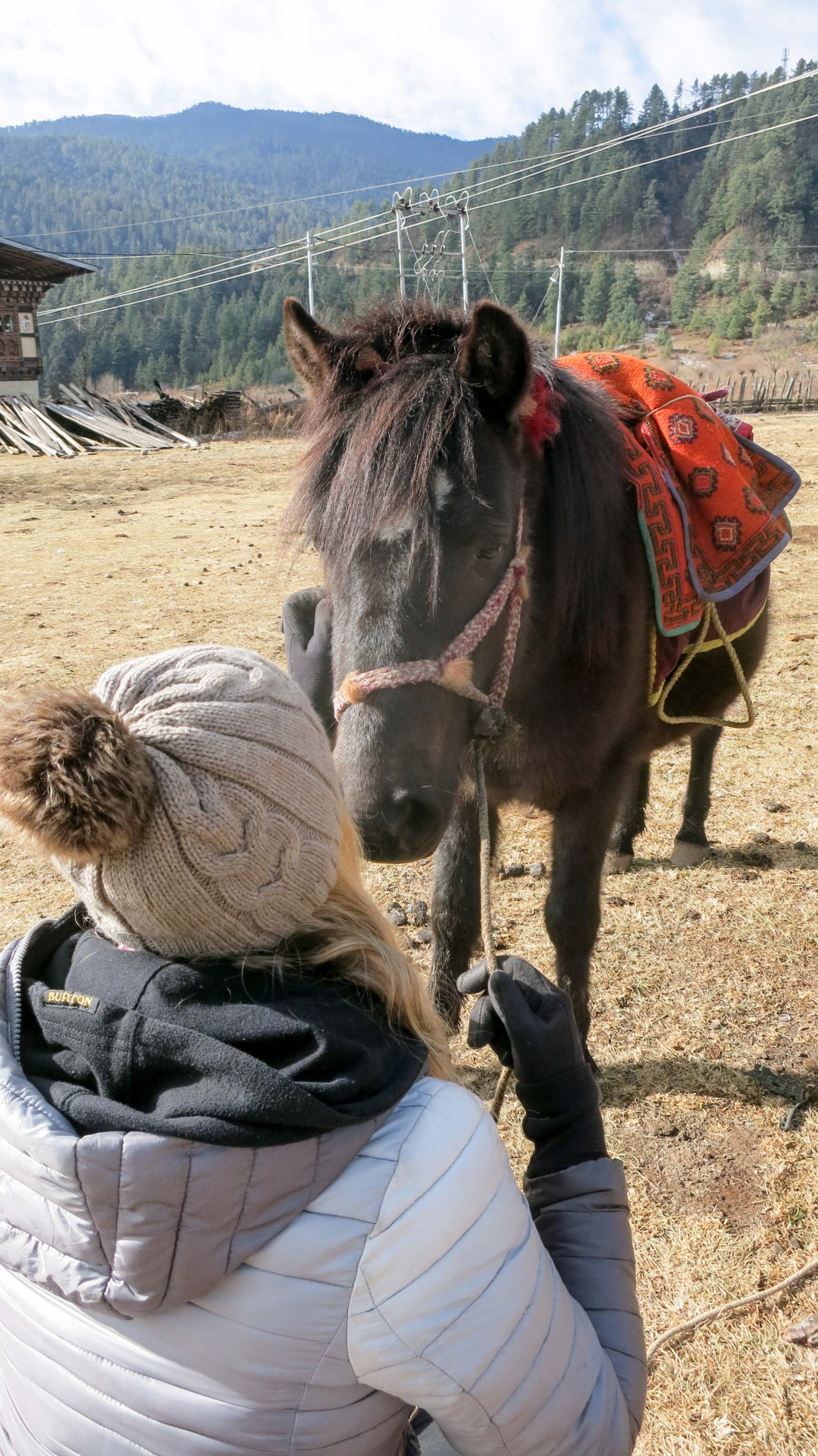 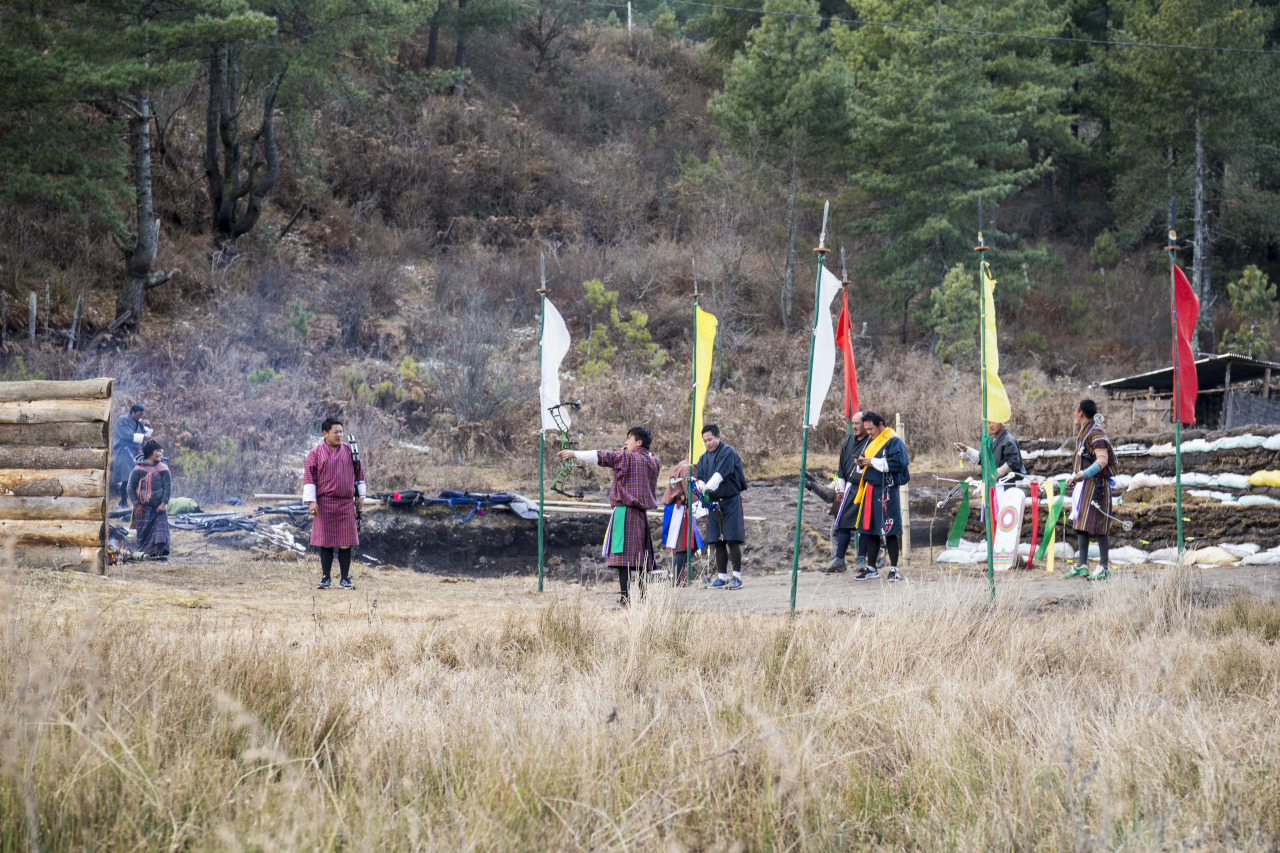 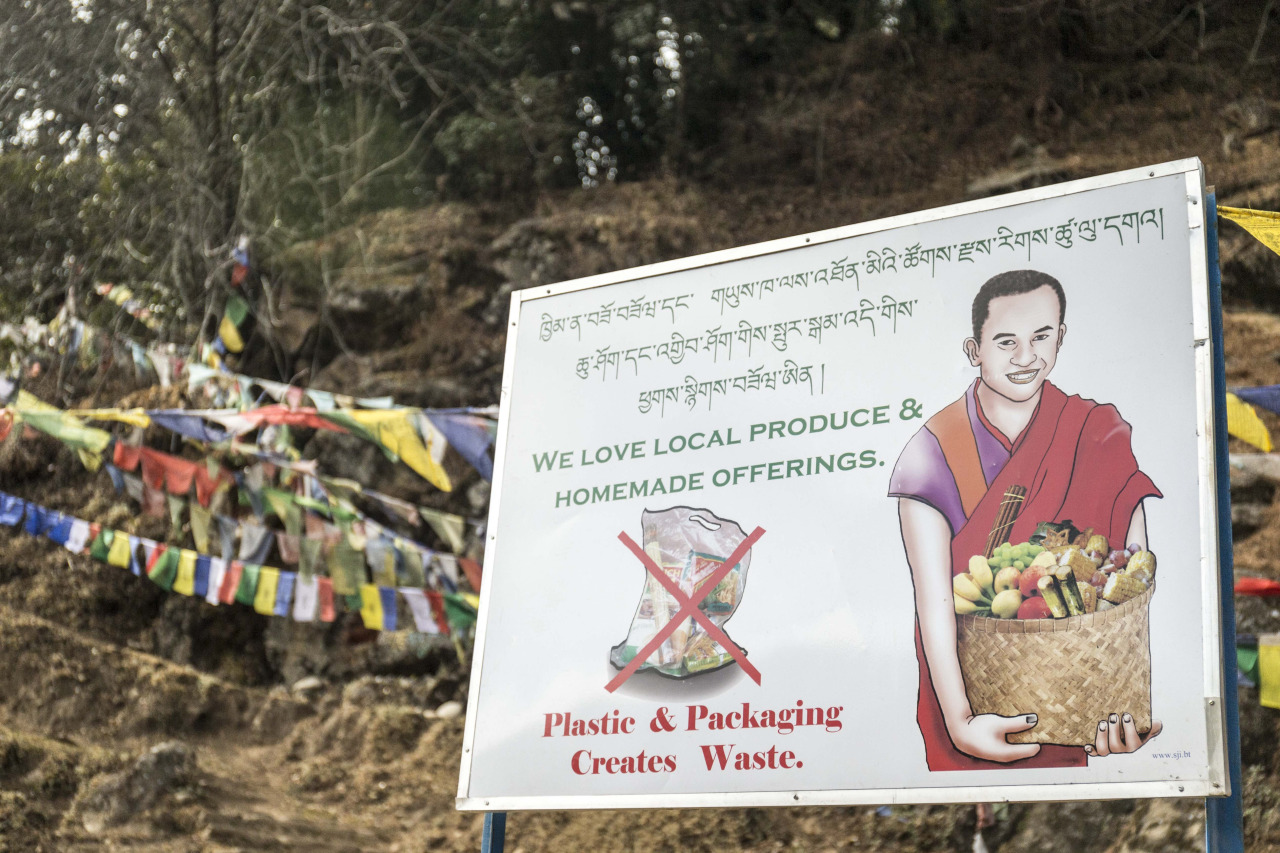 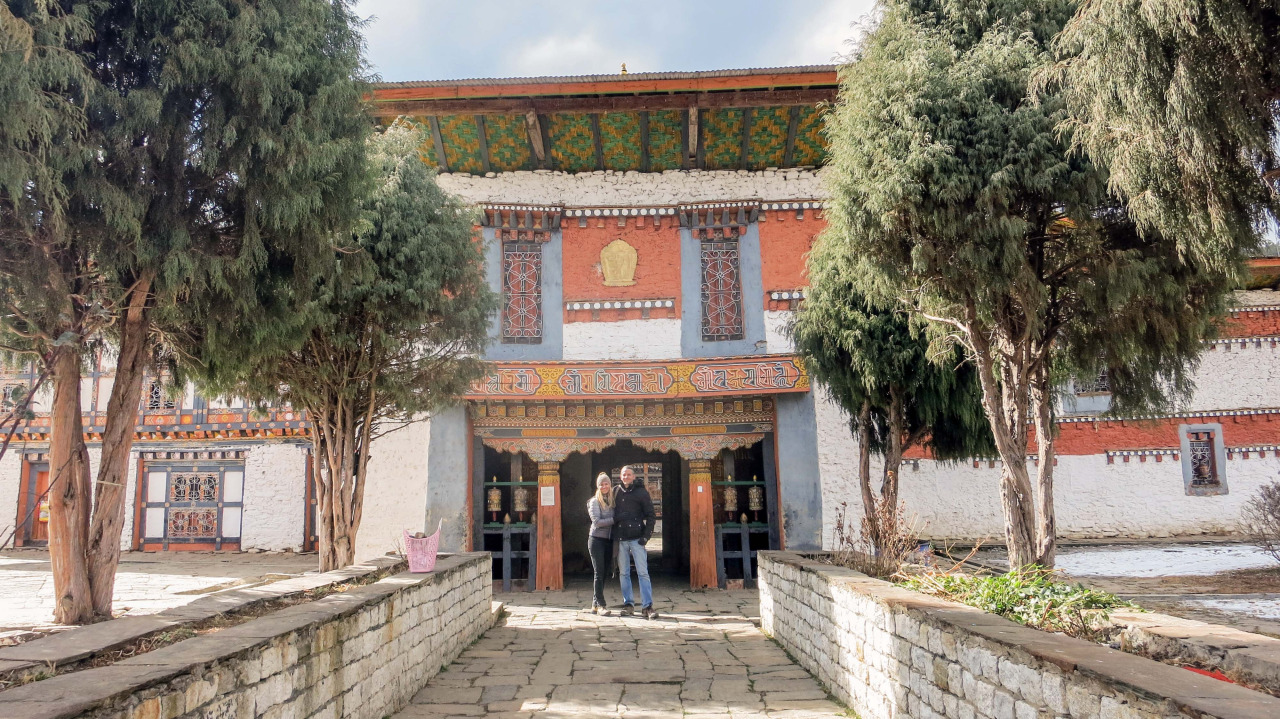 Our accommodation tonight is the Swiss Guest House. Yes it does indeed feel a bit Swiss, with cow bells hanging about and a Jura Espresso machine (Yeah!). As a side note: coffee for Bhutanese inevitably means Nescafé, the old fashioned dry kind, so to get a real cappuccino in Bhutan felt such a luxury.

The Swiss Guest House is a charming ensemble of three houses in a mixed style of Bhutanese traditional construction on the outside and Swiss alpine style on the inside. Lots of pine wood and a wood burning stove in each room. As is had started snowing outside it felt a bit like walking into an overheated ski cabin.

The old house served as the headquarters of the Dairy and Forestry Project in the seventies, with office and residence for the Project Manager. Because in those days, there were quite a few Swiss Nationals working in the project who met frequently at Karsumphe, the actual name “Karsumphe Guesthouse” slowly disappeared and the guests named it just “Swiss Guesthouse”.

The largest Dzong in the region is Jakar Dzong which is beautifully lit at night and so when we retired for the night, cozy warm despite freezing temperatures outside, we were looking forward to visit it after our nice horse ride which we were so much looking forward to.

Waking up the next day we headed out into the cold day. It was beautifully sunny but freezing cold. The light snow fall had dusted everything with a thin coat of white. Bumthang is a broad valley at an altitude of 2800 meters. Bhutanese grow potatoes here and the people raise cattle. A Swiss business man came to live here in the sixties and started a real Swiss cheese factory. Emmentaler was served at breakfast. We also got real apple juice, a nice change after the extremely sweet colourful water that you usually get for breakfast (even though they grow tasty manderines all over the country).

We head out over more dirt roads and funny looking bridges. Many small rivers get crossed by bridges that seem like a steel beam laid across somehow. That one side was about 4 meters higher than the other. Seem to bother nobody. It gets you across, doesn’t it?

Taking a horse ride in Bhutan

In our minds we were riding into the sunny day with all our riding gear on. Helmet, shoes with heel, long underwear, chaps, gloves etc. so you can imagine our surprise when we arrived at the agreed place in a  small village and see two little ponies grazing peacefully with some colourful rugs on them. Two?!?

Wondering where the third horse of the guide was and how we were riding ponies that only had a halter and string attached, we started to realize, that what we had booked as a riding excursion on horseback turned out to be a hand led pony ride on the dirt road to the next village. Shaking our heads laughing we hopped onto the little sturdy things and set out at a very sedate pace. Bhutanese ponies like their Bhutanese masters don’t hurry, they take all the time of the world. The thing on their back was not actually a saddle but some colourful rugs with a wooden frame on it and more rugs on top. Stirrups were made of rope and so short, that we decided to let our legs hang down. When asked those turned out to be trekking ponies and they normally carry about up to 90 kg of load into the mountains in summer time. Winter they just roam free and graze. It took our guide a while to catch two as they were definitely not keen on being put to work on their time off.

While we were led like kids on a carousel at a fair, we enjoyed the pretty scenery. Bhutanese eagles flying above looking for an easy to catch chicken, many people heading out to meet at the archery and darts grounds for a sunny day.

Winter in general seems to be a very quiet time for the farmers. They have lots of time to celebrate and play their favorite sports. Driving back we stopped at one such gathering and watched the men at archery.

They use compound bows now, not the old bamboo ones anymore. The targets are 145 meters away and they play in two teams. The first team who reaches 22 points wins. In each round every archer has two arrows and points are scored hitting the tiny target on the other side. And it is indeed tiny. Only about 15% of the arrows hit the target  and when it does the entire team is chanting and dancing in a circle. It looks like an Indian war dance and chant. Then they drink some Arra and beer and off to the next round. They seem to have a blast. The women are there to watch, prepare the food and make fun of the opposing team to distract them.

The temples of Bumthang

After a very delicious lunch we went onto our culture afternoon. First on the program is Kurjey Lhakhang, a tempel complex of three separate temples, each built at different times. The oldest in 1652, the second in 1900, the third in 1984. Each one has a different story on how they came to be on this place. There are so many stories in the Buddhist religion, that it’s impossible to even try to understand and retain them. Interestingly enough, everywhere people are asked to not litter, leave trash or clean up after themselves. Those signs can be seen at temples or in small villages everywhere. One of the reasons is that plastic was only introduced recently to Bhutan and as they were not used to non bio degradable packaging before they threw everything plastic out like regular trash. It took a mind shift to change that (and thousand of signs everywhere).

We then headed out to an even older religious site: the Jampey Lhakhang, a monastery founded in 659 by a Tibetan king. It is truly ancient and you can see that it has been painted over hundreds of times. Inside is (as so often) Buddha in his three stages (past, present and future). This temple is special as it has three stone steps before you enter the inner sanctum: one step being level with the floor representing the present. one step you can’t see as it has sunken into the ground, representing the past and one golden step above the present to symbolize the future.

Firmly rooted in the present, our stomachs were telling us it was time to head back to our Swiss Guest house for some late afternoon tea and biscuits.