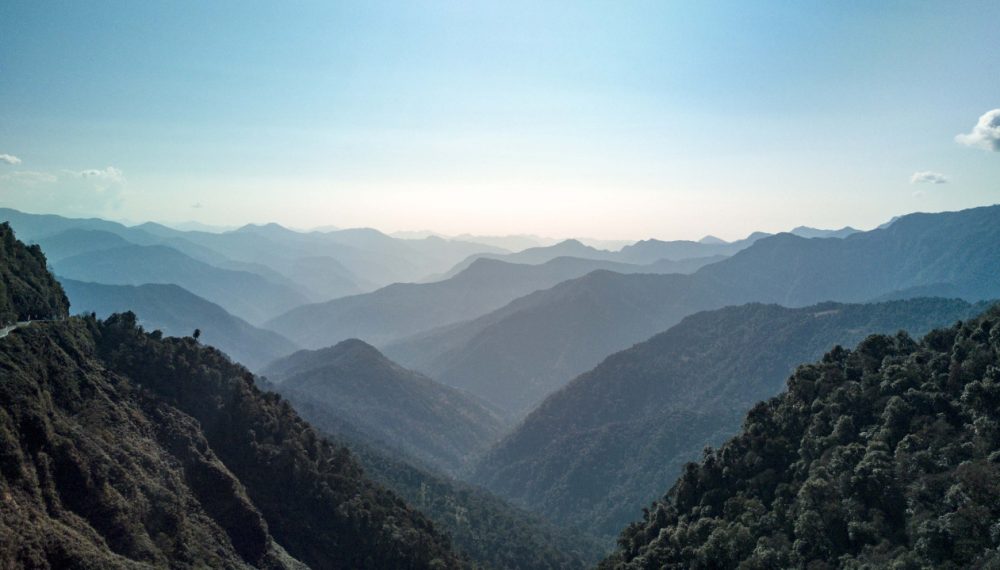 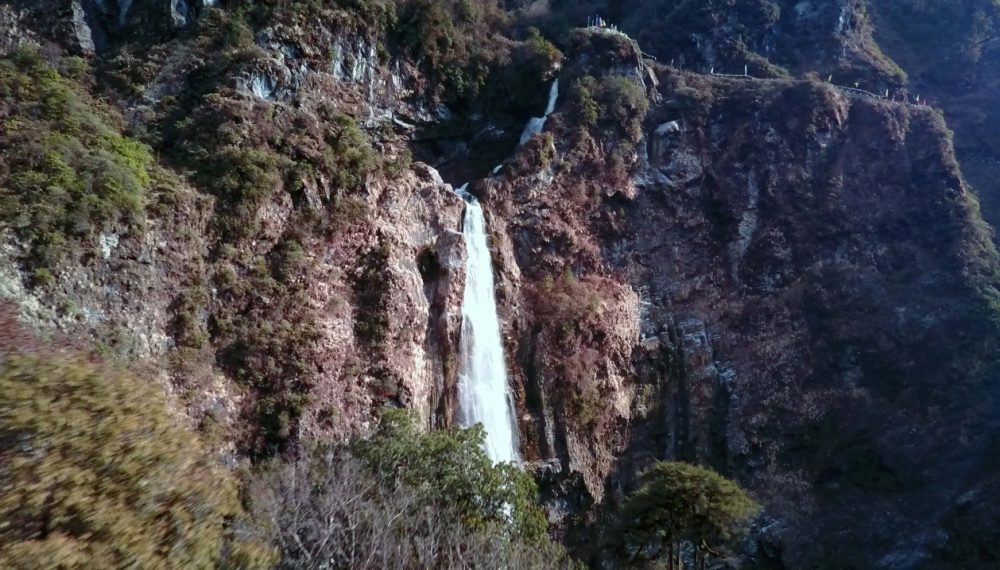 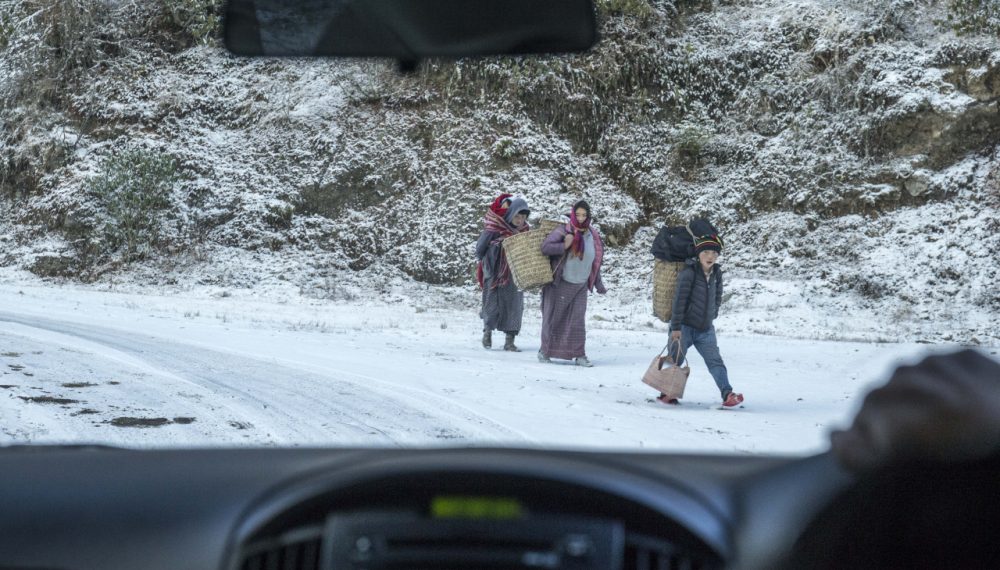 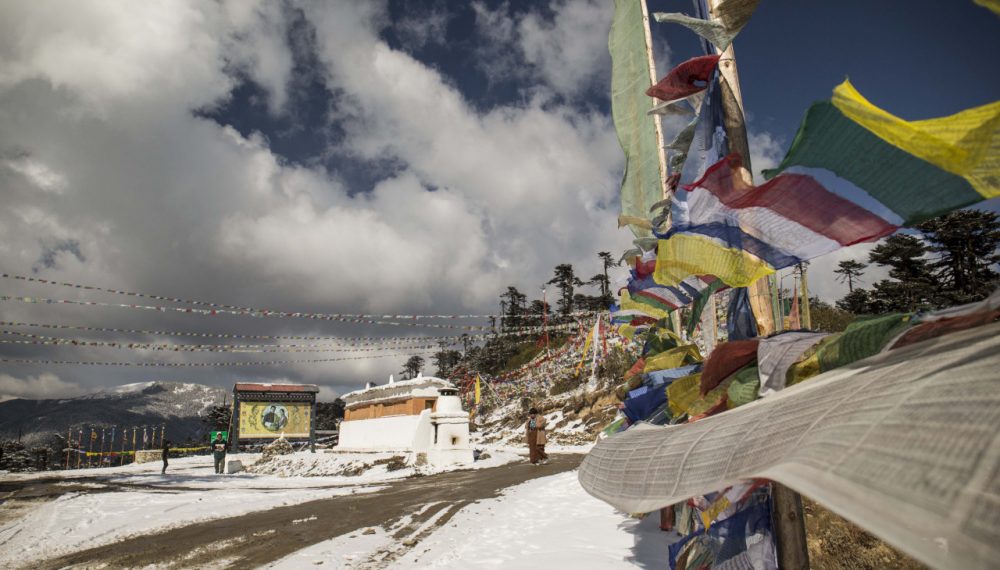 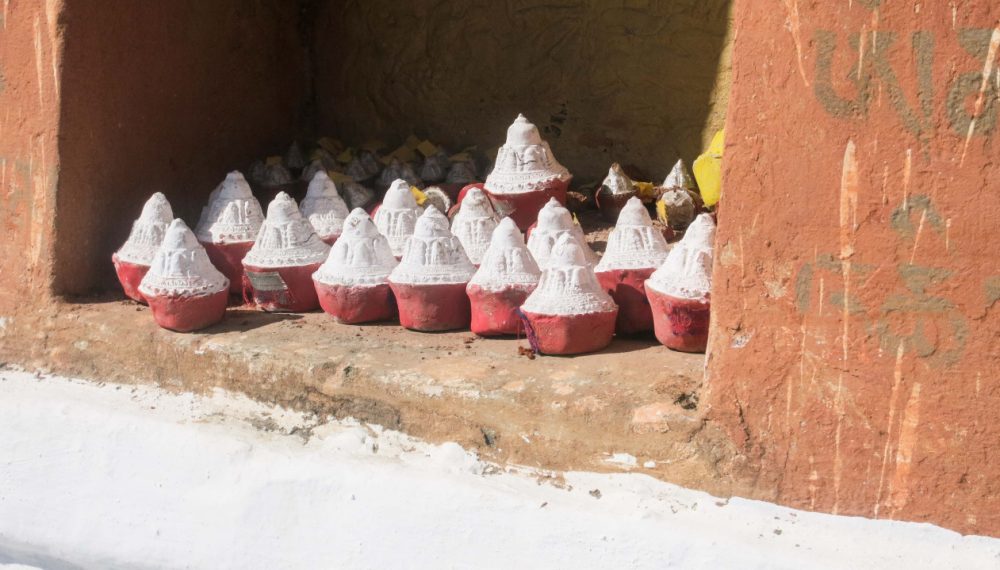 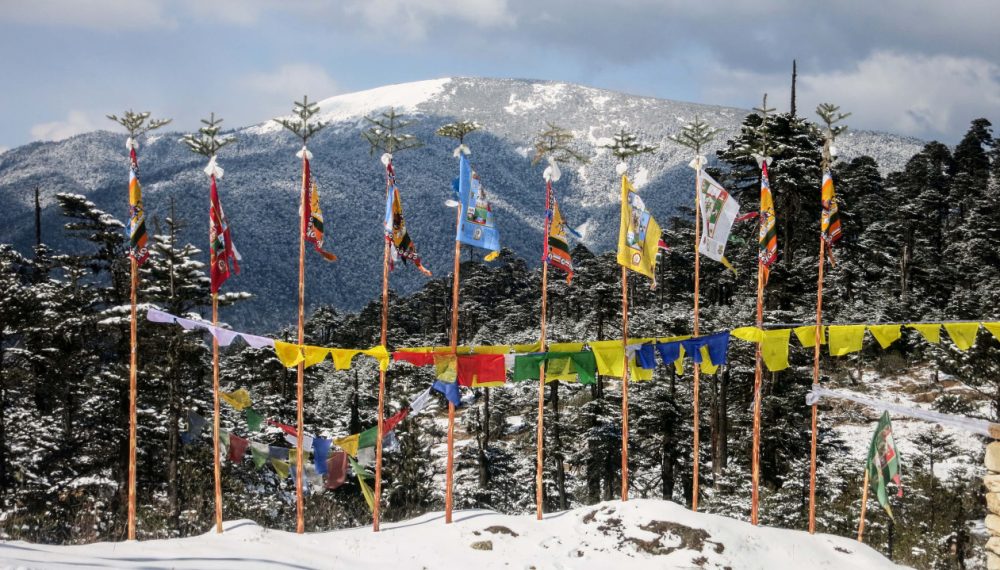 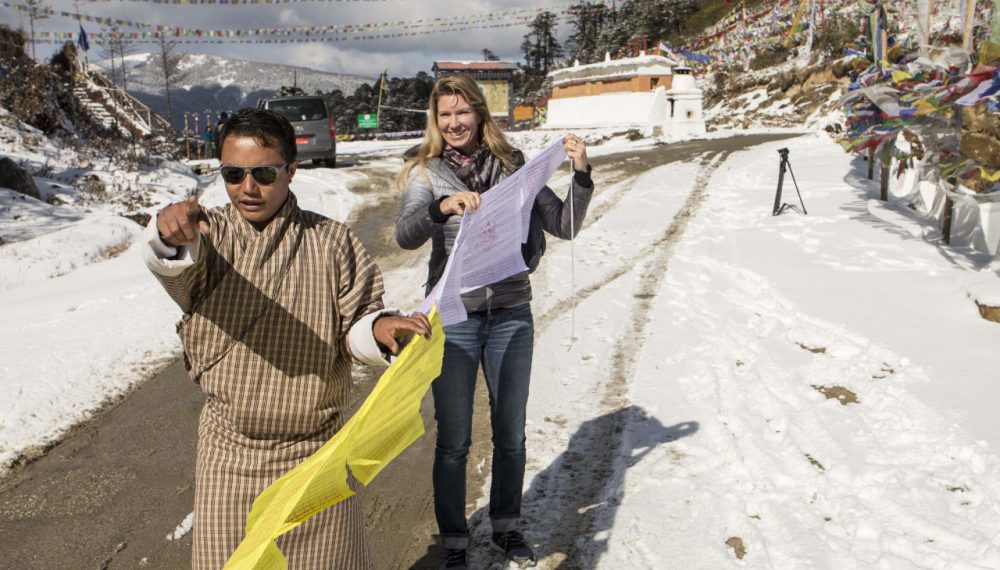 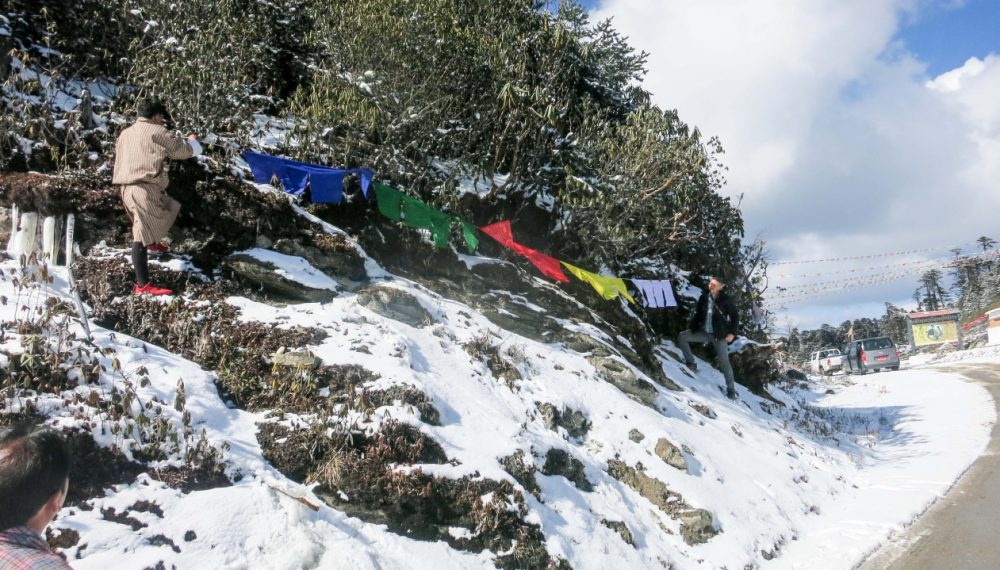 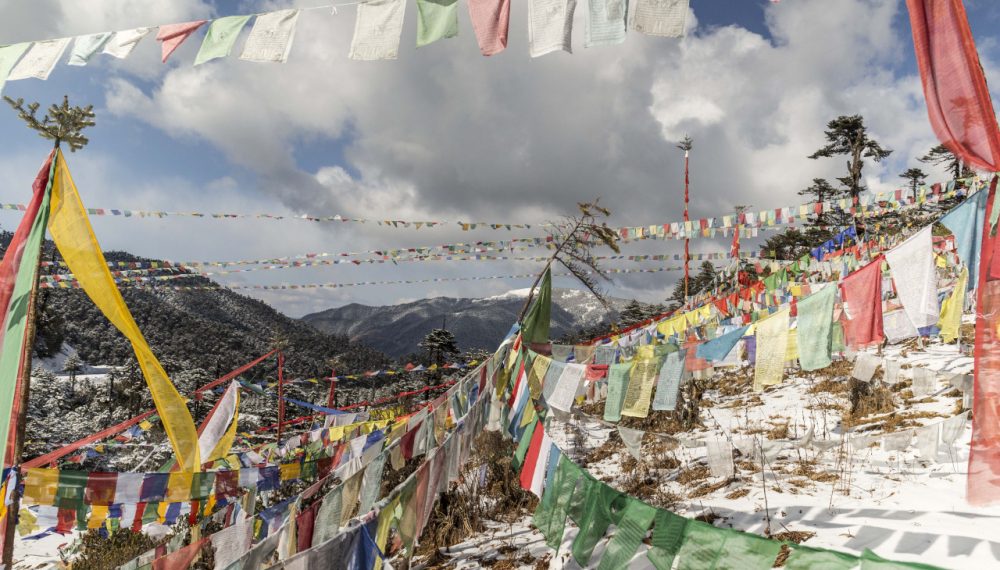 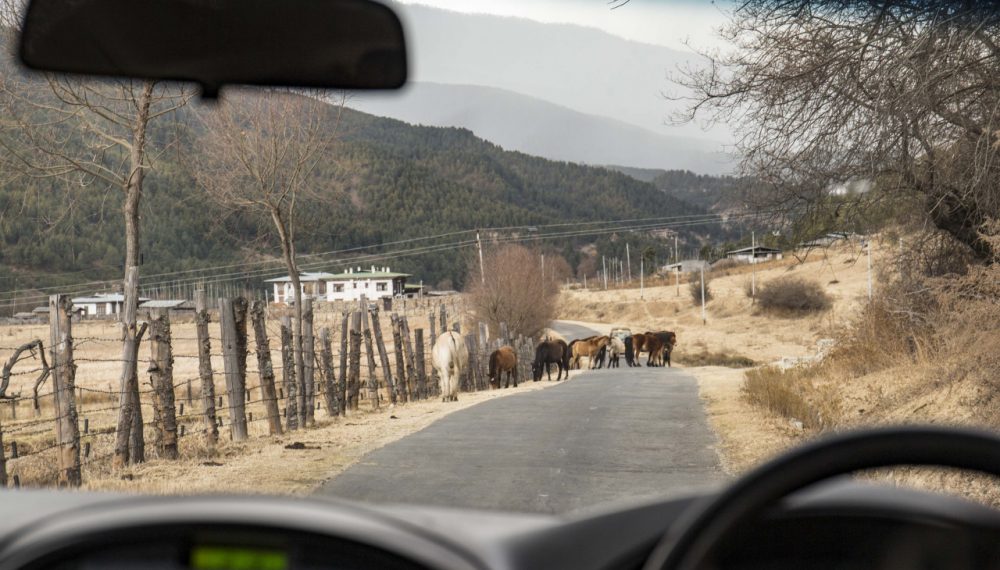 Off we went the next morning from Sengor to Bumthang. The mountain panorama along this stretch of road was fantastic. We would have loved to just stop on the road side with a large cup of coffee and just look into the distance. So much unspoiled landscape seems like a luxury nowadays.

The narrow winding road takes us ever higher into the mountains until we stop at the largest waterfall in Eastern Bhutan. The Namling waterfall plunges about 80 meters down below the road. Little shrines and stupas are above it in memoriam of the 300 Indian and Nepali workers who died constructing this bit of road that is literally hacked into a steep rock cliff.

Driving on this next leg meant we had to cross the second highest mountain pass of Bhutan. The Trumshingla with 3780 meters altitude. We had gotten word that it has snowed on the pass and looking at our 2 wheel drive Minivan, we were quite sceptical. Icy, snow covered roads with a  steep climb up and down a high mountain pass with no guard rails anywhere and often only a single lane with oncoming traffic did not sound like a great mix. Especially coming from a country that requires winter tires as on November despite no snow having fallen at all…. Mentally Esther saw us already sliding over a steep mountain cliff. Our store bought prayer flag would certainly come handy – if only we made it to the pass where we planned to hang it…

And suddenly there is … snow

Driving up over 1500 meters, we started to see the first snow on the ground. It was only a dusting, and luckily not a solid road cover. Not many cars were on the road, we found out why. Fun fact: in Butan the first day it snows is declared an instant holiday in those regions, and the people stop working and start celebrating. Quite amusing to us westerners, until you understand that Bhutanese take any excuse to celebrate ;o).

Passing a family on the snowy road they did not seem to mind the snow at all carrying on in clothes that any of us mortals would freeze in. We started to realize that we were getting closer to the pass when the entire road side got lined with colourful prayer flags. The closer we got, the more flags were hung up. Some faded and tattered, others in brand new neon colours. Hanging in places where one wonders how they got there without a helicopter. Bhutanese belief is that the higher a prayer flag hangs, the closer it is to the divine spirit, the more blessings it brings.

Prayer flags as a security feature

On the very top it was really like an insane spider web of strings that crisscrossed the entire area of the pass. We stopped to hang our flag in as high a place as we could find, Chris and Norbu risk slipping down and bruised knees. Our prayer wish certainly contained that on the drive down, please don’t let the brakes fail, don’t let the road be icy, don’t let us get too close to the edge of the cliffs… and so on… It was a lot of wishes for a small flag.

While at the top, we had a look around and rather than a traditional stupa, this pass had a long stupa wall ( which pretty much serves the same purpose). In that wall we noticed  little red/white clay things that were standing along a rim in the stupa wall. When asked, Norbu said that those were called tsatsa and were indeed a mixture of clay and ashes of deceased people, so they would remain as a reminder for the families and be close to the skies to facilitate an easier next step in their journey, as all Bhutanese are cremated. Quite a touching concept, rather than burying the loved ones in the ground.

Luckily our prayer flag did work and we made it safe and sound down the pass on the other side. Right before we arrived at our Swiss guest house lodge a little herd of adorable ponies strolled in front of our car and brought us to mind that the next day we had booked a nice horse ride in the snow.