From the mountains to the flat lands – Day 8 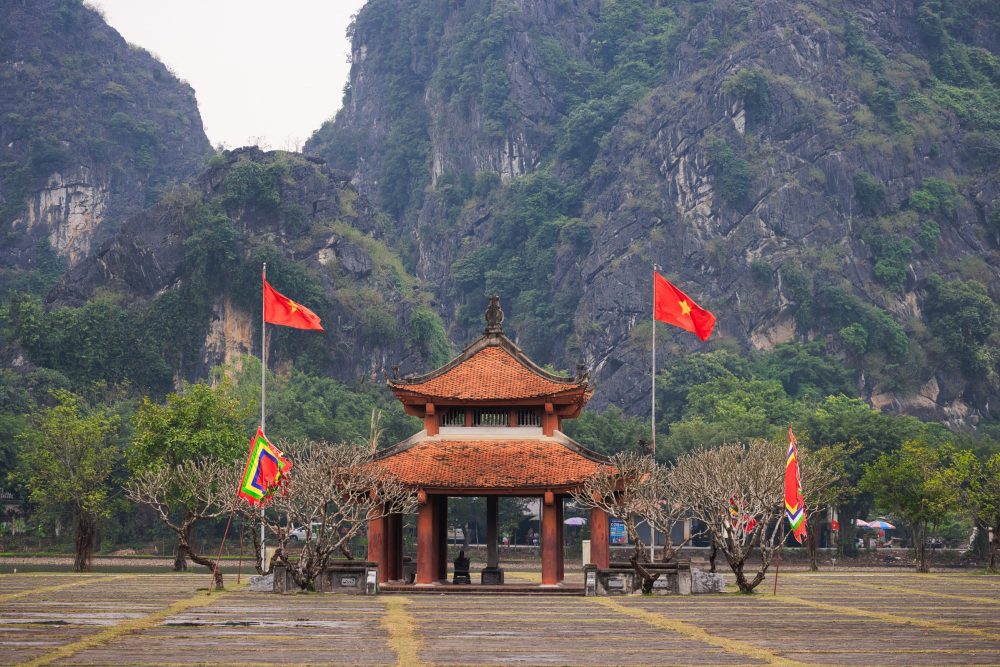 Today we said good bye to Pù Luông Reserve and the mountains. We did not do as much hiking as we would have liked, but nobody was keen to get drenched with all the rain pouring down. If the weather does not change Chris is getting the weather blues as the grey uniform sky and the drab light makes it impossible for him to take good pictures which is bad for business.

According to the weather forecast we still have two more such day in front of us. Let’s hope it gets better than forecast. Today is mostly a driving day from Pù Luông reserve to Tam Cốc, a little township in the state of Ninh Bình, south of Hà Nội or Hanoi and half way to Hạ Long Bay.

When leaving Pù Luông mountains we drove by an astounding piece of craftsmanship and asked to stop and see it close up. It turns out the structures we had seen from the road were three gigantic waterwheels made 100% from bamboo.

Not a single nail or metal thing in them. We walked up to one of them and got to see how they worked.

Tied to the wheel are bamboo tubes in just the right length and tilted exactly so that they take water when submerged into each bamboo tube and dispose of the water on top of the wheel into a larger Bamboo tube that is then connected to a series of connected bamboo pipes, transporting the water in an open aqueduct like bamboo structure to the rice fields.

The pedals that drive the rotation are also made from Bamboo, but those approximately eight meters high wheels need to be constantly maintained and all bamboo parts are swapped out after two years, if they even last that long.

On we went as we had quite a drive in front of us that day. Driving down from the mountains onto the flatlands, we saw the agriculture work and fields changing. Whereas in the highlands the fields were mostly rice terraces and worked on with water buffalos or small hand held tractor like machines, down in the flat lands we saw more big tractors and other crops such as corn, sugar cane or cassava (also known as manioc).

Water buffalos can still be seen in many places here but while they still are used for farm work in steep areas, down in the flat lands they seem to be more for eating or buffalo fights rather than doing much field work.
After our lunch (Goat and quail for Chris, vegetables and rice for Esther) that wasn’t one of the best we had, we walked to a boat quay to board our Sampan for a tour through the largest wetland reserve in Vietnam.

Van Long Nature Reserve is home to countless types of water birds and carpets full of blossoming pink water lilies. It consists of vast areas of slow flowing water, reed forests and karst rock formations that are typical for Northern Vietnam. small canals have been kept open for the small sampan boats to be rowed through.

The water is shallow, only about one meter deep, and the sampans are flat bottomed bamboo boats lined with concrete on the inside. They can take only two passengers each as well as one rower. This area is also the last refuge of the most endangered species of primates called the Delacour’s Langurs. Once abundant in Northern Vietnam, those primates have been hunted by the locals to near extinction. Van Long reserve with the karst rock formations that provide the Langur’s home, protected by water is the last refuge of those monkeys. Only about 120 of them still live in the wild. We weren’t lucky enough to spot one in the dense forest that covered the rocks.

Nevertheless we saw some birds that we could not identify, while being rowed calmly through the countryside. Without another boat in sight it felt very remote and peaceful even though Chris was nearly despairing with the fuzzy light and the overcast sky.
90 minutes later, back at the quay, we were treated to an Italian Coffee there, well what they called an Italian coffee, that at least had some real milk in it. While drinking it, we noticed another one of those signs, that take a western word and simply spell it the Vietnamese way. That way Café becomes Ca Phé and auto becomes ô Tô.

In general we observed that there is no Vietnamese word longer than six letters. So they must chop words that we combine in German into multiple shorter words. It makes for sentences with very many words in them and you always need a context to understand the right meaning of the word. And then there is the pronounciation… you think you pronounce it the right way and still all the Vietnamese around you are bursting out laughing when they hear you say something like “cảm ơn rất nhiều” (Kamm uuhn dset nhoui) for “thank you very much”.

On we went to our last stop before the day was over. During the 17th century the Dinh dynasty was ruling Northern Vietnam and the kings made Hoa Lư their capital until it became too small and they moved it to Hanoi. Hoa Lư is surrounded by protective hills but has limited space to grow.

All what’s left of the dynasties remains are two temples that are nearly identical in layout but do have subtle differences. Bot have fish ponds inside their walls, both have a three tiered set up (first gate, second gate and then the temple). But they are dedicated to different people.

The second temple is dedicated to his successor, a general, the monarch Lê Đại Hành, who married the widow queen. Both temples were nicer to look at from the outside than the inside which was quite sinister . We even saw a fabled creature called a kỳ lân or Qilin, a type of Chinese / Vietnamese Unicorn.

And what would a Vietnam visit be without riding a real water buffalo? Of course Esther can’t resist to sit on any rideable four legged animal, and so she didn’t need to much convincing to hop onto a buffalo at the temples just for fun and a photo op.

On that hilarious note we finished our day, drove another 40 minutes and checked into our lovely hotel in Tam Cốc.