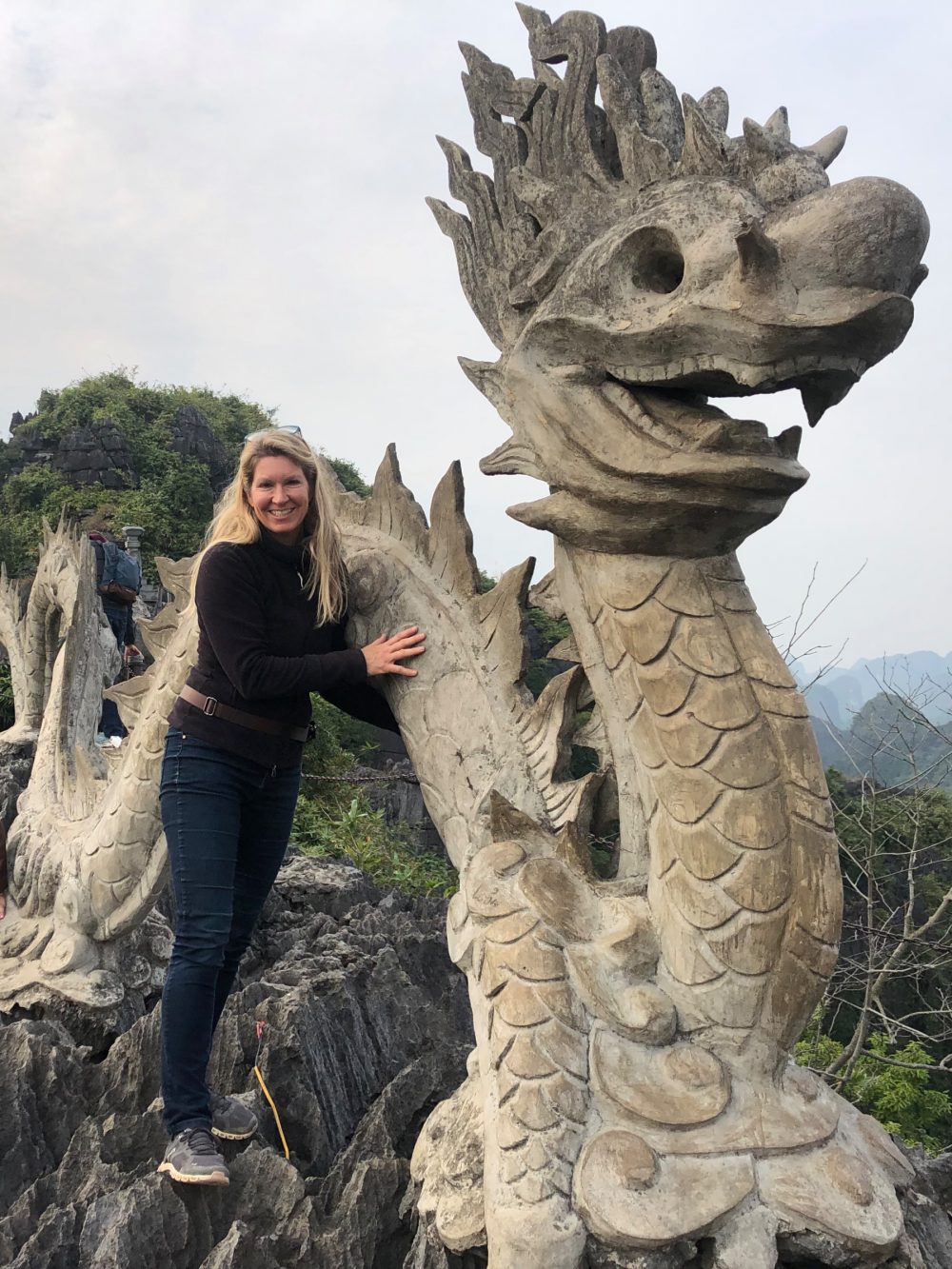 Esther finally gets to meet her dragon

We are staying two days in a lovely hotel in Tam Cốc, the best on our trip so far. Le Clos du Fil is a boutique hotel in cooperation with a women’s embroidery initiative. The make lovely hand crafted and embroidered things like bags, table cloths, napkins and many more things.

Everything in the hotel room reminds us of it, from embroidered air condition covers, Toilet roll covers, water bottle covers to an embroidered angel on our panoramic window so that birds don’t crash into it. The bathroom amenity kit holder is embroidered as well as the bath robes, towels and bed linens. All with loving detail. The breakfast is fantastic as was our dinner there last night.

Today is our day of the dragon as Esther calls it. She has seen a dragon sculpture on a mountain top that looked very cute and that’s what’s on the plan for today. But first we enjoyed our fantastic breakfast buffet. Fresh fruit, fresh juices, fresh cooked eggs to order, fresh Pho Bo or Pho ga, all sorts of hot local foods, even croissants and very good yoghurt.

We feel we are stuffing ourselves at every meal. Luckily today we are doing some exercise. We picked out some push bikes and headed out of town by bicycle. We got an early start as Tam said day tourists arrive around ten from Hanoi. First we cycled along country roads when we had an unplanned stop at a fish farm that had just brought in their first catch of the day. All sorts of carp and tilapia were in the basin swimming around with the local customers taking their pick from the wiggling fish.
Cycling further we soon arrived at Bích động Pagoda, a buddhist temple, actually three of them.

We were the first visitors there today and everything was empty besides a few locals trying to sell you incense, which we bought for good luck. Crossing a small adorable arched bridge we entered the temple grounds through a pagoda like entrance gate.

Walking up the hill a bit, we saw the first and largest one of the three pagodas. Bích động Pagoda was built in 1428 under the reign of Le Thai To following the ‘three’ Han scripts of three unconnected temples.

The lower one called “Ha” has a beautiful stone dragon in front of an otherwise unassuming building (dragon number one). Many golden buddha statues were inside depicting buddha in different stages of his life. From the three buddhas representing past, present and future to the little boy buddha to buddha being the only one connecting heaven and earth together. The rest of the temple was quite simple.

Up a flight of 100 stone stairs one enters a little shelf of a cave mound into which temple number two, called “Trung” was built into. It had a main building that was smaller than the temple below and to it’s left an even smaller matrimonial temple.

One had to cross through a cave behind the second temple to get to a steep flight of stairs to the third temple called “Thuong”. It’s the smallest of the three and has again little buddha statues inside. One has a great view from above, but cannot be seen from below. It is as if all three pagodas are invisible from below.

It is a privilege to have the place to ourselves as the buildings are small the the stairs steep and narrow. Not great for masses of tourists. The temple is a big attraction for Asian instagrammers, but only the little bridge in the front with the gate in the background.

Our second stop for today is another boat trip on the Ngô Đồng river. Again we were the only tourists and it was very relaxing to be rowed in a small boat through the quiet waters of the river. Pink water lilies were blooming everywhere, occasionally birds would be flying up, king fishers, white cranes, a bird of prey that we could not decipher.

Our rower was a lady who actually used her legs to row instead of the arms. It looked quite weird and uncomfortable but we actually glided quite fast on the river.

Three times we went through caves by boat. Two of them were quite short, but we needed a flash light to cross nevertheless. The third cave was huge and at least a kilometer long.

Pitch black and with the ceiling less than two feet above our heads it felt quite strange. Luckily our rowing lady had a powerful flash light and she pointed out glittering stone formations that grew from the ceiling to us. It looked like silicate that formed low hanging sparkling stalactites over the millennia and they sparkle as light hits them. We explored all three caves on our way.

Back on the bikes we made our way to Tam Cốc again for a (not so) light lunch. Before handing back the bikes. We decided to take a nap at the hotel before heading out to Múa cave and viewpoint by car.
Arrived at the Múa cave area, were were amazed at the number of tourists there and the many costume shops renting authentic local dresses, that people and especially instagrammers love to pose in when atop the mountain.

The Múa cave is nothing spectacular and rather disappointing but the viewpoint on top of the hill is spectacular.

Having to climb up 499 stairs to the top is a challenge for a lot of people attempting the climb. Huffing and puffing, resting often and with unsuitable footwear they make it barely to the top. For us mountain goats – no problem. there are two peaks, one with a small shrine and one with a little pagoda tower on top. We went for the shrine first with a lady buddha watching over the land. The attraction though is not the statue or the view it’s the stone dragon (dragon number 2) that is set atop the ridge leading from a nearby peak to the shrine. That’s the dragon that Esther has been waiting for.

Surprisingly small yet several meters high and about 30 meters long, it looks like it’s hopping on top of the mountain ridge. It looks really cute. And lots of people found the same. To get a picture alone with the dragon proved to be impossible. Well one can’t always have no tourists…
Chris took advantage of five other drones flying to blend in with them flying his own and getting a few good shots from above. Luckily the sun has made it through the cloud cover and the light was a bit better. His mood had improved by now….

They had even brought their own photographer with them. Other tourists became impatient as they were hogging the sole spot in front. Makes you wonder what they will be doing in a few years time, when instagram or TikTok are no longer the cool thing to do….
Once down at the bottom again we wandered around the compound. Every ten meters there was an instagram posing spot.

We saw countless swings, Heart shapes, LOVE signs, buddha statues, little bridges and yes also a once colorful dragon (dragon number 3) which by now has really seen better times. Nobody paid any attention to it, except Chris who tried to wrestle it.

On our way out we could not resist to use one insta spot ourselves, especially as we won’t have the opportunity to ride any horses in Vietnam. We hopped on some stone horses as the best alternative and shot our own Insta blog picture….

Back at the hotel we allowed us the luxury of a full body massage which made us wan to go to sleep straight away if it were not for the french fusion dinner we were promised. Unfortunately ‘Chez Loan’ proved to be rather disappointing. No fusion and just an average Vietnamese meal and so we went home as soon as we were done eating. Dragon day came to an end and we finally saw some sun today.