DAY12: boldly go, where no one seems to be going… 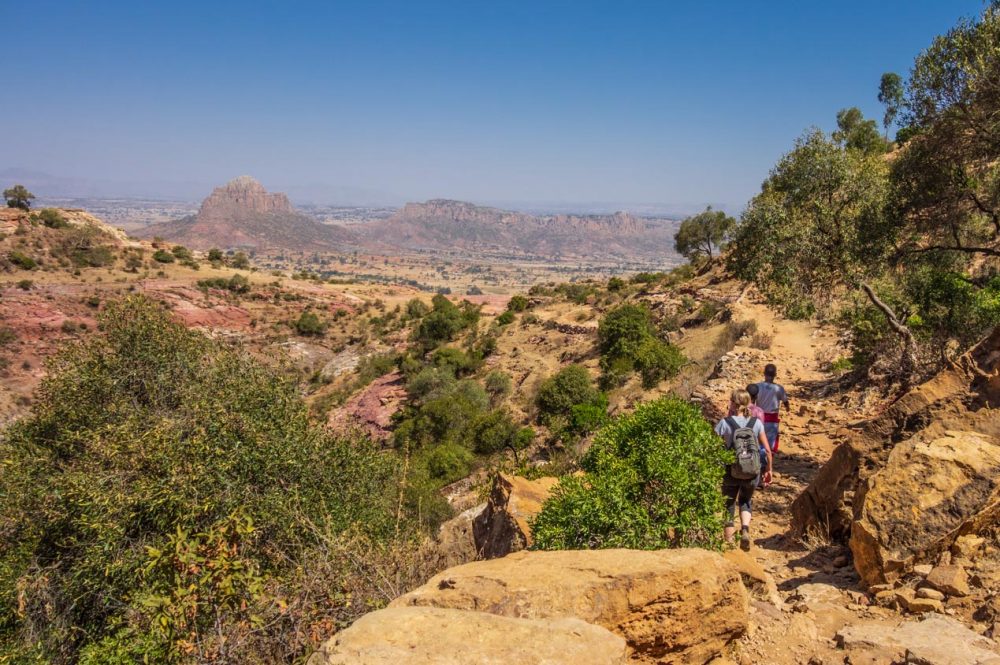 We had been so looking forward to have a long sleep in on a Sunday morning in our beautiful Gheralta Lodge when we were woken up at two AM by chanting monks again. Arrgh!

It was Sunday and while the next church was about two miles away, the sound of chanting in the silent night travels very far and clear. Needless to say that sleeping in was off the menu…

Nevertheless we had a very nice breakfast in the lodge, could update our blog with some better internet than usual and headed out on our first hike only at 9.30 AM in beautiful sunshine and about 24 degrees.

Our guide had never visited that particular rock church, and so we could only go by what the guide book told us. We found the start of the trail easy enough. According to the book it was supposed to be an hour walk up to a high plateau and did not say anything about the terrain itself.

So we started walking uphill, joined by two uninvited pseudo guides that were trying to negotiate their way into our small group and of course at the end of it get paid as well. The guide book said it was the most remote of the churches, and indeed we were the only ones there.

The hike started pleasantly enough, meandering through the shrubs and up the mountain, but dragged on and on in the sun.  Up and up we went for nearly two hours, Chris was ready to throw in the towel after about one hour of rapid heart beat and out of breath state due to the high altitude.

The path could only be guessed as there were no markings whatsoever. Finally we arrived at the plateau and one of the guys following us had called the local priest who is in charge of the masses and baptism that are happening in the Church as well as opening the church to visitors (and charging them for it).

Through a small rock passage and with bare feet we entered this seemingly small church. It is carved entirely into the rock, complete with pillars, two entry doorways (one for women, one for men) and even a few window openings were hewn into the rock. It always amazes us how much work this must have been and who oversaw the static and architectural elements of it several hundreds of years ago.

The paintings were very similar to the ones we had already seen  (Mary`s travels to Egypt with baby Jesus,  St.George defeating the dragon, 12 apostles, and this one had the holy Johannes, as he helped Mary to escape and also escaped himself onto this hill top by magically flying up there with a winged snake.

Here he then built this church which was never destroyed or ransacked even during the time that the Jewish queen Judith who tried to eradicate the Christian orthodox church and install Judaism instead.

Again the views from the top were great and when asked if we wanted a different way down, faster than the way up we accepted and our adopted guide earned his money by showing us a more direct path down. So in the end both additions to our team proved to be very useful, one having gotten the priest to unlock the church and the other by leading the way up and then down the mountain. All in all it took us three hours, double the time we had planned.

Chris then flatly refused to do one more step up a hill even if the next church was only a flight of some 100 stairs. He stayed in the car napping while Esther and our guide went up to see Abraha we Atsbeha.

This church was founded and excavated by two brothers of the said name, supposedly around 335 AD, but a British archaeologist dated it more around the 10th century. The mummified bodies of the two brothers are still kept in the church in the section Holy of Holiest. The Church has 13 large pillars that support a high roof of stone. Each church has three areas: the singing / chanting / reception type area, like an entry chamber, then the praying section and then the Holy of Holiest. This section is always veiled with curtains and only the priest can go there. The Tabots are kept there too.

In the  Abraha we Atsbeha church, the first welcoming chamber is made with regular bricks, but the second and third sections have been hewn into the rock completely. It measures 16 x13 meters and is at least 6\six meters high inside. A fire and some water dripping through the rock ceiling have unfortunately destroyed some of the art work. The remaining art work is much more elaborate than at most of the other churches we have seen so far. They were painted with much more detail and accuracy, which can be seen in the people’s faces and their horses.

Enough churches for a few days, back at the car we had to wake up Chris and drive to Wukro, our lunch destination over some dirt roads where serious road work was going on. It looked like Ethiopia wanted to build a next highway here and our road was a curious mix between four lane wide freshly graded dirt road sections and one lane wooden bridges in between. Luckily the traffic is still so light here that those one lane bottleneck bridges don‘t matter much.

After our very good lunch in Wukro, where Chris ate goat for the first time here in Ethiopia, we simply drove to our next overnight destination, the regions capital Mekelle, an industrial town which Chris refused to take a picture of due to it’s dinginess …

… but for documentational reasons he finally took a shot to show you how Mekelle looks like in the early morning hours.