DAY4: Timkat – a bath in the crowd 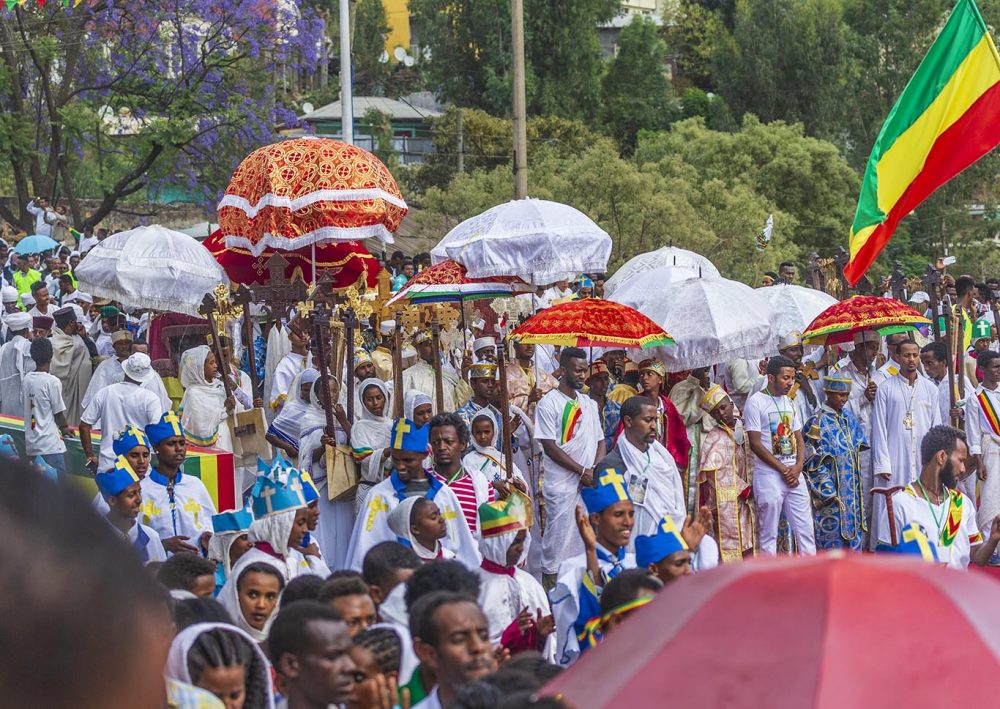 Today we had another early start, around 8 AM to drive to Gorgora to yet another one of the very old monasteries of Ethiopia. Debre Sina Maryam was founded by a local priest who eventually succeeded in converting the Ethiopian king to Christianity.

Located on the Northern shore of Lake Tana with a beautiful view over the lake, this old church is way off the beaten track. Nevertheless, here as well, we had to hire a local guide. Circular on the outside and square on the inside, it follows many other churches of its age.

Apparently first founded in the 14th century, it grew to be of significant importance only for a few decades. Once the converted king died, all the action moved back to Gonder.

We watched an old lady make traditional Ethiopian sour dough bread called injera. It is made from a local grown seed named Teff. We haven‘t seen it in Europe but we are sure we will, as it’s gluten free and that‘s the new rage right now.

It is the base of many of the dishes here and varies in sourness. It is made of fermented , liquid dough and cooked on a hot metal plate the size of a very large Pizza. After about 5 minutes being covered with a lid, it takes on a spongey look and feel and gets taken off the hot plate. It also serves as a serving plate as dishes get piled up on top of it. Food is eaten with your fingers of your right hand. Most dishes are quite spicy but very savoury.

After visiting Debre Sina Maryam, we were supposed to take a boat to a small island with yet another monastery on it to visit. We were getting quite ‘churched out‘ by now so we were not too unhappy when the captain did not show up and so we decided to have tea and coffee at a most remote campground, called Tim & Kim. Tim and Kim are a Dutch couple who decided to build a campground with six huts and several camping spaces on top of a beautiful knoll overlooking Lake Tana. The road is not sign posted and it takes a rocky dirt road ride to get there. It’s a very serene spot and had the best amenities we have seen in Ethiopia by far yet.

We met a swedish couple, Emil and Fanny who were camping there and had a long trek behind them as well as in front of them. They made their way from Europe to Egypt where they picked up their car called ‘Wandelux’. From there they then drove through Sudan into Ethiopia. They will be on the road for a total of six months intending to travel through Rwanda, Uganda, Tanzania, Kenya and South Africa. Quite a feat. We parted with our last bag of German Haribo which made their eyes sparkle with delight. You can follow their Instagram account here: wandelux.overland

We headed back to Gonder, as the Timkat festival was supposed to start that afternoon. For that they closed off the roads and we had to walk back the last two miles to our hotel. After a quick lunch and leaving all our valuables and mobile phones there (since we have been warned that there are pickpockets in the crowd) and we walked towards the parade grounds where a big procession was gathering.

Timkat is the biggest religious celebration. It’s called Epiphany, the baptism of Christ in the river Jordan and one of the three big religious festivities here in Ethiopia. The two others being Christmas and their new year (in September) Ethiopia follows a different calendar and is about eight years behind our calendar.

Timkat at Gonder is special. While other cities and their monasteries also have big Timkat celebrations, Gonder is the only one where the believers jump into a moat surrounding Fasilidas’ Castle to re-enact the baptism of Jesus in blessed water. But that was to be the day after.

Today the eight major monasteries of Gonder put together procession wagons, singers and dance groups and made their way slowly through town to Fasilidas’ Pool and castle, now used for ceremonial purposes only. Each group had in their midst a cloth wrapped ‚tabot‘, prayer tablets, (supposedly replicas of the Ark of the Covenant) that get taken out of each church only for special occasions. Each tabot is carried by a priest under a tabernacle. The dancing and music is quite unique and it’s impossible to even guess what words they are using. There is a lot of repetition and chanting going on.

Men usually wear walking sticks with either one bend at the end or a T-shaped end that represents the ram’s horns. They tap the stick onto the ground in rhythm with each other and their dance moves while chanting. Traditional dress is white with either Ethiopian flag colors (yellow, green and red) or Gonder colors (white and red). Long dresses for women and long shirts and trousers for men.

There was a throng of people accompanying the procession and waiting on the side of the road. Clapping and chanting. Everyone seemed to have a blast of a time.

The destination for the procession is Fasilidas’ Castle and pool, which is in fact a moat. 363 days the moat is empty, only the day of the procession and on Timkat itself it gets filled with water about 4 feet deep.

The entire procession and all the spectators piled into the sacred ground around the monastery and in no time the entire compound was filling up with people. It was near impossible to move anywhere. Chris of course being in his element and hunting with the camera found plenty of photo ops and while Esther was ‘parked’ at the moats wall with a good view, Chris zig zagged across the sea of people and took shots. The first he learned was ‘can I take a picture?’ in Amharic ‘foto mansat intschilalo?’ which mostly results in a nod and smile.

The procession arrived at Fasidilas castle and with much incense smell, ceremony and singing, the eight tabots were gathered under their tabernacles onto a small bridge leading to the castle and then carried to safety to spend the night enclosed by ancient walls and water.

Once the tabots had disappeared into their safe place, we went home by foot as it was impossible to drive through those roads full of thousands of people. We saw very few tourists and the ones we saw were always in groups. Safety in numbers… We feel the need to point out, that we didn’t have any safety issues whatsoever so far.

We had a very early night as we had to get up at 2.15 AM (yes that‘s correct AM) the next day for the re-enactement of the baptism.