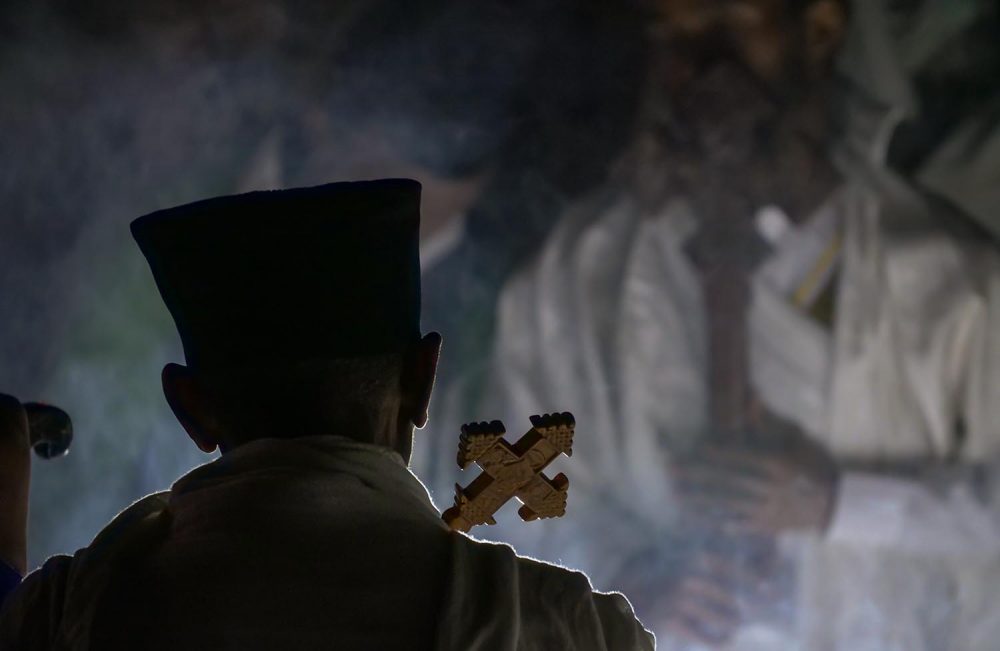 Today is the most spectacular day of Timkat at Gonder. The re-enactment of the baptism of Jesus. The whole night already the chanting and music continued so we did not get much sleep. We had to get up at 2.15 AM bundle into our warmest clothes, as Gonder is 2.400m above sea level and quite chilly at night. Together with a few other tourists we were driven to Fasilide’s pool to pick the best seats early.

Already ceremonies were going on and locals started to arrive with us at the same time, taking choice spots around the moat and on wooden bleachers built for the occasion. Of course Chris couldn’t stay put while the picture opportunities were happening all around, so he started to venture out.

It got bitterly cold after a while and Esther was glad to have brought a fleece blanket from the hotel. Many other wished they had too.  There was nothing much to see yet.

While the sky was still pitch black, the castle and pool were illuminated by colorful light garlands and the candles of the believers. More and more people poured into the walled compound through three entry points. Thousands and thousands of people. It felt like a sea of people clothed fully in white.

From Chris perspective who was moving around, the place was coming alive. While some believers still slept snuggled in colorful blankets all over the enclosed premises of Fasilide’s pool, others were chanting prayers reading from their Amharic bibles only illuminated by candles.

At one corner of the pool some priests gathered to perform the baptism of three babies, obviously a special privilege for those involved in the ceremony.

Finally at the crack of dawn the priests had obviously all said their prayers and blessed the water of the pool. In rows three deep hundreds of believers in their ceremonial gowns were lining the sides of the pool chanting and moving in tune.

The crowd outside the walled pool got noticeably impatient and started to chant their own chants to be let in for the jump into the holy water. The police and orderlys had their hands full trying to contain the masses from storming the inner wall of the pool.

With batons and sticks they had to discourage over eager young men from entering the inner pool area. The atmosphere was charged with anticipation. So much that it became too much for some tourists who left early. Young men around the pool started to shed their clothes and got ready to jump into the water in their briefs. Waiting for the signal to be the first to jump in, others outside the wall sensed that the action was about to begin. The push and rush towards the pool got quite scary.

Several tourists had to be rescued from the outer side of the wall to the inner side otherwise they would have been squashed by the pushing people.

In the midst of that chaos, Chris even had to take a break from taking pictures to rescue a boy, who was very afraid of all that action around. He lifted him onto the wall so he could see and was no longer being pushed.

The stands, which were full of tourists to start with, were climbed from the outside by dozens of locals wanting to get a better view too.

More tourists left in a haste, especially as holy water was sprayed with hoses into the crowds. Collective yelping from all sides. Then all hell broke loose.

The first believers jumped shouting and yelling into the pool followed by hundreds and for sure over one thousand young men from all sides now. It looked like some line had snapped and walls were climbed as the entrances were too small to withstand the pressure of so many people.

It makes one realize what power and potential those single minded crowds can have. We were just glad that this was for a positive cause and did not turn negative in any way.

After we each independently finally managed to make our way outside the compound, we found each other through text messages on a street corner and shared a TukTuk, crowded with six people inside, back to the hotel for a bit of a rest.

In the early afternoon we were invited to watch the homecoming of the procession in reverse order back to it‘s starting point, a great open place called Meskel Square. The office of our local travel agency had a balcony overlooking the square and we had traditional coffee and bread there, watching the procession arrive slowly.

We decided to have a lazy rest of day as Chris needed to get on top of his hundreds of pictures he took that day and we were hoping that we could upload some to the blog as well.

Dinner was at one of the premier restaurants here called Three Sisters and it served all the local variety of meat and vegetables and local beers. Certainly a spot to recommend when in town.