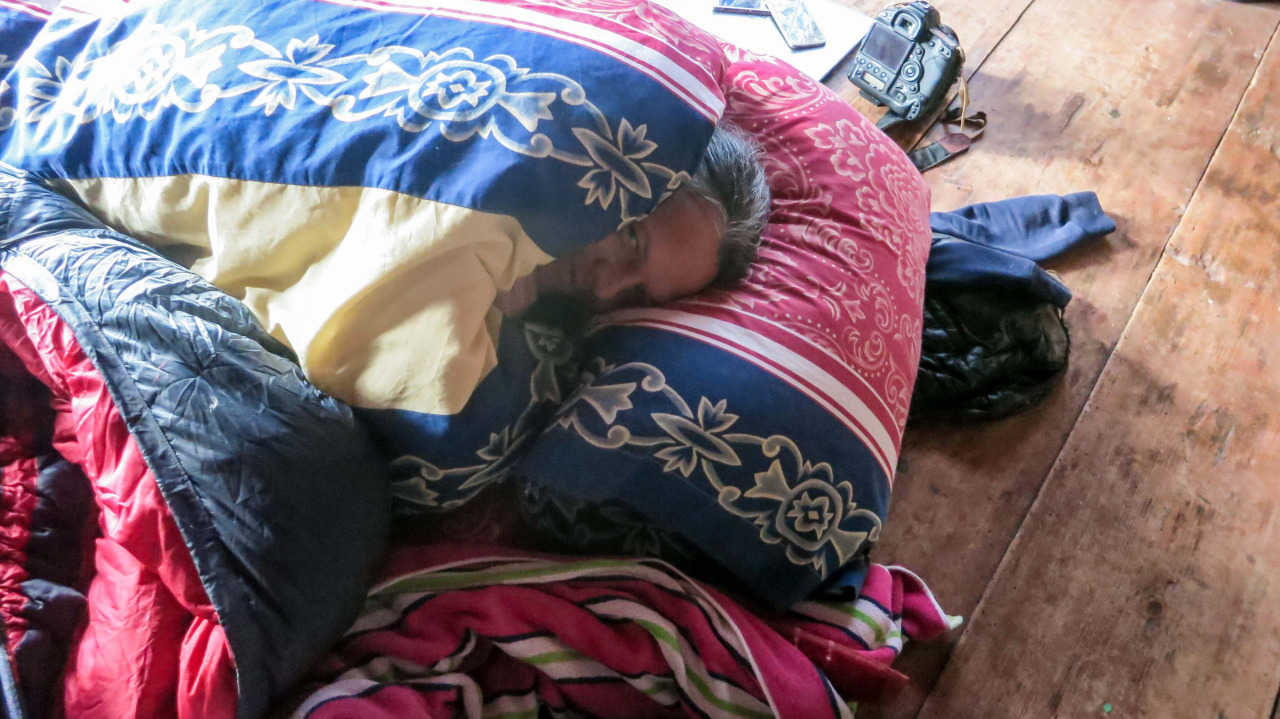 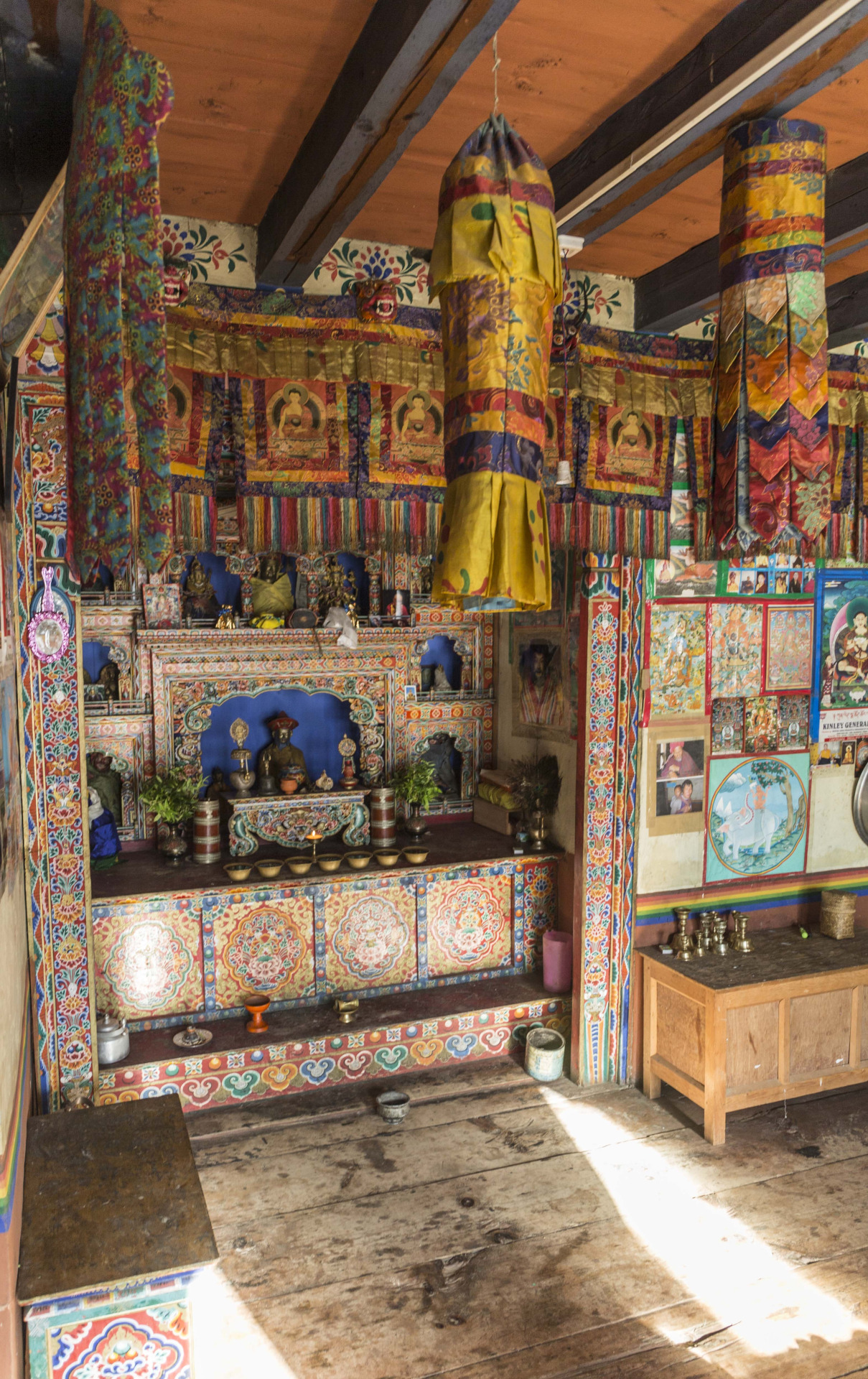 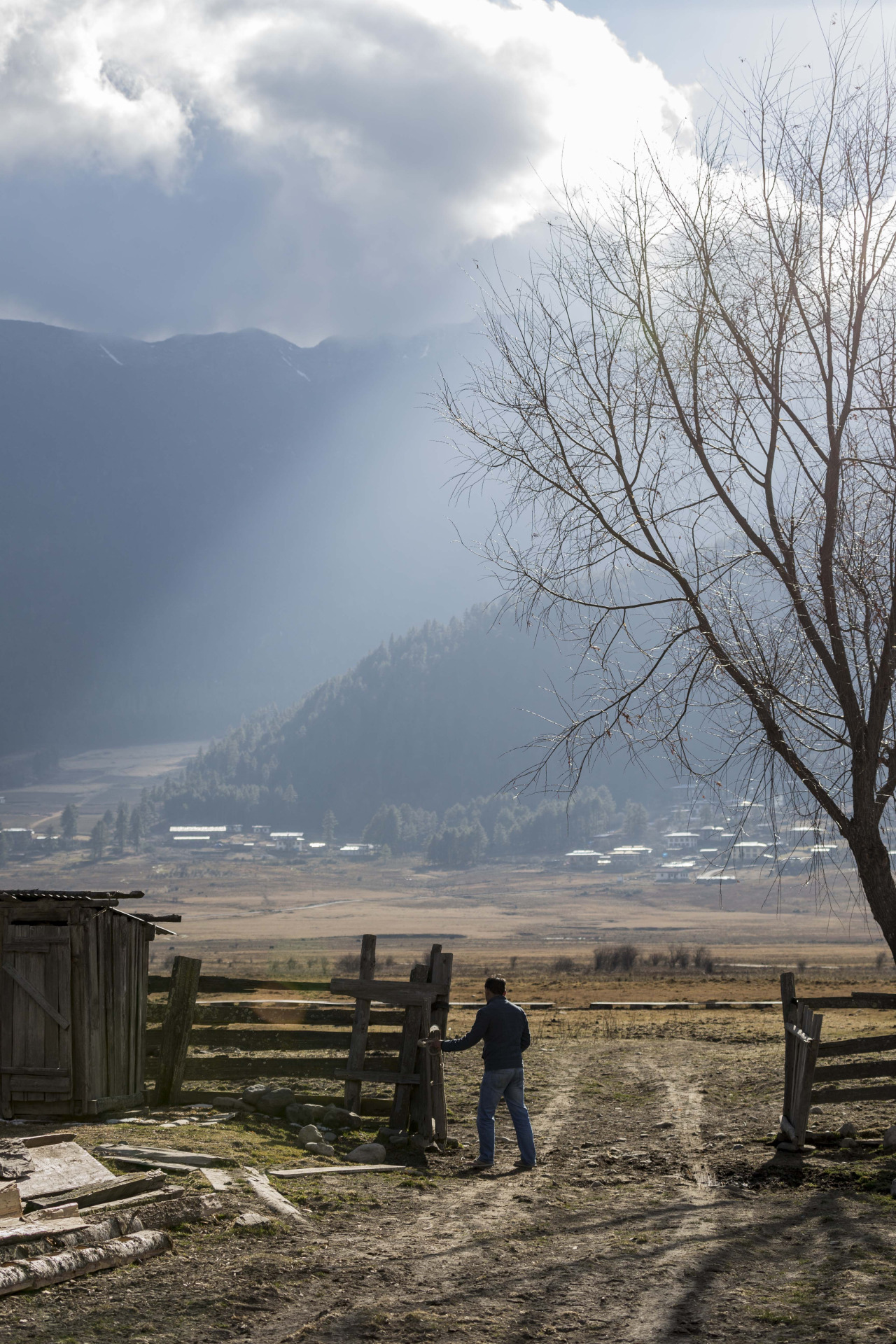 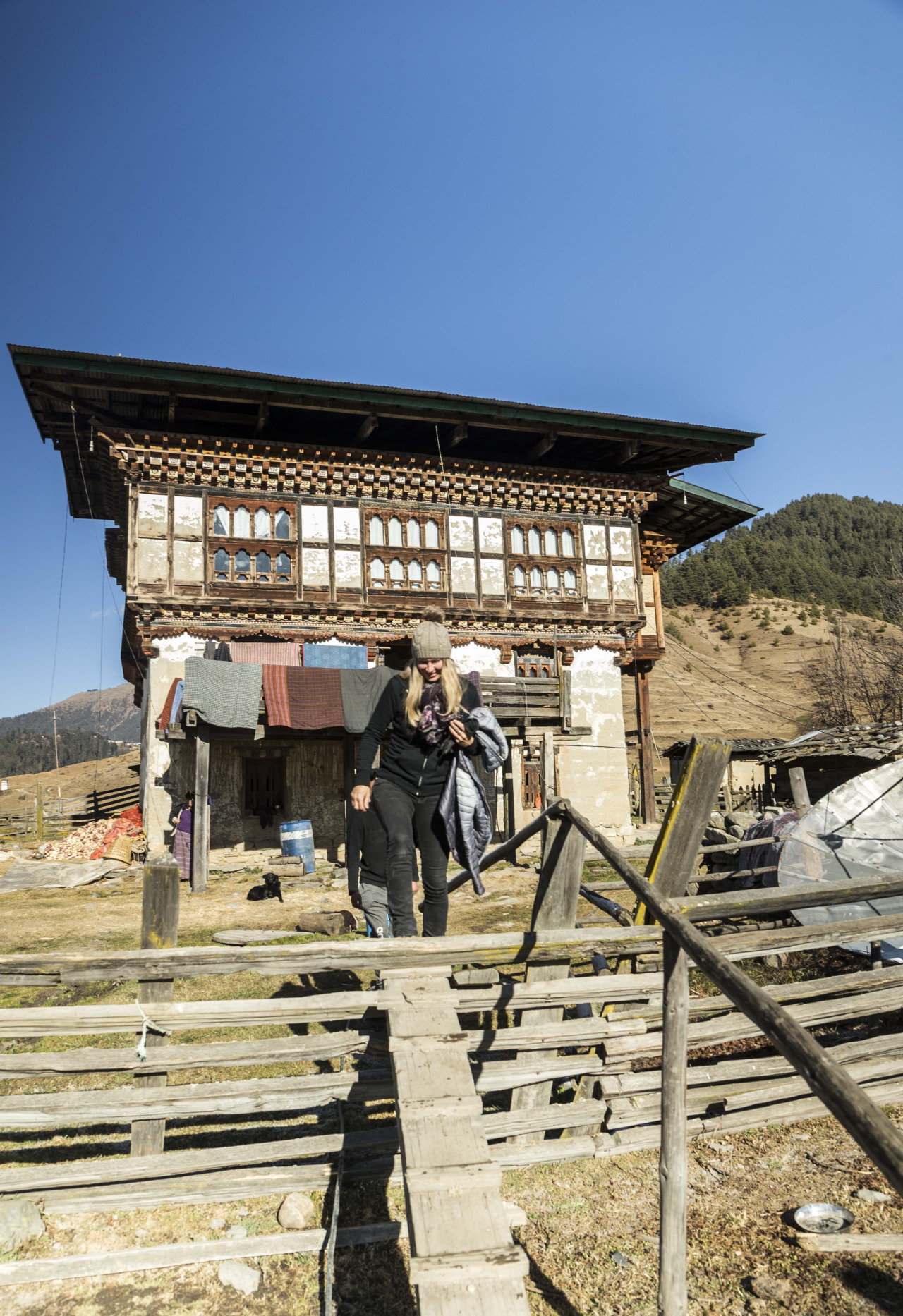 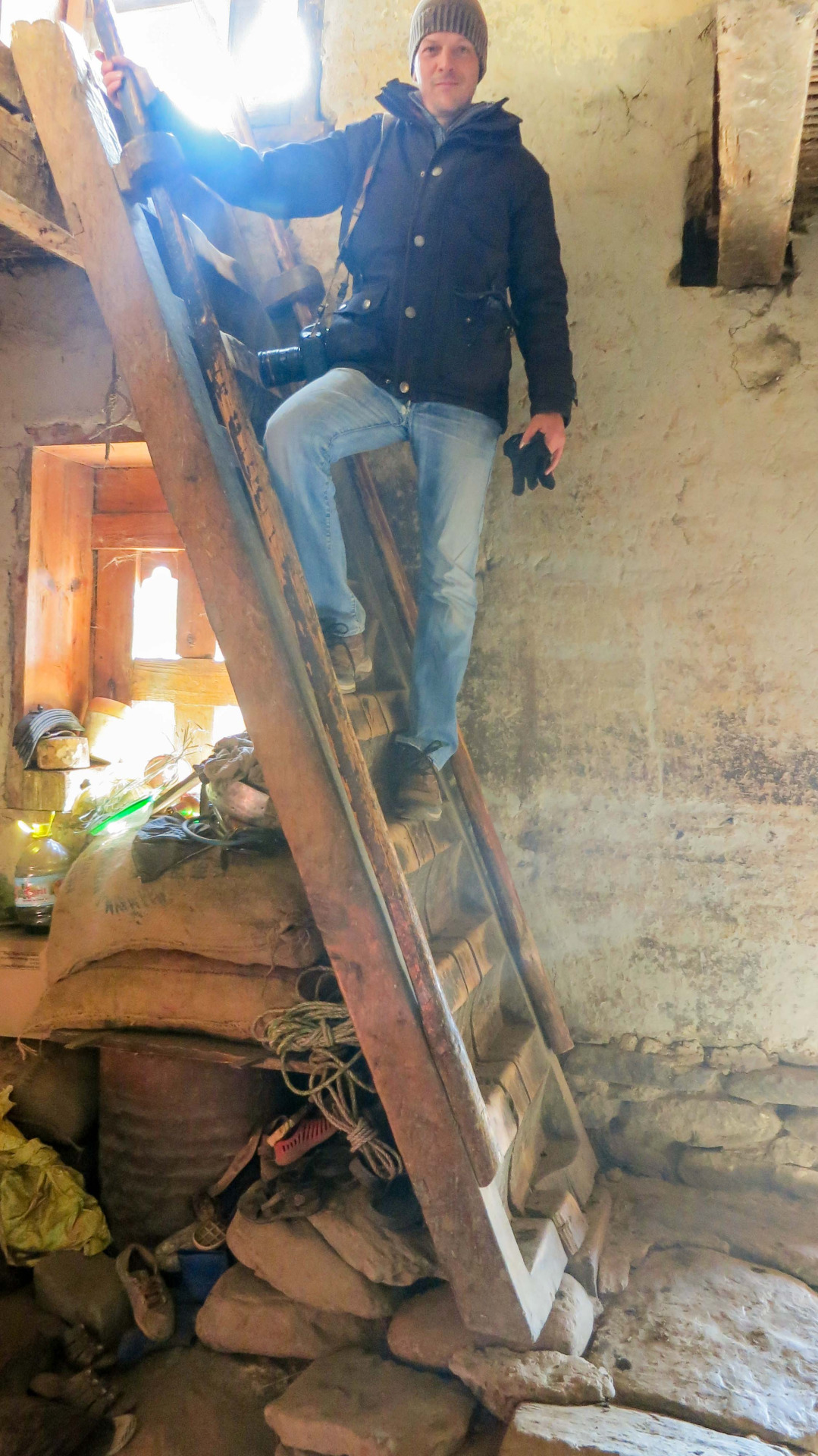 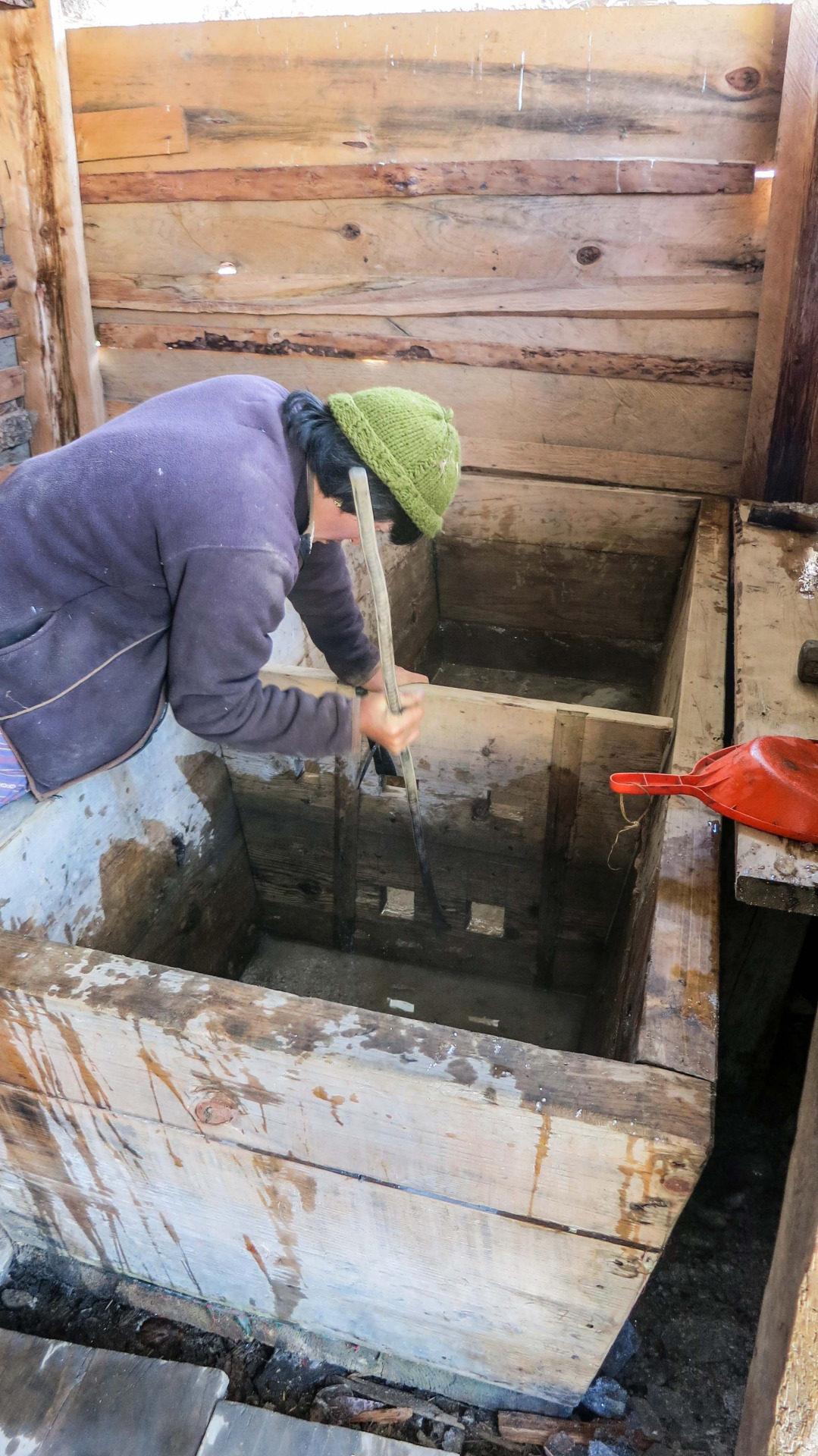 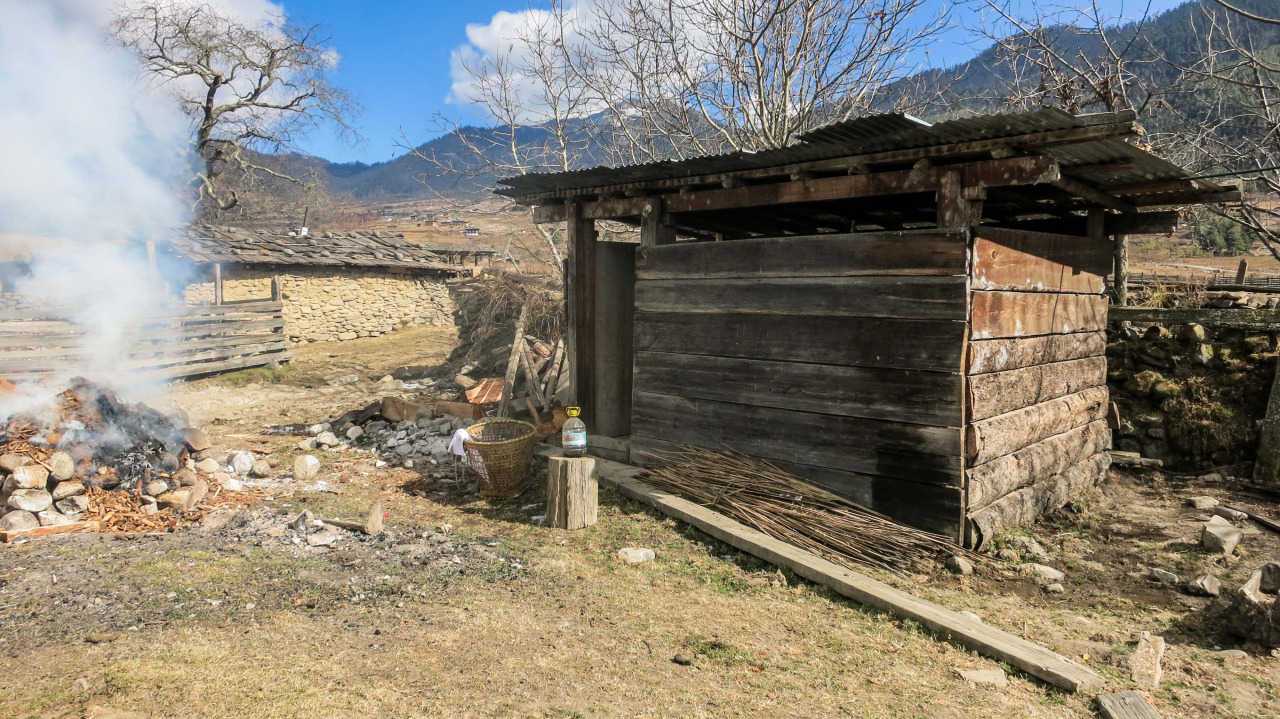 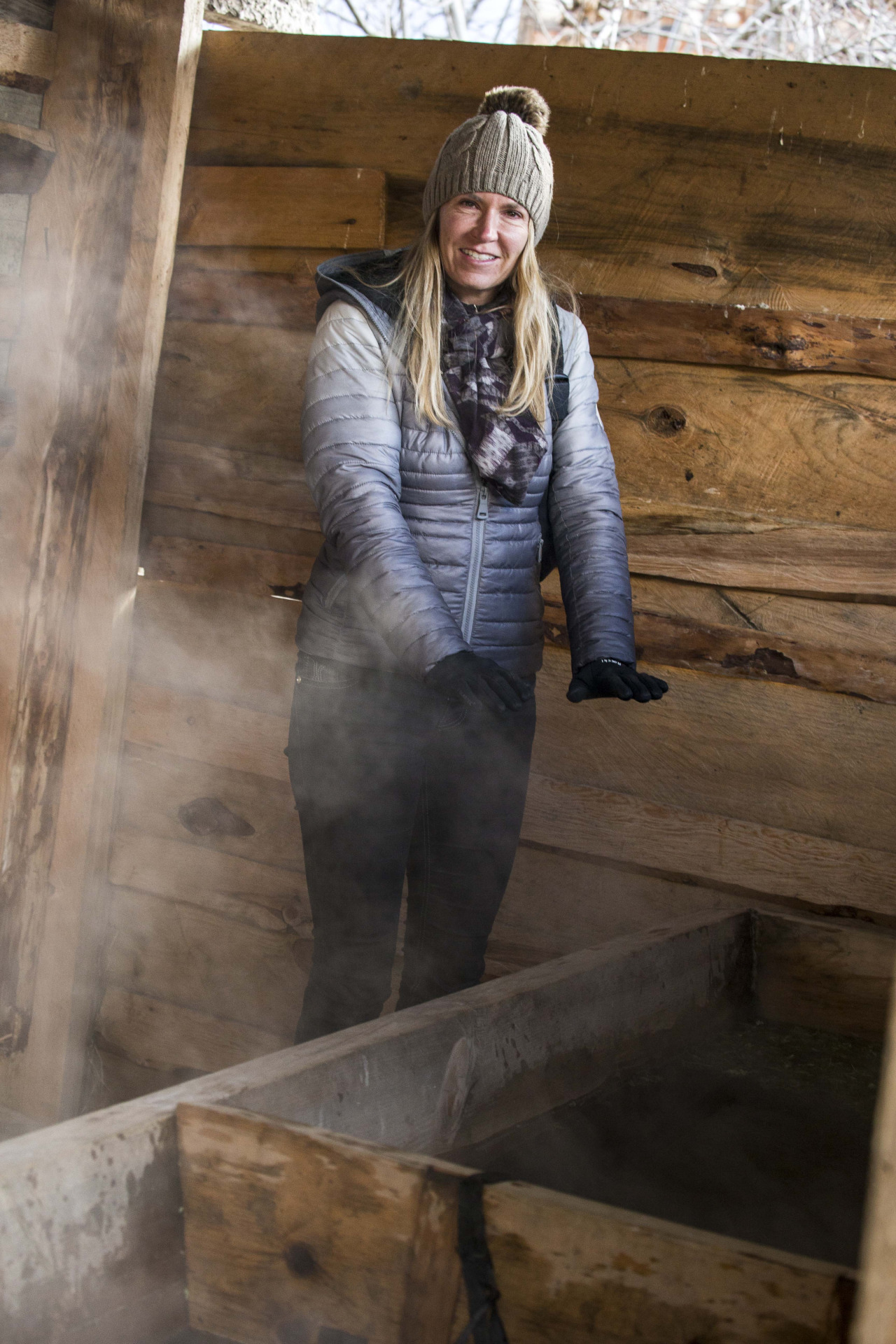 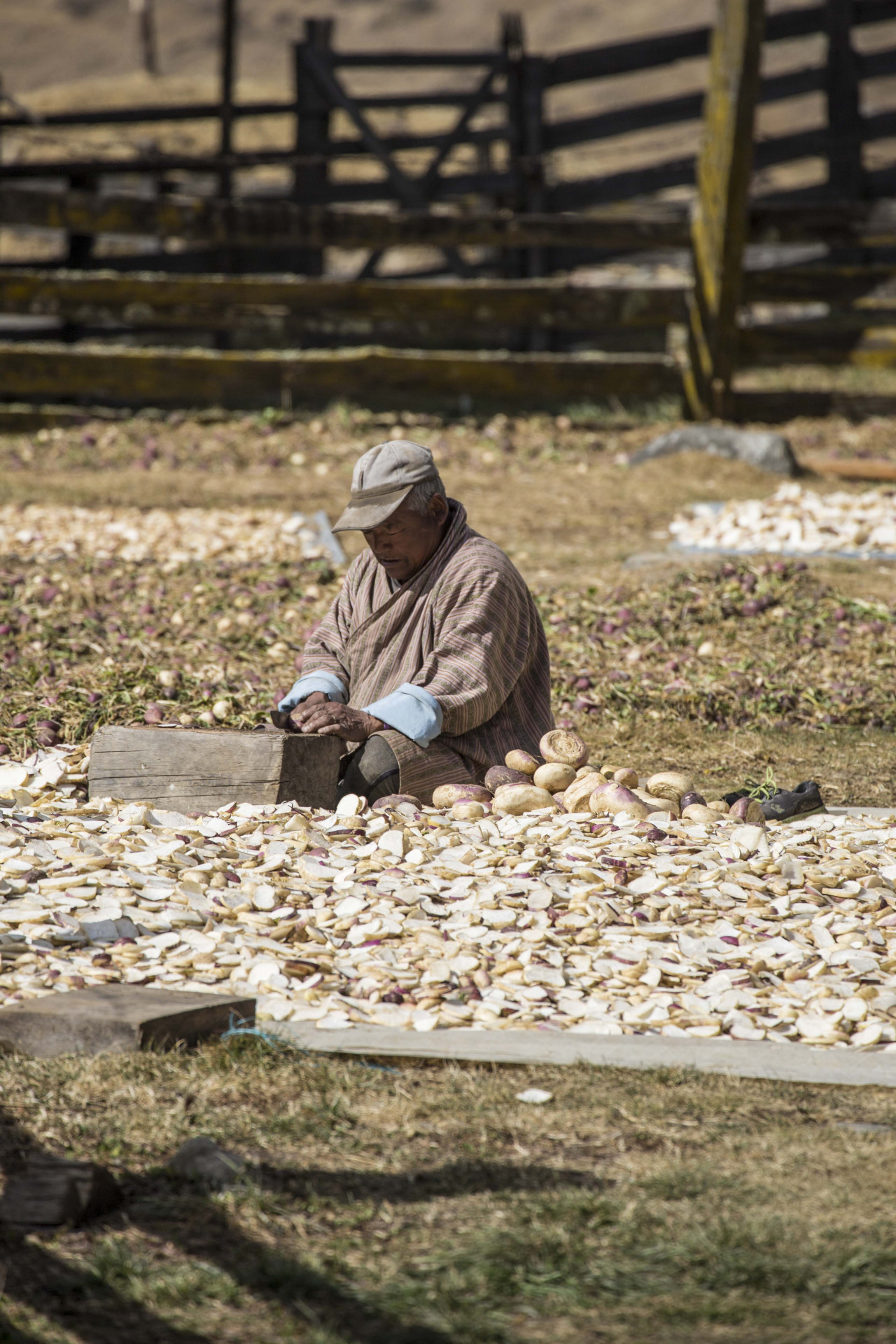 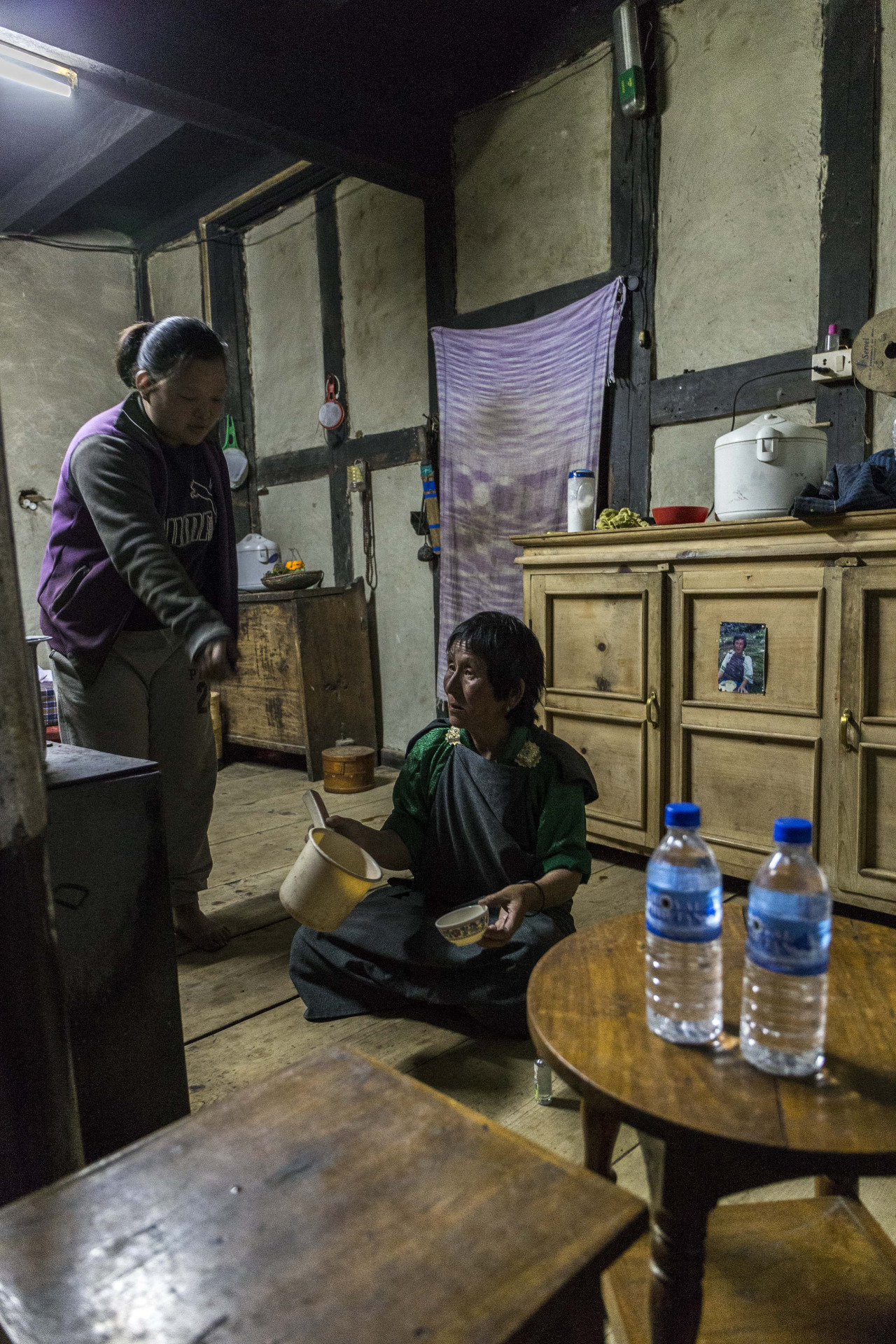 We thought it would be a nice idea to break up our guest house and hotel nights by staying with a Bhutanese family for two nights. We did not fully anticipate that this entails sleeping in an icebox and measuring bathroom times in seconds due to the freezing temperatures inside.

Literally the ice was forming inside the windows and Chris refused to give up his mountain of blankets he was burying himself under. Esther was cosy in her -25°C down sleeping bag, but she had to muster all her will to get out of it.

Washing consisted of a hot cloth and brushing teeth only. Once the main kitchen with the only stove was warm enough to sit with a down jacket (did we mention that we never had so many meals fully clothed in our jackets?) and  socks (shoes need to be taken off inside the living quarters). Breakfast was delicious as we were served black tea, fried rice and omelette instead of the local butter tea and ema datse (wait for food blog to explain).

Farm houses here in Bhutan usually have three or four levels and are built without an architect or plans. They are a mixture of rocks or brick and wood. On the ground floor animals are housed, the first floor is used as storage and the top floor serves as living quarters for the entire family. In our house there were seven people living in two rooms, one kitchen/ living room and one altar room. The family cleared the altar room for us to sleep in. Cleared the other bed room for driver and guide and squeezed themselves into the kitchen and the one remaining bedroom. We envied them about that spot on the kitchen floor at least that was warm when going to bed.

The bathroom was spartan to say the least and it was so cold that you simply did not want to expose any body part longer than absolutely necessary. As if the family could read our minds, the second day they asked us if we’d liked to try a hot stone bath. We didn’t really know what that was – but the “hot” part of it made us agree on the spot. It turned out that that involves heating up stones all day in a fire. A little shed in the back of their garden contained a gigantic wooden bathtub with two compartments. It had to be cleared from the ice first and filled up with fresh water. Then those heavy and blazing hot stones are piled up on one side. Some local herbs were added and we spent at least an hour or so  soaking in the steaming hot water, dreading the moment we had to get out into the cold again.

The family was very nice and we had a lot of laughs in the evening sitting together after dinner. Chris made them laugh with his pidgin Bhutanese (which was actually coming along much better than Esther’s!) and they showed us some local dances in exchange to see us perform a hilarious attempt to ’ Schuhplattler’ and valse.  We all laughed a lot.

Our host family had cattle, chickens, dogs and a cat (that Chris wanted to take home in the hand luggage). Fun fact: male calves have a pretty sweet life. Some still have to help plough the fields, but many farmers share tractors nowadays, so male calves just get to be part of the herd without doing anything but eat. When asked what the Bhutanese do with them you get a shrug and the answer that it’s not the calves fault to be born male. Hence in our family’s herd of 30 cattle half were male and had a cushy life. Remember, Bhutanese are Buddhist so they don’t usually kill animals. Some do eat meat though, and when asked how they could justify eating meat but not killing animals you get various answers. Some say they only eat animals that die naturally (well with some beef served you could very well believe that 😀) others claim that if someone else is killing the animals then the bad karma you get is not that bad. Weird logic. Others only eat meat that was sacrificed to local deity which is then considered as blessing…

Two of the children living there lost their father and are being simply incorporated into the larger family of grandparents and uncles. The concept of an orphanage is not known here in Bhutan, the family takes care of all relatives as remote as they may be. Grandparents are all still part of the family and in our case grandma ruled the house!

She did not know how old she was exactly, but guessed around 80. She was always busy doing all the cooking, making butter and cheese and brewing ara, their homemade alcohol. When she demanded help from the kids she got it without any protest (take note Alaska and Finn!)

She was also addicted to Doma, the mix of betel nut and leaves with lime paste that they all chew here. Not a nice habit as it smells awful and is clearly not good for your health. Mouth cancer is linked to it as well as terribly stained teeth. Red spit is seen everywhere which are the remains of Doma chewing. Apparently it gives you a slight kick but nothing major. Probably nobody is perfect…

Modern amenities like washing machine, dish washer, microwave, dryer, iron etc. are non-existent here despite enough water and electricity present. The rice cooker is the only electric house hold item we ever saw.

Washing is done by hand in freezing temperatures. The Bhutanese are very tidy people. All the houses we went to were simple but spotless. They air their bedding in the morning and then roll it up for the day. At night they make their beds anew.

For families that have enough space there is one room dedicated to prayer, the altar room. That’s where guests sleep. The concept of central heating or warm water is also non-existent, even in the hotels here. Each room has an own heater and boiler. Quite puzzling as it is fairly cool for several months of the year.

As with many young people here, also the young ones of this family want to study and get an office job rather than working the land. Sad to see but not new. After all Bhutanese youth is not that different from other parts of the world.