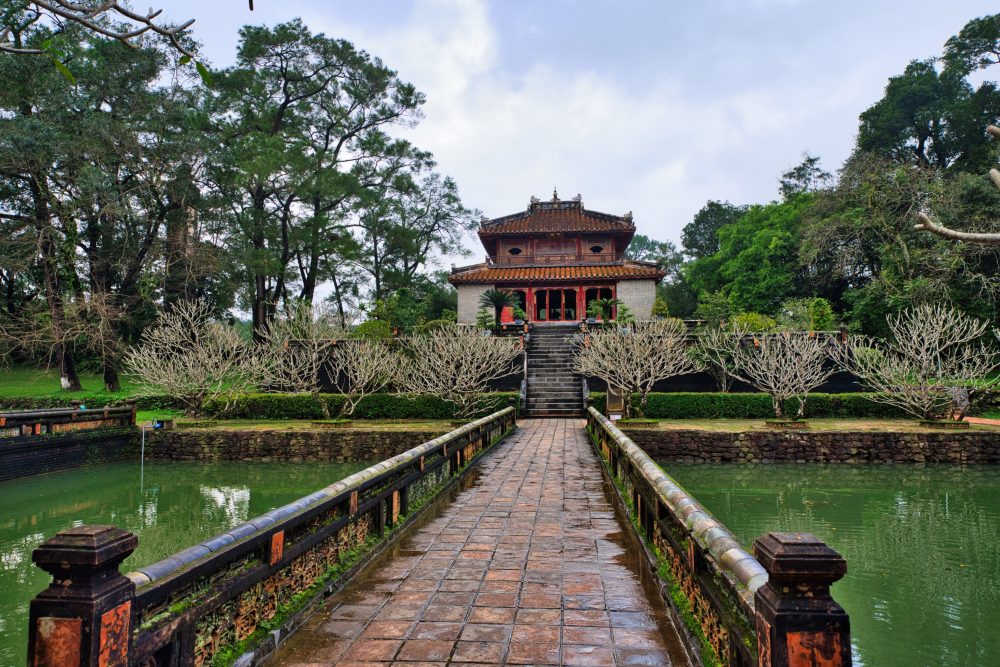 Today we woke up to a drizzle again. The weather gods are not with us on this trip… More rain than sun and many days just a cloudy and hazy grey sky.

Nevertheless we set out with a full day of activities planned, hoping for some rainless windows during the day. Both clad in Gore-Tex ( had to put that plug in…) we drove to the ancient citadel. Hué was the imperial capital for many centuries, before Saigon and Hanoi.
Strategically situated between the North and South of the country, king Gia Long built a huge fortified complex between 1803 and 1833. The outer square wall measures two meters thick and ten kilometers long once around. The moat protecting it measures 30 meters across and four meters deep. It has ten gateways. It is a huge area once you enter it.

The citadel has three distinct sections: the outer fortifications, the imperial palace and the purple forbidden city. All square shapes nested inside each other.

The imperial palace, where the king resided unfortunately was under renovation, as was the queen’s palace. While select few guests and dignitaries were allowed in the imperial enclosure, the forbidden city was strictly forbidden to all men except the king. Here is where all the hundreds of concubines were living guarded only by eunuchs.

The queen mom also was living here and had a very charming property including living quarters, temple and tea house with pond.
Despite the drizzle we took two hours to wander through the vast terrain of the citadel, admiring the many artifacts that we saw.

The kings seals, the treasury, the royal theater, the many gardens with their meticulously kept bonsai trees and of course the many pagodas and temples inside the citadel.

Too many things to mention, other that the whole complex was badly destroyed by the French and American wars and is slowly still being rebuilt one house at a time. The renovation and cost to keep up such a vast property must be mind boggling.

After the visit to the citadel, we had one more stop before lunch: the Tien Mu Pagoda. This is the most famous pagoda in all of central Vietnam. Built in 1844 directly on the Perfume river on a small hill it has a tower with seven stories for a total of 21 meters, a modest temple but a huge significance.

Since 1966 political protest has assembled here after one of the monks who trained here drove to Saigon, poured gasoline over himself and set himself on fire as a sign of protest against the suppression of buddism in comparison to the catholic faith.

We went to lunch by dragon boat. The 30 minute drive on the Perfume river (named after the many flower blossoms scents in spring time) is usually very picturesque but with todays rain it literally was a wash out…

We had lunch at a restaurant called litte Italy, of all places, but had a completely Vietnamese meal there.

On we went to two of the six kings tombs around Hué. Not expecting much, we were surprised to see the splendor and size of the tombs.

First we climbed up a hill where King Khải Định is buried.

King Khải Định was emperor of Vietnam between 1916 and 1925. The tomb took eleven years to built and Khải Địn died before it was finished.

A larger than life size bronze statue of him sits inside the building on top of his actual tomb underneath.

The whole area is a weird mix of French grandeur like some of the French kings had and Chinese tradition, as everywhere Chinese symbols and craftsmanship are on display. From French golden mantle clocks to intricate Chinese mosaics. From Louis XV furniture to lots of Chinese stone dragons everywhere.

This tomb is quite a statement for a king, widely regarded as a French puppet as Vietnam was a French colony during his reign. It was nevertheless a worth while visit.

On we went to the second tomb for today. This one in total contrast to the first one. King Minh Mạng’s reign lasted from 1820-1840 and it was him who planned this stunning landscape tomb but he never got to build it.

It was actually then built by his successor king Thiệu Trị and took only three years to build. What makes this tomb so unique is the garden setting and the intricate ponds and lakes that surrounds the multi tiered layout. Laid out on flat land it nevertheless makes one climb up and then down stairs to get from one section to the next. From the Honor courtyard (complete with honor guard in stone consisting of two elephants, two horses and eight Mandarin warriors) steps lead up to the Stele pavillion, from there steps down, and then up again to the Pavilion of light (where the king was supposed to spend leisure time).

Then down a flight of stairs again and up to the kings sepulcher where his actual gravesite is. In between staircases are bridges across artificial lakes with plenty of fish in them.

All this built in traditional style and in a grandiose garden setting. The pictures speak for themselves. It was a really impressive afternoon, despite the weather.

Back at the hotel late afternoon, we just wanted to relax and pack for tomorrows trip to Da Nang and Hoi An.