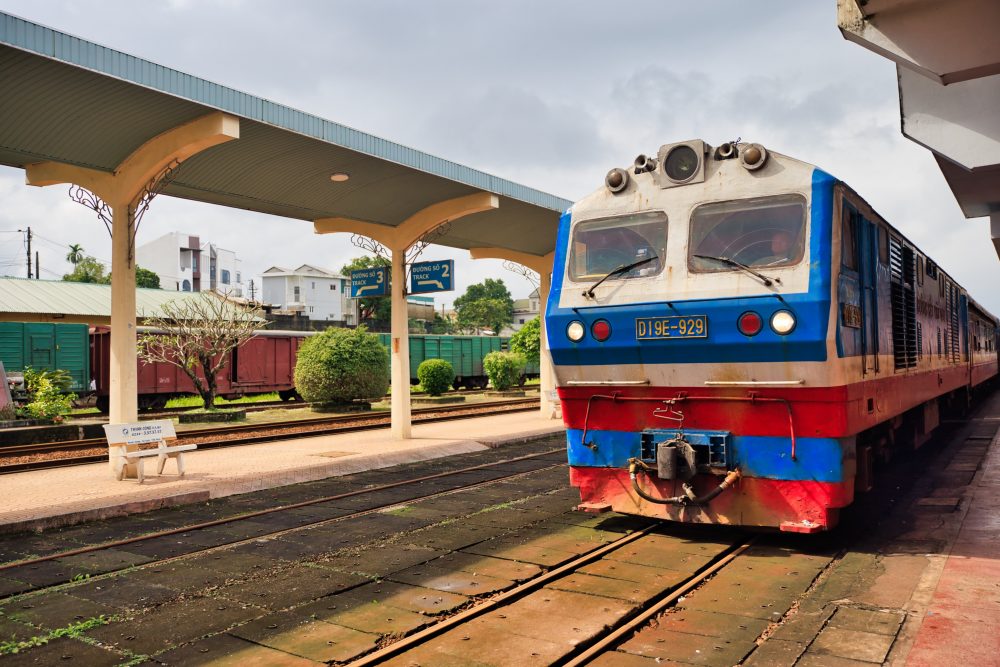 Today we traveled from Hué to Đà Nẵng by train and then by car to Hội An. Luckily we had seat reservations as the train was sold out.

There is only one railway track in Vietnam connecting the five major cities together. Ho Chi Minh City (Saigon), Đà Nẵng, Hué, Dong Hoi and Hanoi. There are only 2-3 trains a day, plus some cargo trains and so for the majority of the distance there is only one train track for both sides. Every 50 Kilometers is a stretch of parallel track so the trains can pass each other on their way.

Train accidents are rare as there are only a few of them and the maximum speed is 60 km/h. They are very useful to travel overnight as they have sleeper cars . Our trip from Hué to Da Nang only lasted about 2.5 hrs. No need for a sleeper car for us. Waiting for our train at the Hué central station, we were amazed at how many people took pictures on the tracks as they are on level ground with the platform for the passengers. German train personnel would have had a fit.

Slowly and with some delay the train started to approach with a lot of honking to make the people leave the tracks and we heaved our heavy suitcases onto the carriage and into our very large overhead compartment.

They are really geared towards people having lots of luggage. We saw plenty of boxes, suit cases, bags of all shapes and sizes. Often a whole trolley full for a single family.

Settling down into our seats, having bought some Coke, Water and Pringles at the station to get us through lunch, we watched the other travelers. Opposite us was a Vietnamese couple, he much older than she, she wearing a mask at all times, he did not bother. opposite on the other side as a Swedish couple, that looked like they had no fun whatsoever watching films on their iPhones the whole time.

We have to admit: due to the weather there was not much of a view beyond watching the passengers in our coach. A number of the other passengers went straight to sleep curled up somehow in old fashioned plastic leather clad seats (with USB ports for charging!).

All of a sudden there was some commotion at the back of our carriage. Ah! food was arriving! Three trolley carts were wheeled in quite noisily, two filled with buffet style open containers full of cooked food.

The entire carriage started to smell like grilled pork and onions. Meals were served for the paying passengers on real plates (no plastic!) complete with steamed rice and vegetables. Quite fascinating to watch. The third trolley had smaller items and drinks. We opted for four hard boiled eggs as a snack which proved to be a good choice. Slowly the train chugged along the curvy tracks along the eastern coast of Vietnam. Sometimes with barely 10 km/h, depending on windiness, passing traffic and steepness. It would have been a great scenic drive were it not for the rain again. Big droplets on the windows does not make for great views.

Arrived at Đà Nẵng station we were picked up by our driver for another 45 min drive to Hội An. Đà Nẵng is a big city and quite commercial. Lots of businesses and trading hubs are headquartered here as it’s half way between HCMC/Saigon and Hanoi. We did not plan on spending any time there apart from using it as a landing and departing spot just like many others do. Our next target was Hội An.

Hội An has not been destroyed by the wars at all and has a beautiful old town that is largely preserved as it was in olden days. It is said to be the „frenchest” and most picturesque city in Vietnam.

Having checked into our centrally located hotel (Hội An Central Hotel its fitting name), we immediately set out on foot to explore. Having high expectations on temples, pagodas, old buildings etc. we almost felt overwhelmed by the number of tourists clogging the streets.

Except at the Pearl place, we had not met many tourists at all here in Vietnam, always avoiding the crowds and all of a sudden we were engulfed in masses of people. Chris muttered something about feeling to be at Disneyland. Talk about a cold shower…
We squeezed through some of the sights together with many hundreds of others about then decided that this wasn’t for us and decided to come back later in the hope that the crows would have dispersed in the late afternoon.

Wandering out of the old town, the crowds got immediately less and we settled down to an excellent Bánh mì, a Vietnamese style sandwich. Pondering when to give it another try, we decided first to scout out some tailor and shoe shops.

Hội An is famous for it’s custom tailors who sow a suit, shirt or dress over night to measure. Hundreds of different fabrics are on display, as are some of the styles but they make pretty much everything you want – even from pictures you find on the internet or your from your favorite brand.
As it takes some time to negotiate a price, select colors, fabrics and take measurements, we decided after having wandered around comparing shops, fabrics and their prices, to settle for a lady tailor a bit out of town. Esther wanted to get a traditional style dress made as well as a pair of light summer pants. The negotiation, selection of fabrics and measurement taking took some time but Esther felt the price of 55 dollars for the dress and pants were fair. She had to pay 5 dollars more because she was taller than most customers and the seamstress needed more fabric :-). Sunday morning (Day 18) we can pick it up.
Chris decided that he was going to take advantage of the show makers here (Vietnam is very well known for excellent shoe making) and after having decided between different leather shops he got his foot measurements taken on a piece of paper.

What a luxury having leather shoes made to measure for 75 USD a pair. He picked on of the designs they had in their shop but modified it with a design he liked from home. The shoemaker is going to work off a picture to make it happen. Chris selected two different tone leathers and then decided on the spot to have not one, but two pairs made. It’s really easy here once you see the quality/ price ratio.
Saturday evening he is going back to try them on and in case some changes need to be made, they will be finished by Sunday.
After all this shopping it was dark and we decided to head back into the old town.

We were amazed at how many people had already left. Turns out that many of the tourists only came as day tourists from Đà Nẵng and are leaving around five PM.

It felt much more relaxed walking the old town with a lot less people in it. Now we can actually enjoy the old buildings, the many small shops, cafés, restaurants and street vendors.

Opposite Hội An across the river is An Hội, the party town.

We still saw many people, blasting music and blinking lights there but after a quick tour around we decided that we much prefer the relative quietness of Hội An. We ended the evening, thinking Hội An was not that bad after all, with a drink at a local bar, where two elderly gentlemen played the guitar and banjo. That is more down our alley.