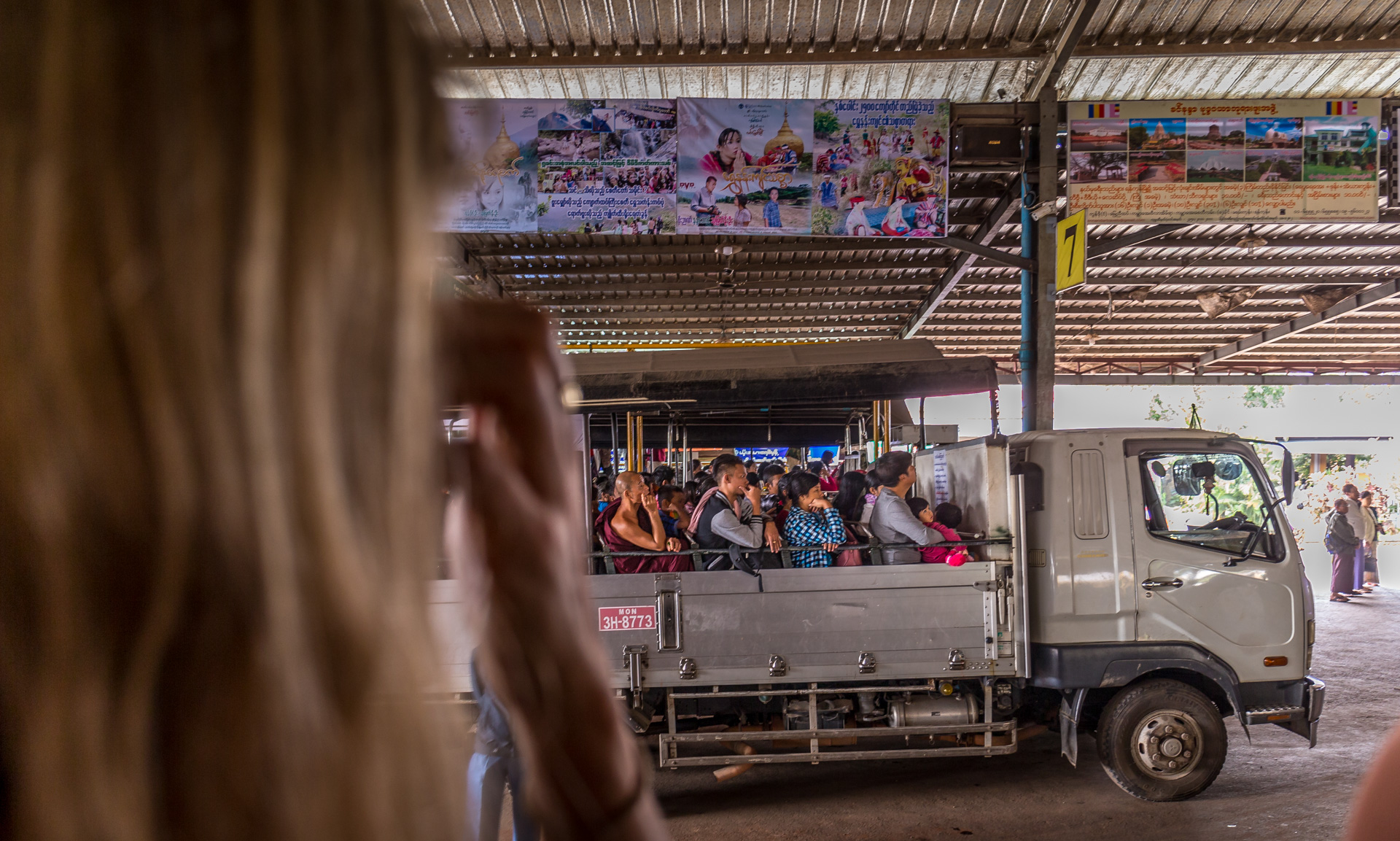 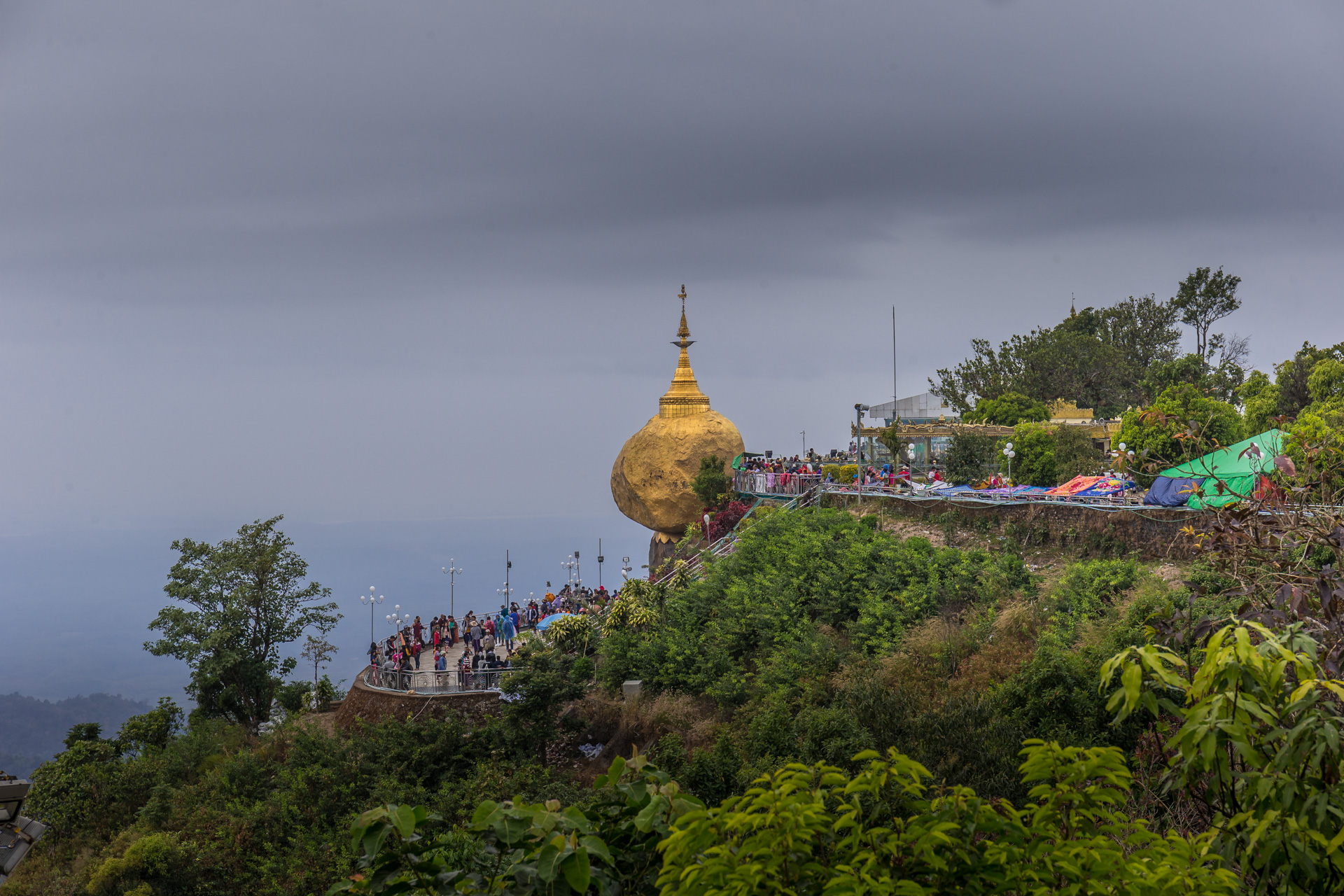 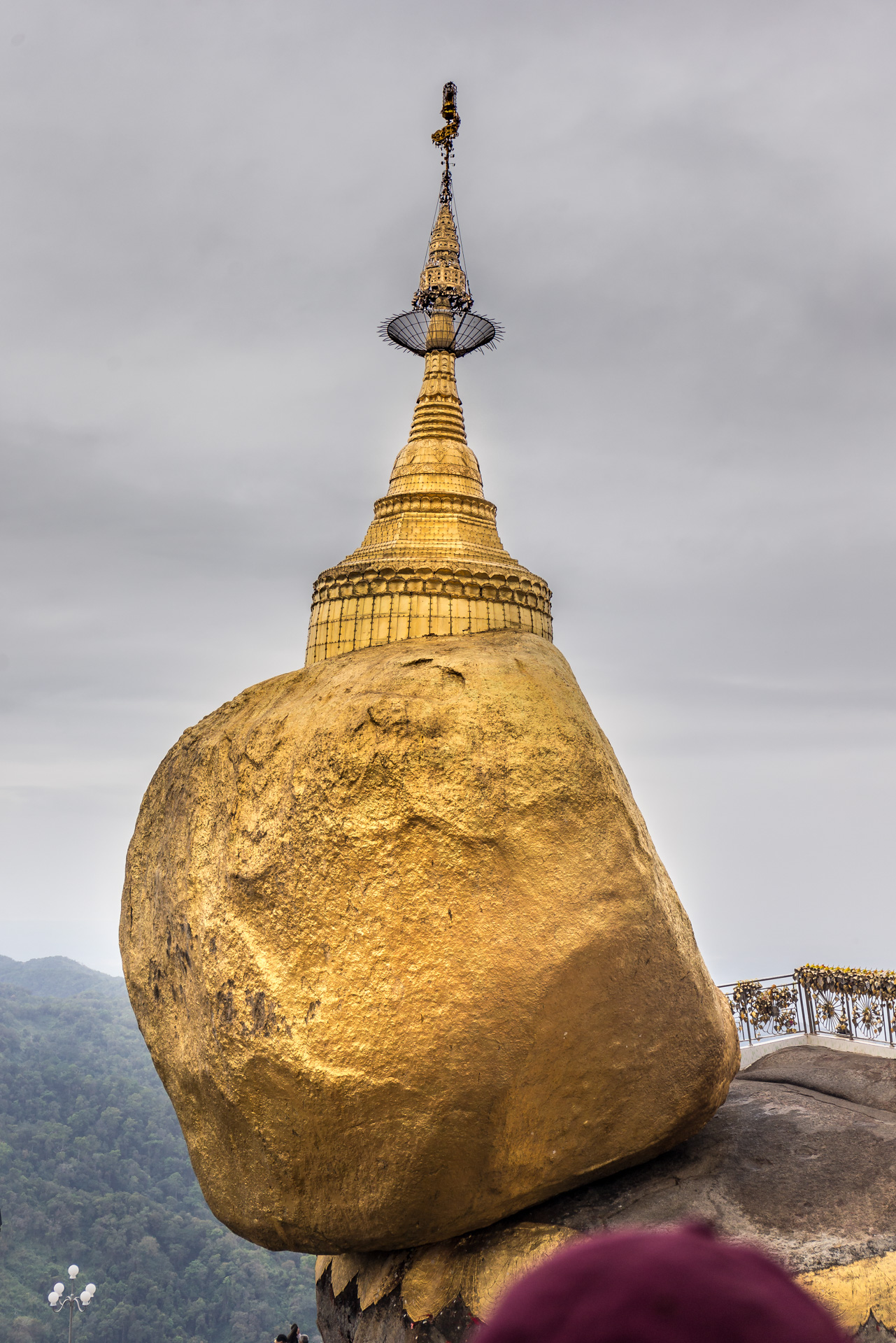 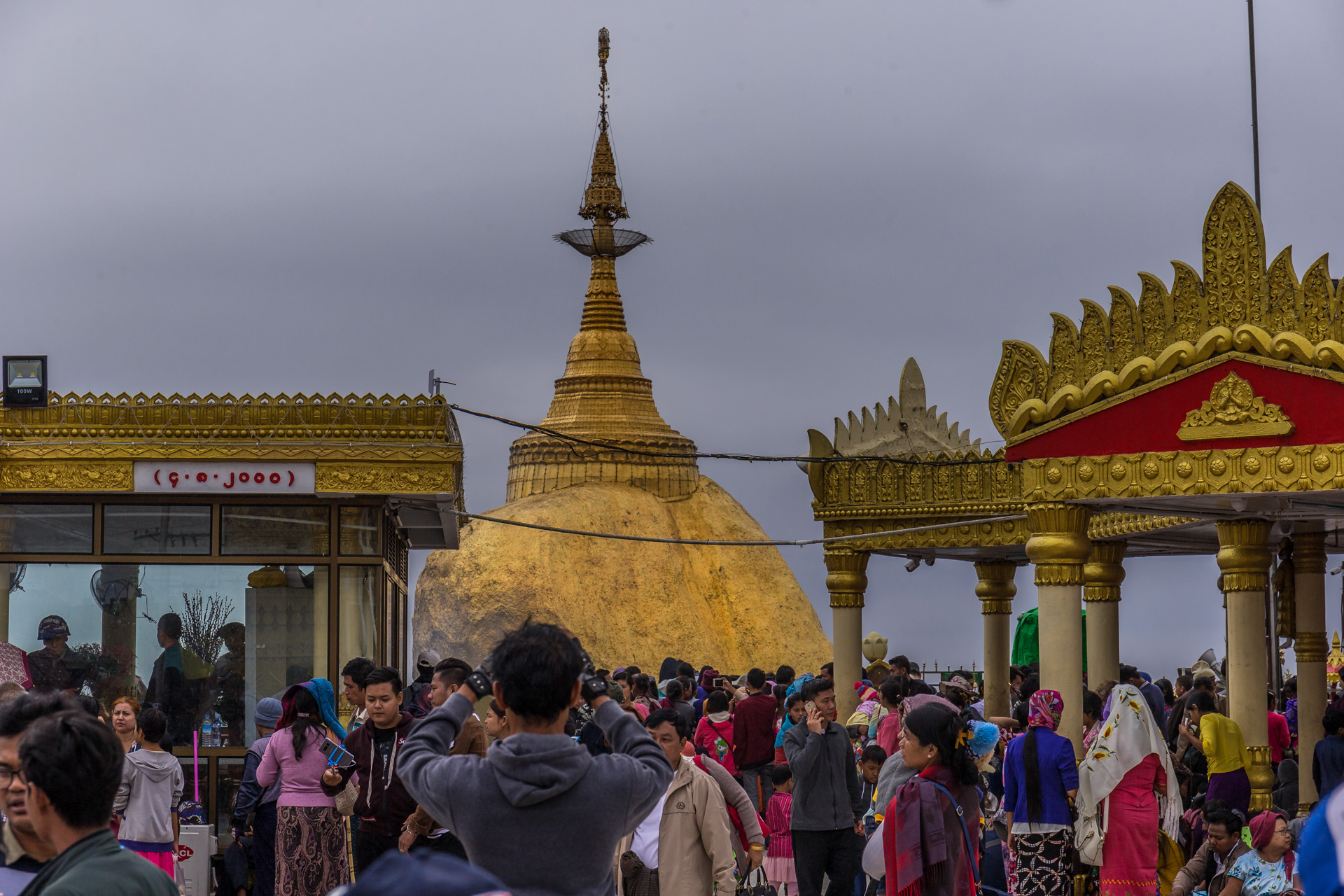 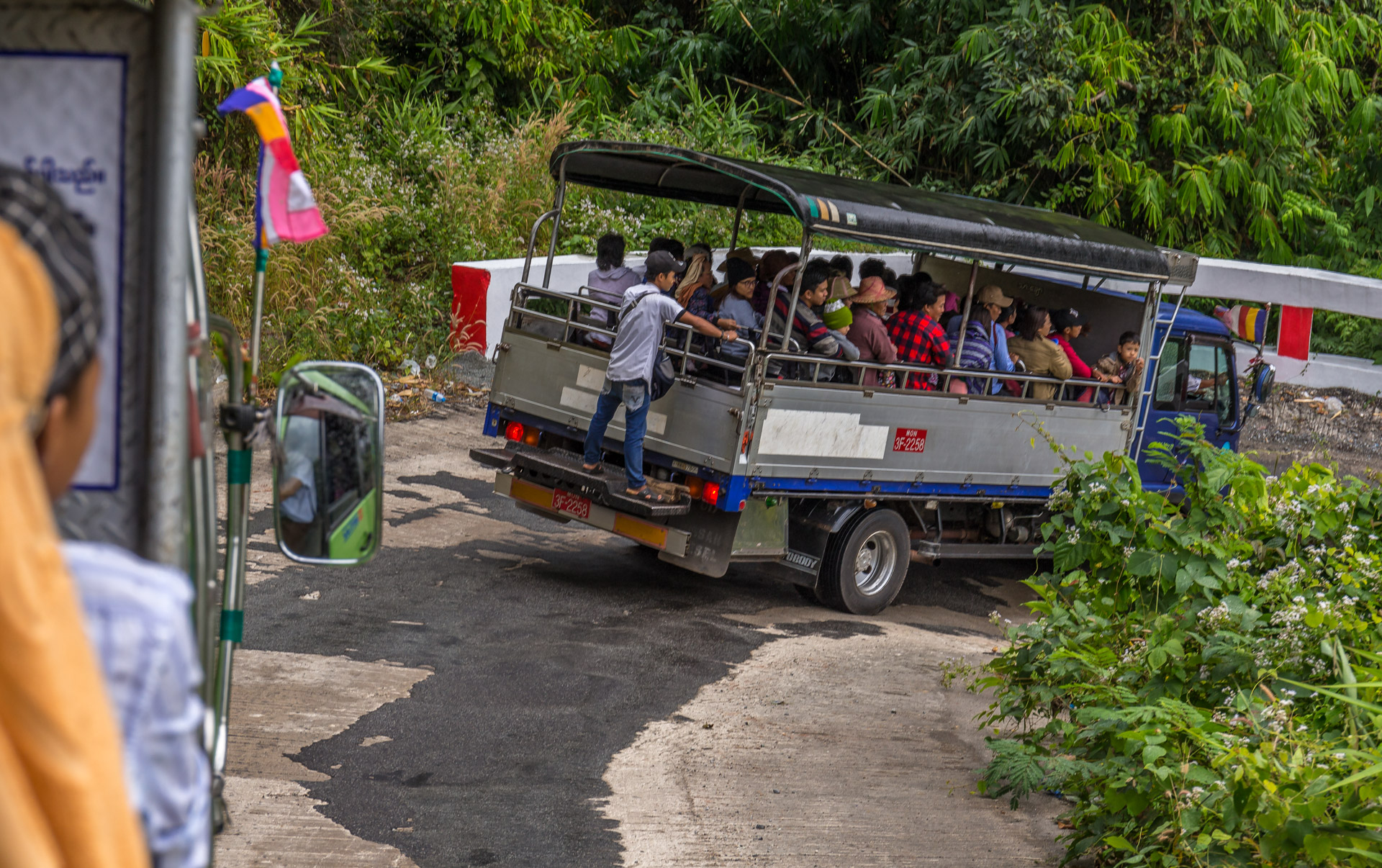 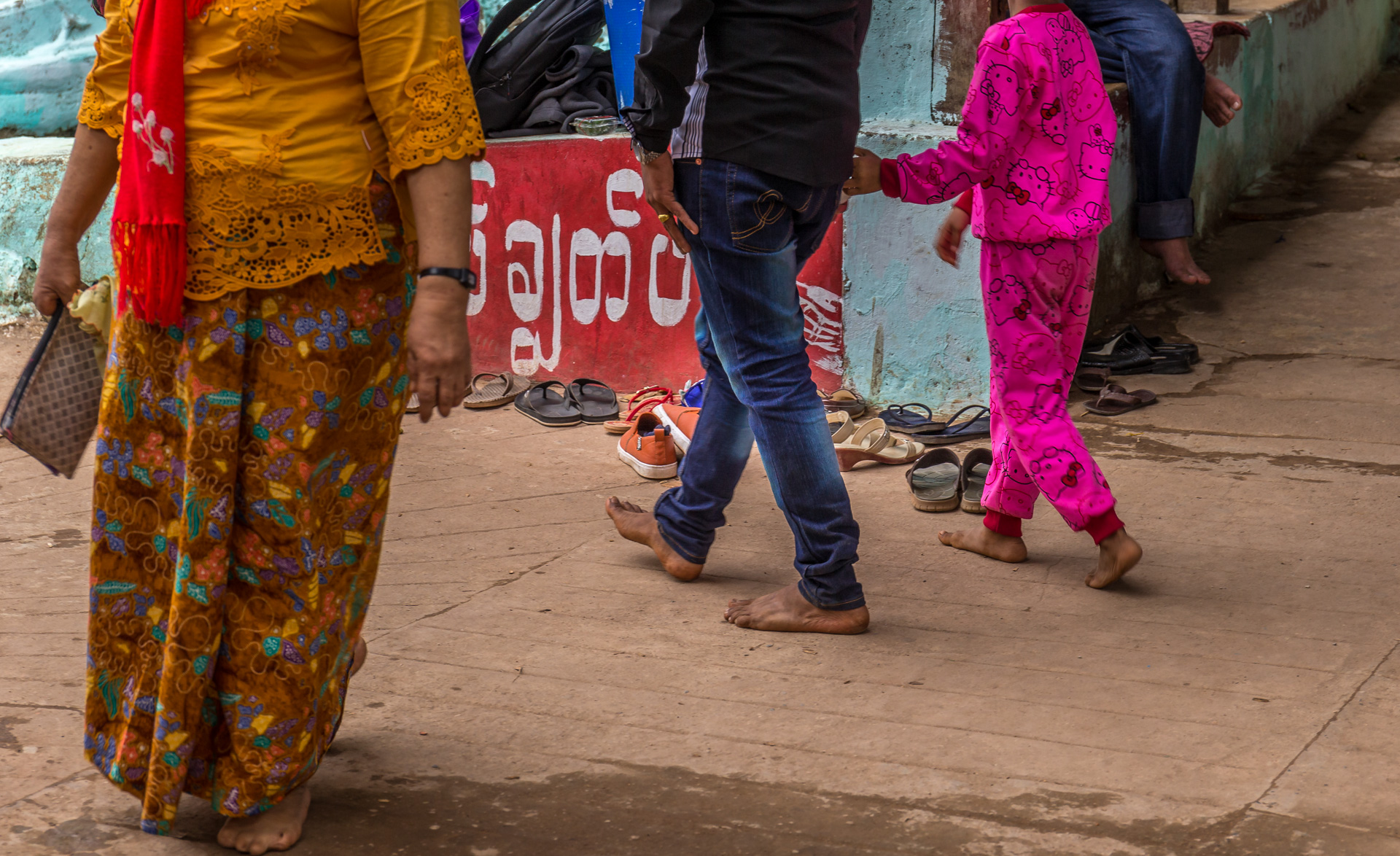 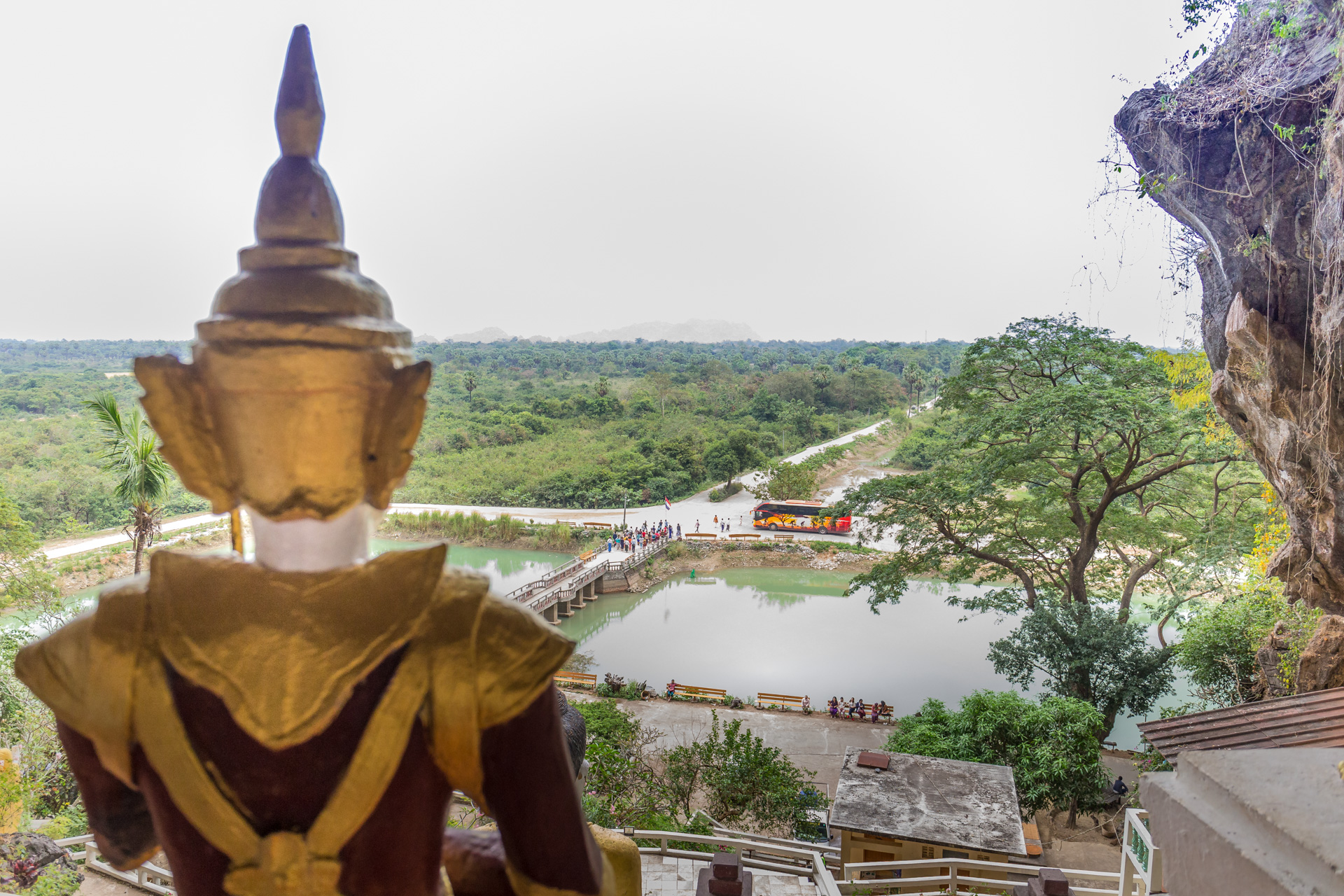 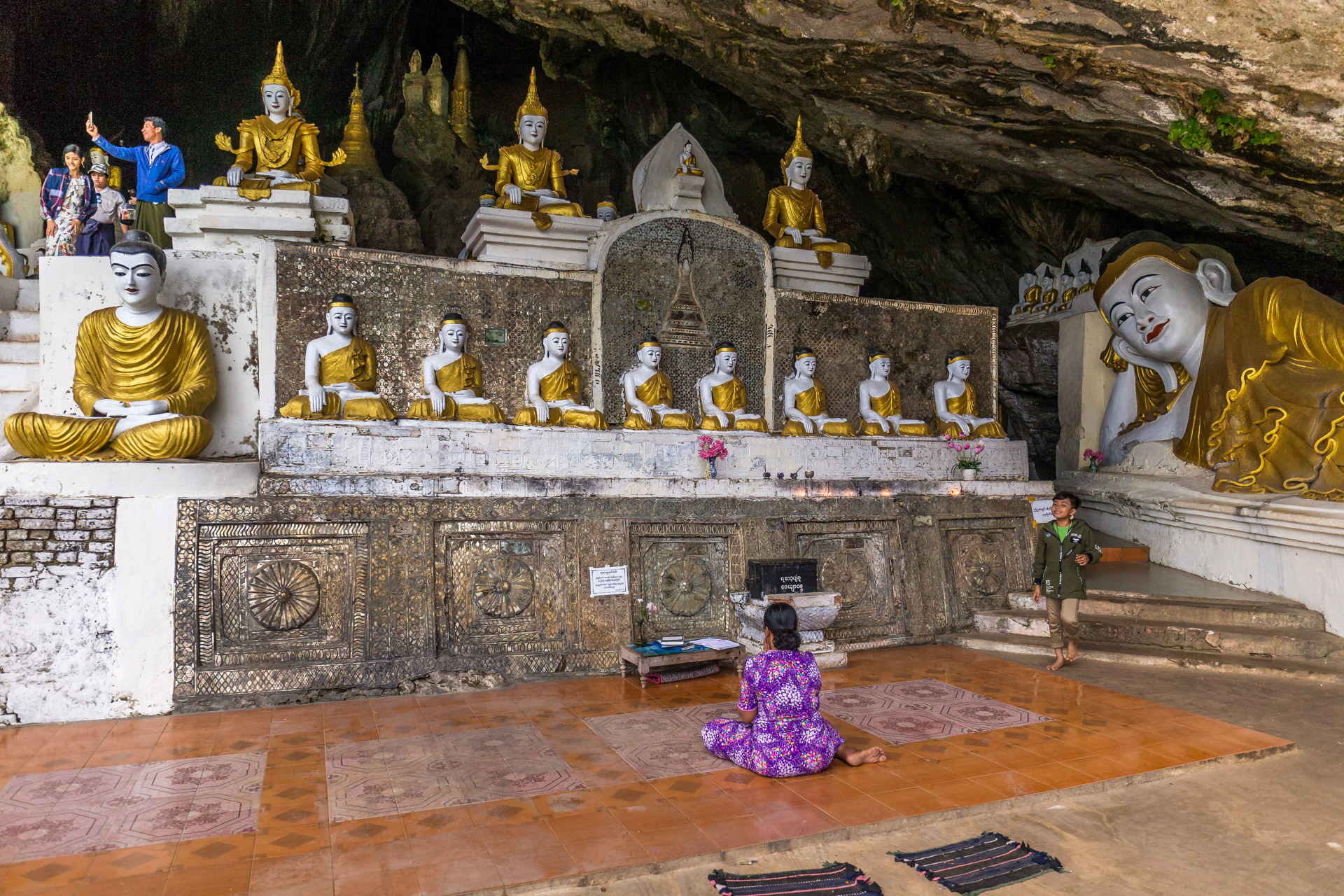 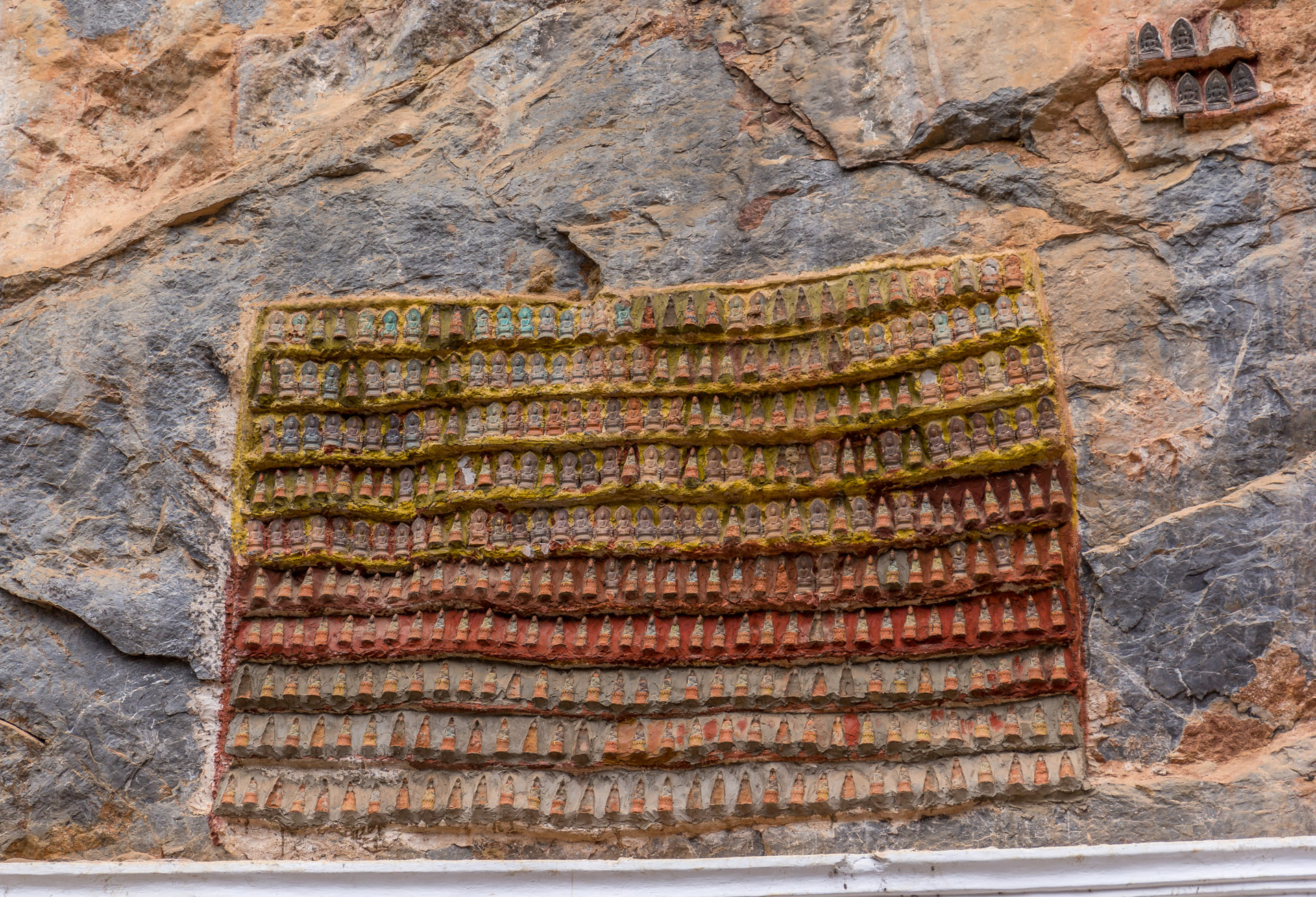 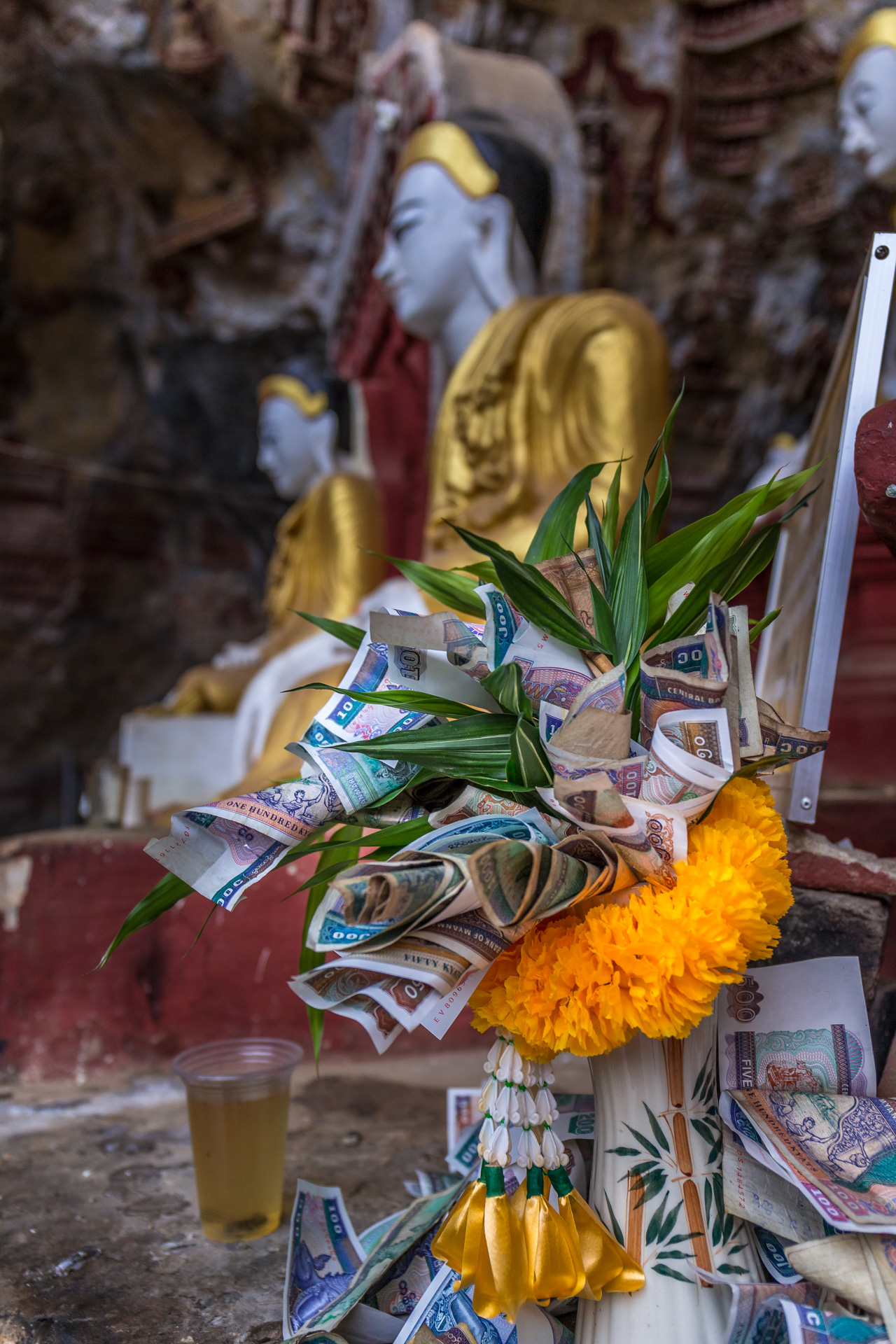 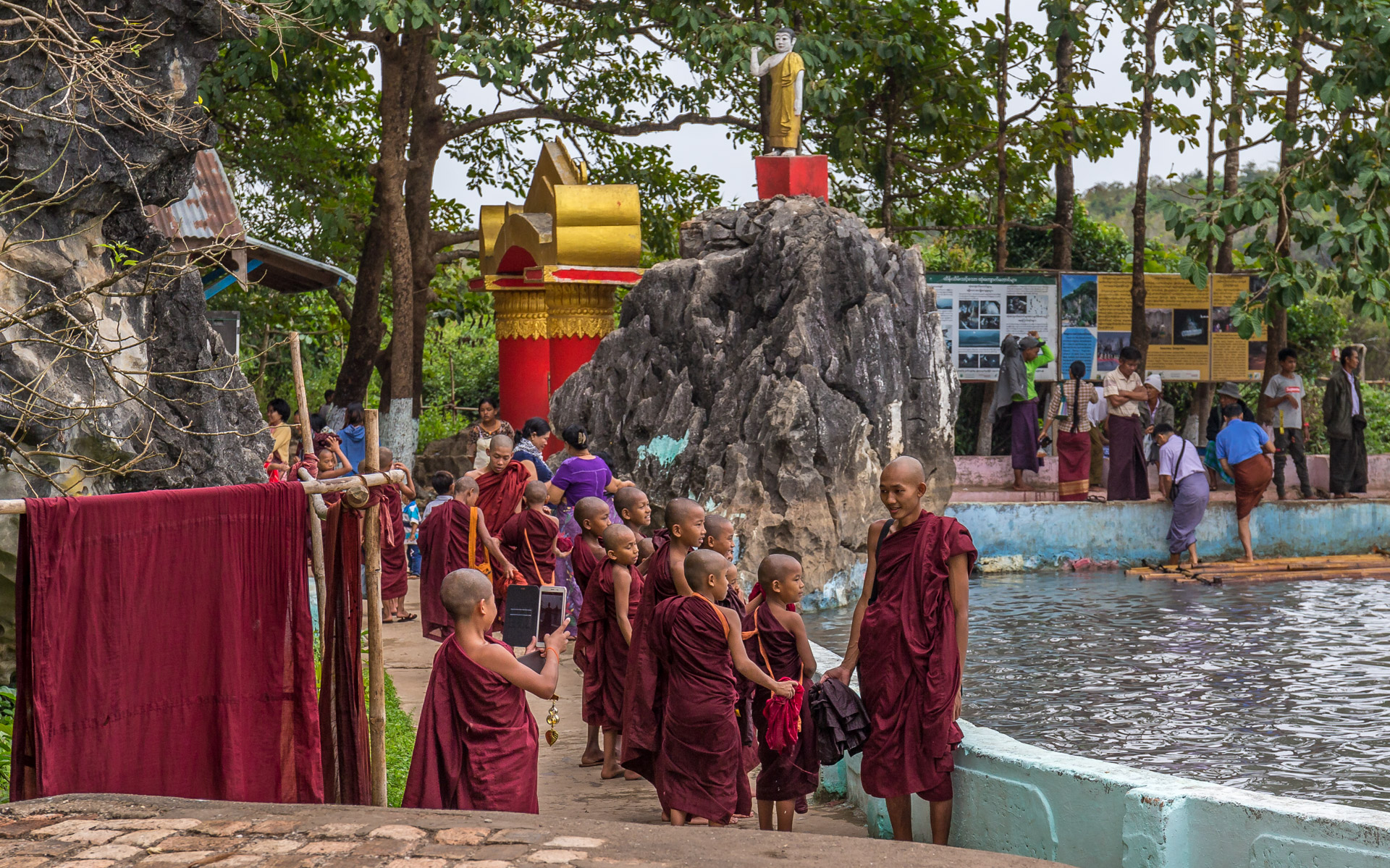 We finally arrived in Myanmar on Dec.27. Munich – Warsaw – Doha – Yangon. Each destination it was warmer than the one before. We arrived very early morning in Yangon and immigration was really fast since we were in row seven on the plane. Our luggage made it too! Our driver Ye picked us up at 4:30 am and off we went exploring our next country.

We decided to skip Yangon at first and head straight for the South, probably the most remote part of our journey. Most itineraries don’t venture beyond the central parts of Myanmar, so the south we were hoping is really unspoiled. First destination was Mount Kyaiktiyo, also called the Golden Rock.

This is a kind of Mecca for Burmese people, everyone strives to have worshipped at least once in their life time at mount Kyaiktiyo. To make the ascent easy for pilgrims, there are trucks that carry everyone, Pilgrim, tourist, local on top of the mountain. All other vehicles must stay behind at the base village.

Ye in his very basic English tried to explain how the whole thing worked. Hop on any truck, pay 2.000 Kyat each on board and meet me down here in half a day , here you have my phone number. What he did not say is that they pack every truck to the gills. Six to a back bench as close as possible and two rows in the truck house. The truck does not leave unless it carries at least 50 people. The conductors hang on outside and off we went on a crazy 45 minute ride, that more resembles a roller coaster ride than and truck ride we had ever taken. For some it has the same effect as a roller coaster…

Up on top, we tumbled out of the truck walked thru a bustling shopping mile and made the final 200 meters by foot, barefoot of course! Rather than some remote mountain top, hard to get to, this was like a Marienplatz up on top of a mountain. We stuck out like some strange creatures making our way through the sea of small, black haired people. Chris was at least a head taller than anybody else and Esther was the only blonde one of the whole mountain. No tourists – just us and many, many Burmese. It was then that we should get a first look at these very friendly, smiling people. A nodded ‘Mingalaba’ ( ‘hello’) gets everybody smiling and giggling no matter the age.

The golden rock, really looks like it’s defying gravity and you expect it to fall down any moment. Tradition has it, that three hair of Buddha deposited atop of the stone hold it in position. Despite the warm drizzle, clans of families were camping out on top of the mountain with blankets, food and their whole families. We learned that it is festival time and many Burmese are on vacation too.

Once down another crazy truck ride, we found Ye and continued on our journey to Hpa An. Next stops were two caves Byin Nyi and Kawgun. Esther met her favorite companions again (did we ever mention she really dislikes monkeys ?!?) The caves are amazingly big and it seems that the Burmese try to cram as many Buddha statues in as possible. One cave had way more than 1.000 Buddha images in all shapes and sizes. All of them had a panoramic view of the surrounding land. It was very peaceful and quiet, once the blaring megaphones of the monks stopped asking for donations (which was never long…)

Each cave is also a monastery and you can see monks of all ages milling about alone or in groups. Monks are very respected here in Myanmar. But even the littlest ones are captivated by the smartphone craze. Buddha or not. A smartphone is a must for everyone here. Cell phone coverage is guaranteed, even on remote mountain tops…

After the caves, and a beautiful sunset, we were so tired that we were glad to arrive in Hpa An and retire for the night after a quick dinner, especially since it’ll be an early day again the next morning.