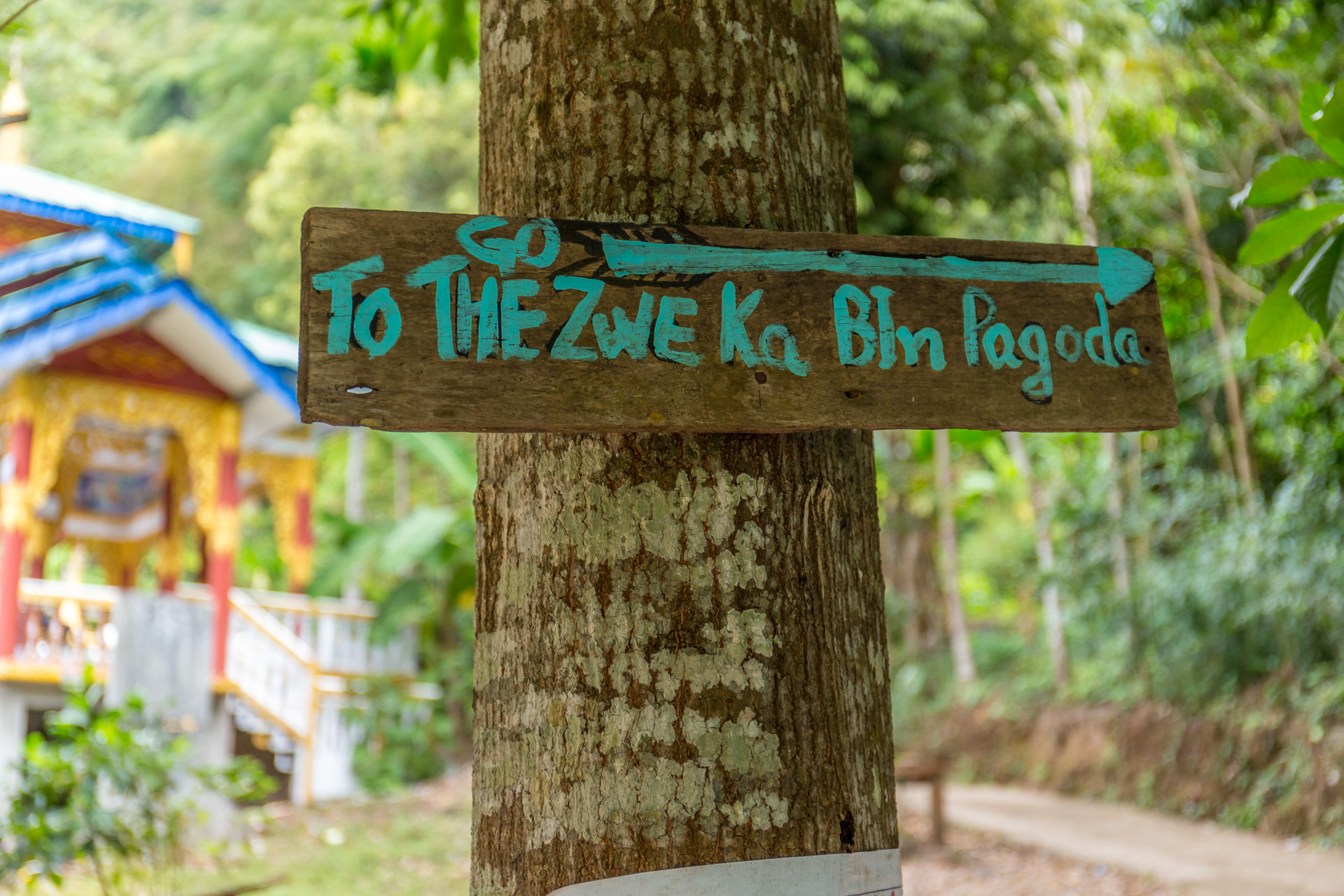 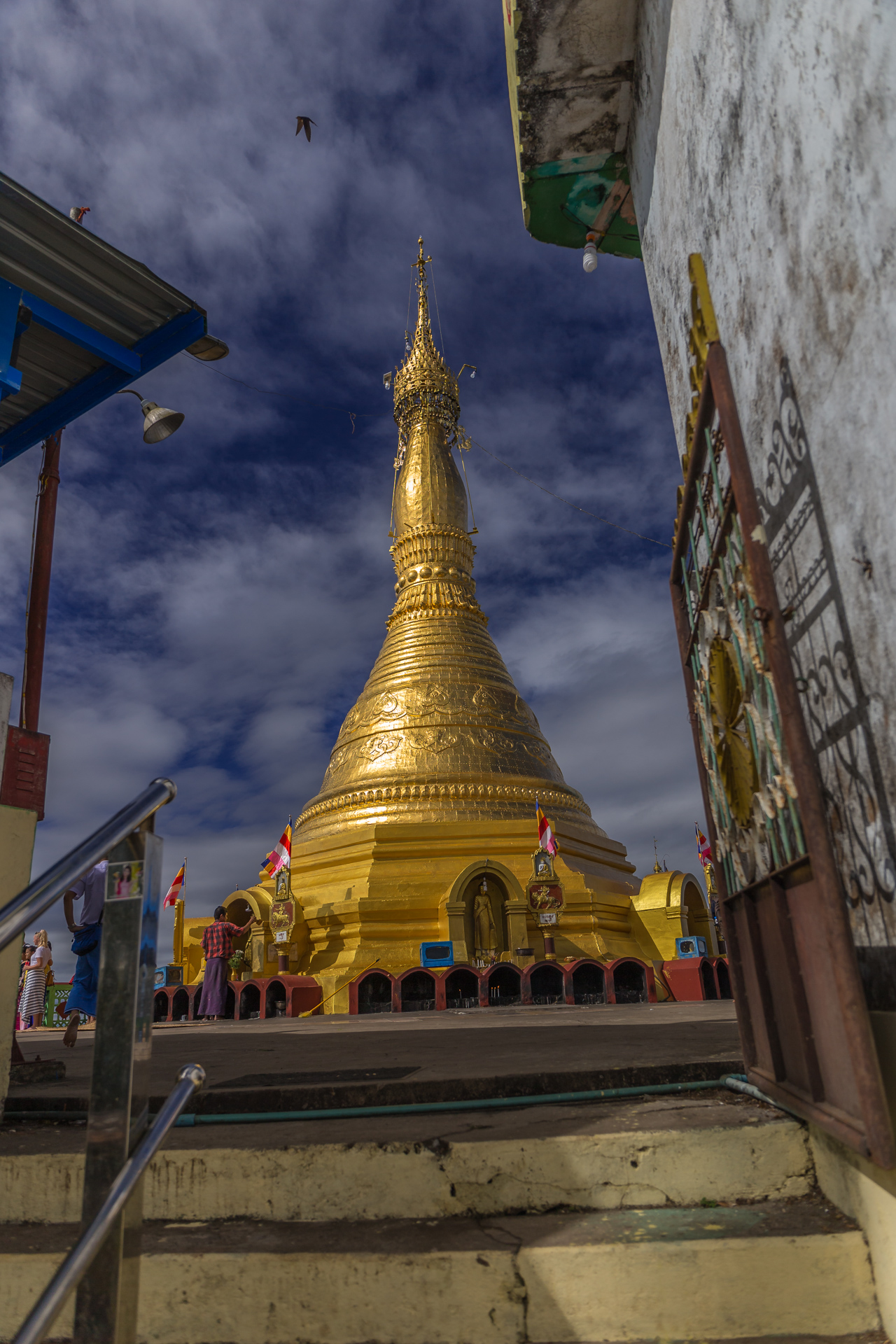 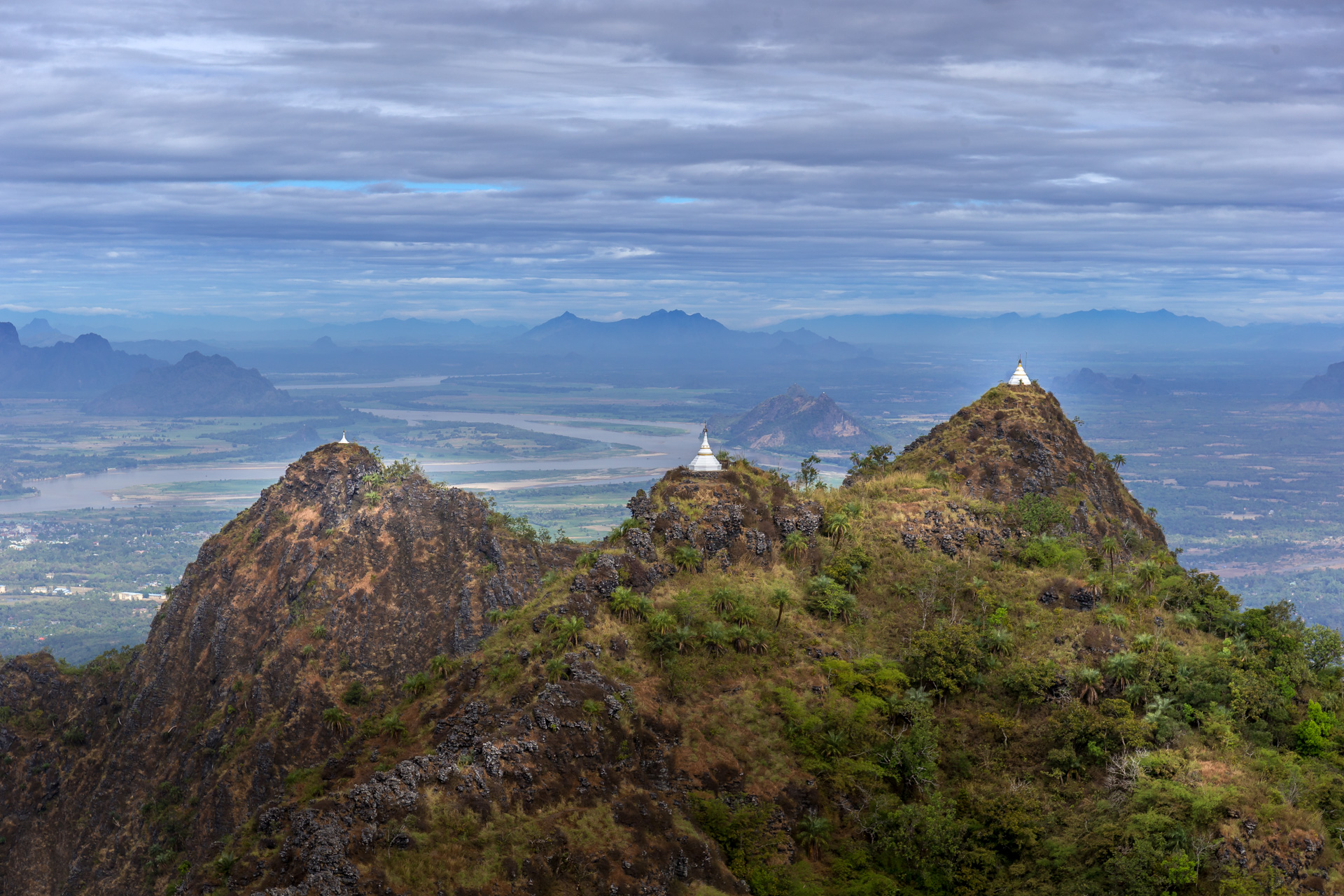 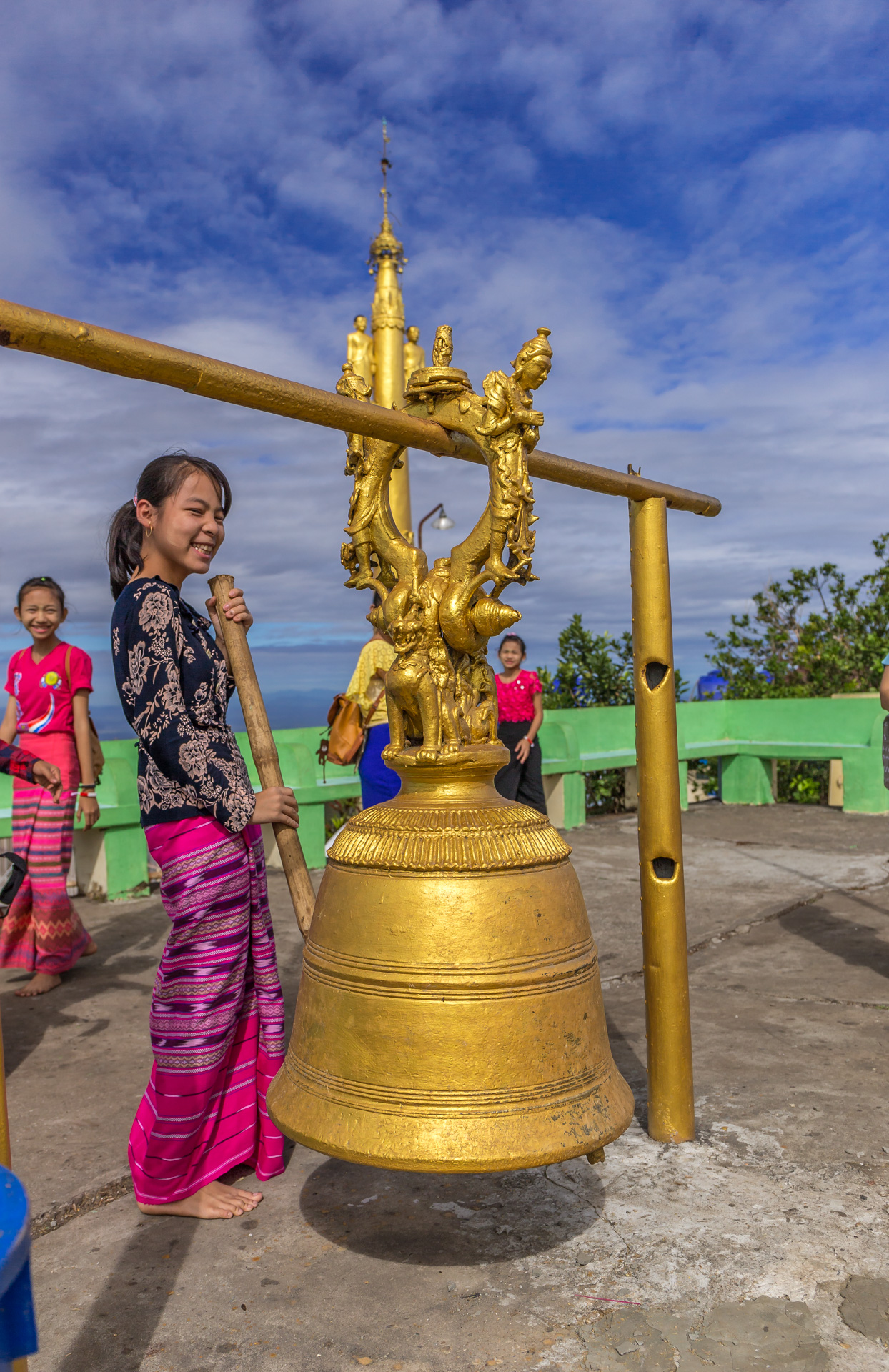 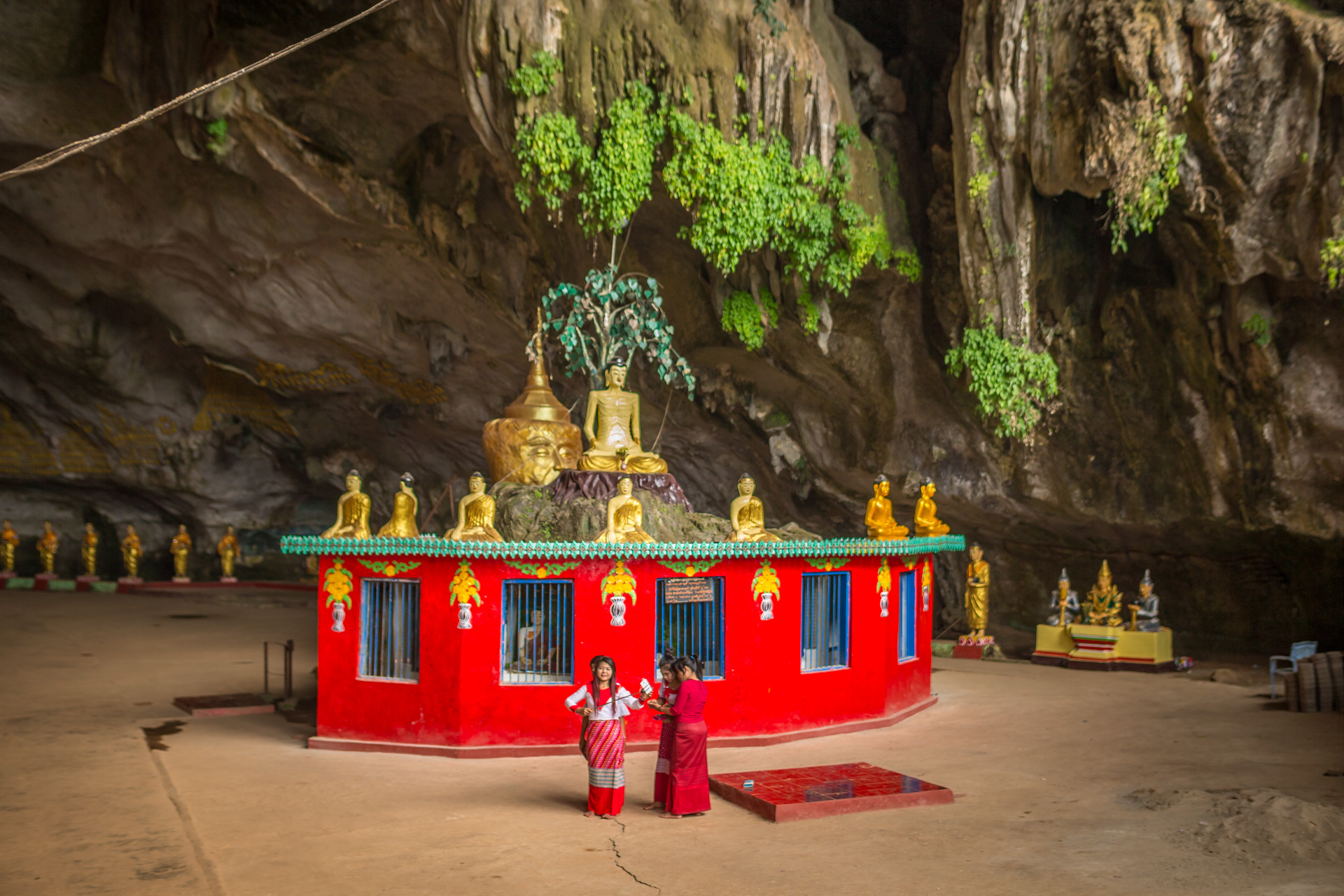 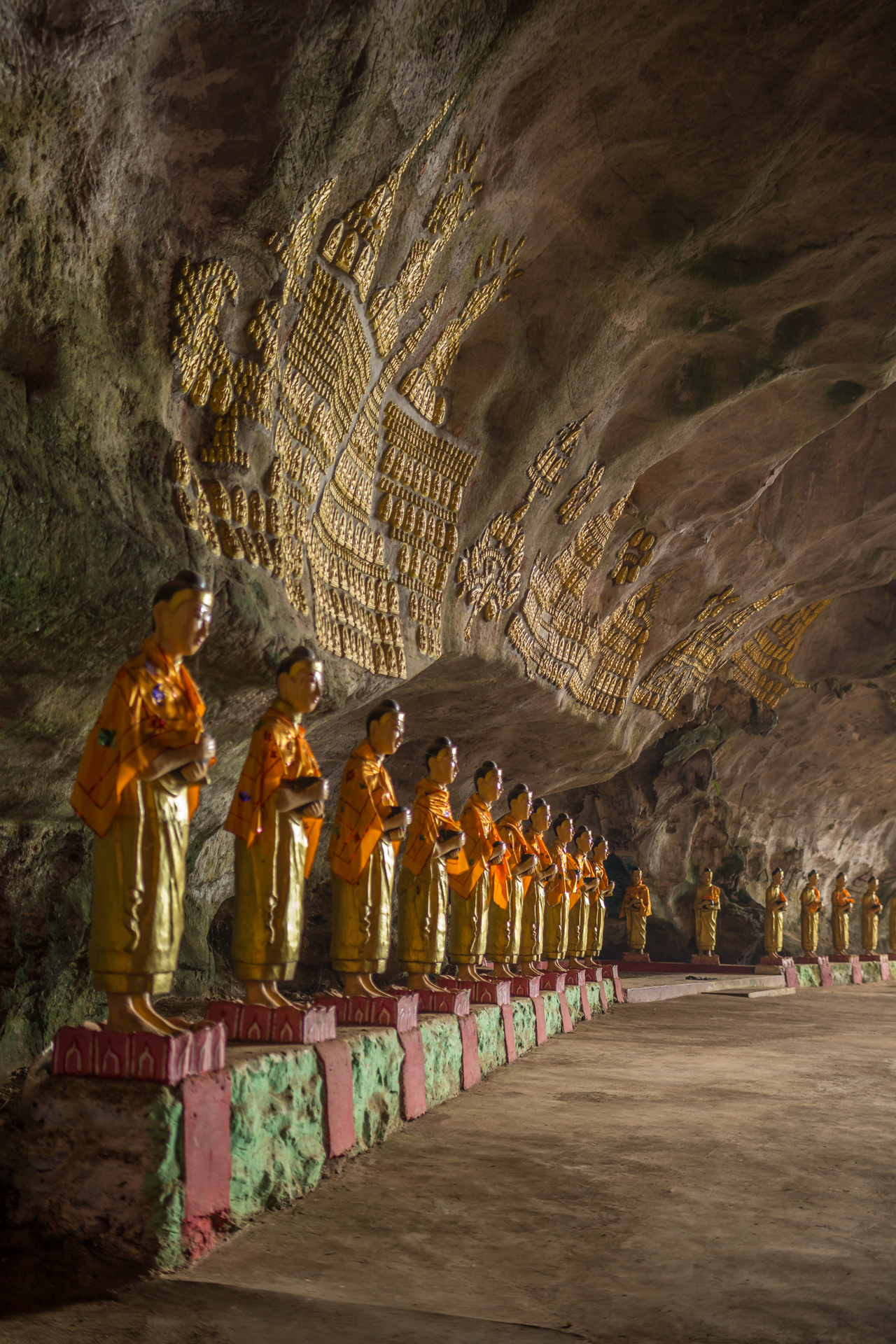 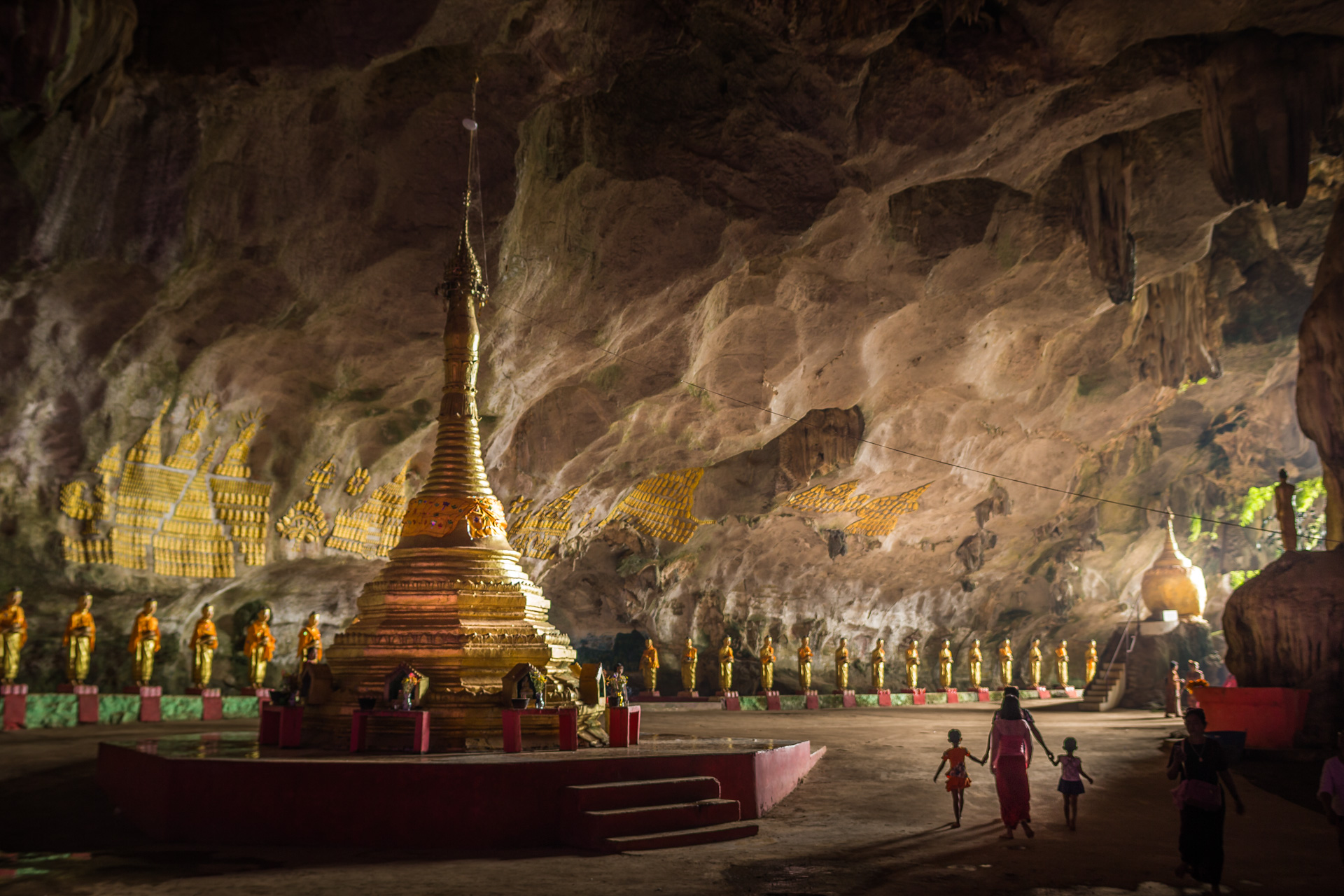 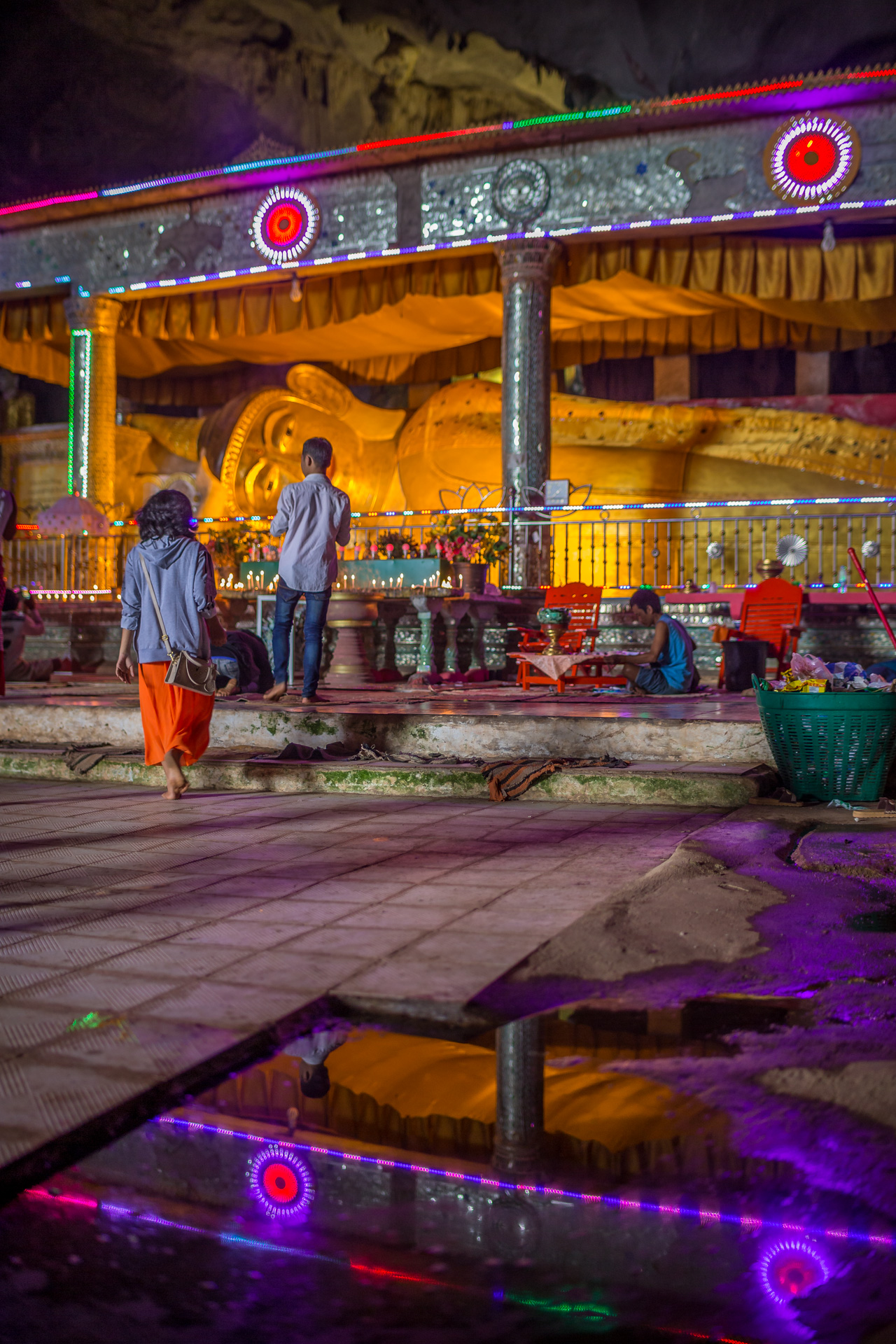 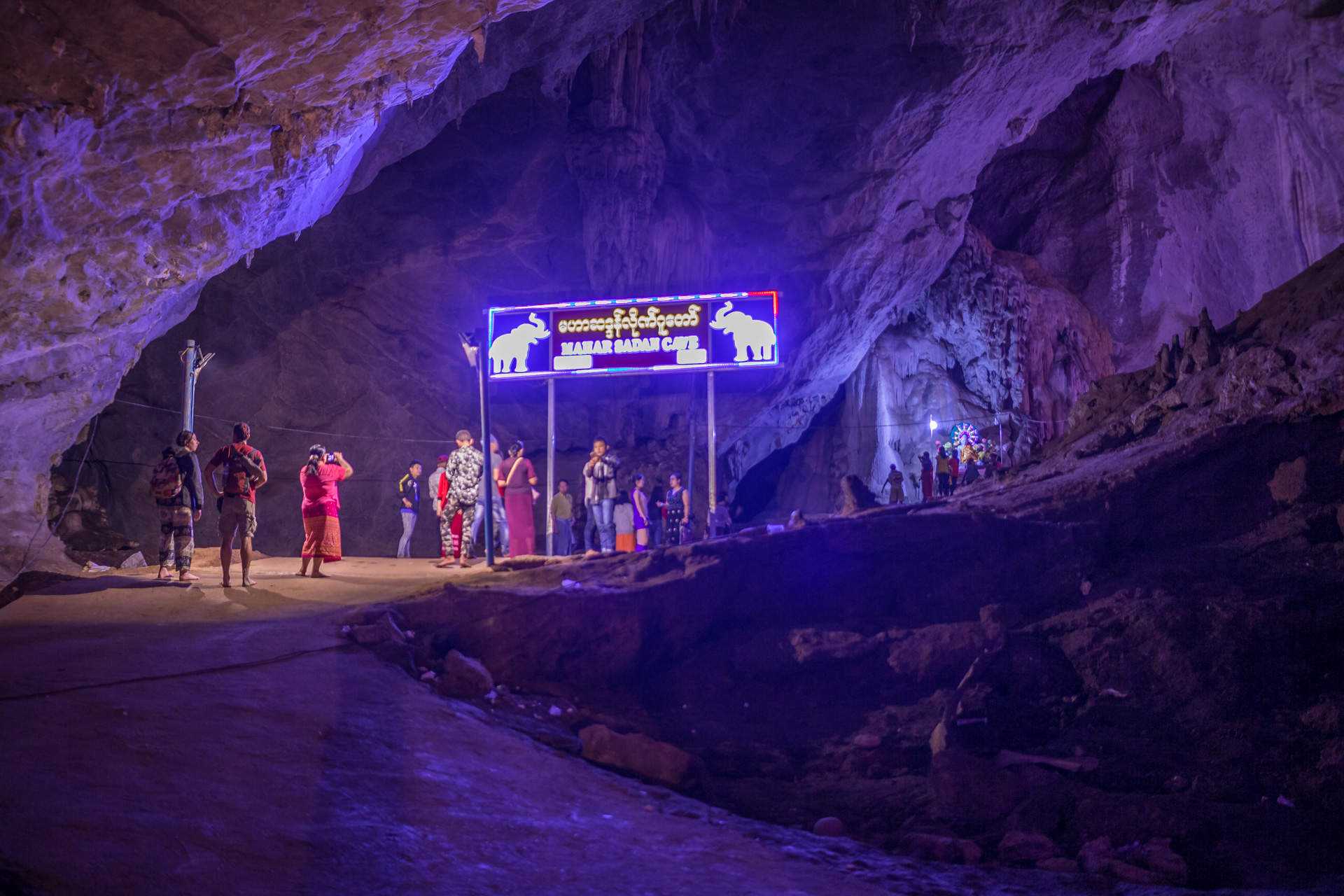 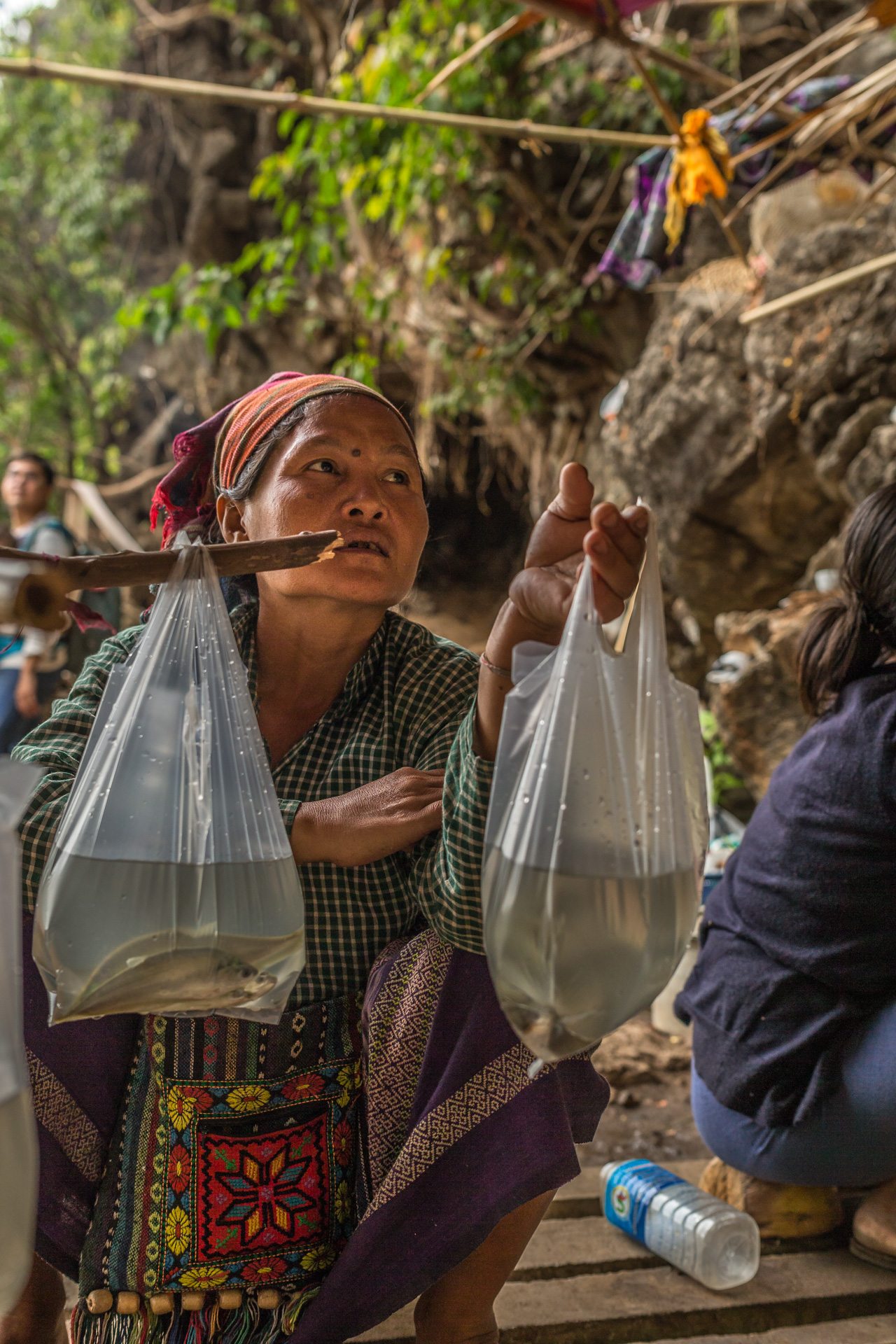 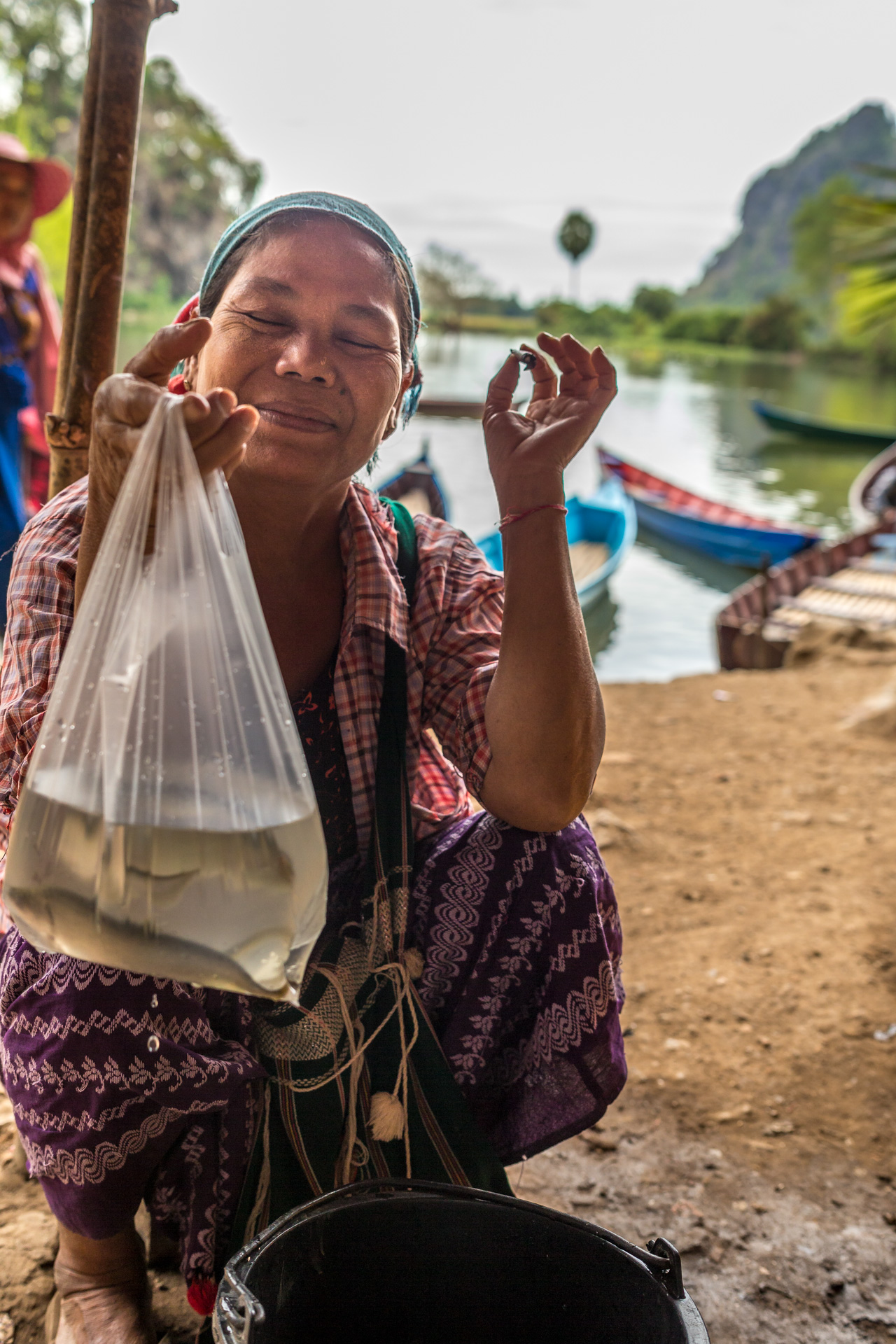 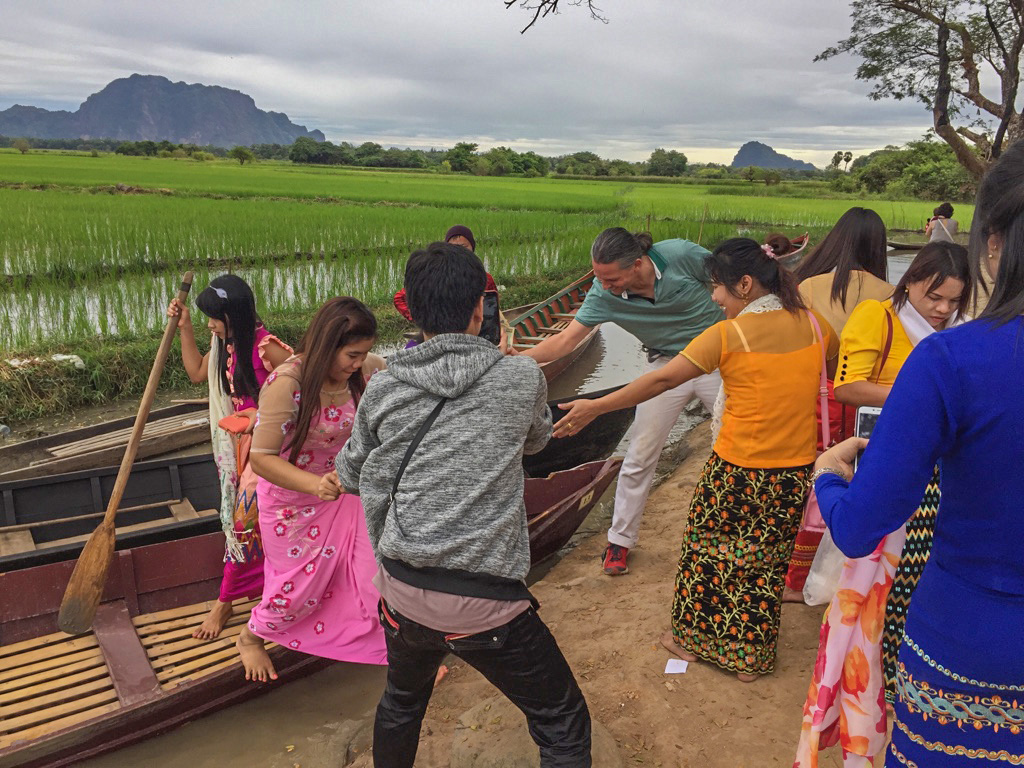 Early start for us – 6.30 Breakfast. Typical breakfast dish here in Myanmar is Fish Noodle Soup. Something we tried but passed for fried rice and eggs. The sun was just rising and we packed some drinks and a light snack. Mt. Zwegabin was our destination.

A pagoda perched high on a mountain top, and this time there were no trucks to carry us up. We had to do it the pilgrim way and go by foot. 650 meters in altitude does not sound much, but what nobody tells you that it’s 650 meters just stairs. And we mean, just stairs. Small steps, big steps, wide steps, narrow steps, thousands of them. How can such tiny people build so giant steps?! It takes a good 2,5 hrs until the top.

We were drenched in sweat when we arrived up top. And the sun was not even strong yet. No wonder there is hardly a big traffic going up. Amazingly the women who made it up here were in their Sunday finest. And why were they not sweaty? They climbed the same way as we did in little slippers but looked so poised.

So many times, this day, we had our role reversal: we were the attraction, and they were the tourists. If we charged for pictures our Myanmar travels would pay for themselves ;o))

It took us a good hour to dry out again on top, wandering barefoot through the courtyard with a beautiful golden stupa and enjoying the view on all sides. Each ridge top seems to have a small white or golden pagoda on top. It really looks very pretty. No pagoda would be complete without Esther’s favorite critters, but this time they were very polite, they pulled on Chris’ trousers politely asking for food. And as none came, checked whether an abandoned Coke can still had some sugar in it. The monkey knew exactly how to empty a can….

To Alaska and Finn: we have to confess that cans of coke are our sugary treat every day here…

After walking down (we still have sore calves! …) we headed to our next destination, the Saddan Cave. This cave is the largest one and it’s actually a series of 3-4 caves strung together until you get out at the other side of the mountain.

Due to frequent power outages, we brought our torches but ended only using them to light the thousands of bats on the ceiling. Here we had our first encounter with a magical first cave with a stupa in the middle and when you turn around you think you are in Disneyland. Blinking, flashing neon lights, Buddha statues with light organs, illuminating elephants etc. really not something you expect in a holy place. But this is Myanmar and people apparently like it.

After having followed the neon illuminated path to the other end, a spectacular view reveals itself onto a beautiful lake. Little colorful boats are waiting to ferry one back to the cave entrance.

Burmese love fresh food. So fresh indeed that their Food-to-Go takes on a new meaning: living lake fish in a plastic bag – just grab one and go! Obviously it is still more lucrative to sell to locals than to tourists.

Piled into little boats we were rowed back to the beginning. A boat full of very pretty Burmese girls could not stop giggling at us and Chris, the gentlemen, of course helped them out of the boat. Just to pose for yet more photos with the locals.

Last stop for the day was a nature spectacle that occurs every day around dusk. Linno Cave is known to house 1.5 million bats made up of 4 species.

All of those 1.5 million bats fly out in a matter of 20 minutes. The sky turns black and the wind really picks up. It’s amazing to feel. Birds of prey already circle above ready to pounce. Drummers try to keep them away, but a few always catch a good meal of bats nevertheless. The noise is intense and the stream of bats flying out seems endless at first. We are sure this is one of our highlights of this trip. Even our driver Ye was pretty amazed by this magnificent spectacle, as he saw it for the first time, too.