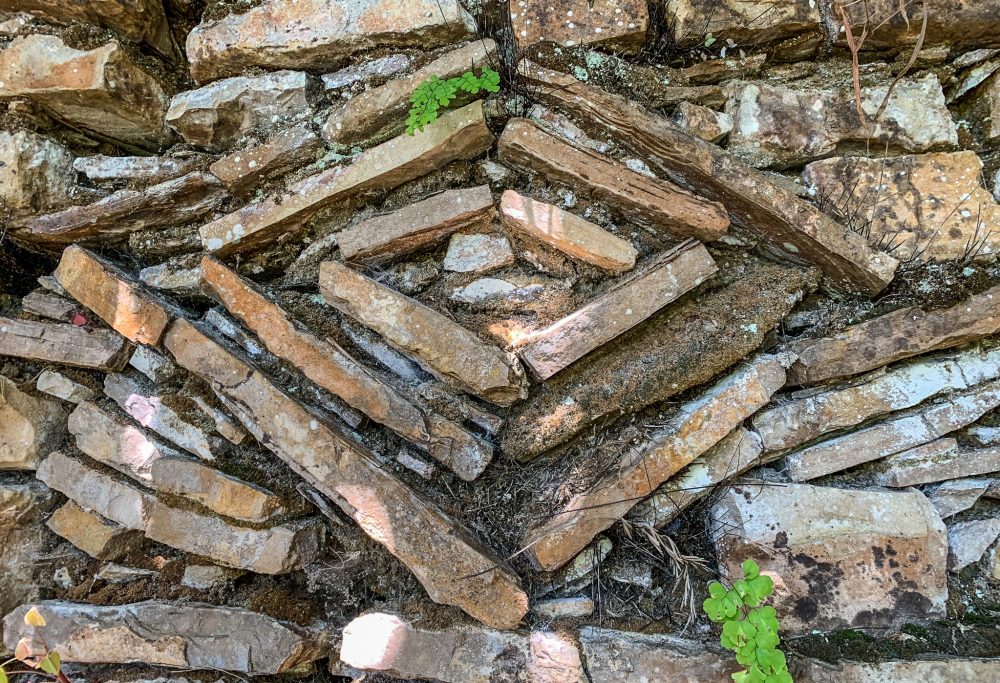 Since we are travelling in a big group we’ve decided to introduce guest bloggers (as we’ve introduced guest photographers). Today Leslie is our guest writer.

After a full day of rest from our Los Chilchos hike, we wanted to visit some well known ruins close to the town of Leymebamba. We hired a car and drove up the Cajamarca road for 30 minutes or so and then up a narrow bumpy (the usual!) dirt road. We were hiking with Xavier of course, the most knowledgable self taught historian in town.

We start down a cow path and very shortly are walking in high altitude jungle, palm trees scattered to the right and to the left. Xavier starts to point out the circular stone bases of what was once a Chachapoya village called Cateneo.

These ruins most likely dated back to the 13th or 14th century although no one has done any research or excavation on this site.

I asked why and Xavier explained that the process of obtaining permits is lengthy, expensive and difficult. As a result, many ruins like this one remain in a state of mystery and slow decay. The stones fall, the jungle creeps over the walls and cattle graze in and amongst them.

From Canteneo we hiked to another site called La Congona. This site was higher up the mountain and contained what Xavier thought to be important ceremonial structures, with beautiful detailed stone friezes on the upper portion of the circular walls.

These were impressive indeed, the patterns mesmerizing, and I could not help but wonder how magnificent these circular stone structures would look complete with the thatch roof and stone stairways that lead to each entrance. We were informed that the area we were hiking in had many more ruins close by and that this may have been an important location in the region relative to organization and religion within the culture.

It is known that when the Inca Empire came along to conquer the Chachapoya, it actually took close to 100 years, so fierce were these people. Yet so much is still not known about their daily existence as resources to investigate are so limited. So for now their secrets remain buried under the jungle vines and trees.

Our day continued with another visit to the Leymebamba museum – but this time we were to be allowed in the mummy room!

But first we had to get there and ordered a mototaxi or in this case an original Bajaj car + a mototaxi. How do you fit four people plus driver in a Bajaj which is smaller then a smart?

Well, you do. Only that the Bajaj didn’t make it all the way to the museum due to some ‘gas problems’ and we had to call another taxi for us four.

But eventually everyone arrived safe and sound at the Leymebamba museum.

We were also surprised to see a group of Harvard students visiting there with Professor Gary Urton, one of the most knowledgable archeologists of the Inca and an avid researcher of the Khipu. The Khipu was the instrument by which many cultures, including the Chachapoya, kept records. It is a series of many strings tied onto one main string, and was used as a counting device. This gem of a museum has three of the most interesting Khipus ever recovered. They were found at the Lake of the Condors along with the 200 plus mummies that were rescued after being nearly destroyed by looters.

And still this day was not done! We finished with a visit to our long time friend and guide Sinecio’s house. We were served tea and humitas, a local traditional corn based tamale with meat inside, steamed in banana leaves and served warm.

Finally back to La Casona, we ate (again) and packed for our bus trip to Kuelap the next day, but not before we were asked to give a short talk to all the Harvard students about our non profit work in the area. That’s what I call a busy day!