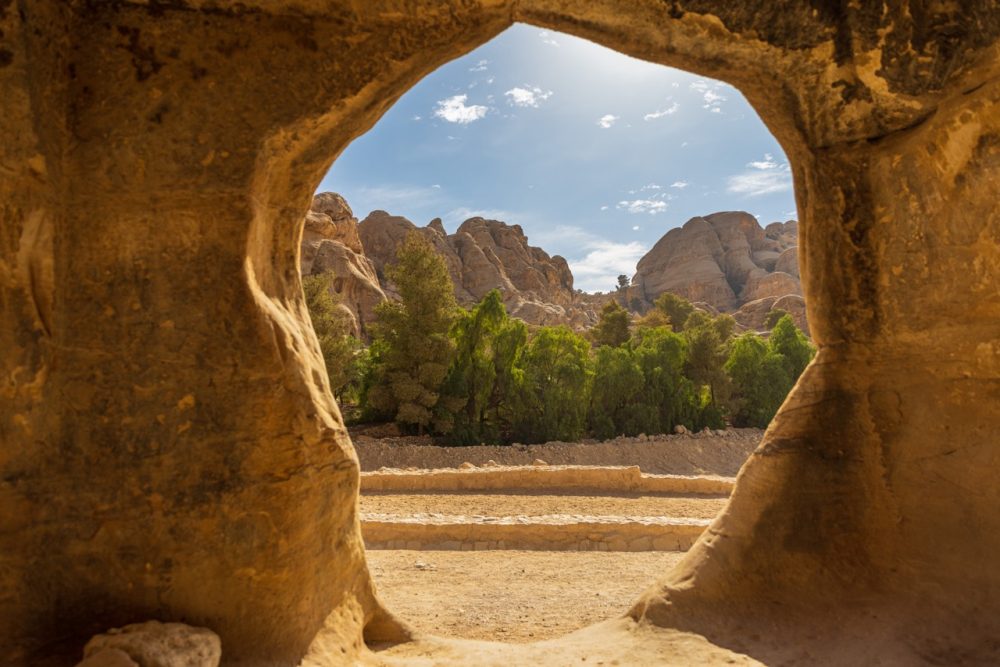 After we left Amman around 3 PM we drove to Madaba, somewhat south of Amman and the capital of Mosaics. We visited the St.Georges Church, famous for the oldest known Mosaic map of the region and the holy land.

Mosaic craft can be seen everywhere in Madaba . Several archeological sites and churches display beautiful art inlaid with thousands of little stones. Other than those few churches and sites and a nice old town full of souvenir shops, Madaba was a friendly but otherwise unassuming city – but as the night droped, we saw amazing colors in the sky which helped forget the 1000 shades of grey.

Luckily ATM’s are everywhere so we could fill up on Jordan Dinars (or JeyDees for short). Jordan ist not a cheap country and while some spots are really inexpensive, others carry same price tags than at home. Fitting to the town we stayed at the Mosaic Hotel which was quite good and central.

Our riding group was suposed to all come together here and meet the next morning to start our journey together for the next eight days. Turns out our group consists of ten riders, six French , three Germans and one swiss. As always, it’s 20% male and 80% female.We packed our bags into two minivans and set out for Petra, one of the highlights of this trip.

Petra is _the_ number one archeological site in Jordan. It dates back to 300 BC. The Nabathean were a mixed tribe, stemming from Bedouins, farmers and brigands and they built the most unusual city in the middle of rocky mountains and canyons. Nearly invisible from the outside, there are three entrance ways to ancient Petra.

We took one through a most narrow canyon which, after are neverending walk of 25 minutes, opened up on a small plaza to reveal an astounding tomb. Dubbed ‘the Treasury’ this imposing 15 meter high facade that looks like on a US Dollar bill of the US treasury, this is actually only a few meters deep. Enough for a burial chamber but not fitting in more than that.

In this steep walled valley there are hundreds of tombs carved into the walls, some larger, some smaller. What an unusual sight in the middle of the desert.

Once the canyon opens up more antique temples and grave sites are revealed. This city was big in it’s days, up to 100.000 people lived here at one point. Regulary banquets were celebrated inside of the tombs to honor the dead.

As there is no lake or immediate source of water in Petra, a sophisticated system of cisterns to catch and collect rain water as well as pipes from higher up wells can still be seen in parts. We walked for at least four hours in and out of the ancient city, always dodging locals that are hard selling donkey rides, camel rides, buggy trips or want you to show you the way up to higher viewpoints up on the steep cliffs for a few dinars. Even though we felt that at least at the treasury was crowded with tourists this was far from the usually 20.000 visitors a day, that Petra used to have before the pandemic. That is why, for the moment, you seem to have a 1:1 ratio of Petra locals and guests.

Most of those so called guides looked straight out of a pirates of the caribean movie. Black curly hair, eyes lined thickly with khol, the arabic version of eyeliner, headscarf and a swashbuckling attitude… we sucessfully dodged their advances to sell us a climb or a ride. This ride, by the way, is included in the ticket – but you should agree on the tip before you mount one of those. Around 5 JD should be more then enough. But again, we were not interested.

After all we have six days of riding coming…. As a group we came together nicely, no one there that is a fuss maker. We are both happy to polish our French again, but after a day of switching between English, German and French our brains are fried.

So we made our way to Aqaba, a nice town on the red sea and checked into our hotel there. After so many hours in fresh air and sunlight, a meal, shower and early bed time sounded wonderful.