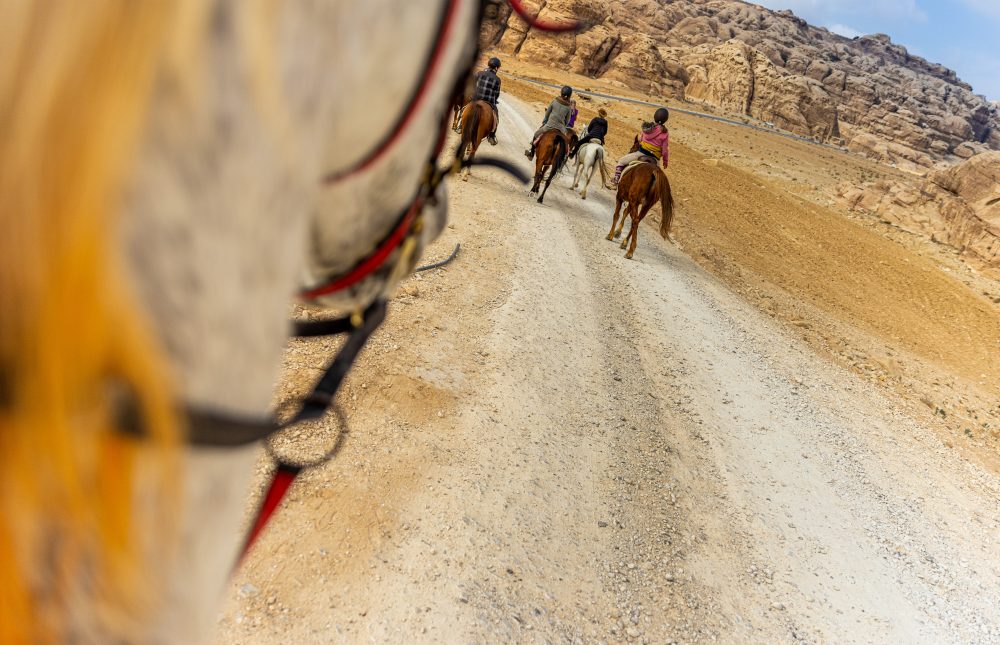 Today we finally were riding our horses for the first time. But as we learned early plans change often. The weather forecast predicted 4 days of rain coming from the North and that would mean the original date for little Petra would have fallen in that period with Little Petra most likely closed. Obviously tourists have drowned at Petra in the past. So plans were changed and that riding day up North was put to the front of the trip while the weather was still nice.

We drove all the way from Aqaba to little Petra again, to finally meet our horses. As predicted those were Arab Berber mixes, some quite small, others medium size. All rather thin but well shod. The saddles were a mix as well. Everything from Western, to Endurance to English saddles. We were mostly matched by weight not necessarily by riding skills. Small riders to small horses and larger riders to the larger horses.

Our first outing was just at a walk so it was difficult to really see if horse and rider fit together.

Chris was matched with a large grey with henna colored mane and tail which he really liked. He first thought its name was Kabir – until he realized, that Kabir means ‚big’ in arabic.

Esther got a smaller chestnut mare which was OK at a walk but a bit annoying at the canter which she only found out later. We rode at a walk for about 3 hours in an area that very much looked like big Petra, very arid and dry.

Then we stopped for a nice picknick lunch and handed over our horses to two grooms who then waited until the horse trucks arrived to transport them to Wadi Rum. We were driven to an unassuming outpost in the desert on the foot of rocky hills, which was a much smaller operation than big Petra.

We walked through some gorges to a lovely open space where we saw similar Nabathean buildings then in Petra. Mostly facades of tombs but some converted into housing. It was much smaller than Petra but we found it more charming. We had the place pretty much to ourselves. Hardly any tourists in sight and we left some money with the locals for souvenirs as they must be hurting badly from the loss of revenue. They got many cancellations in because of the world wide Covid and Omicron situation.

We strolled through the valley, had some tea and were volunteered to try out some Khol – the Arabic version of eyeliner. On the way back we passed one of our horse truck which was an adventurous construction of an open top truck with high sides and only a flap in the back.

To load and unload the horses the truck needed to be backed up against a hill. Unfortunately on the transport Chris’ Horse got injured and did not make it all the way to Wadi Rum.

The night we are supposed to spend in our Bedouin camp with a nice local dish dinner with no alcohol. The evening before Chris and some others in the group had snuck out to a liquor store and bought some bubbly for New Years eve as in all of Wadi Rum, you cannot buy any alcohol.

So we drove to Wadi Rum Village and changed from our Minivan to two open top 4 wheel drives. In Chris’ car, the 10 year old son of the owner of the Bedouin camp site took the wheel. Obviously we wouldn’t be stopped by police here in the desert. In the dark at break neck speed we drove to our camp and had a hearty dinner in a big smoky bedouin tent before each couple retired to their little Bedouin hut for the night.