This time we’re in Jordan! 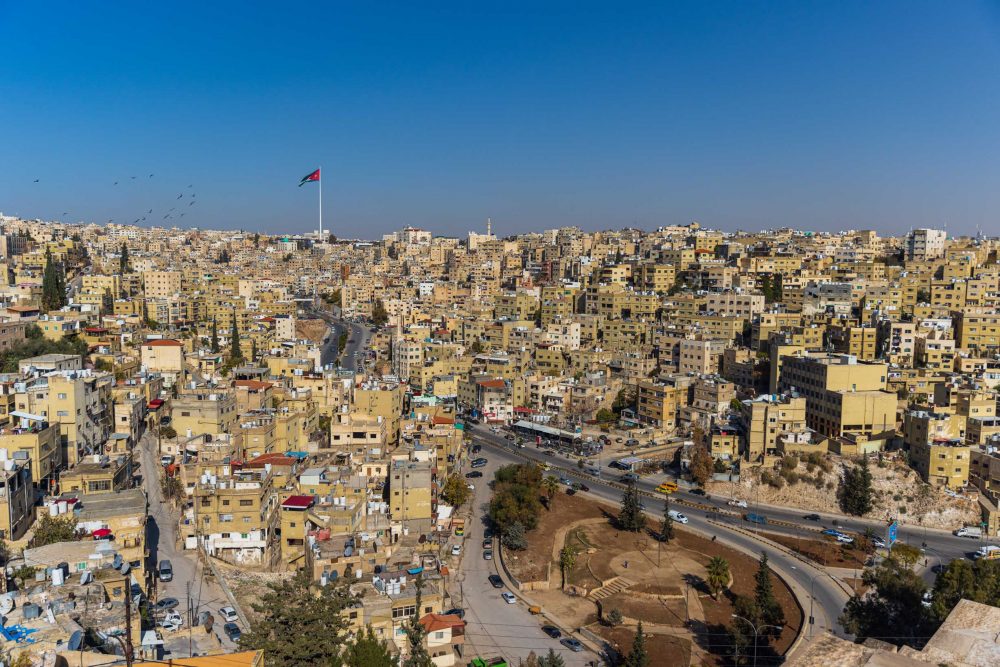 OK, this is a medley of our arrival in Jordan and the first day here.

Luckily Jordan did not close the borders to foreigners like Israel just did because of the Omicron Variant. We were good to fly after having received our negative COVID test results the day prior. Flying through Vienna was easy as triple vaccinated travelers, even though there was some paperwork to do first: You need your PCR Test no older then 72 hours, your triple dose of a EU certified vaccine, a locator form for Jordan and a prepaid PCR test as well as a health insurance stating it will cover for potential Covid-19 infection cost.

The flight was only 3 hrs 15 minutes but it did feel a lot longer. Maybe because we had 3 hrs lay over in Vienna which we spent in the decent Sky lounge.

The arrival in Jordan was smooth and super organized. De-Planing, straight to the Jordan arrival PCR test, then on arrival Visa formalities, straight to passport control and by then the luggage was already waiting. Another luggage x-ray and we were out in less than 1 hr and our driver was already waiting. First impression of Jordan: very efficient, very modern and very friendly people. Arrived at our hotel in the early evening we just felt the need to hang out in the local bar/restaurant for a small salad and drink. While the food and local beer was not extra special but OK, music wise we felt thrown back into a bad night club in the 1990’s where the DJ doubled up as a mixer and must have tried to string and blend as many cheap, mass produced songs as possible into one never ending music stream. We counted everything from Modern Talking, Bloodhound Gang, Vanilla Ice, to Rick Astley and Mr. President. One surprise was really that we walked into the restaurant/bar and then a wave of smoke hit you. We realized how little we are used anymore to be in a restaurant where smoking is allowed everywhere. Luckily we sat on a table a bit away from the heavy smokers. Smoking seems to be a national past time of many people here as well as Nargile (Shisha) smoking. We were lucky to find a relatively quiet yet central hotel in Amman.

The next morning after a nice breakfast with Hummus, Egyptian bean soup and omlett, we set out and grabbed a cab to the King Abdulla Mosque. Sandwiched in a fork in the road this impressive mosque is the only one that welcomes non muslim visitors inside. We were lucky to catch a time in between the six prayers per day: Fajr at dawn, Dhur, Asr, Maghrib and the Isha’a night prayer. Women have to wear a long black mantle which you can borow at no cost at the visitors shop for free (not without beeing offered a tea and a tour of the quite expensive ‘tax free’ souvenir shop).

Adorned in acceptable garb, we set out to explore the grounds and the inside of the mosque. It supposedly held 7000 worshippers ( in pre Covid times) but nowadays each place  to pray is marked on the carpet at a distance and only roughly 1200 worshippers fit in now. Barefeet we walked the soft carpet and admired the nice marble carved and inlaid walls. Light wise the mosque is not spectacular from the inside but from the outside it houses a bright blue dome made with shining mosaique stones. All in all it’s a fairly new building (1957) and you can see that.

Afterwards, we continued on foot through the streets. As Amman is built originally on seven hills, nearly every street is either going up or down. And there are many stariways for pedestrians cutting strigt up or down between streets on different levels. Traffic is busy but not as chaotic as we have seen it elsewhere. Yellow cabs are plenty and only ask with a short honk for your attention. While walking in the suq it was pleasantly warm but as soon as houses shaded off the sun a coldish wind made one shiver quickly.

We walked to the Citadel, an ancient roman fortress. On top of the highest hill in Amman, this impressive compound once housed a huge temple ( called Temple of Hercules) but today only a few pillars and the tiled floor remain. The 360 degree view from up top provided a great orientation and showed the sprawling vastness of Amman with it’s 3 million inhabitants. Apart from a few Mosques, churches and archaeological sites, Amman consists nearly exclusively of square, multi appartement housing blocks in a sandy yellow color. Wherever you look around, there is just one style, one height, one size apart from a few office buiding sky scrapers.

Wandering by the Roman theater, which in summer is still used for concerts we ambled into the old town center and dove right into the Suq. Vegetables of all kinds everywhere. and New ones we hadn’t seen before like an Egyptian potato.

Many of the vegetables and fruit we know were on sale and also big bags of spices of all kinds. We love wandering through those narow alleys , smelling the strange scents and listening to the shop owners loudly praising their goods.

We became very hungry walking through all that food and so we made our way to Hashem restaurant, a small restaurant tucked inside an alley that we never would have found on our own. A young man who turned out to be from Egypt led us there and for catching a meal with us helped us order food.

We had delicious hummus, Bean paste, falafel with freshly baked bread any french fries. Yes we were surprised too, here french fries seem to be served with many meals. After having eaten we needed to make our way back to the hotel for our Tour pick up early afternoon to Madaba. But that’s for another day….