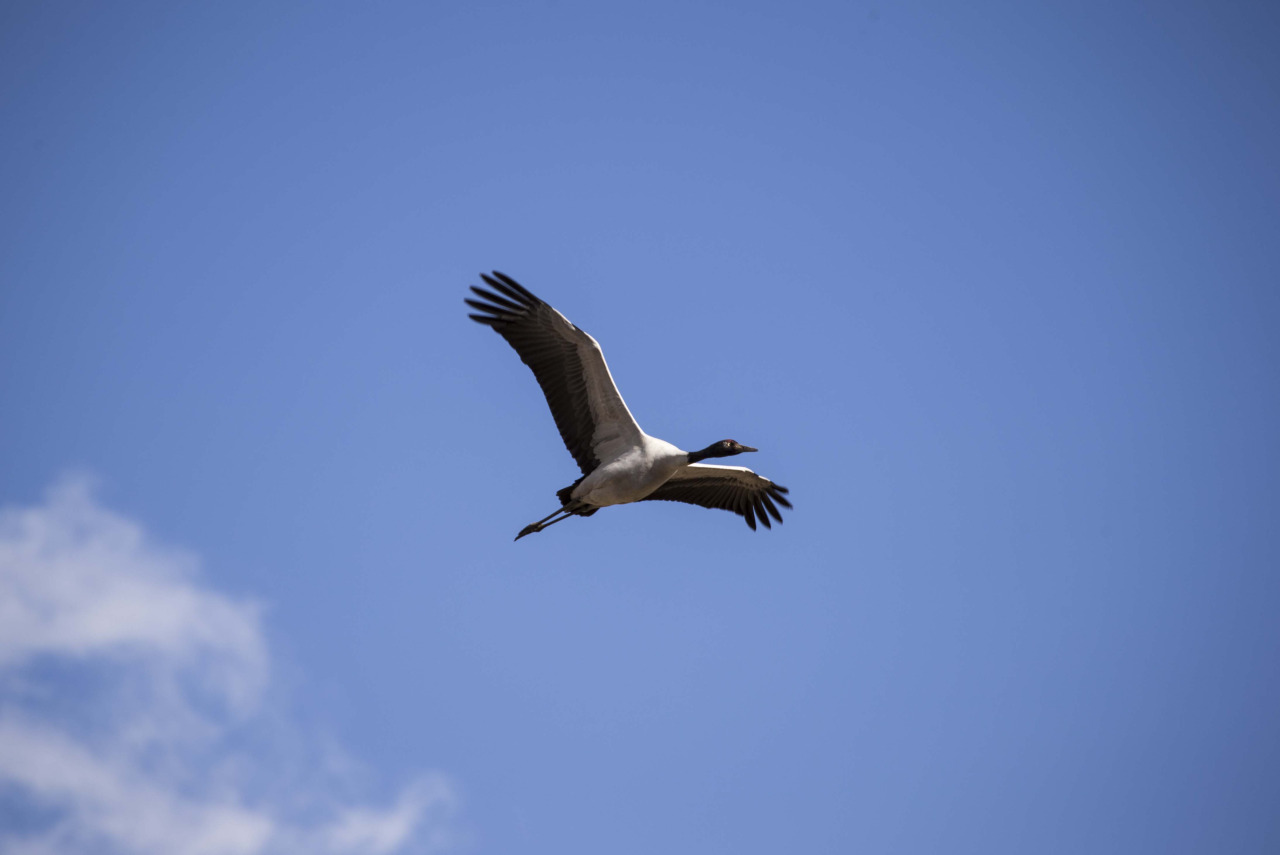 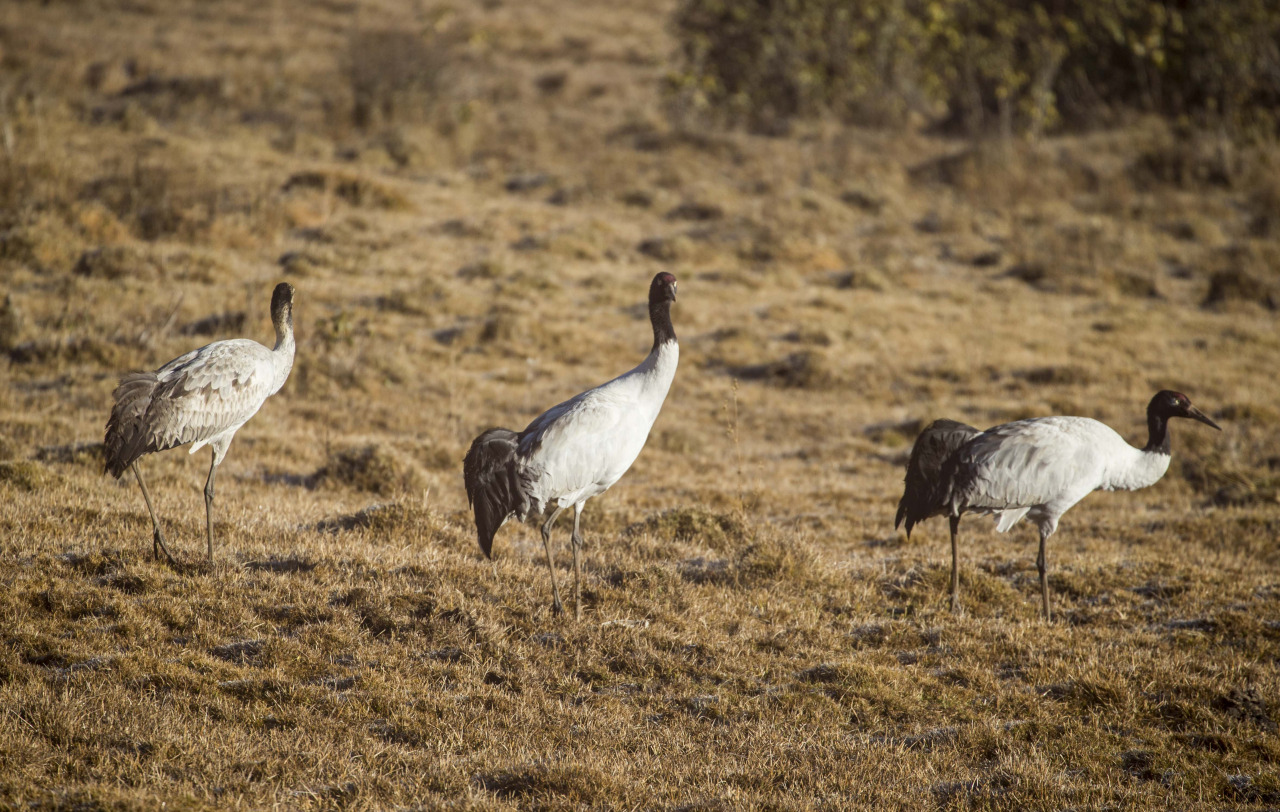 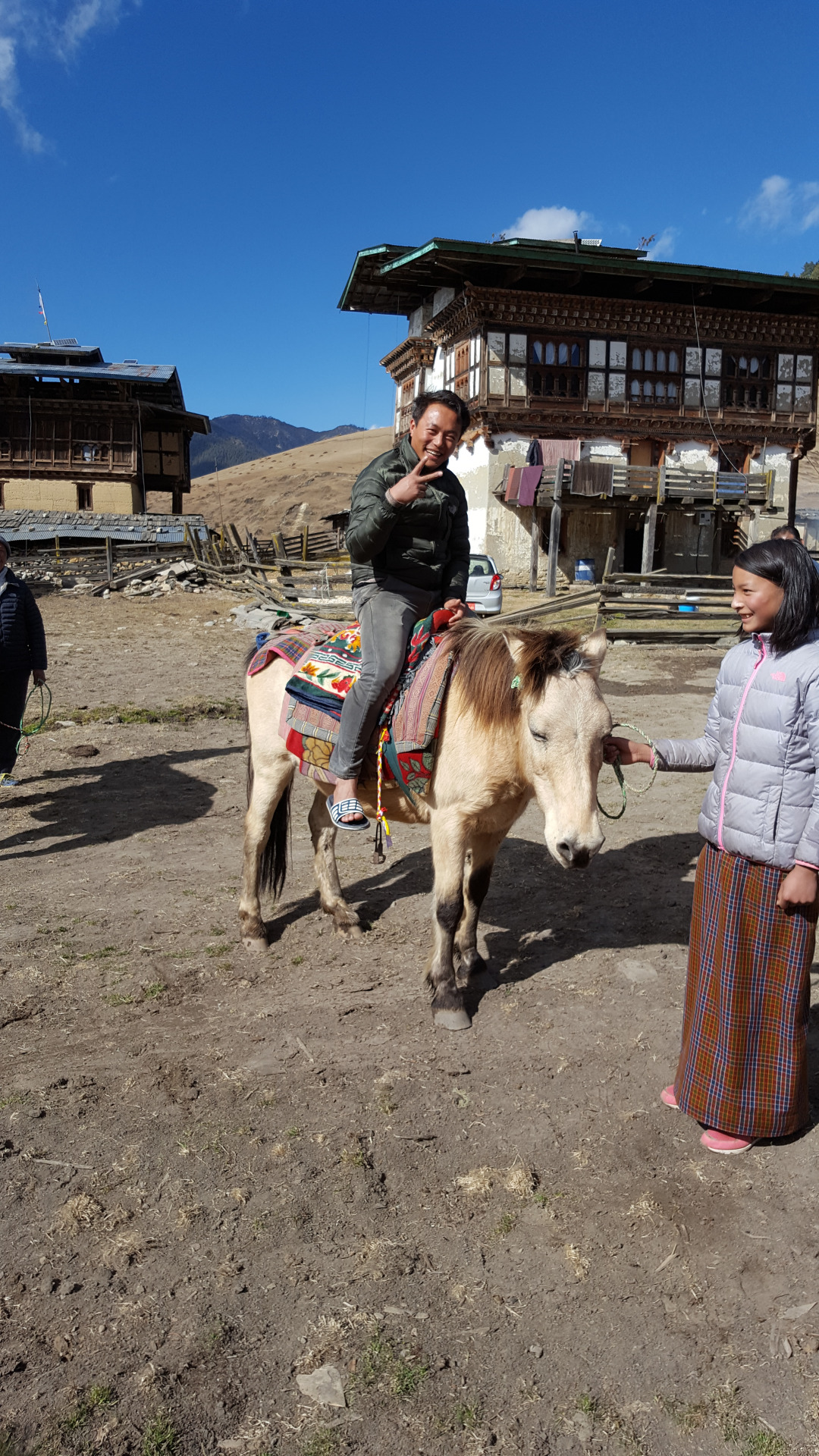 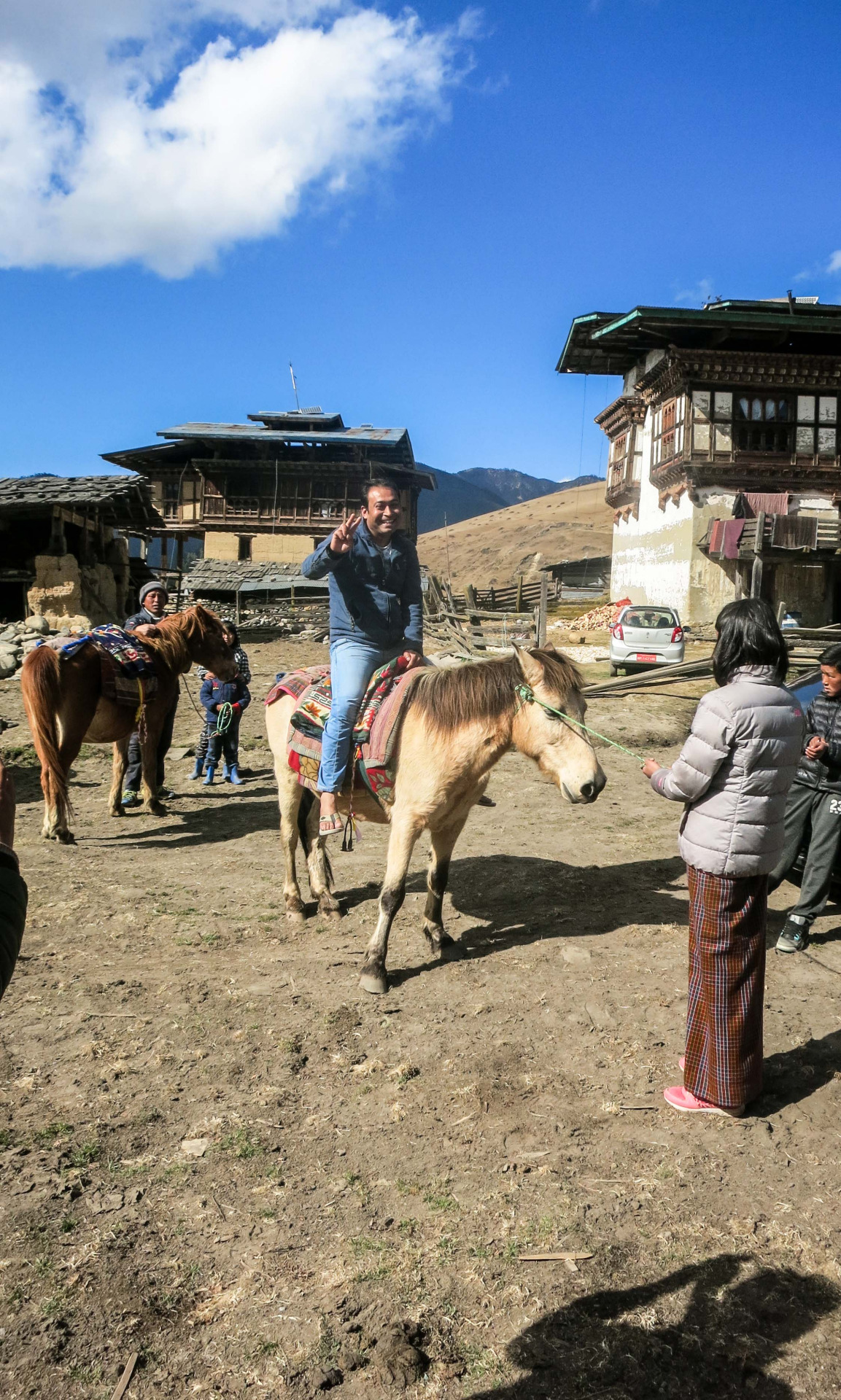 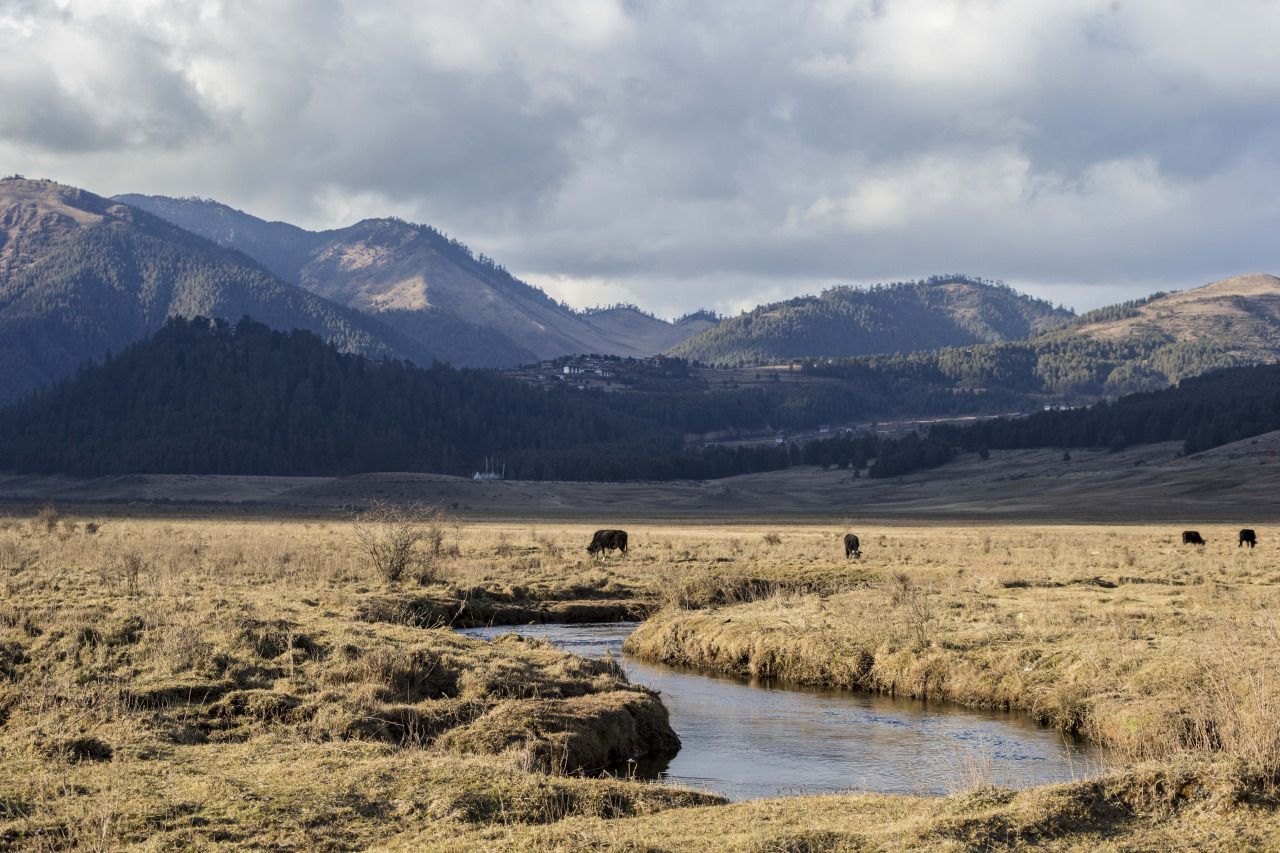 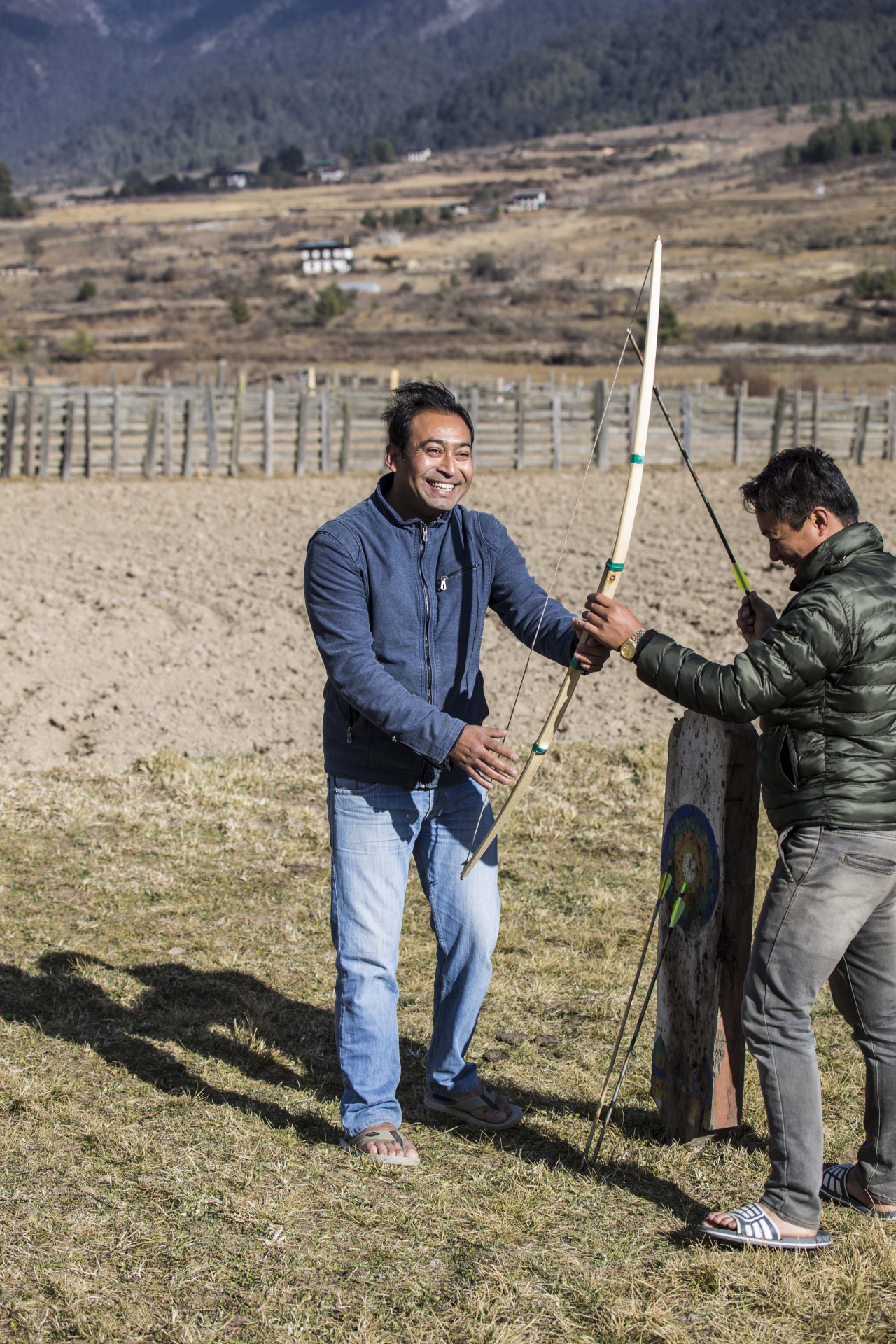 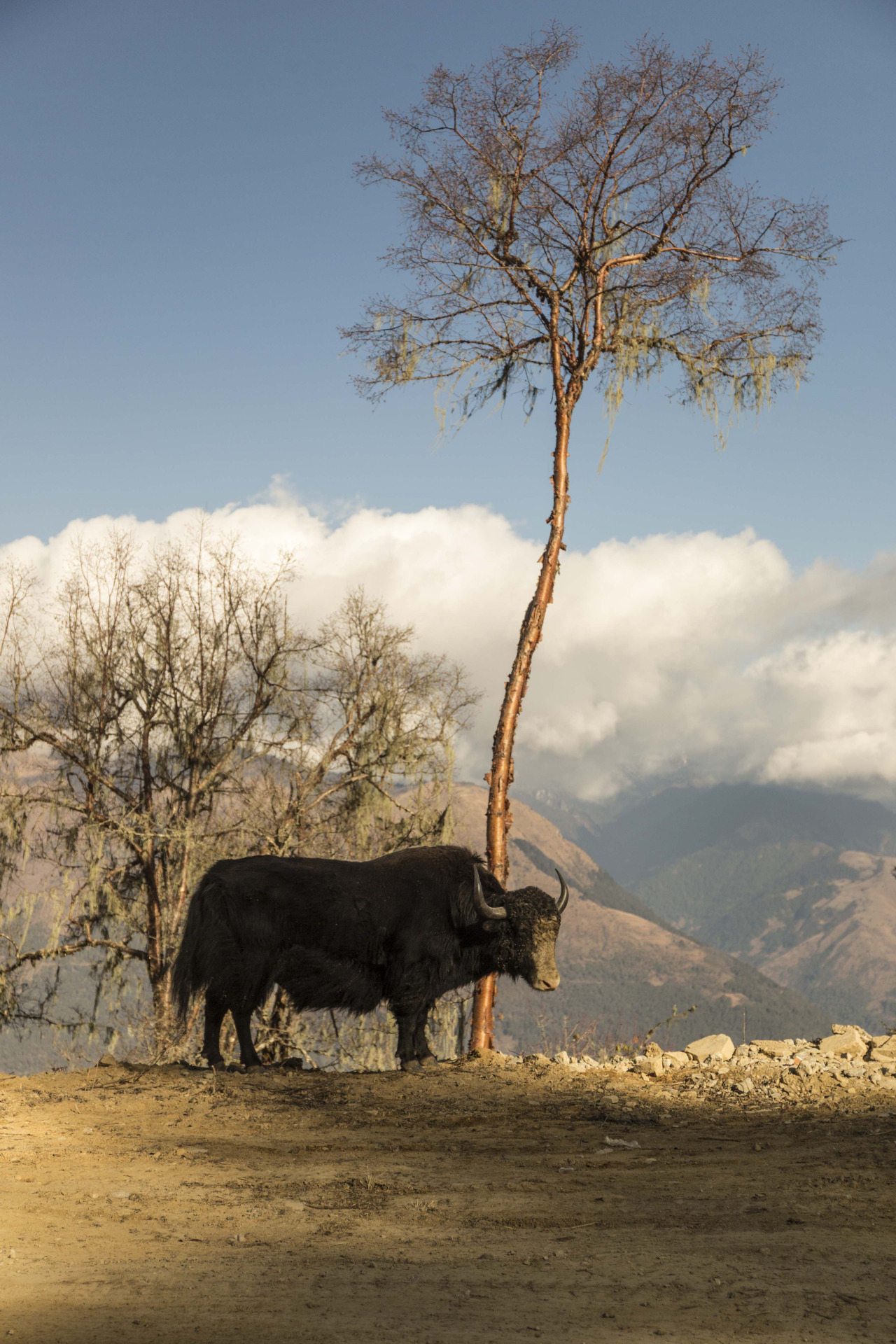 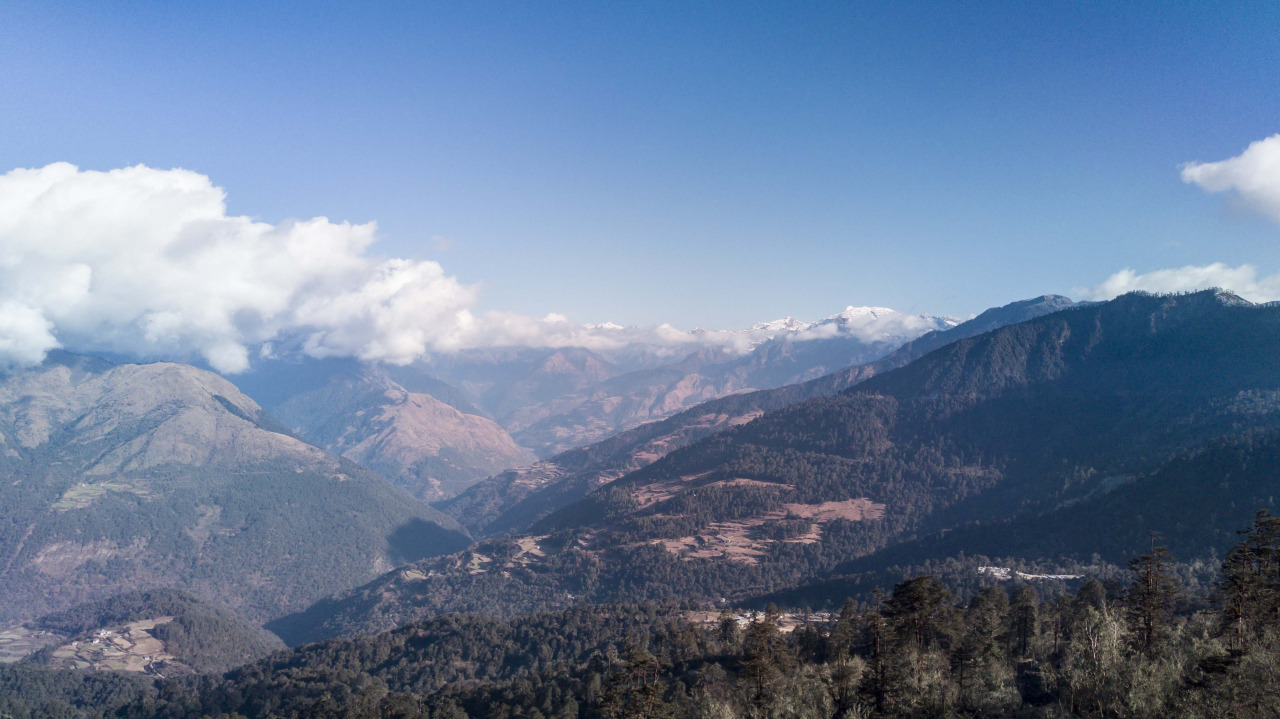 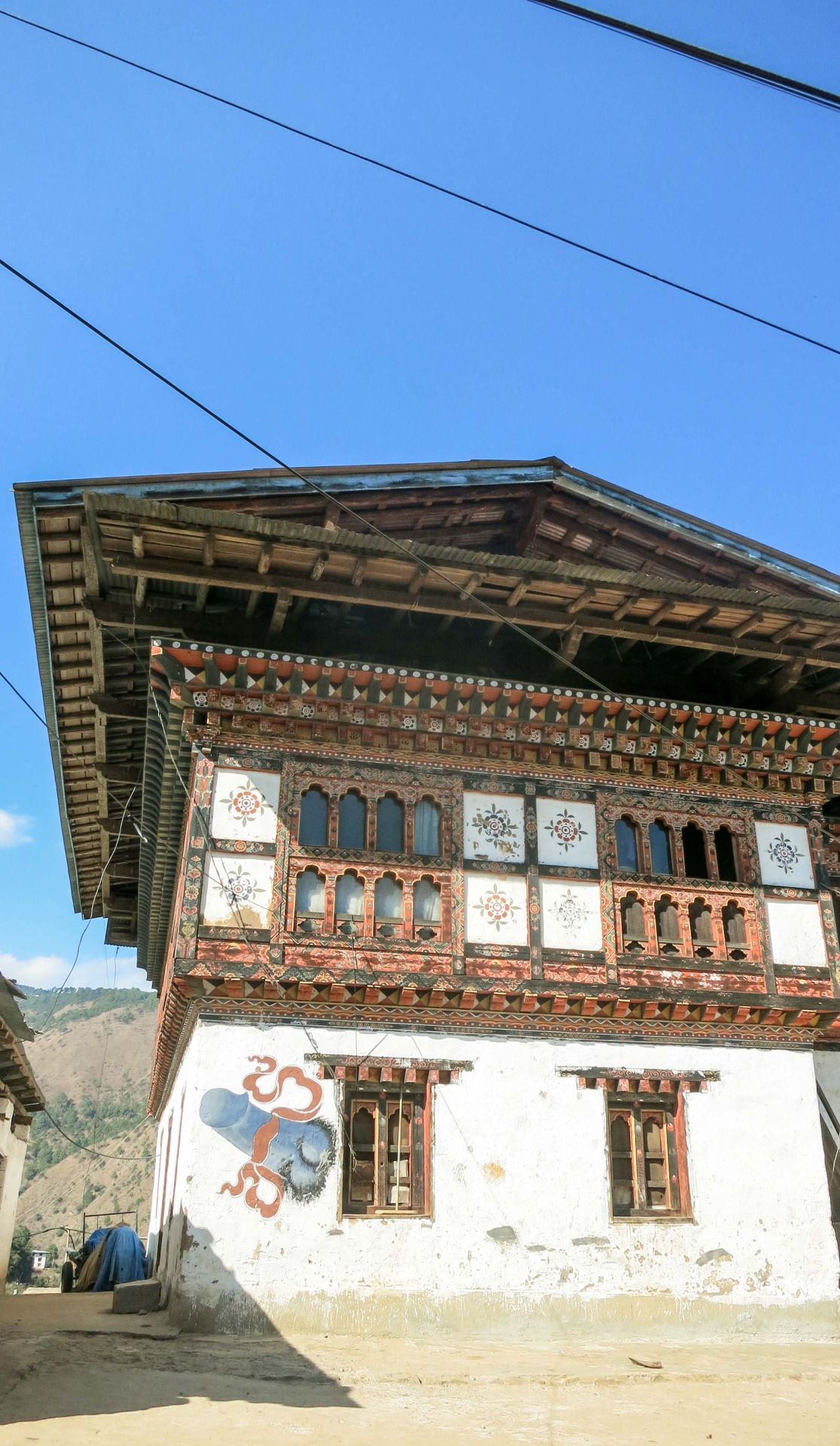 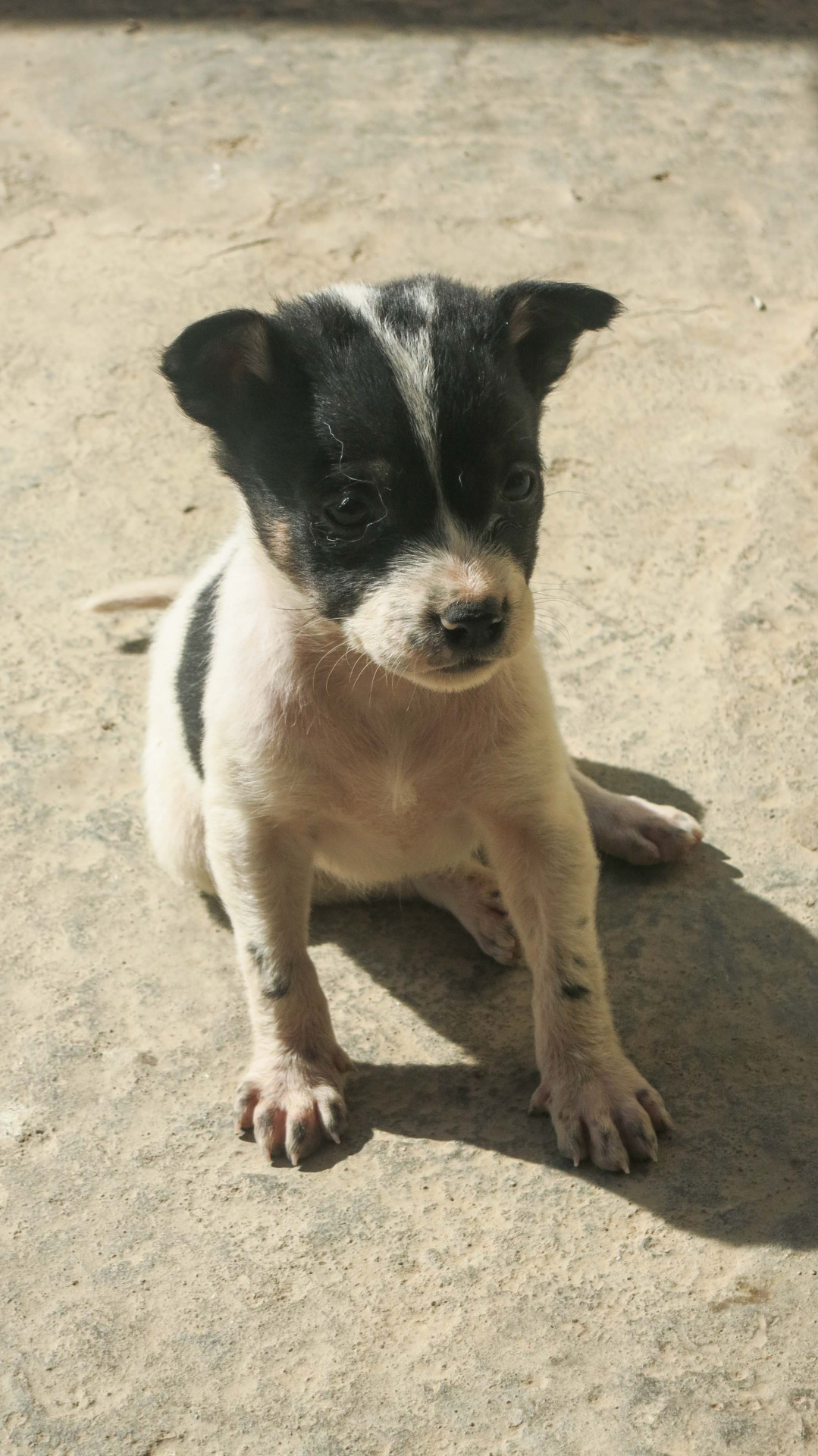 Waking up again to frozen windows (and we mean frozen inside!) and our breaths steaming white in the cold morning air, we enjoyed again a hearty breakfast of fried rice and omelette accompanied by black tea. Very yummy.

Today the famed black necked cranes, that come from Tibet to stay for the winter here in Pobjikha valley , have decided to land on the field in front of our farm. Those are rare birds that only live in this part of the world and are endangered through ever increasing civilisation that steals their habitat. Those elegant birds come here to feed and relax between November and March and then fly back to Tibet to bring up their young in the high valleys of the Himalayas.

Today we had booked another ride into Pobjikha valley and we made it clear after the first pony ride in Bumthang that we did not want to be led like little kids again. Turns out there were only two ponies again. Same deal. What did get lost in translation??? We decided this time it’s payback time and ‘forced’ our guide Norbu and our driver Govin to get on the ponies instead. Of course a great selfie opportunity that none of them missed. Have a closer look at their shoes and bear in mind the temperatures around 0°C.

The land of the free … tigers & leopards

We had a leisurely two hour walk through the beautiful Pobjikha valley, saw plenty of birds and got a sunburn! Never underestimate the sun at high altitudes. We were at 2,900 meters. Life here is a bucolic to watch as you can find it. Very rural, lots of agriculture and still lots of free land for the animals to roam. They even have snow leopards coming down from the hills looking for an easy kill of a calf. The government of Bhutan grants every farmer a damage payment in case a tiger or leopard kills one of their animals. Killing the predator is punished with a prison sentence. They definitely want to protect what they have. Nice gesture! So the big cats don’t get hunted, if it were not for the Chinese poachers that unfortunately kill just for greed coming in by foot from Tibet.

Archery instead of soccer

As a final activity at the farm, two of the family’s sons invited us to try out archery behind their house. We shot with a traditional bamboo bow and out the target at 1/3rd of the distance than normal (about 50 meters) we formed two teams (Chris, Esther and Govin being on one, Norbu and the two sons being on the other). The stakes were high: each of us put ten Nu in (that’s about 15 cents).  First team reaching five points wins. After missing the target most of the time Chris and Govin hit it twice and so the rag taggle team of foreigners won against the locals!

Saying good bye with a warm heart to the family (but honestly looking forward to the next hotel with heating!) we left Pobjikha to drive a few hours to Punakha, the former capital of Bhutan.

This drive led us across another pass at 3,000 meters but the view from atop was breath-taking. For the first time the sky was clear enough to spot the high mountains of the Himalayas. Some of those were in Bhutan, some in Tibet. It was a magical sight. So majestic and serene. Watching this beautiful panorama for some time, we heard some noises through the bushes.

Turns out we should spot our first yaks on this trip. We had always thought that yaks were black, long coated cow like animals. What I did not know is that they come in different colours. Some are even black and white mixed! There must have been a regular cow in there some time…

Those animals are domesticated and very calm unless provoked, then they can be quite fiery. Today yaks are mainly used in Bhutan for their long hair to make blankets and fabric as well as their milk. Also some treks still use them as pack animals.

Leaving the high altitudes behind us, we drove from 3,000 meters down to 1,300 meters and it got much much warmer. Heading to our destination in Punakha we made one last stop at a café in a little village we call “Phallus village”. It seems that every house, every shop and every souvenir had to do with the depiction of male genitals. Here in Bhutan, phalluses are a symbol of turning away greedy eyes and bad spirits. Therefore every other house here has a large phallus in all shapes, colours and sizes painted on it. This village takes this tradition further than others! The reason for this: They have a temple nearby that you should visit in case you are thinking about having kids.

I am convinced that Bhutan must be the only country where the phallus painter is a respected, full time profession (remember Robert Lembke?).

Leaving this little village sadly without the little adorable doggie (as you can imagine Esther would have collected dozens of puppies and Chris dozens of little kittens by now to take home!) we were very much looking forward to a hot shower and warm room for the night!