Cayaking through the rice fields 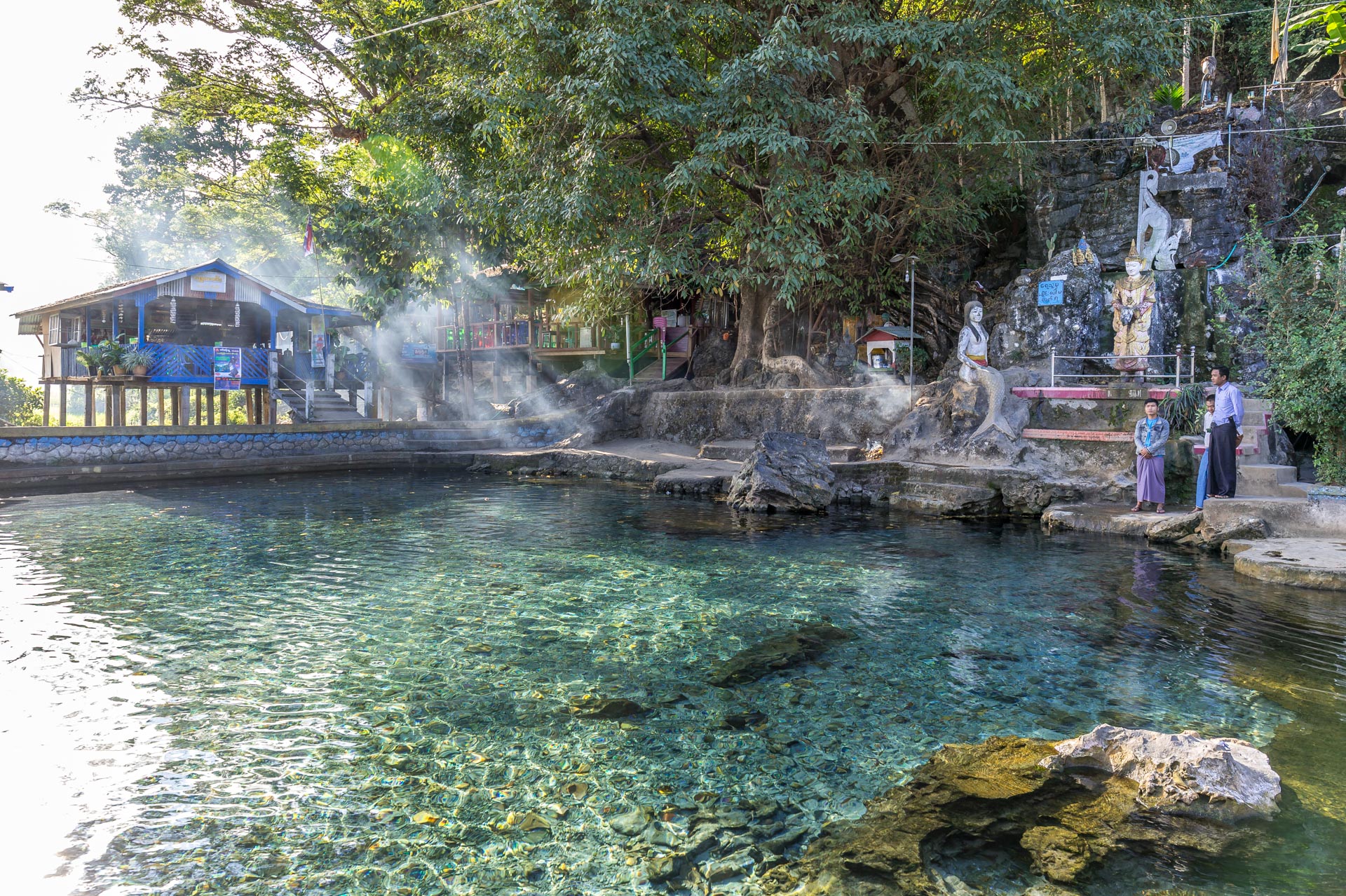 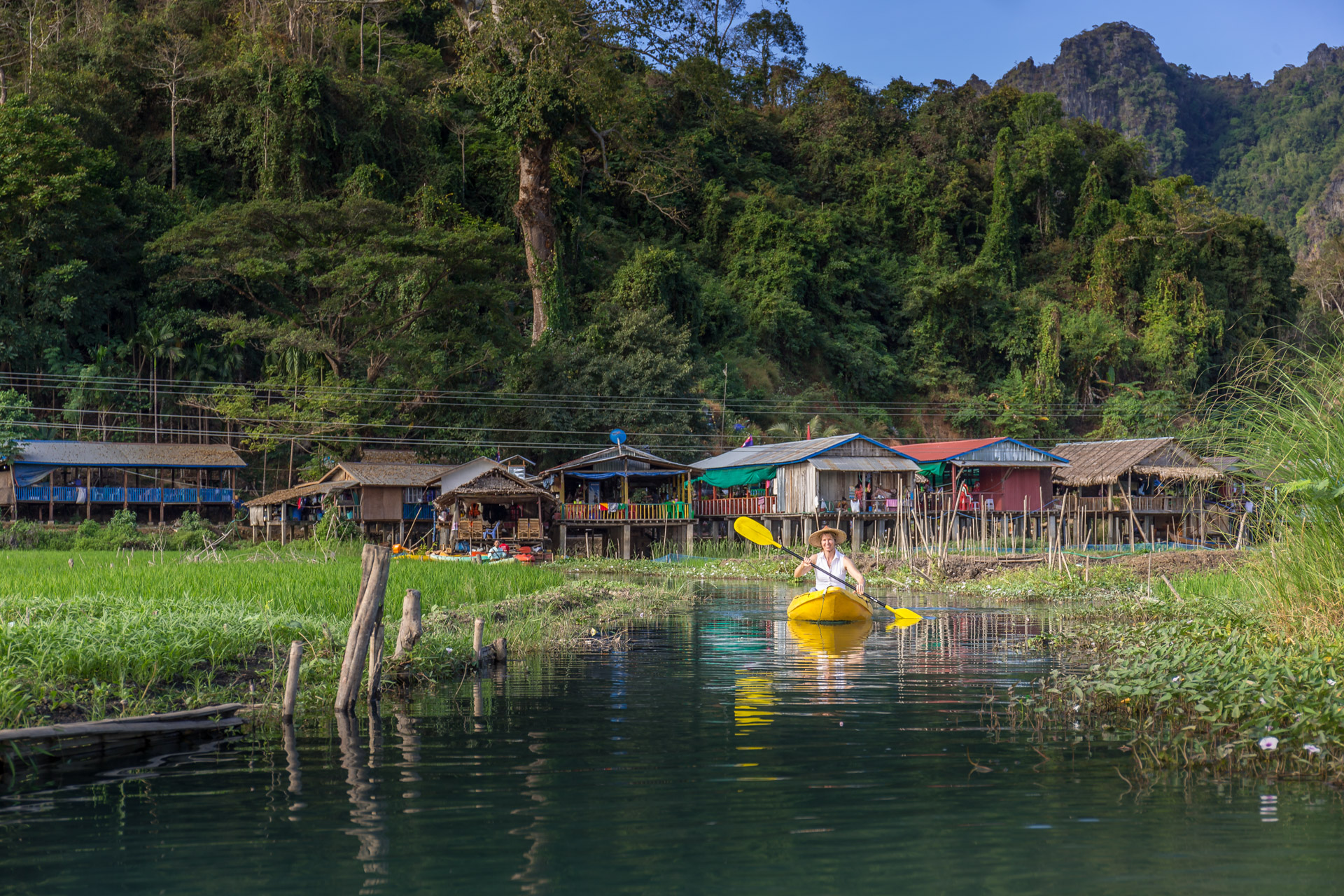 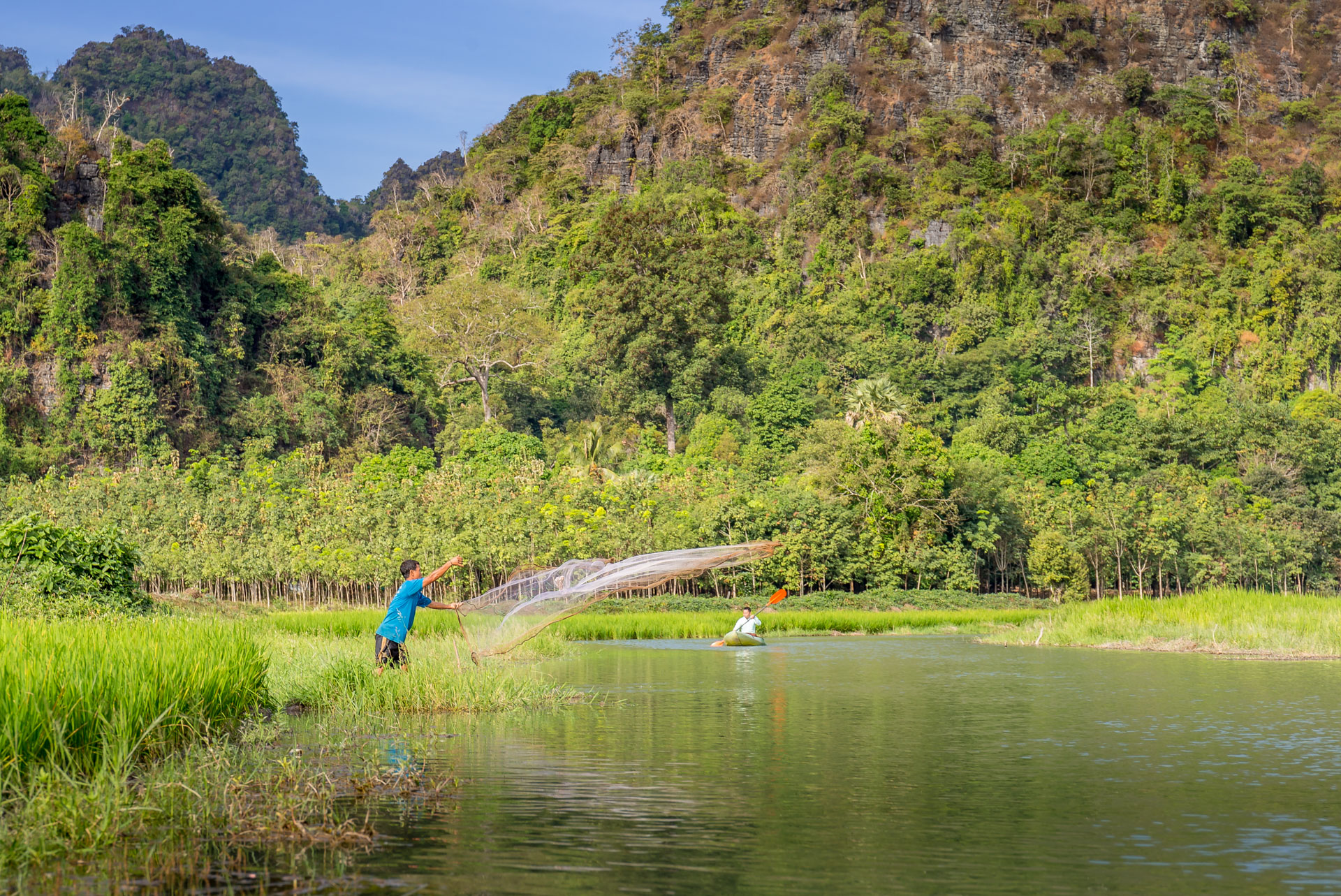 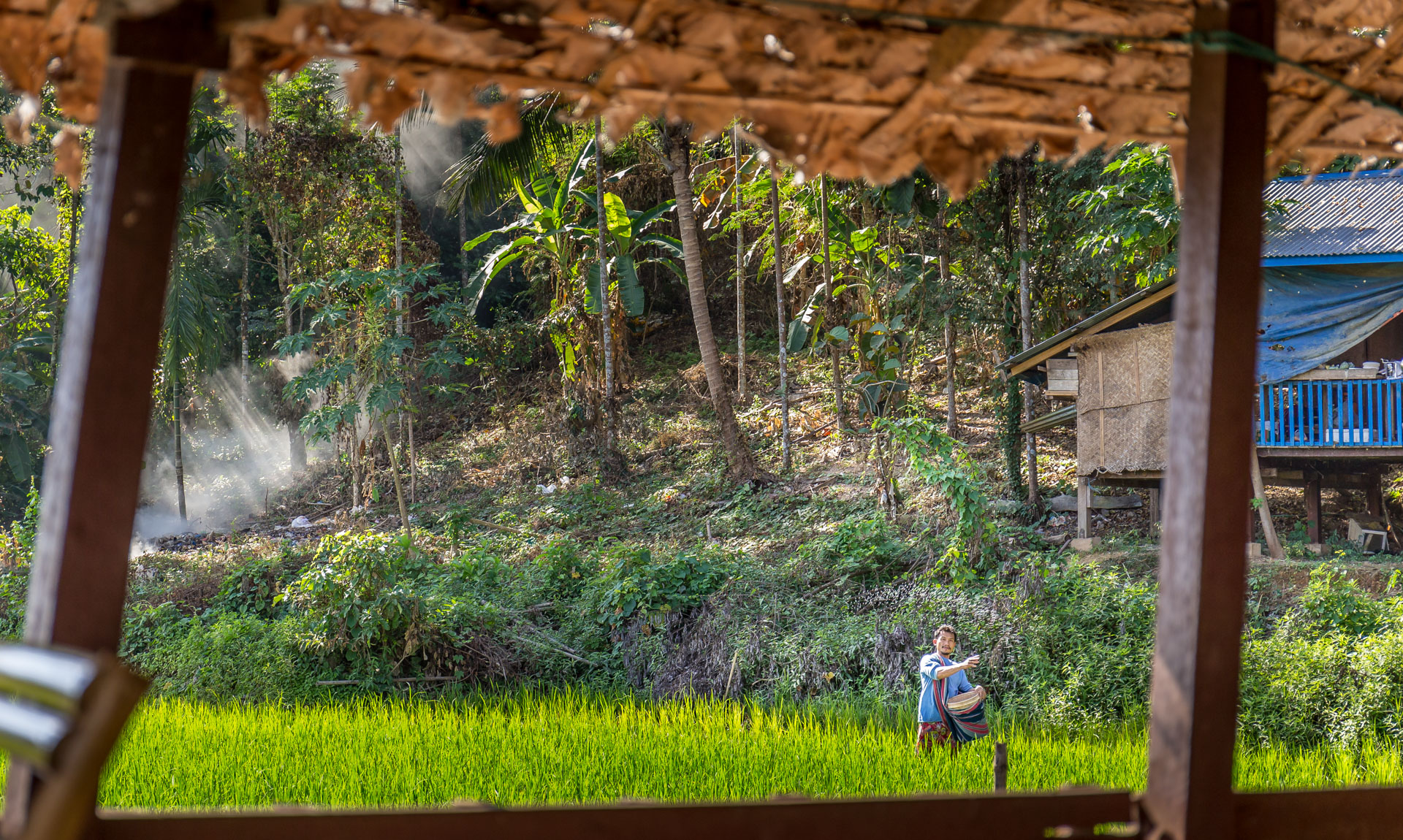 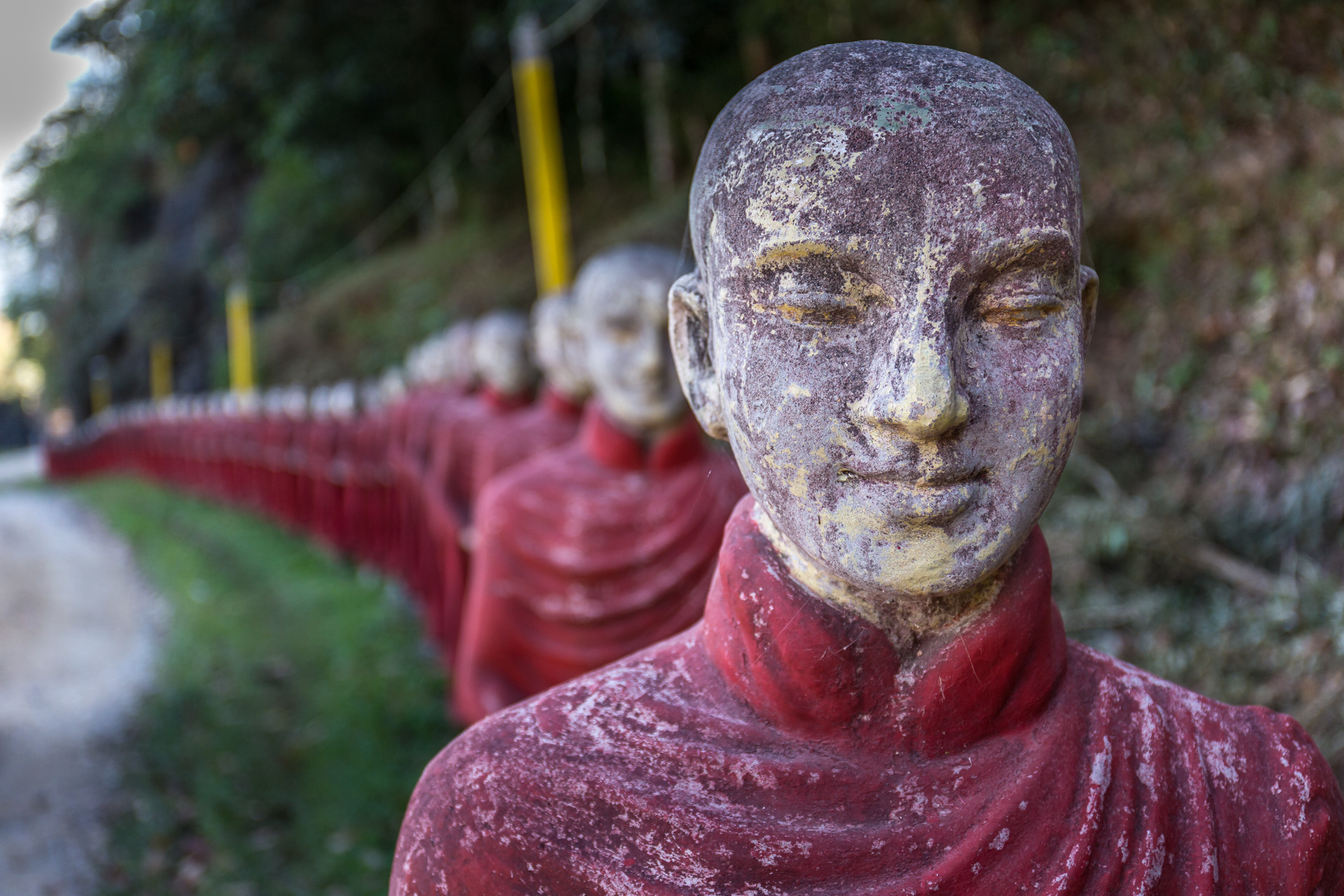 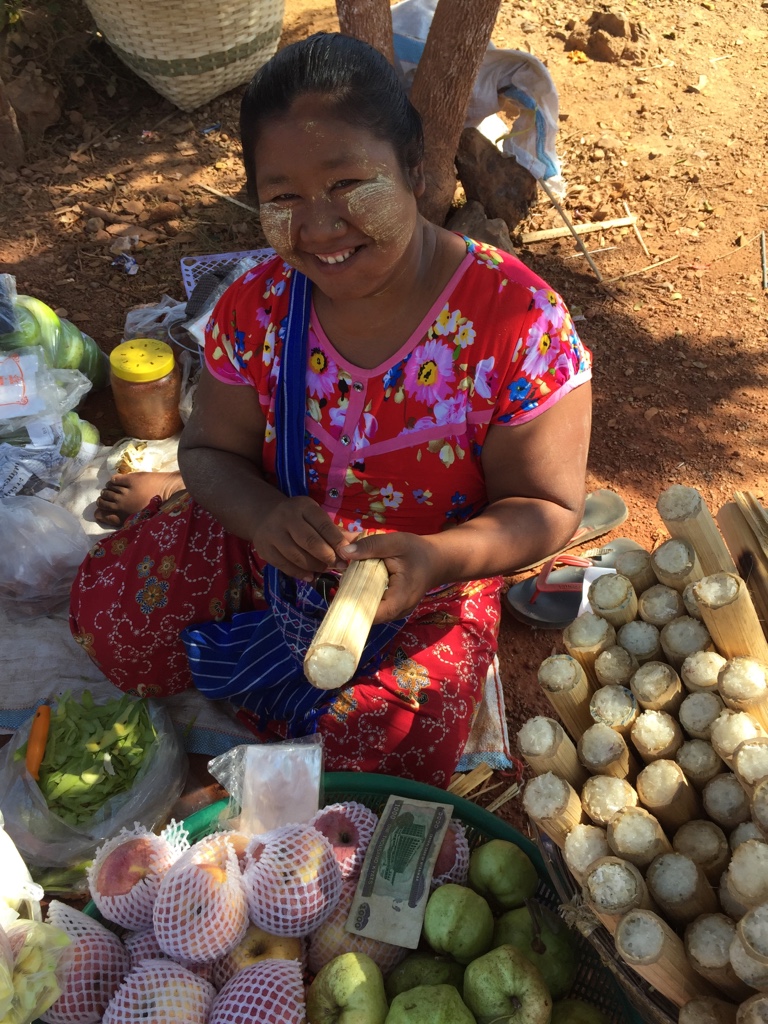 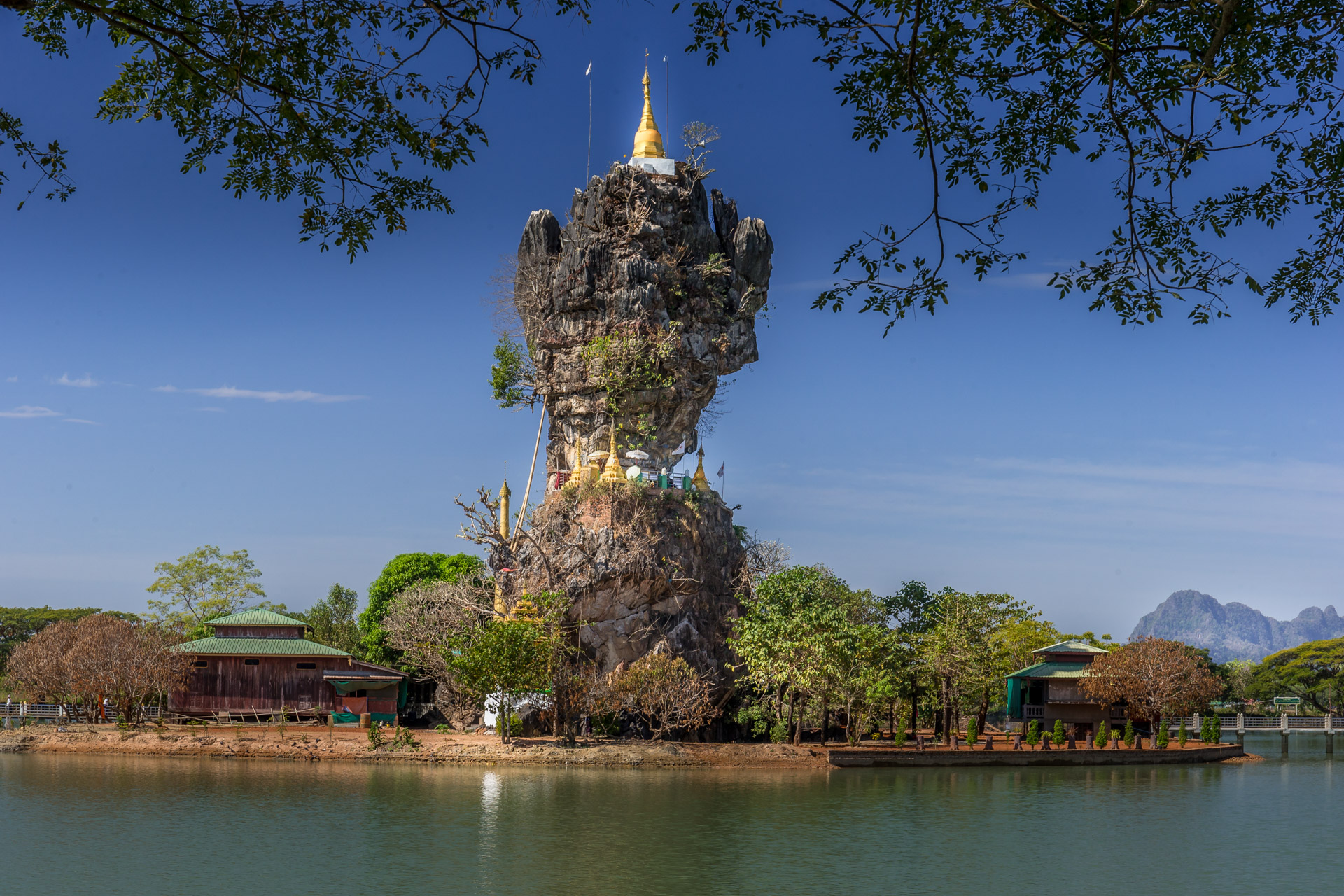 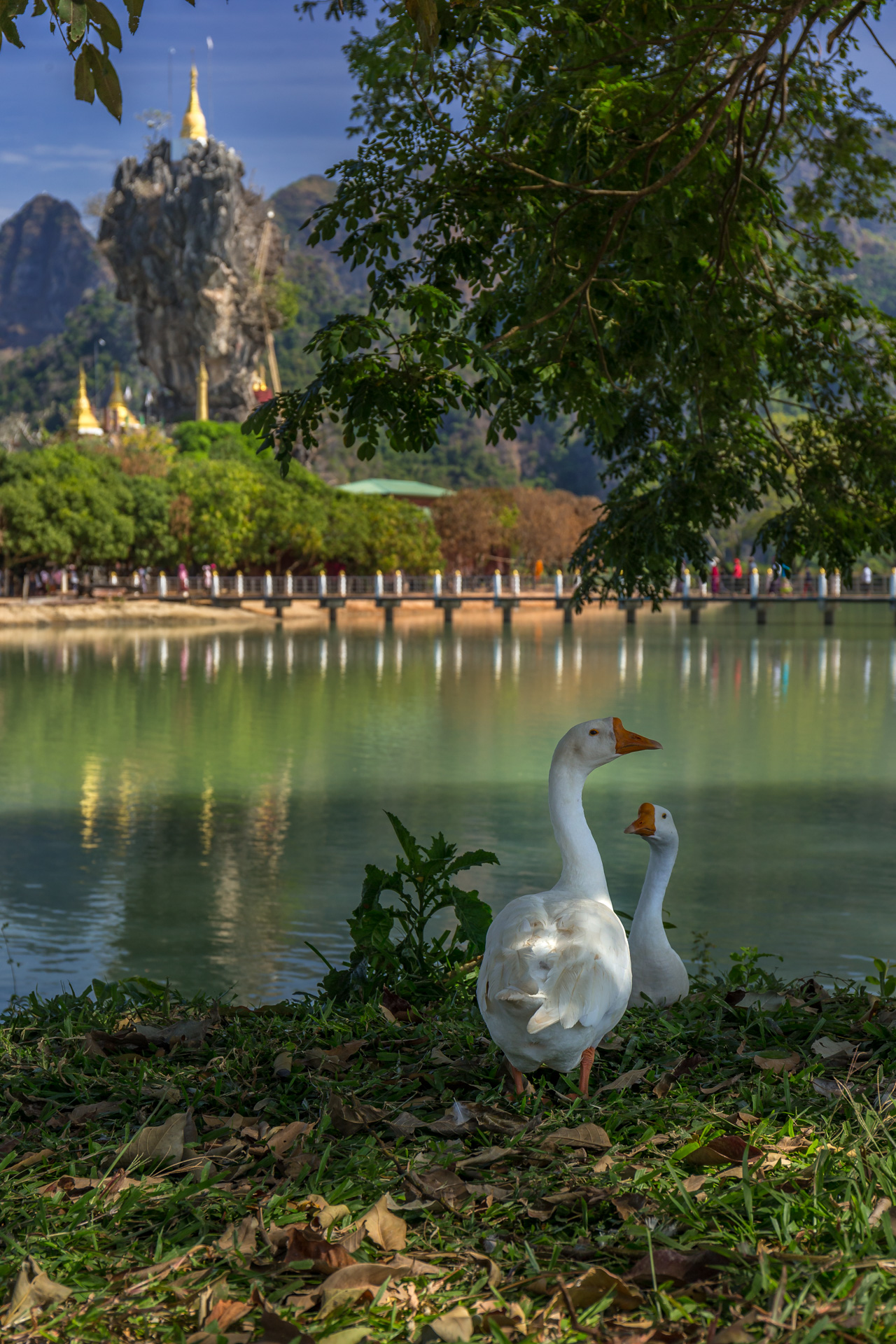 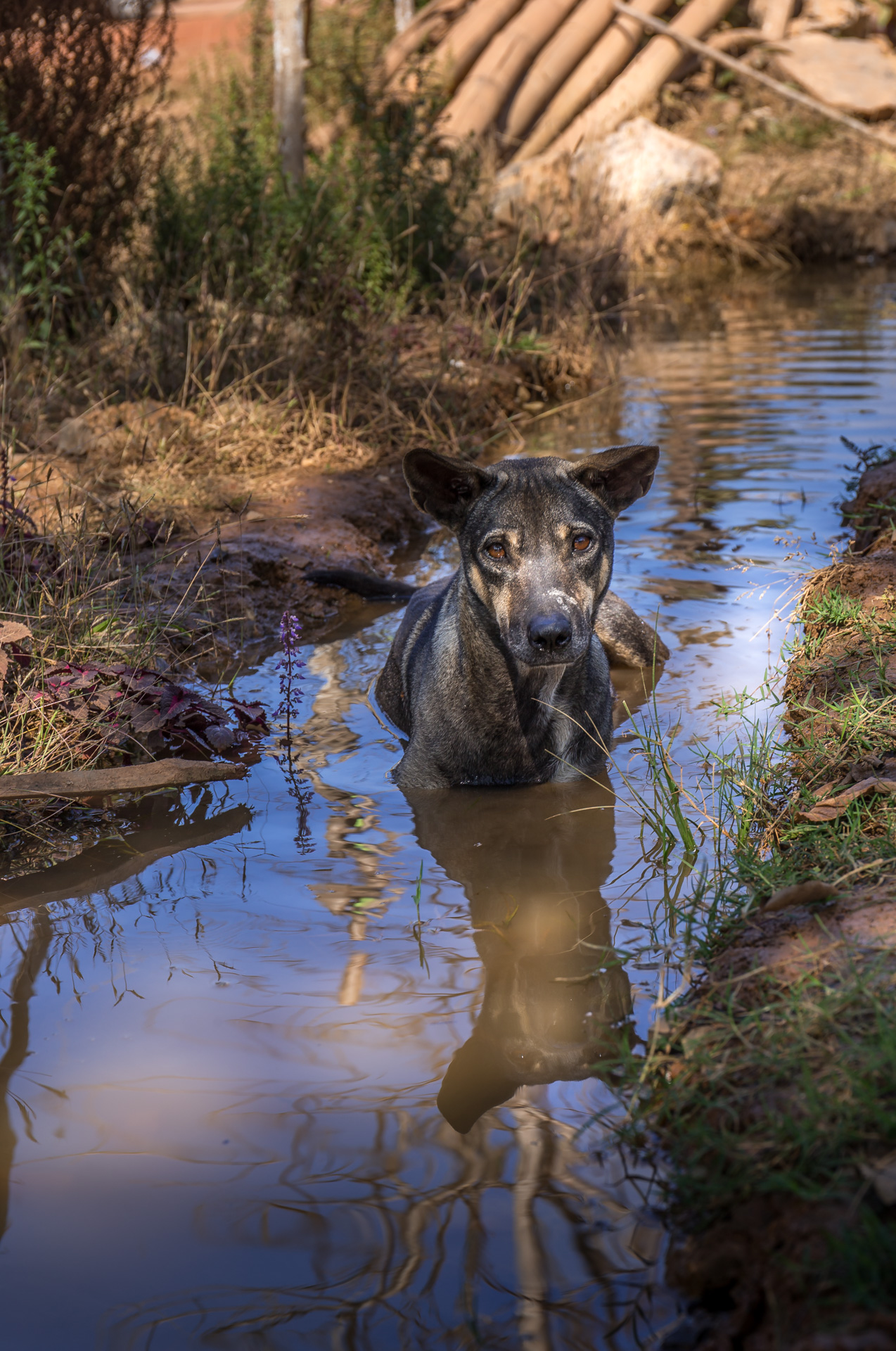 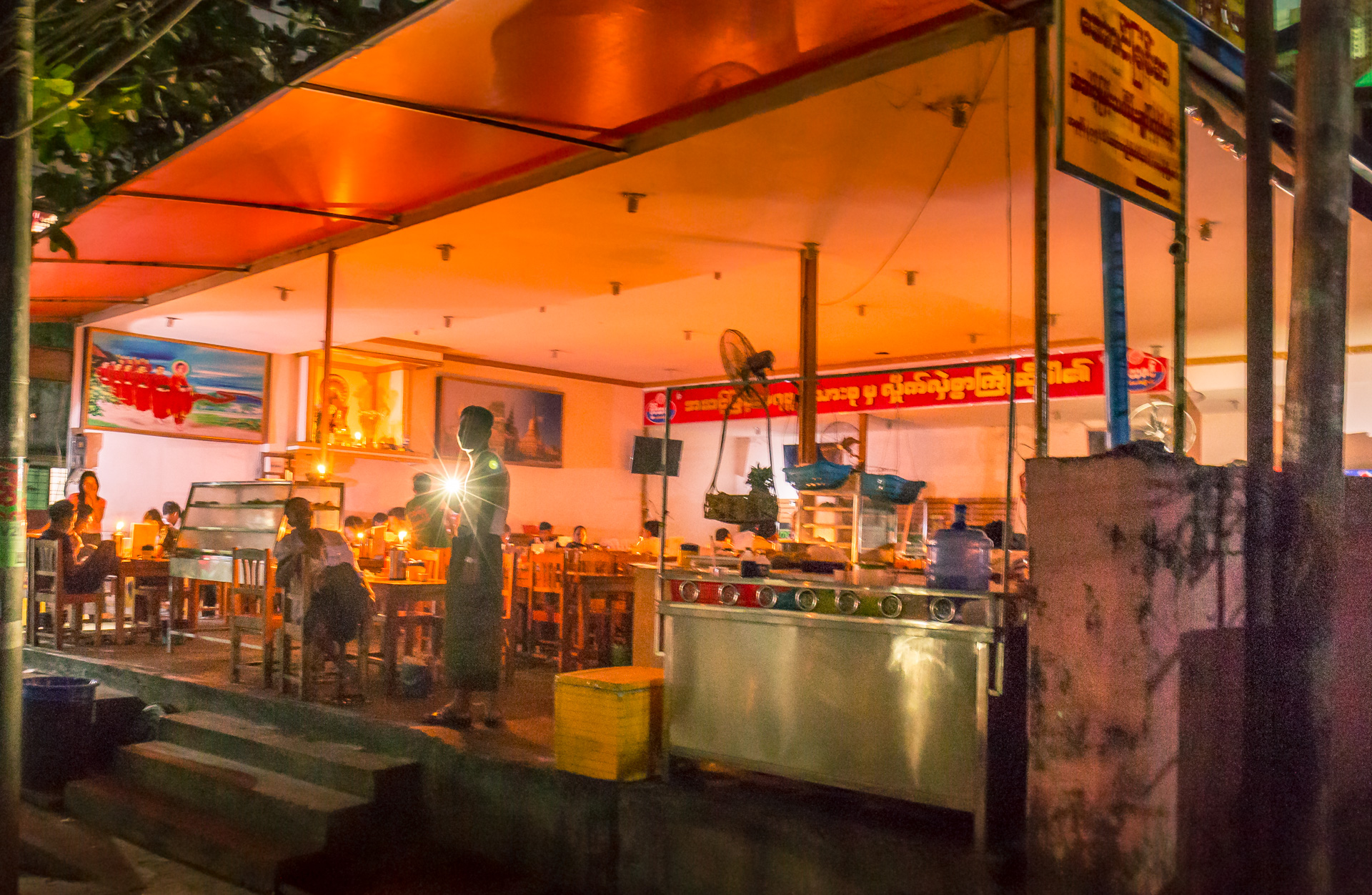 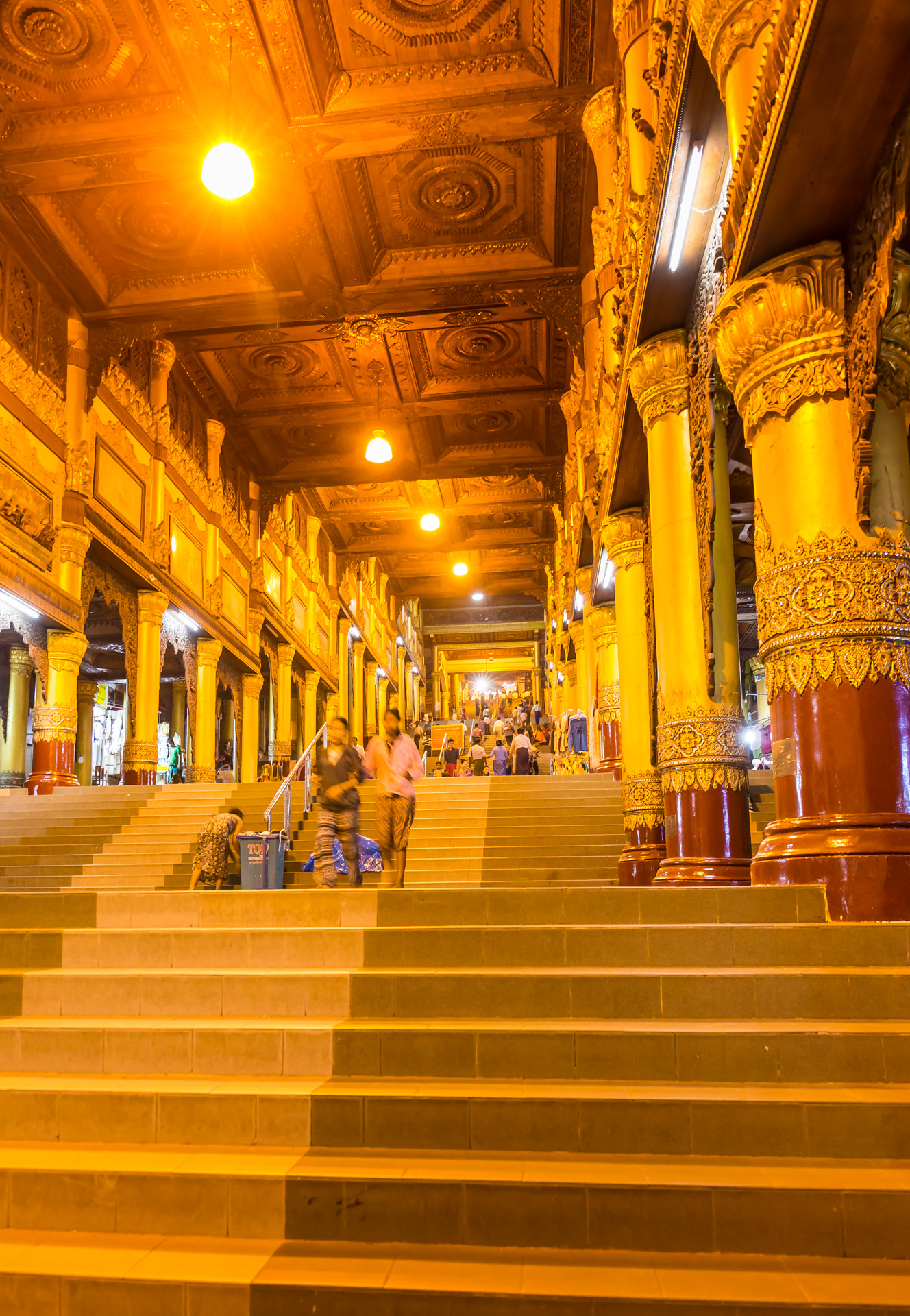 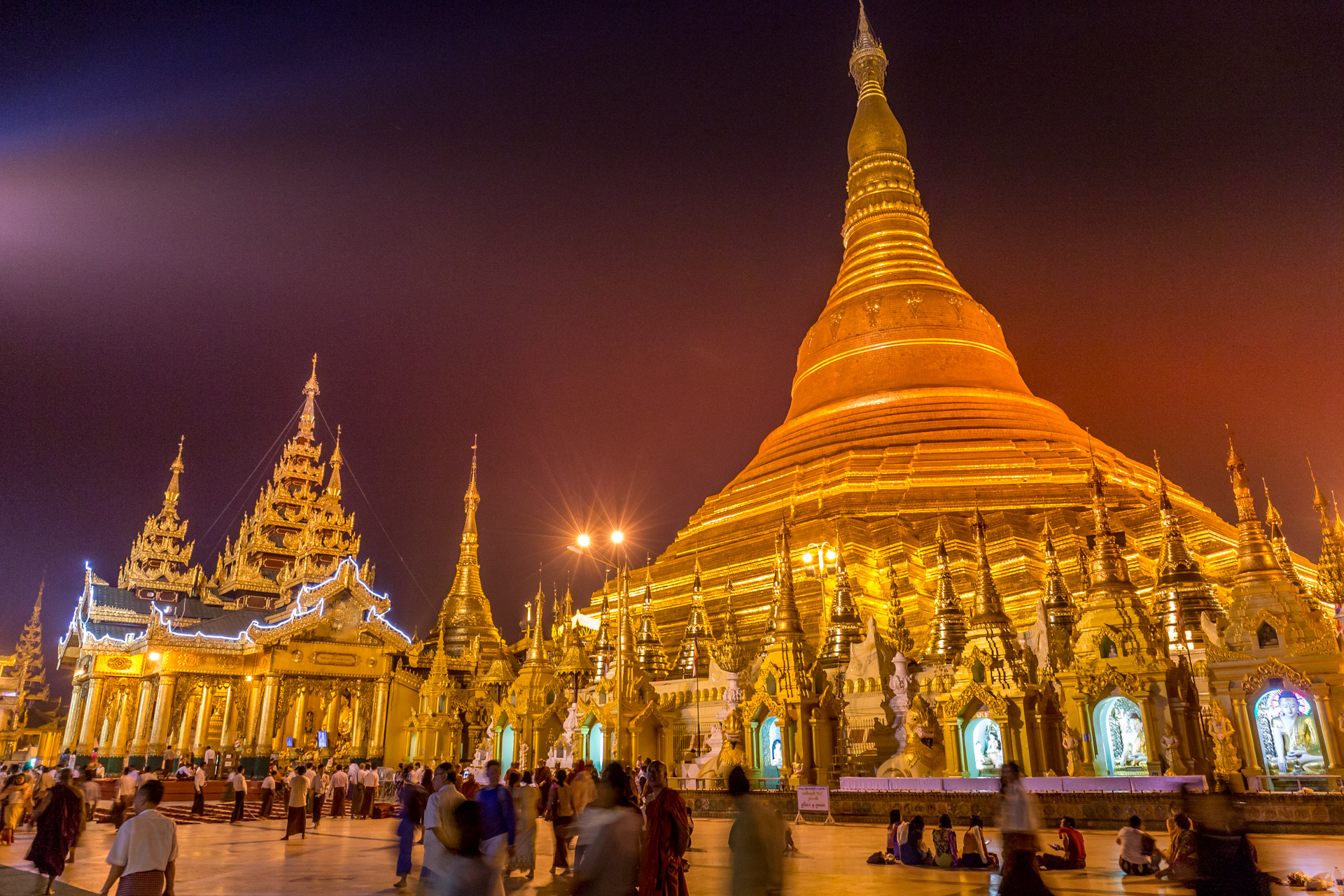 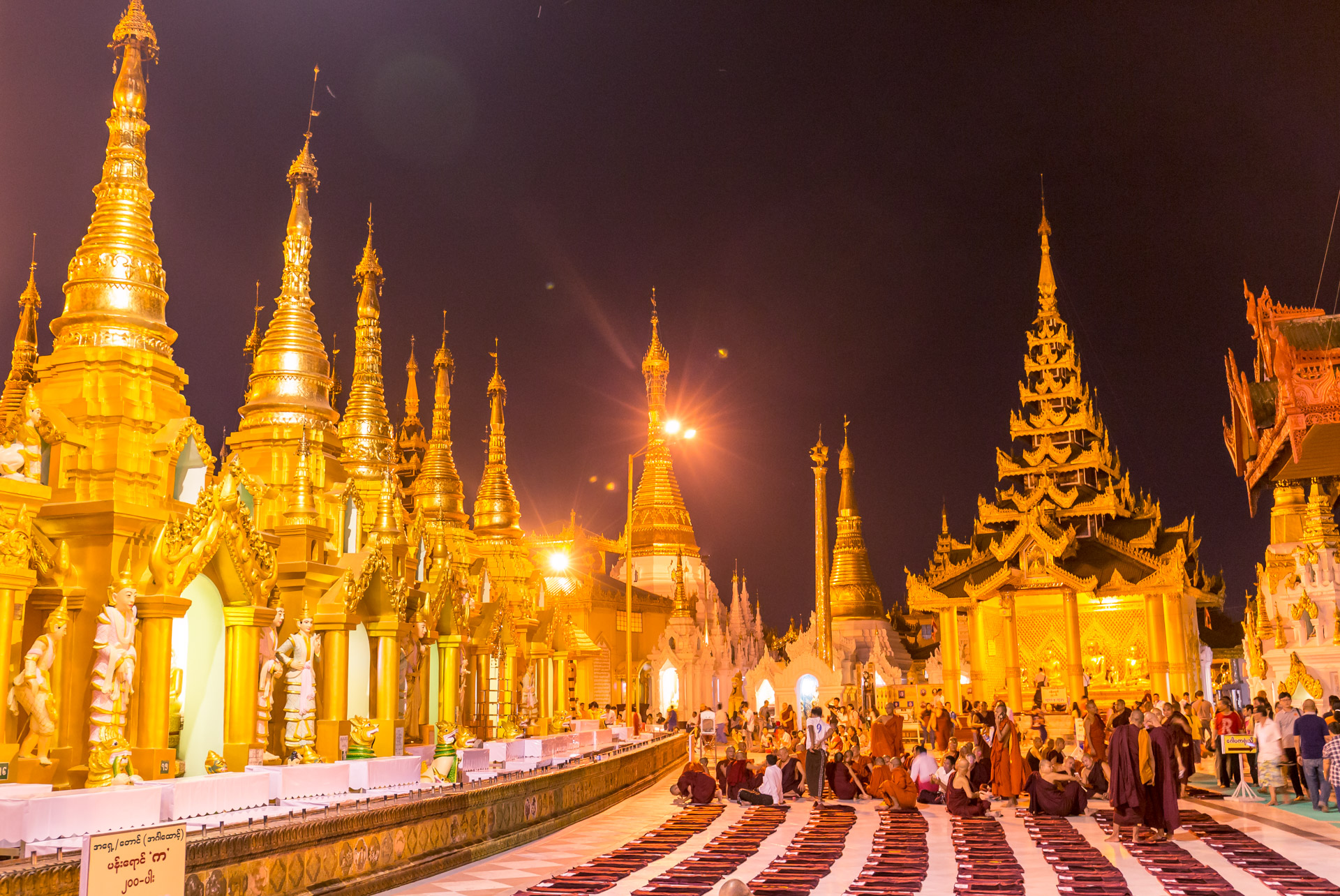 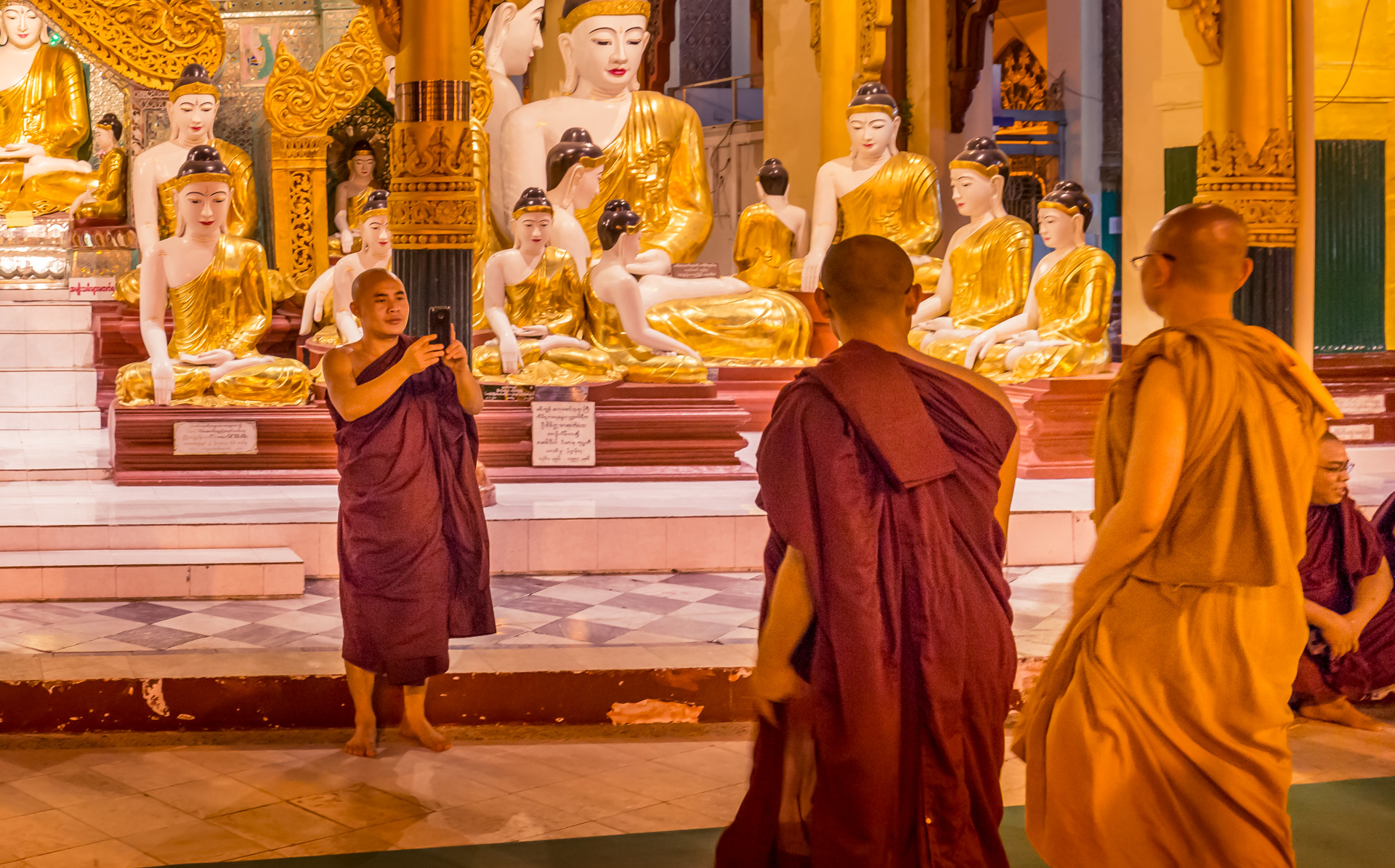 Today is our last day in the South. It’s sunny and after a great breakfast with yummy fruit plates we are off to do some kayaking. A friendly Indian gave us the tip and Ye willingly changed our itinerary to get to Kaw Ka Taung caves. The caves impress less by the knickknack statue parc than by the clean pool, the nice restaurants and the bustling local crowd (almost no tourist here).

The rice fields are so pretty to see and early morning is already a busy time for everyone. Farmers tending to their crops in a very traditional way and fishermen throw their nets from the waterside.

We were surprised to not see more ox carts or ploughs pulled by animals. Most seem to be manual human labor.

Driving along some unpaved roads with lots of pot holes, we arrived at Kwa Ka Thawng cave (there are many different spellings for the same locations) and decided not to look at another cave that had disco lights visible from the outside, instead we walked to a small village at the end of a path where supposedly kayaks were for rent. Tourism is still in it’s infancy here and so only a small hand painted sign led us to the farthest of all stilt houses on the little river. Without Ye asking several times on the way we would have never found it.

It was a deligtful morning paddling through the canals, between the rice paddies, with flocks of birds all around us. Little kingfishers, white herons, and grey stork like birds. It was very serene until the monks chants for more donations started. Those always can be heard from far away. It was a very picturesque and lovely spot. We were getting used to being the only tourists and after a cup of tea wandered back, being photographed again several times by locals.

One tradition here that can be seen each day is the monks collecting food for the poor and themselves. They go around the villages and everyone who can gives something. Monks eat only breakfast and lunch. No dinner.

To honor those monks Kwa Ka Thawng Cave and pagoda have a row of at least 150 stone monks that span from one pagoda all the way to the next. Each one looking identical until you get to the first one. Some have been freshly painted, some are very withered. depending on volunteer time and donations. The restaurations progress in small increments here. Each renovation task has it’s own donation box.

Now it was starting to get really hot and sticky. 30 degrees at least. Even the dog felt he needed to cool down.

Luckily our car has aircon, so it was a nice change from the outside. Slowly we made our way through some picturesques villages. As always in countries with majority Buddhist populations, dogs, cats and other animals are roaming free and wherever they want to lie and sleep, everyone is nicely driving around them. Very considerate. You want to make sure you don’t run over your relatives from a previous life.

Our next stop is a very bizarre place. Kyauk Kalap is a rock needle that someone built a pagoda on top. You can only reach the top by impossibly steep ladders. That part is closed to the public but you can go onto a platform about half way up. The upper part of the rock is perched in a way that makes you wonder if it falls down any time. Like the golden rock, this one has also a (magic) hair of buddha inside the top pagoda that holds the balance and keeps the rock from falling down.

Some smaller pagodas have been built around it and an artificial lake with huge carps in it surrounds the whole little island. It is both picturesque and surreal.

Back at the car we know we have a six hrs drive to Yangon in front of us and need some food to sustain us.

With Fish Noodle Soup yesterday, today we wandered through some local street stalls in search for the next unknown (but appetizing looking) treat. We tried sticky rice and really like it. Fried rice is pushed down bamboo sticks, mildly sugared water is added and the whole is left in there for a day. Then you peel away the hard bamboo outside and a roll of sticky white rice emerges, thinly wrapped in soft inner bamboo skin. There is a particular pleasant flavor to it and we ate it as a very nourishing snack.

After several hours drive in light traffic, we hit Yangon city, Myanmars laregest city, but not its official capital. First impression : what a huge traffic jam! What took us like 1 hr for a few kilometers was the evening commuter traffic. Busses everywhere, that seems to be the only form of meaningful public transport. Surprisingly very few motorcycles and no air polluting Tuk Tuks. The air quality was surprisingly good.

Finally at our hotel we just checked in and headed out to our evening adventure, The Shwedagon Pagoda. There are really no words that can adequately describe this pagoda complex.

First of all it is huge. The sheer size of it is mind boggling. Then all the different smaller pagodas around the main one. Each is dedicated to one story how Buddha found enlightenment. There are hundreds of such stories and one can’t keep track of them all. Some areas are for men only. Many of the buddhas, pagodas (also called payas) are gilded in dazzling, shiny gold leaf. The whole complex has four main entries, one on each side. Each entry itself is spectacular. Long covered steps with intricately carved wooden ceilings lead up to the main paya. The steps are lined with shops from medicine to clothes to souvenirs and food. Walking some 100 steps up barefoot makes you feel like a pilgrim as well.

Up on the pagoda complex the atmosphere is both serene and joyful. Some people are in deep prayers, others look more as if they are on a sunday family outing. Kids runing around laughing and fathers telling the individual buddha stories to their families.

A very memorable place. We wished we could have seen it by daylight too. Nevertheless should we come back we will spend more time in Yangon. Finally we were able to upload our first blog entries, as very slow internet made it impossible so far.