Wadi Rum – in the Footsteps of Laurance of Arabia (Day 5) 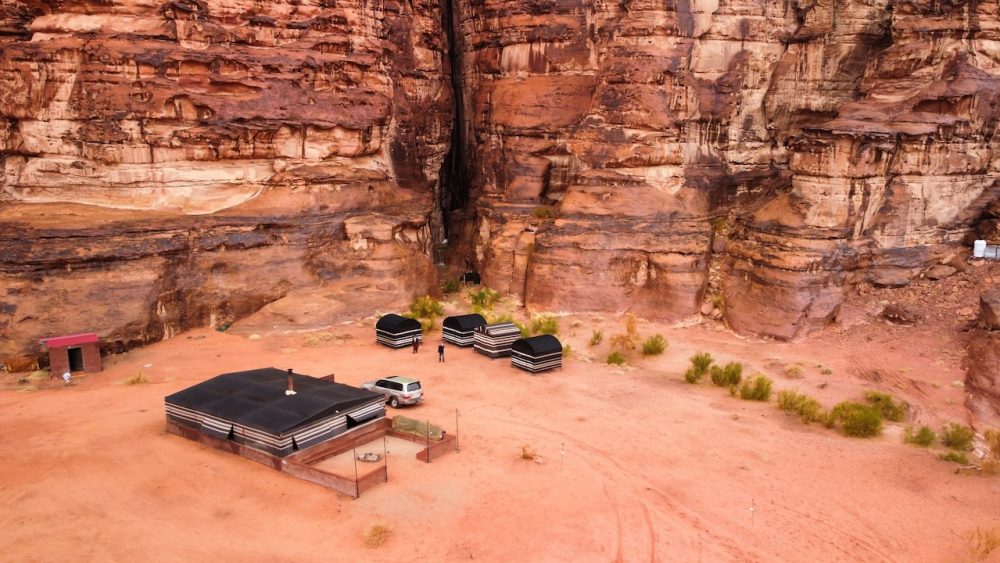 The night was freezing cold in the desert. Despite very good sleeping bags we had to don socks and fleece jackets to sleep. When we woke up it was a big surprise to see our surroundings for the first time.

Our small camp is at the foot of a rock wall and looks out onto a large Wadi. Shivering we all met in the big tent around a wood fired stove to warm up a bit. We had a hearty breakfast with fool and hummus (yes it’s really called fool or even foul, it’s a breakfast dish made with crushed white and red beans that originated from Egypt). Wadi Rum is a very large protected area on the border to Saudi Arabia. It mainly consists of Wadi’s (Valleys that serve as river beds during rainy season) and rocky mountains that aren’t very high but look like gigantic boulders strewn about.

No palm trees, no green, just dry brushes and tire tracks everywhere. We saddled up our horses and set out for a first exploratory ride. The horses were motivated and forward. Some of the riders struggled with holding their horses back when we cantered and gallopped. Chris got the most calm mount while Esther had a hot little mare that always wanted to go faster than the herd, shaking her head when she was not allowed to.

We had a nice outing in sunny weather and were back for lunch at the bedouin tent for a scrumptious lunch of local salads and local dips. After some very sweet bedouin tea we set out again for another stroll on horseback. There are very few tourists in the area as it is off season.

We saw many camps that were entirely empty as they had received a large number of cancellations due to Covid as well. We saw a few 4WD groups, a few rock climbers and a camel safari, but other than that it seemed to be the occasional local traffic from one family to another.

Back in the camp after having unsaddled and brushed the horses, we were delighted to find out that due to the sunny day, we had hot water (heated by the sun) for some quick showers. Night fall is early in winter, as early as 5 PM. That evening we had a delicious rice dish with a tomato sardine sauce. We popped open some of the beers we had brought from Aqaba and had a very nice relaxing evening. We were coming together as a group and the atmosphere was good. Dinner was a quick affair, and we were all tired from so much fresh air that we retired by 9 PM for a much milder night than the one before.